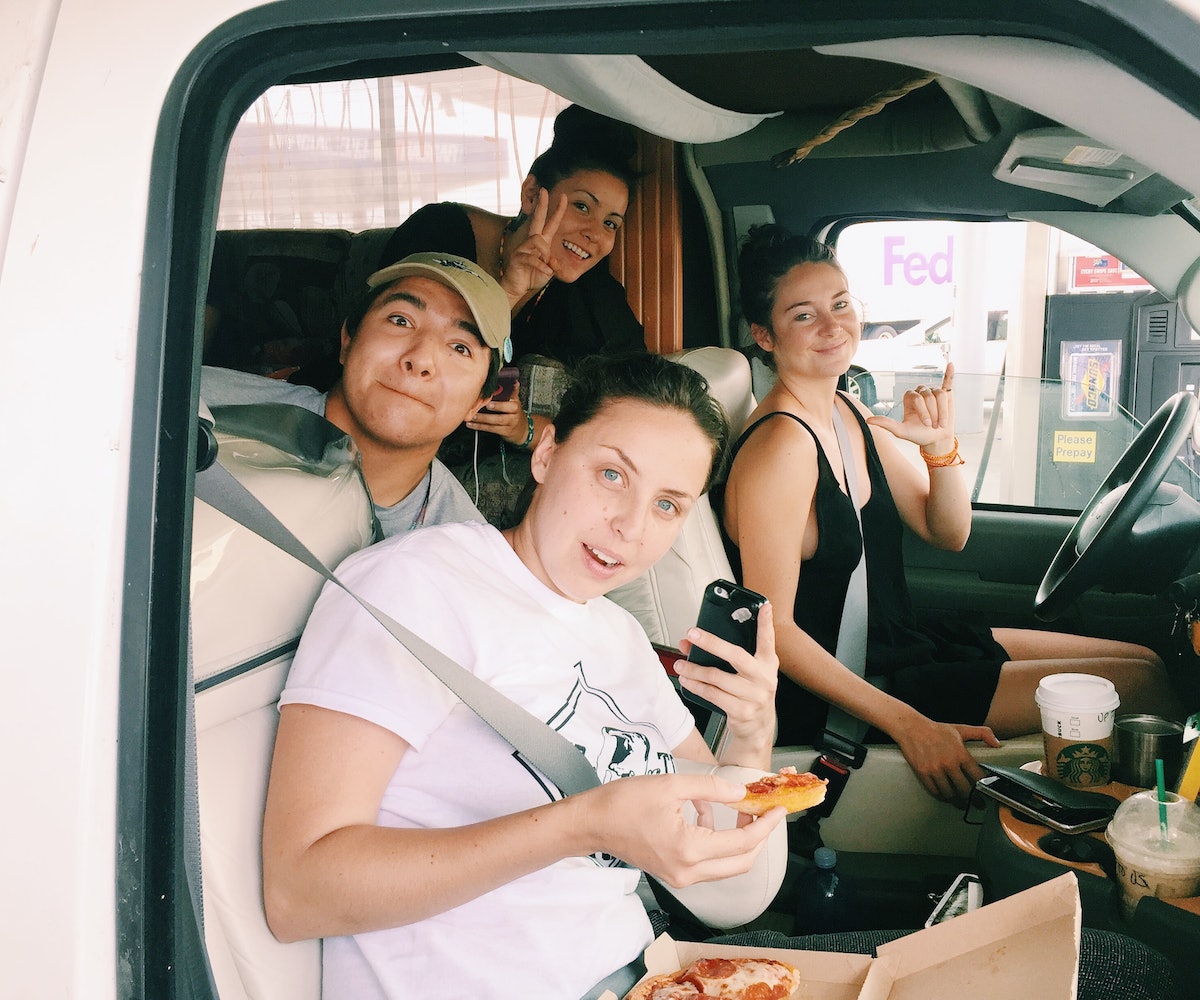 Three weeks before the start of the Democratic National Convention, Shailene Woodley—along with five of her most organized and loving friends—started planning a caravan to the DNC, which Woodley envisioned as being a “modern day peace train.” The Up to Us caravan launched two routes departing from the West Coast: One starting in Los Angeles, one in Portland, Oregon; both stopped in multiple cities to scoop up more travelers. Along the way, community-organized events welcomed them to raise awareness around local issues and tie these into the national conversation. People often showed up at the caravan with nothing but a backpack and the hope for a better world; then, they’d link up with someone who had an empty seat and head to the next stop.

Perhaps the most powerful aspect of the caravan happened late at night: Whether on campgrounds, vacant farmland, or in the backyard of a kind soul; while gathered around a campfire, laying on the bare ground, or sitting on a porch swing; everyone spent time learning from one another, sharing stories, meeting people from different walks of life who are directly affected by issues like immigration, racial injustice, income inequality, the destruction of native lands, access to clean water, and many more things. What started as 30 cars became nearly 200 by the time the Up to Us caravan rolled into Philadelphia.

We caught up with Shailene to ask a few questions about how to get involved in changing America’s future, what makes millennials politically motivated, and why she thinks America’s future is Up to Us.

Tell me about Up to Us.

Up to Us is a movement by and for the people that was originally started because of a craving to keep people politically engaged and active. This current election, there are a lot of people feeling defeated and hopeless and like their voices aren’t represented or heard. And then it became very apparent to us with the eruptions of violence happening all over the world that this couldn’t just be a political revolution, it had to be a personal revolution, and the only way to see change is if people stick together. But it’s really a movement of empathy. It’s about bringing awareness to situations that are foreign, that are outside of our own. To me, Up to Us has become a caravan of peace and a caravan of love, or a movement of peace, a movement of love. My greatest hope for this movement is to encourage people to begin relating to one another.

What kind of changes would you like to see the U.S. making over the next ten years?

I think a huge major change is that the U.S. would openly and directly address racism. These things are beginning to happen but there is such a long way to go. We need to have conversations about segregation and violence toward the LGBTQ community, toward women, toward Native Americans, toward marginalized communities. I see America being the leader in the world when it comes to climate change. I see America’s foreign policy changing a lot. I see the NSA disclosing honestly and truthfully what they are doing in terms of mass surveillance. Outside of government, I see the American people understanding and being more accepting to one another, having conversations, and integrating diverse communities. I think integration without trying to conform is incredibly important. I think we need to recognize the cultural differences between races, between genders, between religions. That is what’s ultimately going to bring us together.

What do you think about the misconception that millennials are lazy, entitled, not working hard enough, and should just give up?

It makes sense that that narrative is out there—of course they want it to be about millennials, because the establishment out there right now is terrified of millennials. Millennials are standing up and saying, you’re killing our planet—WE’RE killing our planet. We’re killing culture, we are killing diversity, and no one is doing anything about it, so we’re going to. So, of course there is going to be a mainstream narrative that’s out there trying to suppress that which is rising. And that rising is the revolution. Thankfully, millennials have social media and the internet to connect and I think, in a big way, that’s keeping this revolution civilized; that is keeping this revolution peaceful. I see those narratives and I just laugh because in any generation you are going to have people on the front lines and you are going to have people who aren’t. That has nothing to do with age, it has nothing to do with gender or ethnicity, it has to do with a human being. One thing that I think the system underestimates is that most young people are technologically savvy and we’re our own investigative journalists. I think we’re going to see big changes when it comes to mainstream media in the next few years. People are done being told what they should think.

How do you stay positive and bring peace to such a corrupt establishment in a convention that doesn’t feel like it’s doing the right things for us. How do you move forward?

I feel like I don’t have another choice, just for my own sanity. If I woke up every day with anger that turned into hate or anger that turned into tangible dislike or discontent, I would be a miserable human and I don’t want to lead a miserable life. Selfishly, I think it is really easy to wake up everyday and say, “Fuck all these corrupt politicians.” But in the same way that they forget about the suffering of the 99 percent, we forget the suffering they endure. We don’t know their childhood, we don’t know their family situation, we don’t know what goes on in their head. I think the only way to relate to them and to understand why they make the decisions they make, is to show up and say, “I’m the person you are directly affecting.” You can see the tangible struggle in people where they want to support causes and yet also feel like they have to feed their family and they have to do what they have always been doing and there’s no other choice, there’s no other way. I honestly don’t know if they’re that greedy, I just think that they don’t know. You put any of them in the shoes of someone directly affected by the decisions they make and I think that’s going to change. I think the only way we’re going to change our country is if we visually and physically show up.

What can someone do if they can’t physically show up; they can’t be in Philly or they can’t go to a Black Lives Matter march? What can they do to still be involved?

Have conversations with their local community; that’s democracy. Democracy is not agreeing with one another, but having healthy debates. It’s being empowered by knowledge. I think the greatest tool we can give ourselves and give the world is education. We have the ability to empower ourselves and connect with what feels right for us. I think that is the easiest way for people to get involved. By educating yourself, the next time you have a conversation with someone you can empower them with knowledge, even if they don’t agree with you. We need to dive into issues that resonate with us and find out what our passions are and become knowledgeable in them so that we can spread that awareness.

How can people find out more about the Up To Us caravan?