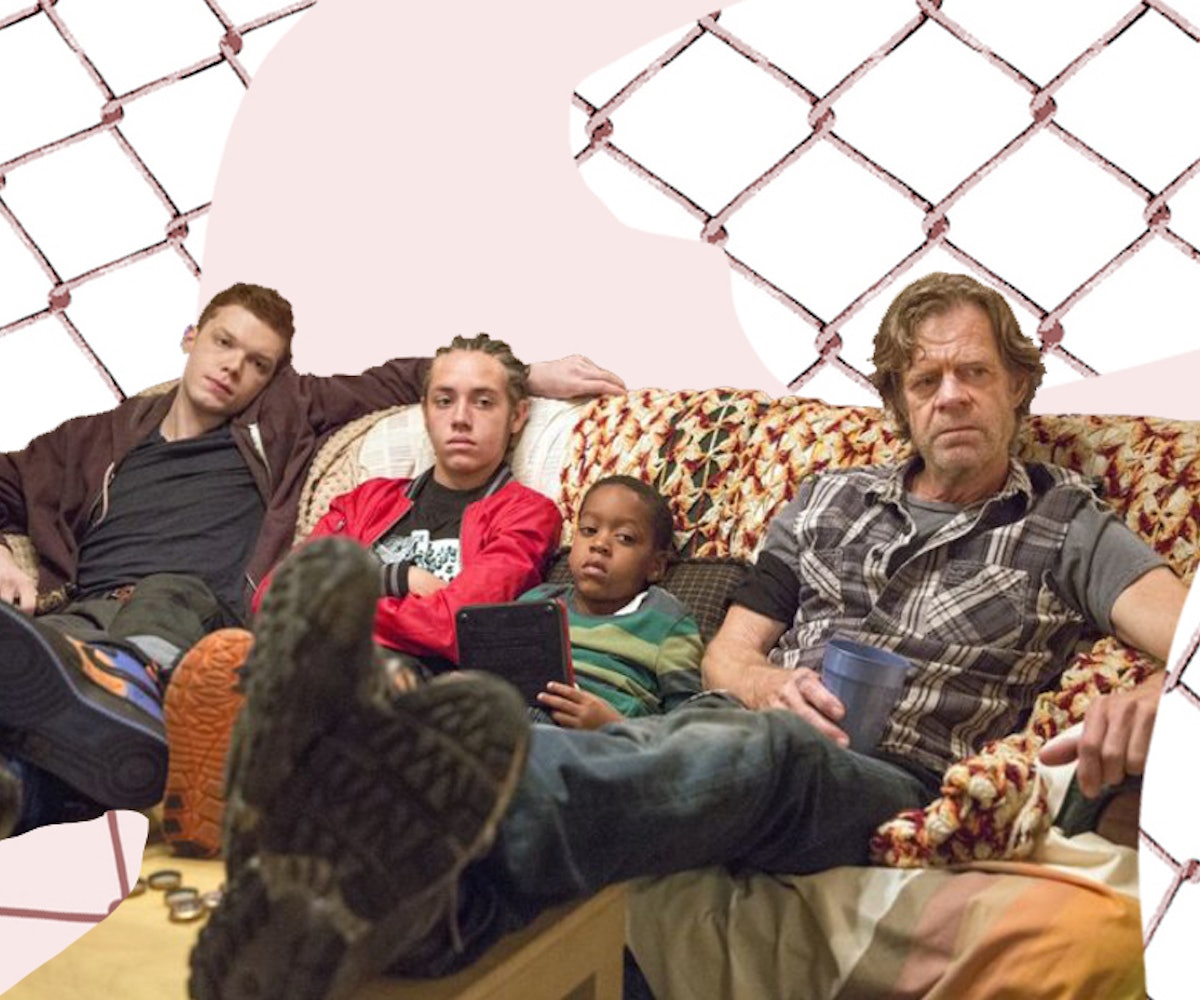 The 2011 premiere of Showtime’s Shameless, an American remake of the British series of the same title, opens on a debaucherous outdoor party in a lower-class neighborhood, with an illuminated Chicago skyline in the background. A voiceover from Frank Gallagher (William H. Macy) introduces his six children, most of whom are underage yet continue drinking their beers as the police arrive to break up the gathering.

I didn’t watch that premiere in 2011. In fact, Shameless is a show I casually threw on just last year when I was out of things to watch. But I was immediately hooked on the Gallaghers’ brand of chaos, lawlessness, and familial conflict—a brand that harkened to my own upbringing. In fact, it was such a brilliant and terrifying distillation of the world I knew, one I was wary of inhabiting again, that I considered abandoning it immediately. Instead, though, I kept going. One week-long Netflix binge later, I was five seasons deep, emotionally wrecked, and unable to remember what life was like without the Gallaghers.

For seven seasons, the show has been lauded for its depiction of what it means to be lower-class in America, from the perspective of a white Midwestern family. The show has sparked conversations about race, poverty, class, queerness, sex, and addiction, and it’s easily become one of the most important shows on TV.

If there’s one connective thread in Shameless, it’s that being poor and being an addict go hand in hand, and the world tends to ignore you if you’re either. The Gallaghers, like so many families in their economic class, are always searching for a magic bullet that has the power to drive them out of poverty. Each time they come close to success, the universe is all too happy to push them right back down. While the oldest kids Fiona (Emmy Rossum) and Lip (Jeremy Allen White) concoct money-making plans with the family’s best interest in mind, their father devotes most of his energy to the next “get rich” scheme that can score him more booze. These schemes have included defrauding the government in order to spend his dead aunt’s money, faking disability, housekeeping for dying cancer patients, and marrying a grieving widow.

These absurd plans are carried out with comedic hijinks a la It’s Always Sunny in Philadelphia, but are punctuated by heartbreaking moments of clarity that make it impossible to ignore the lengths people go to for financial security.

When Lip is on the verge of being kicked out of college, unable to pay his $12,000 tuition balance, he pleads with the financial aid officer to let him stay: “If I go back to that house, then I’m in it, and I can’t get back out.” This is a tragic realization that the only thing keeping Lip from the criminal life of his family is distance. He knows returning to that neighborhood means returning to the lifestyle he just managed to escape. And when he does leave school the following year, our worst fears are realized as Lip falls back into old habits and picks up a few more from his deadbeat father. Though Frank is the official addict of the show, drugs and alcohol are an immovable force in the life of every Gallagher, and no one is ever truly safe from their effects.

If anyone seems able to resist their allure, it’s Fiona. With no qualified parental figure in sight, Fiona is often tasked with literally and figuratively holding the clan together. In the pilot, her hookup is interrupted by cops bringing her unconscious father to her door. When her date understandably bails, and the room is finally empty, she allows herself to cry for just a few seconds. She then wipes her tears and heads upstairs with a bottle to feed baby Liam. This is the first of what will be many instances of Fiona ignoring her needs, wants, and desires to carry out the maternal duties she never asked for. We’ll soon learn that those tears are more about a long-held resentment than a momentary frustration.

The responsibilities placed on Fiona at age 16 didn’t suddenly transform her into a model of domesticity. She’s still, first and foremost, a young woman living in poverty, with more access to drugs than education. She incessantly messes up, because she doesn’t seem to know how to do otherwise. It isn’t about a lack of caring—it’s about having no idea how to drag yourself out of this hole, let alone a family that’s depending on you for their livelihood. It proves that the bonds of a family are the most difficult to break, even when not breaking them is devastating to your own life.

In the little bit of time she gets to explore her wants, she doesn’t exactly make the best choices. The men she’s chosen include a car thief, her boss, a musician she married after a couple of weeks, and a heroin addict who was also her boss. She doesn’t know how to love, compromise, or share her life with anyone worthy. Fiona seems doomed to repeat the same toxic relationships of her parents because it’s all she knows. The only thing she’s able to give to these men is sex, which she gives freely and often.

One of the things the show has done most skillfully is its portrayal of its gay characters. When Ian (Cameron Monaghan) is diagnosed with bipolar disorder, the same illness he watched his mother suffer from, it’s easy to forget that he’s also gay—something that would, on any other show, be his defining characteristic. Instead, the writers show that he is as multidimensional as any other character. In the most recent season, he starts a relationship with a trans man, opening up a brand-new dialogue on the show about sexuality and gender—a conversation Ian doesn’t quite know how to have. As he stumbles through awkward questions, accidental misgendering, and overall confusion, his partner Trevor (Elliot Fletcher) acts as a teacher, giving a lesson to Ian and many Americans all at once.

For all the things Shameless does right, it's one area for improvement is its depiction of black characters. Even though it’s set in South Side Chicago, in what is actually a predominantly black neighborhood, the show only has one principle black character, Veronica. (There is also Liam, who is black despite supposedly having two white parents.) Self-segregation and gentrification could be to blame, but that doesn’t explain the total lack of representation.

To their credit, the showrunners have done a decent job of adding POC into the show whenever possible, as love interests, coworkers, and friends during the course of the show. They’ve also written a powerful and intelligent woman in Veronica. She is one half of the show’s only healthy relationship and the most put-together woman in a group of misfits.

The friendship between Fiona and Veronica is a microcosm of white and black friendships. Though they are best friends, Veronica’s problems, including a battle with postpartum depression that leads to separating from her husband, are always overshadowed by those of Fiona and her family. This makes sense in the context of the show, especially given that the Gallaghers’ problems are never-ending, but it makes no sense in the one-on-one moments between the two. It’s wildly unfair to Veronica that her one confidante often has no regard for her feelings and instead, just makes every conversation about herself—wildly unfair, but not unrepresentative of the way white women lay claim to narratives of oppression.

Shameless isn’t the first series to draw inspiration from lower-class American families, and it isn’t even the only one on television right now. Atlanta takes a look at poverty and a slew of important social issues through a lens of a struggling black rapper, a very different lens than the Gallaghers have. The thing that sets Shameless apart from older shows featuring lower-class families, like Roseanne or Married with Children, though, is that the Gallaghers’ particular level of poverty is more than a punch line about a crappy couch. It’s about whether or not they’ll eat food tomorrow, have electricity turned off, or keep their home. It’s a matter of life and death.

Showrunner John Wells has said that he made a conscious decision not to set the show in the South because he wanted to defy the stereotype that only Southern people live this kind of “white trash” lifestyle. "The reality is that these people aren't 'the other'—they're people who live four blocks down from you and two blocks over.” Shameless has taken a hyper-specific set of circumstances and found the universality of them. And they’ve managed to do it without ever mocking the subjects of their story. Treating them with the care they deserve helps us realize that they’re not so removed from our own experiences.

The eighth season of Shameless will premiere on November 5, and it’s unlikely that this will be the year they get their lives together. But maybe we’ll get to see them be happy for a little while, even if it’s just the calm before another inevitable storm.