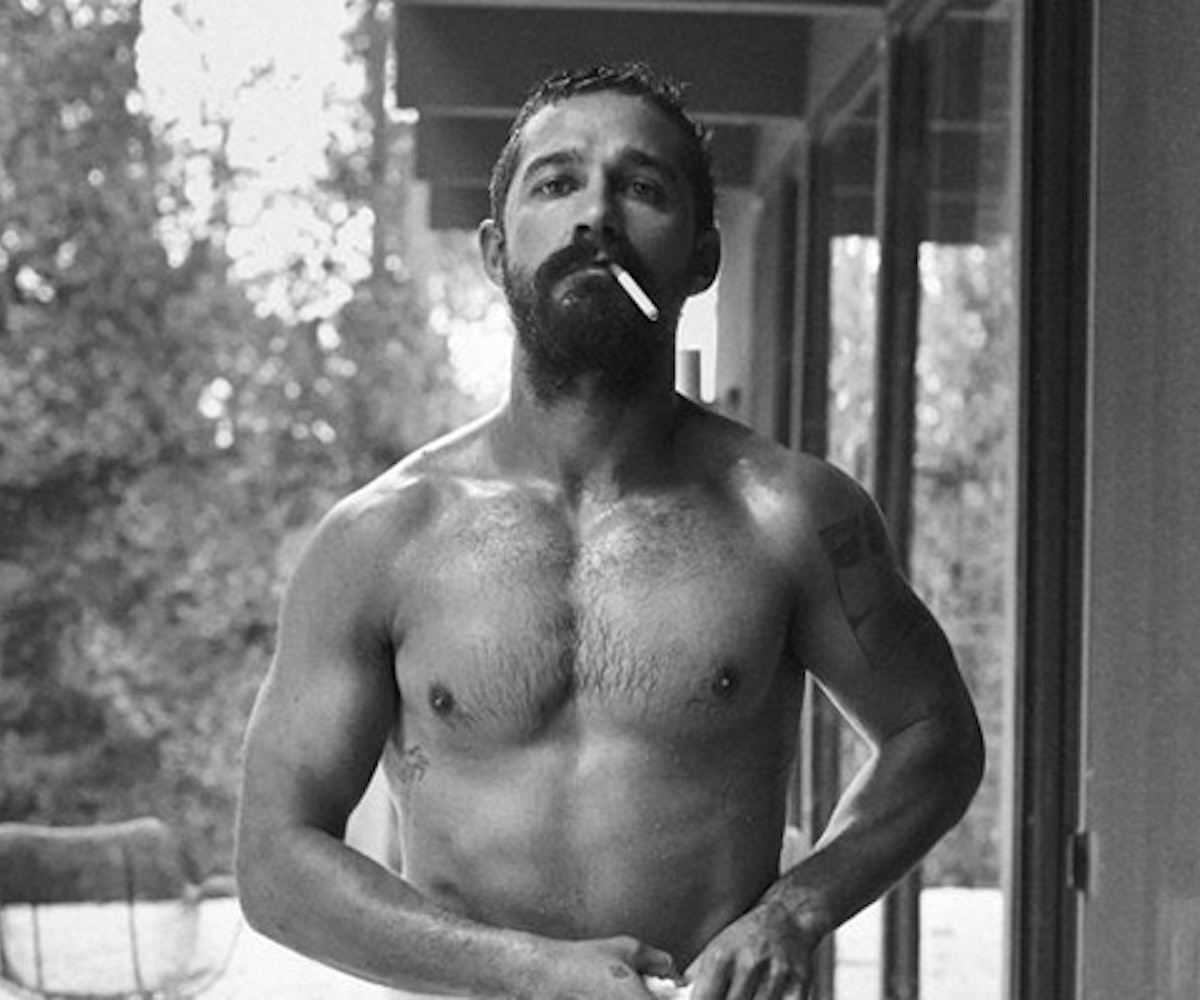 Chances are, you're not a literary character in a coming-of-age film. If our suspicions are right, you also probably haven't also had that "aha" moment—you know, the one where you realize that you have undergone a loss of innocence and will be forever changed by the events of a summer or a winter, all while some John Hughes-esque music crescendos in the background. Still, in the past year or two since Shia LaBeouf started acting...err, strangely, you may have have stopped to ponder some pretty existential questions: Whatever happened to sweet, goofy Louis Stevens? Are those Disney Channel days really over? Has he somehow traveled to a parallel universe, only to be replaced by a bizarro version? Also, why do I find Shia LaBeouf so darn attractive, even though he is clearly nuts.

Though you've probably foregone your innocence (sorry to break it to you), there is some good news: Shia LaBeouf has been method acting this entire time. In his Interview November cover story, he detailed the first time that he tried method acting, on the set of 1998's The Christmas Path. "I try to make everything as real as possible. If it feels real to me, then I can go home happy. And there's no pain worse than being bad. So I'm willing to do anything and everything," he said. "It's not good for my personal life. But neither is being bad. I'd rather be anything but bad."

Actors like Daniel Day-Lewis and Leonardo DiCaprio have ritually adopted method acting techniques to bring their characters to life, moving them forward towards multiple awards and accolades. But other actors, like Joaquin Phoenix, Anne Hathaway, and LaBeouf himself have seen the darker side of this practice, jeopardizing their public and private reputations for their profession. Over the past few years, LaBeouf has some pretty nefarious honors, including: quarrelling with his castmate Alec Baldwin while rehearsing for Orphans (from which he was later fired); getting arrested for disorderly conduct, criminal trespassing, and harassment; being outed as a plagiarist for his short film HowardCantour.com; and even announced via Twitter that he would retire from the acting business in January (a threat that, thankfully, clearly did not hold).

"I'm trying to find a way to have some control over my actions, my behavior, my ideas, my thoughts, my path in life. But it's very new for me. There hasn't been much off time. And when your emotional state is based on whatever you've committed to for the next six, seven months of your life, you have to be careful about what you say yes to. There's a fucking price to some movies. Some movies you don't get back what you give. I'm an insecure person to begin with, but the only thing I've ever been good at is harnessing the negative in my life."

One thing is for certain: Shia is pointing blame at anyone but himself. When a person is so devoted and passionate about their work, and their work concerns heady character studies, it can't be easy to stay totally attached to reality. If you look back, LaBeouf's trouble seems to have started around the time he started pursuing heavy artistic films, like Lars von Trier's Nymphomaniac and Fredrik Bond's Charlie Countryman. "I've been going through an existential crisis. If you look at my behavior, it's been motivated by a certain discourse," says LaBeouf. "Metamodernism has influenced a lot of my action in the public in this last year and a half—the idea of diametrically opposed ideas happening all at once: the irony and the sincerity, birth and death, the immediacy and the obsolescence."

Still, LaBeouf has become conscious of his behavior and how his work has influenced him: "I don't see a big difference between method acting and performance art. My work in my film and my work in my life have influenced who I've become. Life imitates art. And so a lot of my choices, these characters that I've been playing, have actually built a person, they've raised me. So I've just been more careful about my choices. I've taken control back." He's an interesting guy, and his presence in Hollywood certainly keeps things lively, even if he does read a bit like a character in a coming-of-age movie.