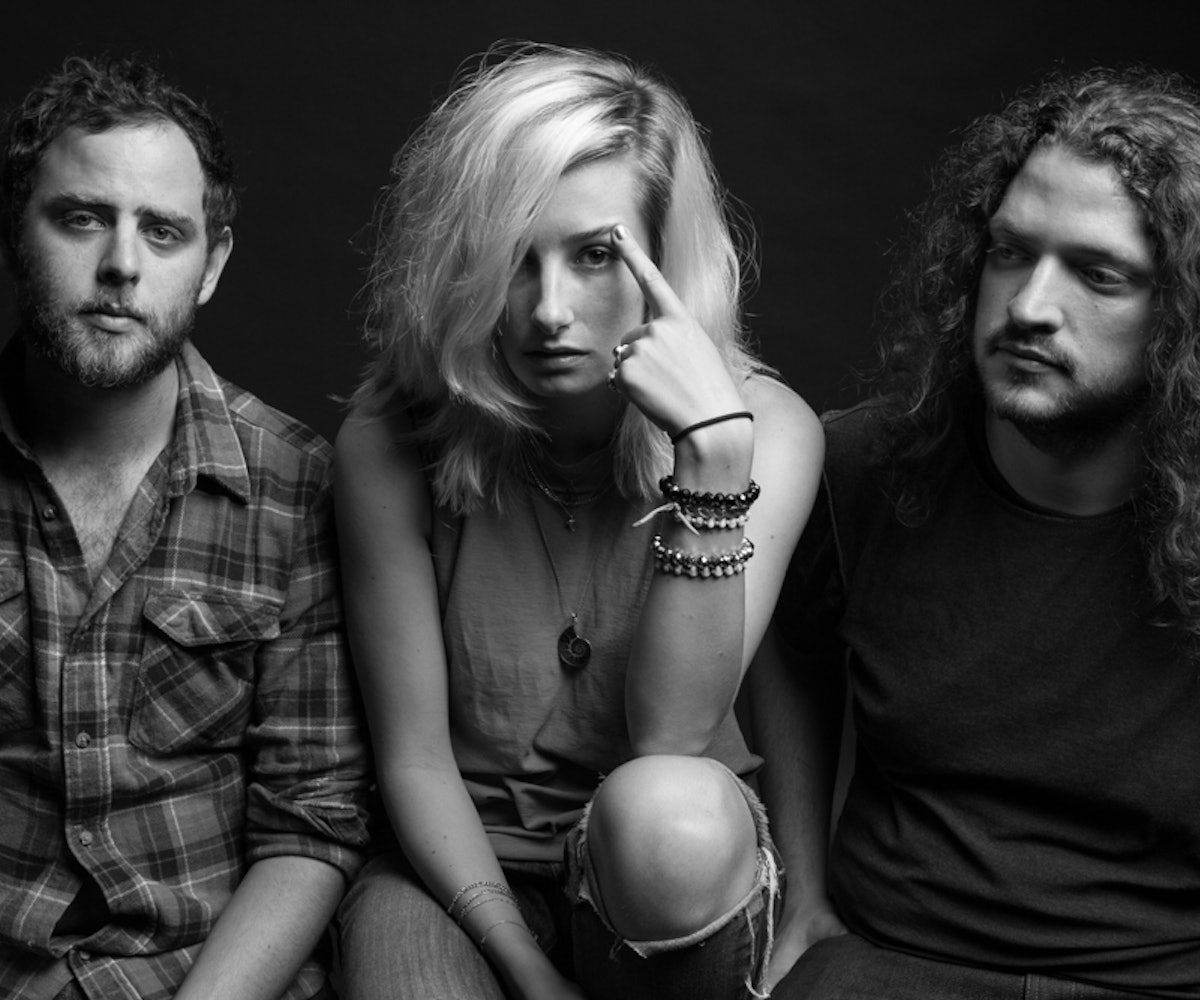 In the shocking aftermath of last week's election results, we all can agree that music can serve as a great—if temporary—escape. So with that, we're premiering the latest video from New York art-grunge trio Slothrust to help ease the pain. Having just released their third full-length album, Everyone Else, on October 28, which follows both their 2012 debut album, Feels Your Pain, and 2014 sophomore release, Of Course You Do, the band’s latest sonic novella is inspired by lead singer and guitarist Leah Wellbaum’s admiration for the ocean and by the awkward realities of everyday existence. On songs like “Horseshoe Crab” and “Like a Child Hiding Behind Your Tombstone," ideas of disassociation from one’s self and the earliest stages of life in the womb culminate into an amalgam of deadpan lyricism and lightning speed, hook-heavy chords that Wellbaum, bassist Kyle Bann, and drummer Will Gorin weave together like intricate pieces of a puzzle.

In their latest video for “Rotten Pumpkin,” which we're premiering here today, the band partnered with director Adam Stone to explore alienation, relationships, and youth in the form of choreographed dancing that was partly inspired by Britney Spears iconic video for “(Hit Me) Baby One More Time.”

"For this video, I wanted to do something that incorporated all three of us,” says Wellbaum, “and that showed all of us working together. I wanted it to be something fun and choreographed. I think it takes a certain amount of effort from where the musicians are to push them to dance, and I really wanted to do that.” She also wanted to convey a sense of desperation, and how we’ll sometimes do whatever it takes to win over the ones we like. “There’s a message in the song about being young, and feeling young, and feeling out of place, and trying to grapple with that type of desperation,” says Wellbaum. “And the main thing in the video is this big talent show that happens. We really go for it. We’re not mocking anything, we’re not being ironic—we’re doing a routine that we choreographed and that we’re excited for people to see.” We spoke with Wellbaum about the band’s latest album, her deep love of the ocean, and what Spears means to her. Check out that conversation and the premiere of Slothrust's “Rotten Pumpkin” video, below.

The last album Slothrust released was in 2014. Why did it take so long to put out a new album?

A big reason is that we were touring a lot, and when you’re on the road, it’s hard to make the type of record that you want to make. We’re also pretty picky about the kind of material that we want to put out. We’re not trying to put out anything that’s half-baked. We want to make sure that it’s thoughtful and that sonically we’re getting what we want and that the songs are developed how we want them to be.

There have been some comparisons of Slothrust to bands like Nirvana and Dinosaur Jr. Do you feel like those are accurate comparisons?

I’ve never been afraid of getting pigeonholed, to be honest. I don’t think that we fit into one genre quite enough that someone’s going to be able to put us into one box, but if they want to do that, that’s fine with me, I’m not really insecure about that. I definitely know people who don’t like to be labeled singer-songwriters or female musicians, and I think that’s really understandable. But I honestly don’t care; I just want to play. I’m happy to hear comparisons, I’m not offended by it. People are entitled to their opinions. Someone the other day—I think it was a much older man in his 60s—compared us to Janis Joplin, which is a stretch, but I love that he said that because talk about one of the greatest talents that will ever exist in music. I don’t really think he’s on point with that, but I’ll absolutely hear it.

I feel that the new album evokes a sense of childhood, of change, with references to water incorporated throughout the songs. Are you trying to convey  certain messages about overcoming obstacles or feeling cleansed?

I think I’m one of those songwriters that realizes what their music is about in retrospect more so than crafting something with intention. In getting this feedback on the new record, I’m getting some insight into the different things that the songs could be about. It’s definitely interesting hearing how other people interpret them, and I love that.

In “Horseshoe Crab,” there’s that line where you sing, “Underwater it gets better when I get better,” and that resonated with me because it felt as if you were talking about feeling low but wanting to feel happier.

I’ve always thought that water and floating are really magical and sacred things, and there’s something to be said for the fact that the beginning of life is in the womb. Essentially what you’re doing is floating in water, that’s it. All you have to do is exist in that capacity. It’s just this way that being fully submerged in water is a very safe feeling. It’s a very comforting feeling.

And in “Like a Child Hiding Behind Your Tombstone,” you sing, “My face feels like glass, but my body feels plastic.” Was that about fragility?

I think I was talking about juxtaposition. And actually, only talking to you just now, I am realizing this parallel between this song and “Horseshoe Crab,” which is this idea of—and not in a sci-fi way—existing in multiple places at the same time and how there are many facets to one’s identity. It was this idea of disassociation from yourself and detachment, and what that means in the ways that one part of your body feels like one thing one day, and another day it feels completely different. And both glass and plastic are these materials that can be a bottle or a different kind of object, but I like the bottle because it’s a container; it’s something that holds something else, which again kind of relates back to the womb.

Where does your connection to the ocean come from, because I wish I was more of a fan. It actually kind of scares me.

Well, you’re right to be afraid of it; you should be. The ocean is absolutely terrifying, and it’s the ultimate ruler. It’s really ridiculous that humans have been disrespecting the ocean because it makes up a majority of our planet. I love the ocean and I love the sky because they're two of the great unknowns. We don’t really know what’s down there; people are still discovering new creatures, and I love that. And I do find the ocean quite scary even though I love it so much. I’ve always been one of those people where the whole “terrified and fascinating” thing goes hand in hand for me. The times that I was writing a lot of the songs for the record, I was going to a lot of coasts and also going through a big transition in my life, and I ended up at the ocean a lot. I actually made this book series called The Fucking Ocean Pt. I and The Fucking Ocean Pt. II, and they’re books with all these photos of the ocean that I took over the course of a year.

So you have been doing a lot of projects.

I was definitely obsessed with book-making these past couple of years. I think I put out like six books with this press called the Blue Pears Project.

Is putting out a book the same feeling as when you put out an album?

I think so. The books came together really quickly. It was just me and the person I was working with at the Blue Pears Project, so it was a quick process; it was really low pressure. I don’t expect thousands of people to buy the books, but if they want to that’s cool. It’s just a different type of pressure in comparison to putting out an album, definitely lowers stakes, but it’s really great to see a piece of art that you’ve made come to life physically and have it as a tangible object that you can hold and show to people. We also made these enamel pins. I did this thing called A Series of Sad Planets, and it’s every planet looking really sad, and we turned them into enamel pins, and we’ve been selling them at the shows. We’re sold out of them now, but we should have more soon.

In terms of the new video for “Rotten Pumpkin,” had Will and Kyle danced before this video, or was it their first time?

I think the dancing was something that put them outside of their comfort zone, and they did an excellent job. I don’t think either of them had danced all that much in the past. But early on, I knew I wanted to write a video that involved the three of us doing a choreographed dance. I really like to dance, and it’s not something that I’ve done in any of the other videos. A lot of our other videos are a lot more austere and don’t show the same side of our personality, but this one is much more playful. Definitely, an influence for this video was Britney Spears’ video for “(Hit Me) Baby One More Time.”

Is Britney Spears an influence on you then?

I think she’s really amazing and interesting. She came up at an interesting time in music and was sort of the quintessential pop star in a lot of ways. She’s also a really interesting person because she doesn’t really like being in the limelight the way that a lot of other performers do. She reportedly does not like to do interviews, and she’s not particularly interested in engaging with people she doesn’t know. That’s just sort of the way that her life’s turned out. I actually wrote a song about her on a previous record called “No Eye Candy.” It’s about her performance the VMAs. I quoted her at the end. There’s like this weird spoken word part [in the song] that goes, “Every night before I go to sleep, I like to read a book so that my mind will stop thinking about the things I stress about.” She’s reportedly a huge reader. She just reads all the time.