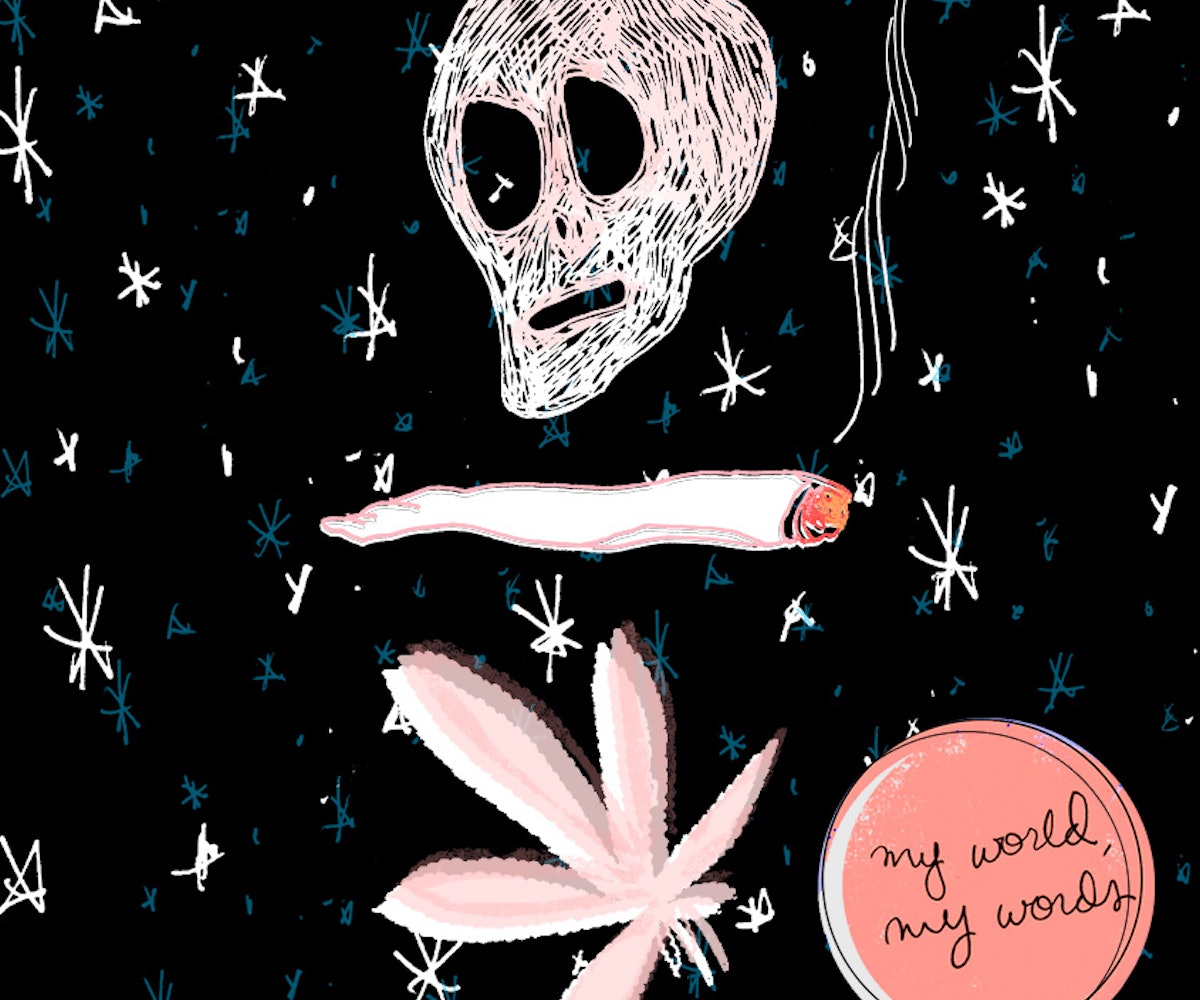 The first time I smoked marijuana was over a year ago, at the age of 21. I was at a luxury resort outside of Los Angeles after a wedding, standing on the patio of the honeymoon suite with friends, including the groom and his best man. Eventually, the groom took out an ounce of weed—a wedding present to himself. We formed a circle outside. I took a hit and passed it.

I had been drinking (it was a wedding, after all) and knew that I was more likely to be sick than stoned my first time, so I was trying to take the smallest hits. I didn’t feel high, but the experience was unforgettable; not only because that first inhale hit my lungs like a stack of bricks, but also because I spent my teens pushing away every person and possible situation that involved smoking pot.

Let me back up. Growing up, I was told that marijuana was The Gateway Drug. No, it wouldn’t kill me; but it would lead me to other drugs that very possibly could. My mother, a judge, presided over one of the most successful drug court programs in Southern California and is known for turning around hundreds of lives because of it. My father was a police sergeant. And my uncle is a recovering drug addict: He became involved with drugs at the age of 18 after befriending marijuana dealers in Manhattan Beach, California, during the early 1980s. A savvy entrepreneur if nothing else, he decided it would be bad business to smoke his own product, and instead turned to using heroin and cocaine. Naturally, with a story like that, I always saw marijuana as a dangerous enemy.

I grew up attending private schools in Los Angeles where money, access, and privilege were inevitable. People started experimenting with drugs and alcohol early on. When I was 13, my best friend Juliana and I became friends with a girl who introduced us to nights consisting of rolling joints and “hanging out” at her house in the hills below the Angeles Crest Forest. I didn’t want to smoke, so she always made me screwdrivers with too much vodka and barely any orange juice from her parent’s home bar. I thought, “This isn’t me! What if we get caught? My parents will kill me, like literally kill me. Is this really worth it? What are we even doing?” I remember a classmate writing in my 8th grade yearbook, “I know what you guys do at [the mall]…” A reputation I did not want—the kind that belonged to real teenage drug users and drinkers on the Maury show—began to take shape. I told my friend that I wasn’t going to tolerate it anymore and she had to choose between being friends with me and smoking weed. We stopped hanging out after that.

I always regretted that choice. Juliana had become part of my family, even joining us on a father-daughter boating trip in Santa Barbara. When we had our falling out, our mothers called one another to see if they could help mend our friendship, but I had made up my mind. I thought she was bad news, and was sure that eventually she would either be arrested or addicted to cocaine, while I would get into my dream college. It was as if I saw our friendship like a Lifetime movie, and she was one joint away from being the talk of the town, spiraling out of control and teaching the rest of us an after school special lesson on bad decisions.

My father passed away when I was 17. He had battled stage 4 colon cancer that eventually spread to his lungs and brain before getting pneumonia that his immune system couldn’t ward off.

After his death, I learned something surprising about my father, who had a law degree yet devoted his entire adult life to being a cop: When the chemotherapy started to take away his appetite, he asked my older brother to buy him pot. There he was, a 50-year-old retired police officer, choosing to do the thing he had always been against in the hope that it could help to save his life. Or at least offer a bit of comfort.

After he died my mother told me he was afraid I would think the drug was acceptable if he did it around me. I wish I could have told him that I wouldn’t have thought any differently of him.

In February 2015, Alaska became the third state to legalize recreational marijuana. Kosher edibles are about to be a thing in New York, and Colorado now has a whole section of tourism dedicated to pot—complete with tour books of dispensaries and places to stay and smoke. States are viewing marijuana differently than they ever have before, and the cannabis industry is subsequently booming.

Maybe marijuana is still a gateway drug, but I now believe that has more to do with personal decisions than the drug’s power. Looking back, my disdain for marijuana started because I was so afraid of getting caught. Underage drinking never bothered me the way smoking did; perhaps I felt it had a tinge of legality to it, since if I only waited a few years, there wouldn’t be a stigma attached. Marijuana, however, was always illegal.

My friends from Los Angeles, the people I knew when I was a teenager who are entering adulthood now, all smoke weed. They grew up with an air of acceptance I just didn’t have. Now that perceptions are changing, now that states are legalizing marijuana and others are fighting for it, now that doctors are considering its benefits for those with chronic illnesses, now that I seem to be in the minority of people who think there’s something taboo about it, I’m rethinking everything I thought I once knew about marijuana. I’m not saying the next time friends ask me to smoke with them I will automatically say yes, but I will no longer judge them for it. I didn’t die, get arrested, or ruin my career on the hotel patio that night, so there’s a good likelihood I can handle one night like it a year.

NEXT UP
Beauty
“Cold Girl” Beauty Is TikTok’s Most Baffling Winter Trend
Culture
Mowalola Teams Up With Bratz For A Daring, High Fashion Collection
Culture
In Cann’s Holiday Campaign, The Greatest Gift Is Being Chill
Life
NYLON Daily Newsletter: December 1, 2022