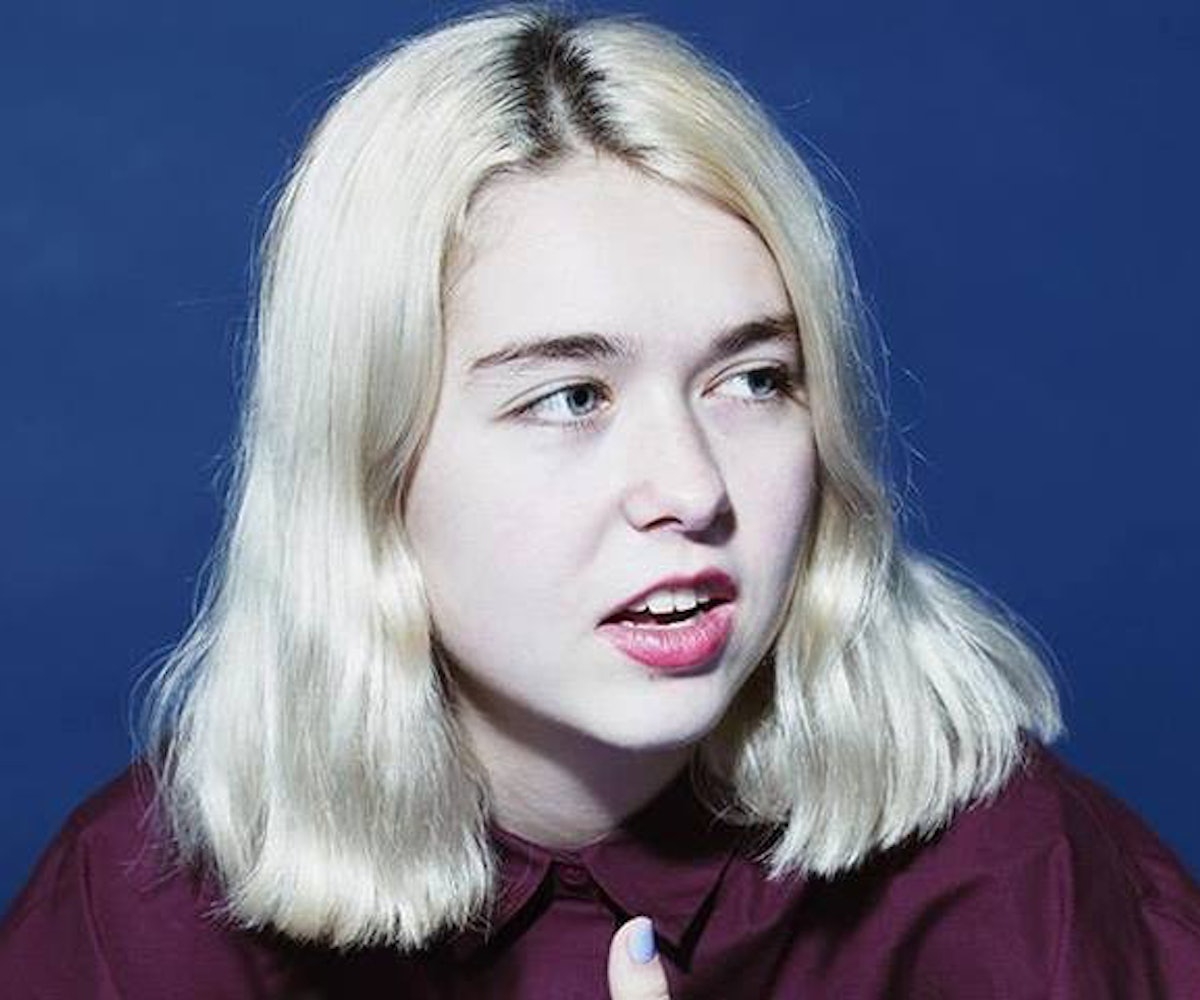 Ahead of our interview, Lindsey Jordan sends me a list of frequently asked questions to avoid, including the ubiquitous, “What’s it like being a woman in a band?” (Answer: “It sucks ass, because I keep getting asked about it.”) It's a bold move but serves as further evidence of Jordan's low threshold for bullshit—despite operating in an industry where art sometimes takes a backseat to drama and interpersonal politics. That said, the singer-songwriter also known as Snail Mail is ready to clarify her position on some stuff with the kind of raw wisdom you wouldn't expect to come out of a 19-year-old's mouth. “I don’t want to tokenize [who I am],” she says, in between mouthfuls of cookie. “It has nothing to do with my music, and I don't consider it a part of my musical identity.” She stops to consider something, “But if it means you can be a beacon of representation for other people, then that's tight.”

It’s evident that the Maryland native has spent a lot of time ruminating on these big questions, which makes sense seeing as how she’s probably spent more time touring and doing press for her forthcoming debut studio effort, Lush, than she has studying for finals. “People ask me the same stuff again and again,” she says impatiently. “I don’t want to... answer about what it’s like being a girl for the rest of my life.” So what does she want to talk about? Read our Q&A with the rising indie sensation below to find out.

In all my years of interviewing and writing about musicians, no one's ever sent over a list like that.

I was being a hothead about it—sitting there, getting asked about being a girl all the time. The other day, someone was like, "Are you proud to be a woman in music?" And I was like, "No..." That's not even the worst of it. I'm definitely proud of what I have accomplished as a human being playing music. I don't wake up in the morning proud to be a woman. I'm totally a feminist, totally a politically driven person, and that's what I care about, but I don't write songs about it, and nothing about me screams that I'm doing anything about it. I wish that I was, but I'm not. There are so many people who are out there playing music and being helpful and doing shit, and I'm just writing these songs that have nothing to do with it, and everyone is like, "This person is gonna represent women's rights."

That responsibility is heavy. A lot of times, it also feels like people feel like they have to talk about their trauma—it’s the responsibility of being a public figure. Which really shouldn’t be the case.

Exactly. Sadie Dupuis in that New York Times article was basically like, "I'm not just gonna list off trauma. It's not going to help anyone." That was the sickest thing.

[So why do I need to be like], "Hello world, I am gay." My friends all know and stuff, but to the music world, it's part of [my music] now. It's in the subtext. I don't even know where to start. I don't want to tokenize it. Because it has nothing to do with my music, and I don't consider it a part of my musical identity... But if it means you can be a beacon of representation for other people, then that's tight. I'm really split about talking about being gay, because I didn't have any heroes that were gay women growing up, so I never heard anything about writing a love song about other women—even though I'm sure there's millions out there, I felt like I had to pave the way for myself. It would be cool to be that for someone else, but at the same time, I hate [feeling like I’m capitalizing] on my identity.

I heard you got signed to Matador without them even hearing anything. How does that happen?

I was still in school. I had a lot of resources [and a lot of connections], but I didn't have a lot of friends who went from DIY into [bigger label], so it was feeling in the dark. Everyone was like, "You guys are sellouts," and we hadn't even sold-out yet... We had 15 offers. It was cool, but I didn't know what that meant for me. I took a lot of meetings. I was so confused. There was a lot of decisions that I had to make, and I was like, "I don't know!" I was so scared.

What is the big difference between your first EP Habit and this new release?

I'm so proud of my new release. It's like my son. It's literally my baby. There's literally nothing about it that I would change. We made three versions of the record. There's a demo version, a rough draft, and the record, which is just... it took so long. I took a year-and-a-half to write it, and we had what felt like unlimited resources.

I had the engineer and the producer of my choosing. I remember me and the guys when we got to actually recording, we had this discussion. We were like, "It's scary how much we can do right now. We can take this and do literally anything with our resource." It was terrifying and so sick.

[With] Habit, I didn't intend on anyone hearing it. This one, I’m definitely going to enjoy playing it every night. The prospect of people hearing it is exciting to me because... it's a piece of me. I can back it so hard.

Many people have also been hyping you alongside fellow indie rocker Soccer Mommy. How do you feel about that?

It's funny because Sophie [Allison of Soccer Mommy] is a really close friend. We've played house shows together and we see each other every week because of our schedules. For that, I'm like, “Okay, hell yeah.” Everybody in our bands just love each other. We are like brother-sister bands because we came out at the same time, and we're all young, and we all love each other. But outside of that, I really resent people being lazy. I feel like they don't even listen to both [of us]. We can agree with each other—Sophie and I—that the music is not the same. Saying it's a wave is in itself isolating us as women. But it's like, what is the association [between us] other than the fact that we are both women playing guitars? I have so much respect for her as a songwriter, and I think that band rules, so I don't mind the comparison because I like them, but at the same time, it just seems so lazy. They're totally just tokenizing it, and I don't think either of us intended to be tokens. But I can't speak for her.

It's so fun seeing her everywhere though because we get put on the same bills—but we are different bands. It just feels like people desperately need something to cling to—I just wish that it was just our music instead of the fact that we're friends... People are like, "Oh my god, queens!” And it's like, “Dude... stop.” Her music is awesome, and it would be great if everyone could listen to mine too and not just be like, “These two are the same because they're both young women.” It's bizarre.