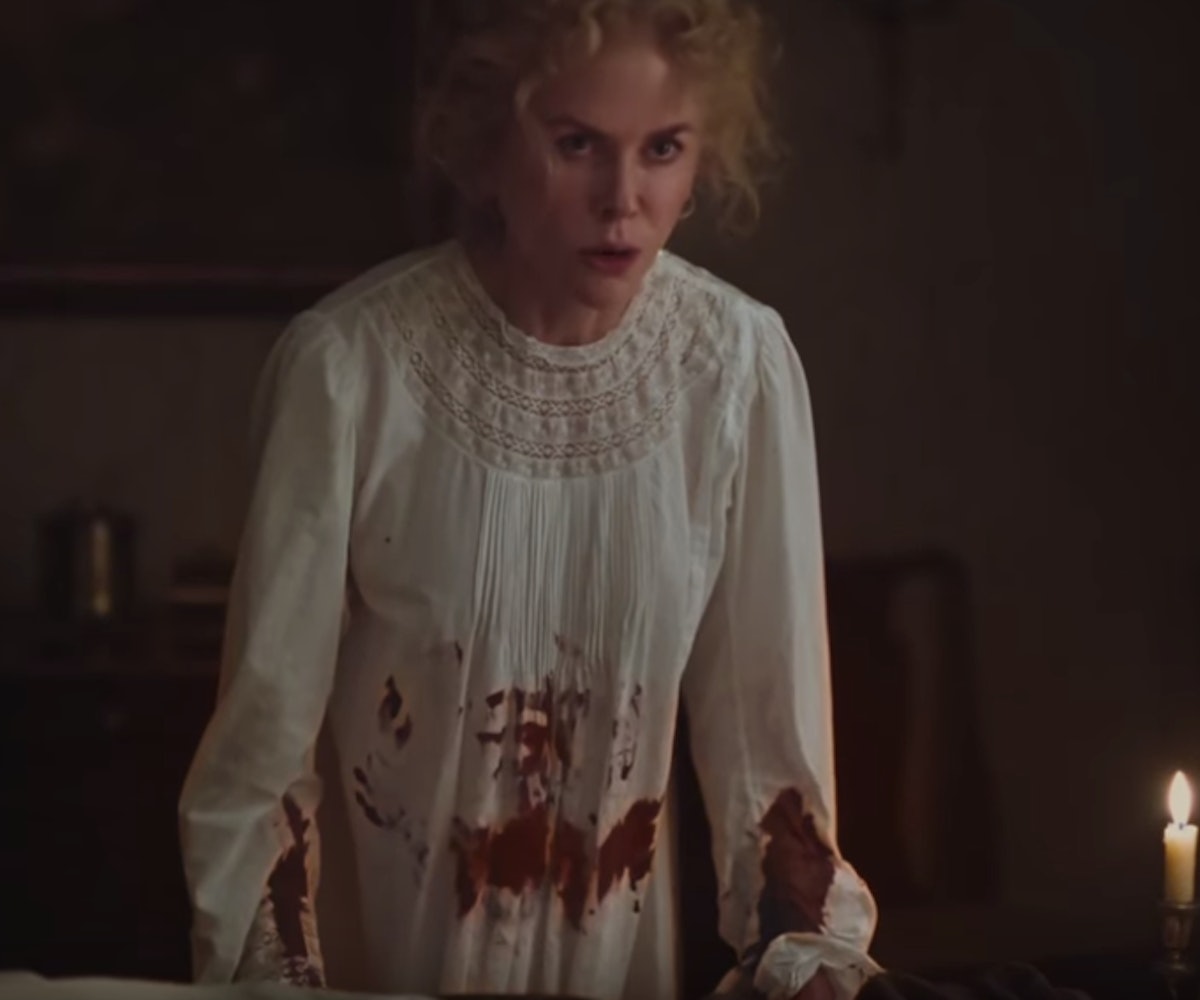 There was a point a little more than halfway through my viewing of The Beguiled, when the audience with whom I was watching Sofia Coppola's latest film erupted into laughter for the fourth or maybe fifth time, when I thought to myself, Why don't more people talk about how Sofia Coppola is one of the funniest filmmakers working today? What is wrong with everybody?

Okay, let me guess what you're thinking. You're thinking, Funny? Her movies are about teenage girls killing themselves and thwarted love and soon-to-be executed monarchs and parents with emotionally empty interior lives and how that affects their children and gangs of jail-bound teens and, like, the decay of antebellum Southern society. If I could describe her films in one word it wouldn't be "funny," it would be, like, "gauzy."

First, let's take that word "gauzy," and think about it for a minute. The very fact that this word is so frequently associated with Coppola's work is at once a strange dismissal (because, of course, films made by a woman would be over and over again reduced to their visual aesthetics, as if women filmmakers are inherently interested in style over substance), and also accidentally insightful, because for something to be gauzy means that it is filtered, that its perspective is skewed. And this is what Coppola does so brilliantly in all her films, she perverts the ways in which we are used to seeing things, by draining them of predictable plot, by refusing to give audiences the love story they're expecting, by rejecting happy endings, or sometimes, anything resembling endings at all. So, yes, Coppola's films are gauzy in both the visual and metaphorical sense; watching one is like viewing the world as if looking up through a veil of water; everything is slower and softer, and you probably ought to pay really close attention to what's going on—if for no other reason than that you don't miss the jokes.

Because the jokes? Are very funny. And there's a lot of them. Okay, now you're probably thinking, Alright, there are funny moments, but it's more a subtle sense of irony that pervades her film rather than any laugh out loud humor. Which, sure, there are lots of sly spots of hilarity throughout her films, ones that are more gestures toward humor than literal jokes, like in The Beguiled, when Colin Farrell answers Nicole Kidman's stern admonishment that he is "a most unwelcome visitor," and that the women of the house are "not there to entertain him," by saying, "You'll find I'm easily amused." It's a funny line, and Farrell's delivery is perfect, but the reaction kind of tops out at "knowing smirk." Which is fine! I love giving knowing smirks. But that's really just scratching the surface of Coppola's films, which rely on broad humor as well, and really deliver it, whether via Kidman's later plea to get her "the anatomy book," or the scene in The Virgin Suicides in which Josh Hartnett is introduced as teenage lothario Trip Fontaine to the tune of "Magic Man" by Heart. And then there is Bill Murray shooting the whiskey commercial in Japan in Lost in Translation; what's not to laugh at?

Speaking of Murray, perhaps one of the most obvious signs that every movie Coppola makes is at least on one level a comedy is that she consistently works with some of the funniest actors in show business from Steve Coogan and Rip Torn to Jason Schwartzman and Leslie Mann to, of course, Murray; but Coppola makes sure her casts are stocked with actors who might not normally be thought of as funny, despite having true comedic chops, like Kirsten Dunst (Bring It On, Drop Dead Gorgeous) and Kidman (To Die For). While it's obvious that all these actors are versatile enough to slip into dramatic roles as easily as comedic ones, in Coppola's films, they don't have to choose, because the material is fertile with possibilities on both ends of the spectrum.

This, then, is probably one of the main reasons why Coppola's humor is never given its full due; she's not making films that are purely funny, the narratives are also always tinged with pathos or dread or ennui—or sometimes all three. But this only makes the comedic element that much stronger. Like, would it be as funny to listen to Dunst as Marie Antoinette ask Schwartzman as Louis XVI about his interest in key-making if you didn't also know they were going to one day die at the hands of an unruly mob? Probably not. And would it be as hilarious to see Hartnett floating in a tiny aboveground swimming pool if you didn't know he would be forever devastated by the suicide of his high school sweetheart? No, it wouldn't. Coppola's films aren't funny in spite of the darkness, they're funny because of it; she is not afraid to reflect the world as it is, full of complicated wicked realities, that are made bearable by their inherent absurdities, and by our ability to see those absurdities and laugh at them.

Other filmmakers working today strike this same humorous tone, if not always as consistently. Martin Scorsese pulled it off with Wolf of Wall Street; Paul Thomas Anderson had it in Boogie Nights, and Wes Anderson plays in this territory, too, though he gets a lot more credit than Coppola does for both the humor and seriousness of his work. But, of course, there could be one simple explanation for why Coppola doesn't get the comedic credit that she deserves; she is, after all, a woman, and there are still plenty of people out there who think that women just aren't funny.

And yet, that explanation feels pretty facile, or at least, not the whole story. Because while women filmmakers certainly have a harder time of it than male filmmakers in just about every regard (only one woman, Kathryn Bigelow, has ever won the Oscar for Best Director; only four have been nominated in the award's 80 year history, with Coppola being one), there has been a rise in woman-helmed comedies, thanks to movies like Bridesmaids and TV shows like Broad City. But while these types of comedies have received great acclaim, it's hard to ignore that their comedy is centered around, well, making fun of women. Sure, the women in them are making fun of themselves, and that is better than, say, having a comedy in which men are making fun of women for being women. But it highlights the fact that women are still not thought of as being funny unless they are the butts of their own jokes.

This isn't the case with Coppola's films, in which the jokes are almost always made at the expense of men. There are exceptions to this, of course. The ditzy actress played by Anna Faris in Lost in Translation is a prime example, as are the abhorrent mother-daughter duo of Emma Watson and Mann in The Bling Ring, but those aren't so much examples of women being mocked as they are of Hollywood and celebrity—power, really—being the punchline.

This, then, is Coppola's real target in her films, the skewering of power in all its forms: absolute monarchy, celebrity culture, patriarchal oppression, ineffective parents, and, simply, men. Coppola's films are all studies in the destructive nature of having too much power, the ways in which it leads to boredom, corruption, death, and decay. Coppola doesn't take a moral stance on the actions of those in power; she has been criticized for this in the past, particularly with regards to Marie Antoinette, and it's one of the reasons her films are said to traffic more in aesthetic pleasures than intellectual ones. (As if the two need necessarily be separate!) But this is short-sighted, an unimaginative take on the many ways Coppola uses style to prompt viewers into seeing the shape of the world in a different way than the one they're used to; she uses style to give her films a different weight, a shape all their own, one that's inimitably hers, in all its devastating grace and sly, wicked humor.

So while perhaps it isn't her most purely funny film (that would have to be The Bling Ring), The Beguiled is peak comedic Coppola for the way in which she presents 90 minutes of some of the most gorgeous, sumptuous filmmaking of the decade, and uses that lush and light-filled beauty to present a tale that is about the literal dismemberment of the patriarchy and invite you to laugh out loud as a domineering man fights for his last breath, suddenly powerless to the smiling women surrounding him. What could be more amusing than that?

NEXT UP
Entertainment
Jacob Elordi To Play Elvis In A New A24 Movie
Life
Julia Fox Calls Ye “The Most Lit Rebound Ever”
Life
Mia Goth & Ti West On Pearl, Their Latest, Sumptuous Horror Film
Life
The 2022 Emmys Had A Good Burger Reunion