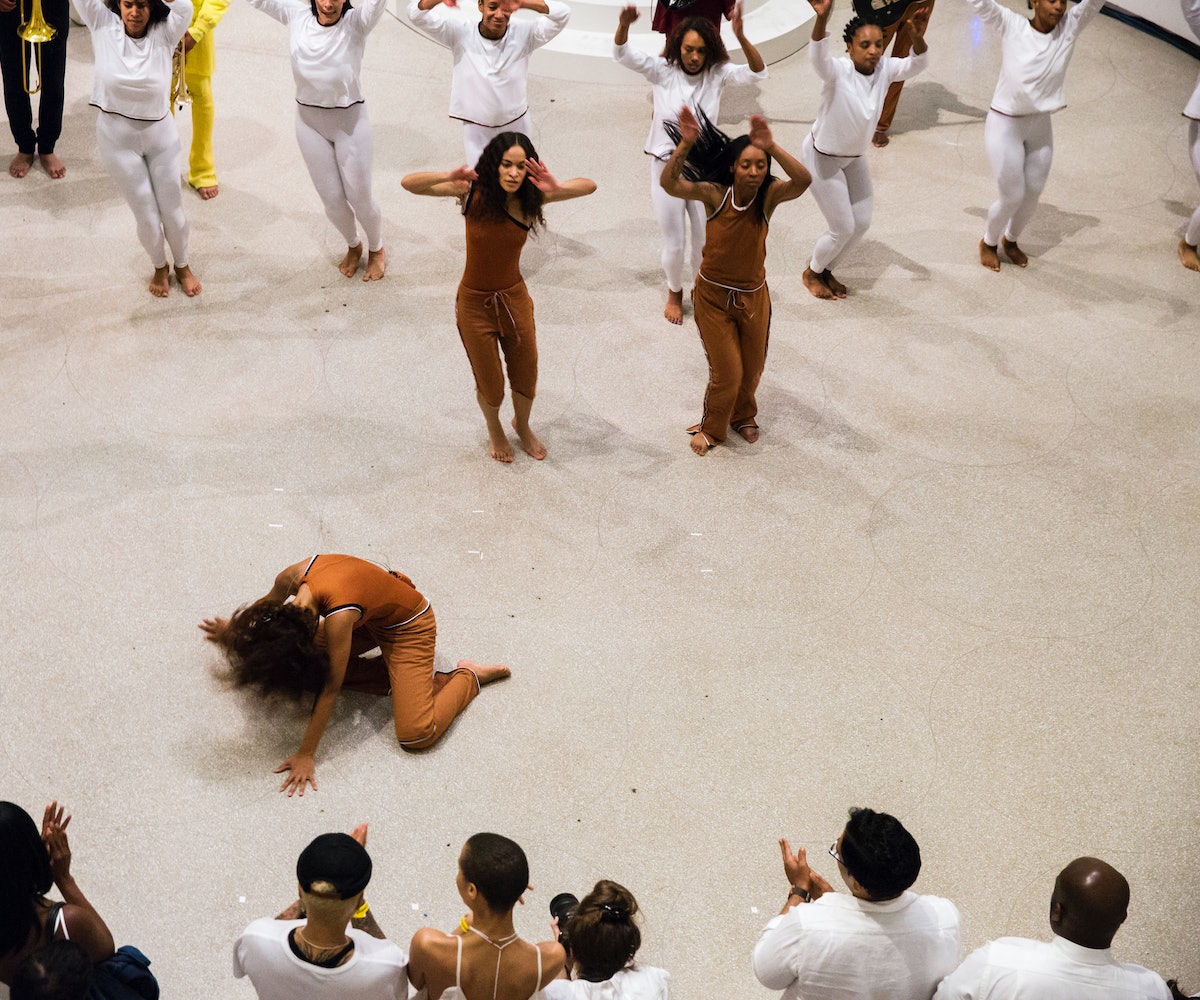 Only Solange has the power to convince hundreds of people to show up at the Solomon R. Guggenheim Museum on a scorching afternoon dressed in all-white, making for a visual spectacle that a friend described as looking like "a mob of church folk." All attendees for the sold-out show were required to turn in their cellphones at the door, allowing us to lose all track of time and be fully present in the moment.

The performance, titled "An Ode To," was described in the program pamphlet as "an interdisciplinary performance piece and meditation examining themes from A Seat at the Table through movement, installation, and experimentation with reconstructed musical arrangements;" Solange was credited as the choreographer, composer, and musical director. What she created felt less like a concert, and more like a ceremony; for the duration of "An Ode To," Solange transformed the Guggenheim into a sanctuary, one that celebrated blackness and black women.

The show began with six members of Solange's band emerging from behind a display of geometric sculptures wearing red, green, yellow, and blue outfits. The musicians sounded an instrumental warning bell to signal the arrival of Solange. Starting at the top level of the iconic venue, a line of black women dressed in white and earth tones made their descent. Solange was toward the back of this group of barefoot goddesses; once they reached the bottom of the atrium, they took their places and opened with "Scales."

Witnessing Solange perform within this artistic space was a phenomenal experience—her voice soared, invigorating all who were present, making everyone feel alive. She performed hits like "Rise," "Weary," and "Cranes In The Sky," but reworked them with interludes to allow for more choreography. Solange and crew clapped and beat their chests and thighs with their hands and threw their bodies into each dance sequence; they screamed their frustrations during "Mad," the echoes of their wails striking everyone at once, sending chills up our spines.

"F.U.B.U." had the entire crowd bursting with energy as a 13-piece horn ensemble rose from behind the walls of the upper levels and filled the room with ripples of brass. During this number, Solange walked through the sea of guests, singing directly to the black faces in the crowd. These were the faces, Solange would later say, that she had in mind when she made this album; they were all the easier to see in white. There were moments when Solange broke out on her own to dance on the floor or with security guards who lined the walls.

Solange ended the performance by delivering a statement of gratitude to all of her supporters, saying, "Thank all of you guys for being a part of my artistic journey and allowing me the space to evolve and utilize my choreography and arrangements in a space like this... Frank Lloyd's temple."

But after thanking the Guggenheim and Red Bull Music Academy for the use of the space, Solange confessed that she doesn't really "care much about the institutions," even if museums do happen to be "beautiful spaces." Instead, Solange made a call-to-action for women of color to start "tearing the fucking walls down" of places like the Guggenheim because simple inclusion and allowance are not enough. She added, "We belong here. We built this shit." She encouraged us to hold our communities tight.

As we all filed out of the building, we were greeted by the sun and a wave of unbearable humidity, but people lingered outside—none of us were ready to leave this newly formed community just yet.