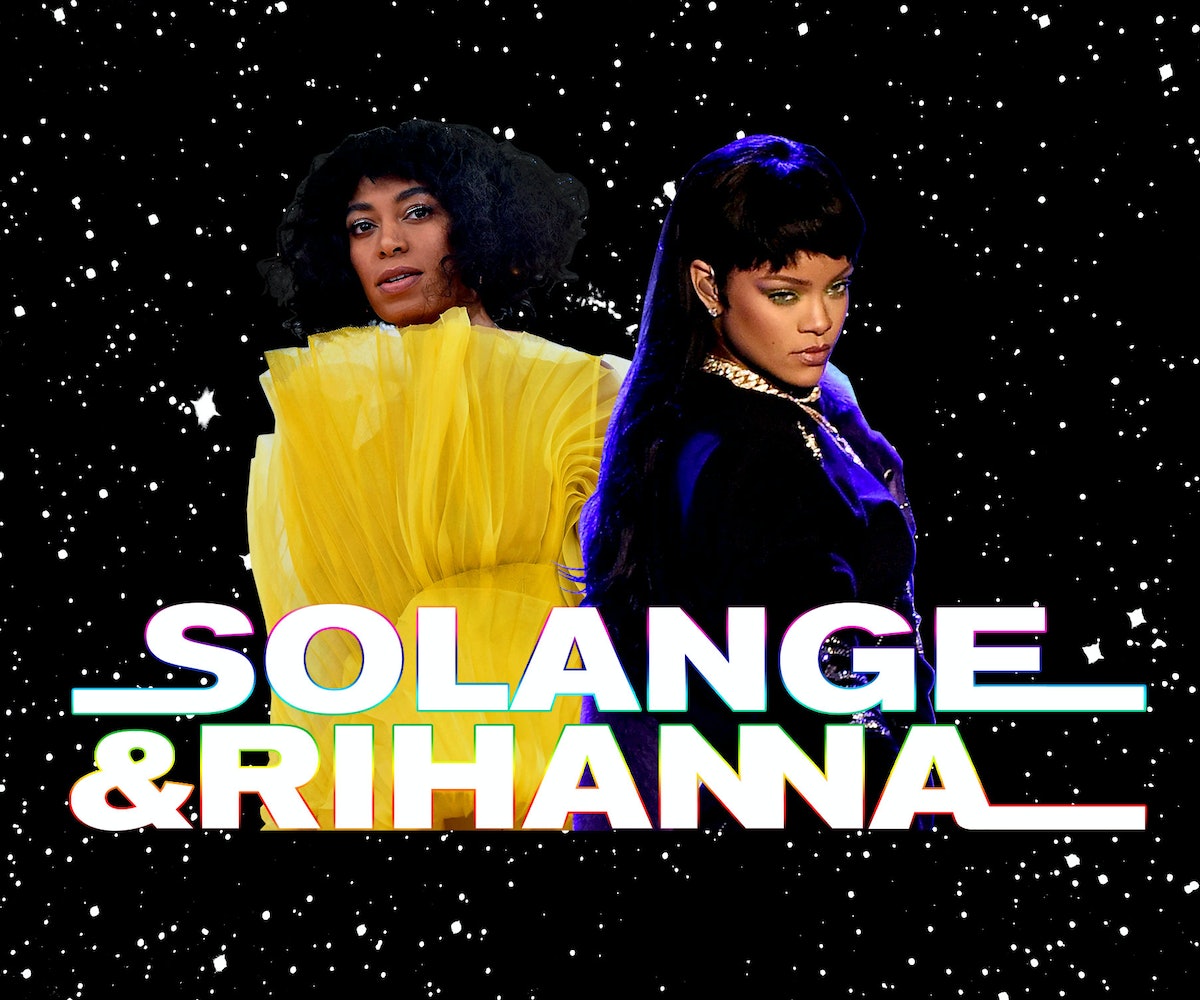 Let the record show that Star Wars can be applied to almost everything in life. Even if you're not a fan of the series, there's no denying the power it has held on pop culture since its intergalactic setting was first introduced back in 1977.

While there are billions of stars in the Star Wars universe, it's hard to deny that most pale in comparison to two of our own universe's brightest stars: Rihanna and Solange. These visionary artists often feel like otherworldly beings, and the rest of us mere mortals will never fully comprehend how we could possibly exist at the same time as them. Naturally, we had to pay tribute to these two powerhouses and imagine what it would be like if they were, in fact, a part of the Star Wars universe.

There are a few reasons why this makes perfect sense. First, Rihanna is already obsessed with space. We know this because 1) she has a track on the Star Trek soundtrack 2) she has been spotted wearing Star Wars-inspired apparel many times 3) she made pieces that look straight out of the deserts of Mos Espa for the Fenty x Puma Spring/Summer 17 collection debuted at Paris Fashion Week.

As for Solange, well, she's always channeling the force. With everything that she does, her mission is to uplift her community. She stands up and fights for what she believes in, using her platform to call out the various social injustices of the world. Solange's latest release A Seat at the Table has already been hailed by many critics as one of the most powerful albums of the decade. Plus, just look at the Giles dress she wore at the Met Gala.

Below, we have outlined exactly why Solange and Rihanna represent both sides of the force using GIFs as examples. The next installment of the Star Wars franchise is currently in development, and while we know it's a reach, we really think the forces behind it should consider tapping these ladies for a cameo. They don't even need new names—Solo and RiRi are perfect for the Star Wars universe. Need more convincing? Well...

Okay, but have you seen the way Solange moves?

Here she is having a moment with nature.

I wouldn't want to be caught in a fight with Solange for many reasons, but this right here gets the message across.

Seriously, back up! Solo is not playing.

When the earrings come off, the full Force comes out of this one.

Here's Solange using the Force to halt the wind so she can balance on top of this tree stump.

This would definitely be one of Solange's many palaces located somewhere like Nobu.

Solo practicing the Force because a real Jedi never stops.

Look at those Jedi skills in action!

Obviously, Solange and her team are leaving a Senate meeting. She is a woman of the Galactic Republic aka Saint Heron, after all.

Standing up for what's right in the universe.

Solo walks in the light.

Solange is weary of the ways of the world, but also one with the universe.

Bad Gyal Sith Lord vibes. The dark side is strong in this one.

Before she was bad, Rihanna was just the only girl in the world.

She could feel the Force flowing through her veins.

Can you control the air? I didn't think so.

Here she is fighting water with her Jedi powers.

Lord knows that Rihanna knows how to work an umbrella—imagine what she can do with a lightsaber in hand?!

Rihanna using her mind to make the money flow, her biggest weakness.

Rihanna would definitely take this bad boy for a spin to the Outlander Club.

Drake would definitely be the Padmé to her Anakin.

When everyone betrays Rihanna and she officially turns on the world.

Here's Rihanna plotting revenge back at her secret lair.

No man can resist Rihanna and she knows it. We dare you to try looking away...

Even if she's stranded out in the middle of the galaxy, Rihanna will find a way to get back on track.

Here she is on her throne deep in Imperial City.

Rihanna controlling the universe around her because she can.