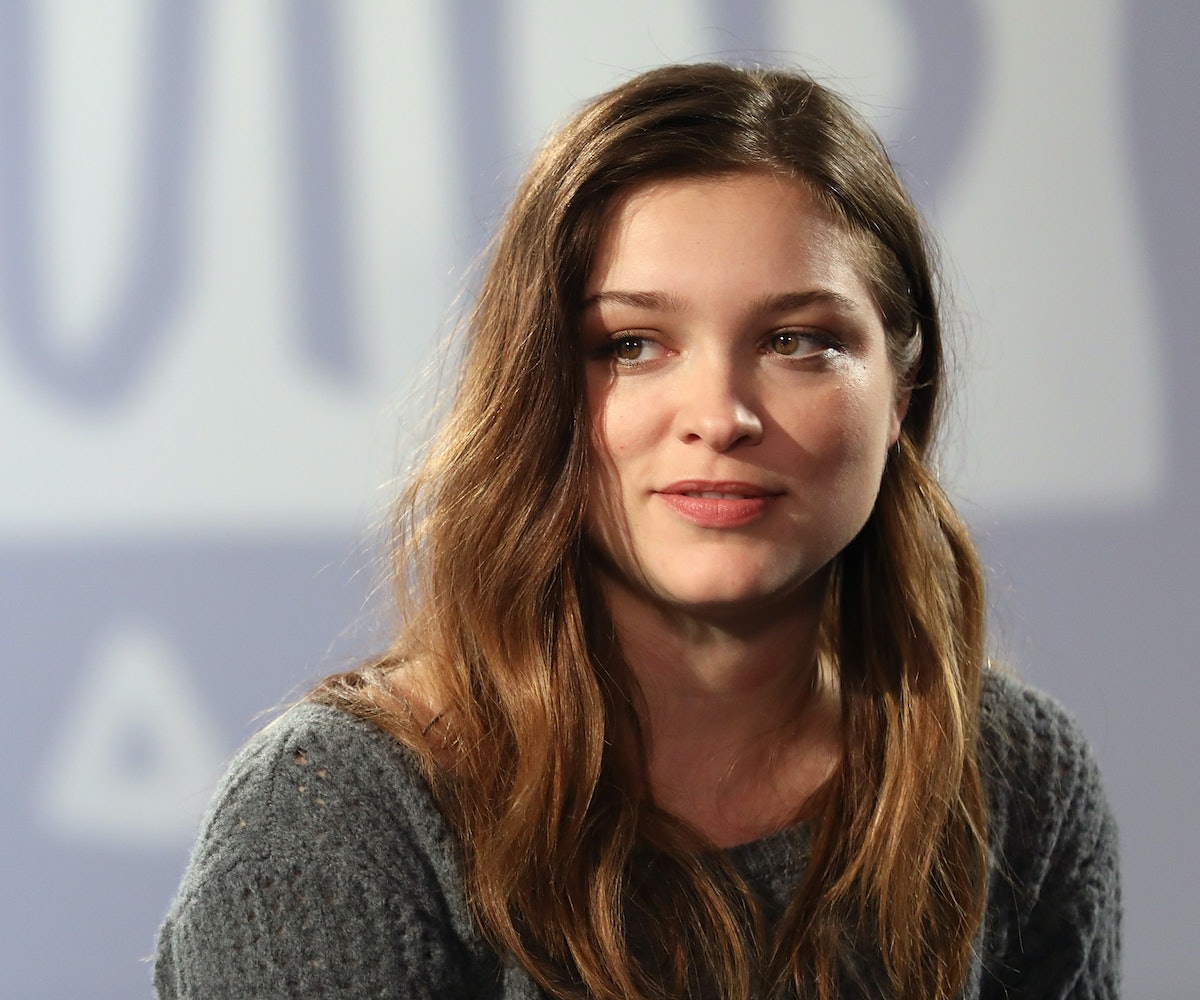 Growing up in Sussex, England, Sophie Cookson was, she tells us, something of "a Hermione.” Bookish and ambitious, she was easily intrigued by the world around her. She loved animals, and convinced herself that being a veterinarian was in her future. Then there was an interlude where translation appeared to be the career path—breaking barriers between human beings through language. These obsessions eventually gave way to acting, though, despite her family’s “active discouragement.”

In the past few years, Cookson has stuck to being in front of the camera. She immediately garnered attention for her role in Kingsman: The Secret Service, playing the sole female recruit in Matthew Vaughn’s electrifying spy thriller. That breakout performance subsequently landed her parts in The Huntsman: Winter’s War, The Crucifixion (out later this year), and the anticipated Kingsman sequel, also out later this year.

However, most impressively (and recently), Cookson has taken her talents to television. In the new Netflix series Gypsy, Cookson is a charming barista who quickly grabs the attention of Jean (Naomi Watts), an upscale Manhattan therapist who can’t seem to escape suburban ennui (she has a home in Connecticut). When we spoke with Cookson by phone, she was eager to discuss how Watts mentored her on set, her fear of watching herself on screen, and remaining grounded while moving forward in Hollywood.

How anxious do you get before a project of yours gets released?

I find it unbearable to watch, even if I feel quite happy and very proud of it, which with this project I definitely am. I’m so nervous, but very excited to see it all come together.

It’s a good fear. I think when you’re that invested in your job and you’ve given that much to it, you hope it’s going to turn out the way you envisioned and that you’ve done the writers justice.

Are you going to watch it when it comes out or are you against watching yourself?

Considering Netflix is my most-used site on the internet, I think it’ll be a pretty hard job avoiding it. I’ll just watch it alone in a dark cupboard somewhere with a very strong gin and tonic next to me.

Was there something on set you were surprised to learn about acting?

I’ve never done a TV show like that before where it’s 10 episodes, so we would only get two scripts at a time. That was very different, trying to keep all avenues open for your character. The writer was so secretive and naughty that she’d never let us know which direction it was heading in. That was good and kept us on our toes, definitely. Also just the pace. The fact that we would maybe shoot seven scenes in a day as opposed to someone like Matthew [Vaughn] doing Kingsman where we would sometimes only shoot one scene.

You’re more active on a TV show than a film.

In some sense. I feel like with a movie you know your whole journey, and even though little minutiae might change, you’re able to get a better idea of where you’re going, whereas TV is engaging a different side of your brain.

Day-to-day on set, how do you manage nerves?

When you have someone as amazing as Naomi steering the ship it helps. You just have to remember that at the end of the day you’re both just two actors in the same space that want to do the best job they possibly can. Naomi has a great sense of humor as well, so it was never a terrifying ordeal. You definitely feel the pressure though. It’s Netflix; it’s Naomi Watts; it’s a pretty big thing.

In the past you said you wanted to do everything with your life. Has that ended?

I feel like acting’s a really good excuse because I just get to pretend to do everything and then back out if I don’t like it. As a kid I wanted to be a vet; I wanted to be an architect. I was and still am such a little geek. I love reading and learning. With acting, I get to put all that into my work and still get to do my homework and imagine I can do all these different jobs.

What happened to being a vet?

I think the vet thing was never really going to happen. I just loved animals and thought that would be the best thing, but it probably would’ve been the absolute worst and I would’ve been such a softie and a very emotional vet. I’d be pretty useless.

Would it be you sobbing on a daily basis at work?

Yeah! Or just wanting to go home with all the animals and not turning up for work.

With the developments in your career, do you feel your environment—the people around you—shifting at all?

Not really, because all of my closest friends have been friends since I was a kid. Nothing that solid and grounding has really changed. I guess I’m very extracted from it. I think it exists in an isolated bubble. My personal life is exactly the same. I have really great people around me but I think it is a job at the end of the day. I like my home life the way it is. I don’t want it to change.

What are you making of the ancillary parts of this job—interviews, shoots, etc?

I feel like I’m coming around to the idea that you should never say no—hop into as many different experiences as you can possibly get yourself involved in. You always learn something new. It’s all stimulating stuff that feeds back into it. It never feels redundant.

As a kid, did someone in your family ever think acting would be a possibility for you?

No, none whatsoever. As soon as I expressed any interest in it they actively discouraged me from it. Why would you advise your child to become an actor that probably won’t work? They weren’t big fans, but they all know that if I put my mind to it, I’m going to do my best to make it work. But then once I came out of drama school and started working that kind of shut them up, luckily.

What’s something you hope to accomplish in the next few years?

I’d definitely love to do some theater. I find it really strange that I haven’t. It’s definitely not a conscious choice, it’s just the way the cookie’s crumbled since drama school.

Do you want to write or direct?

Yeah, maybe one day, but I think I should probably practice a bit of acting before I step into anyone else’s shoes. One day at a time.