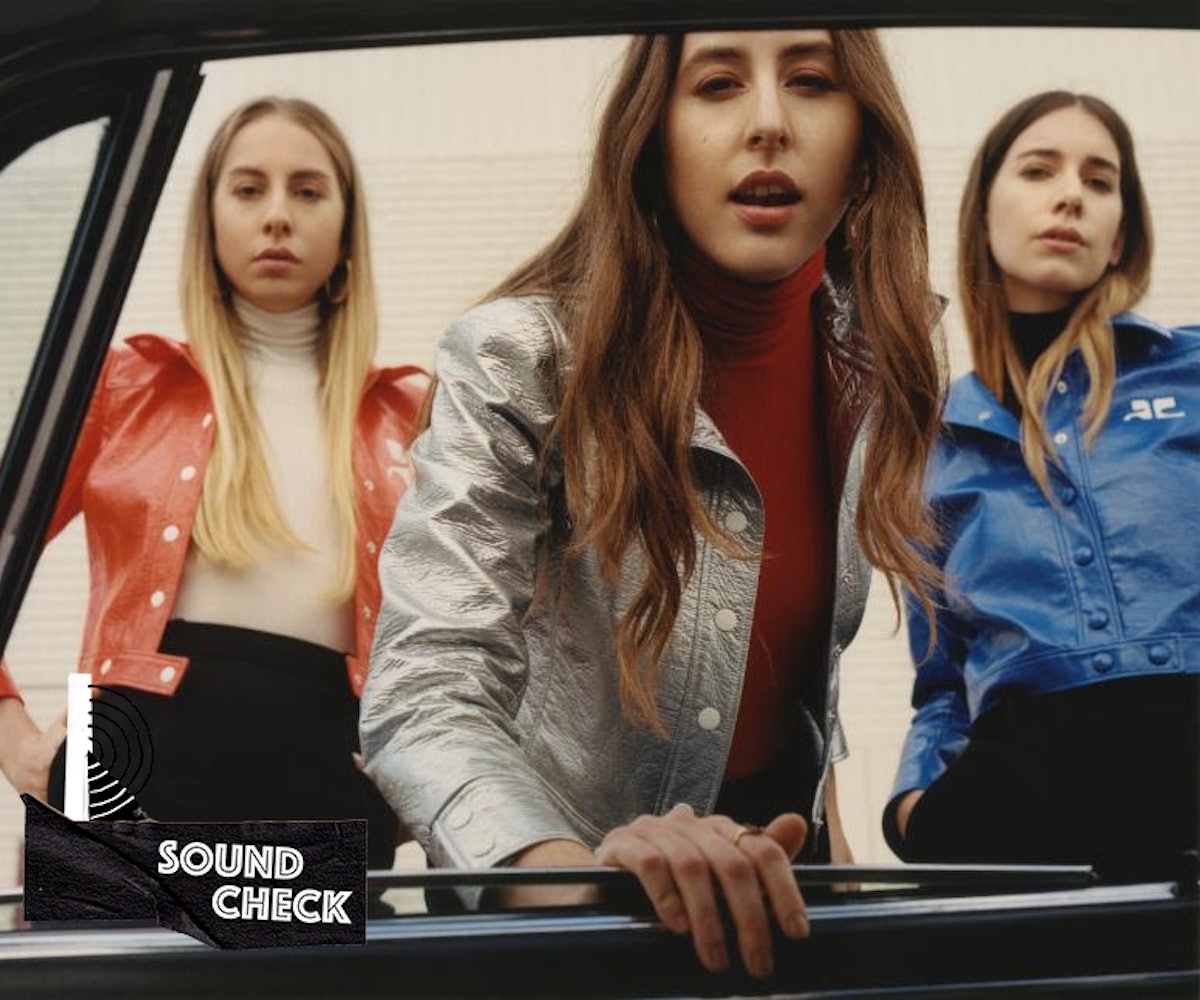 Every weekend, we’re bringing you #SOUNDCHECK—your new destination for the best of the best new music that hit the web over the course of the week. Because you should always be prepared when someone passes you that aux cord. This week’s round features 38 of our favorite emerging and established artists including Haim, SZA, Frank Ocean, and so many more. Turn up, tune in, and tune out.

Our bodies are ready for HAIM at all times and when this single premiered we convulsed all over the place. Something to Tell You drops on July 7 via Columbia Records.

Still no confirmation on when CTRL will be released, but SZA wants us to know that she's not going anywhere. This lusty duet will be your new "boy bye" anthem oneso crank it up this weekend. Bless you for these gifts, Solana.

Seriously, what did we do to deserve all of this generosity? Frank Ocean transitioned from being in hiding for four years to dropping a new single every week. No complaints here though!

This video is the latest from Killavesi's Run & Hide Mixtape. Basically it's cool, chilled, and so badass... like pretty much everything she does.

Adamn Killa's new catchy track is giving us a taste of what's to come before his debut album I AM ADAMN drops next month.

This is the cutest video we have ever seen. Congrats to Cashmere Cat for the release of his debut album, 9. The wait was totally worth it.

"Is It Too Much to Ask"— Faye Webster

Webster makes throwback folk jams that don't make you feel like you were digging through grandma's records.

Boo you know you gotta love this.

Jessie Reyez is the voice the industry needs. "Gatekeeper" holds absolutely nothing back, and her sheer talent shines through it all.

"Saw You In A Dream"- The Japanese House

Here's a brightly-hued song for your TLC needs, care of the perrenially cool The Japanese House.

Don't worry, you're not tripping on acid, it's just Little Dragon's new video.

We may have discovered this year's song of the summer a few months early.

The beat is awesome, the lyrics are timely, and the whole song is just so powerful. It gets deep.

"Young and Menace"— Fall Out Boy

So this video may or may not involve a little girl running away from her parents... who appear to be giant fuzzy troll creatures, but I mean who doesn't love FOB?

The anthem that every high school girl needs to listen to. This song is everything.

After dropping three songs on Thursday, Foster The People are back in action. If you missed their EDM magnificence then you have to listen to "S.H.C."

"Swimming on Me"— Rainy Milo

Rainy Milo is giving us all the feels with this new breakup track.

Missing 4/20? No worries, you can still get "stoned" with BLONDAGE.

After the success of last year's Nat Love, Kweku Collins has decided to bless us with nine new songs.

This song is super cute and totally embodies everything good about young love.

This sultry track is just what we need as the weather starts to warm up.

Whatever Makes U Happy— JMSN

JMSN is here with his fifth album and we're going to be jamming to it all weekend long.

Did you miss Gorillaz? Cause we sure did. After being pretty quiet since 2010, they're back with 26 new tracks for us to obsess over. After all, no other band can do edgy, moody, raw animation quite like them.

This soft, melodic song is perfect for a weekend of relaxation. You can hear what Anik Khan himself had to say about the song in his interview with Ebro Darden.

Gemini season isn't for another month or so, but its ruling planet got itself a truly transcendent song. Sufjan Stevens, Bryce Dessner, Nico Muhly, and James McAlister's collaborative effort Planetarium (out June 9) is about to take you places.

Goldfrapp's Silver Eye album is truly a return to form, pushing the British electro duo to new, mystical heights. "Systemagic" is one of the standouts and Alison Goldfrapp's directorial debut with the video is otherworldly.

C'mon, pop princess! Allie X's latest will have you whistling while you werk, even when you know you shouldn't.

Oh, how we missed the sweet, sweet vocals of Ellie Goulding. Here's the song you'll be hearing all summer.

Bright Light Bright Light puts his ever-positive spin on some of cinema's most beloved cult favorites. This is pure bliss.

Who knew the world was missing a '90s R&B ballad-inspired belter? CROOX did and delivered it with "Loyal."

Ingrid Michaelson's infectiously happy 2016 song "Celebrate" gets remixed into ever more of a bop with AJR's help. Throw it back, bbs. This is music that heals.

"So Much Better"— Sandro Cavazza

As if the other singles weren't any indication, Sandro Cavazza's forthcoming self-titled EP (out now) will sweep you off your feet.

Anna Lunoe's first track on her own label, HYPERHOUSE, lives up to the label's name. This will leave you shaken, stirred, and turnt.