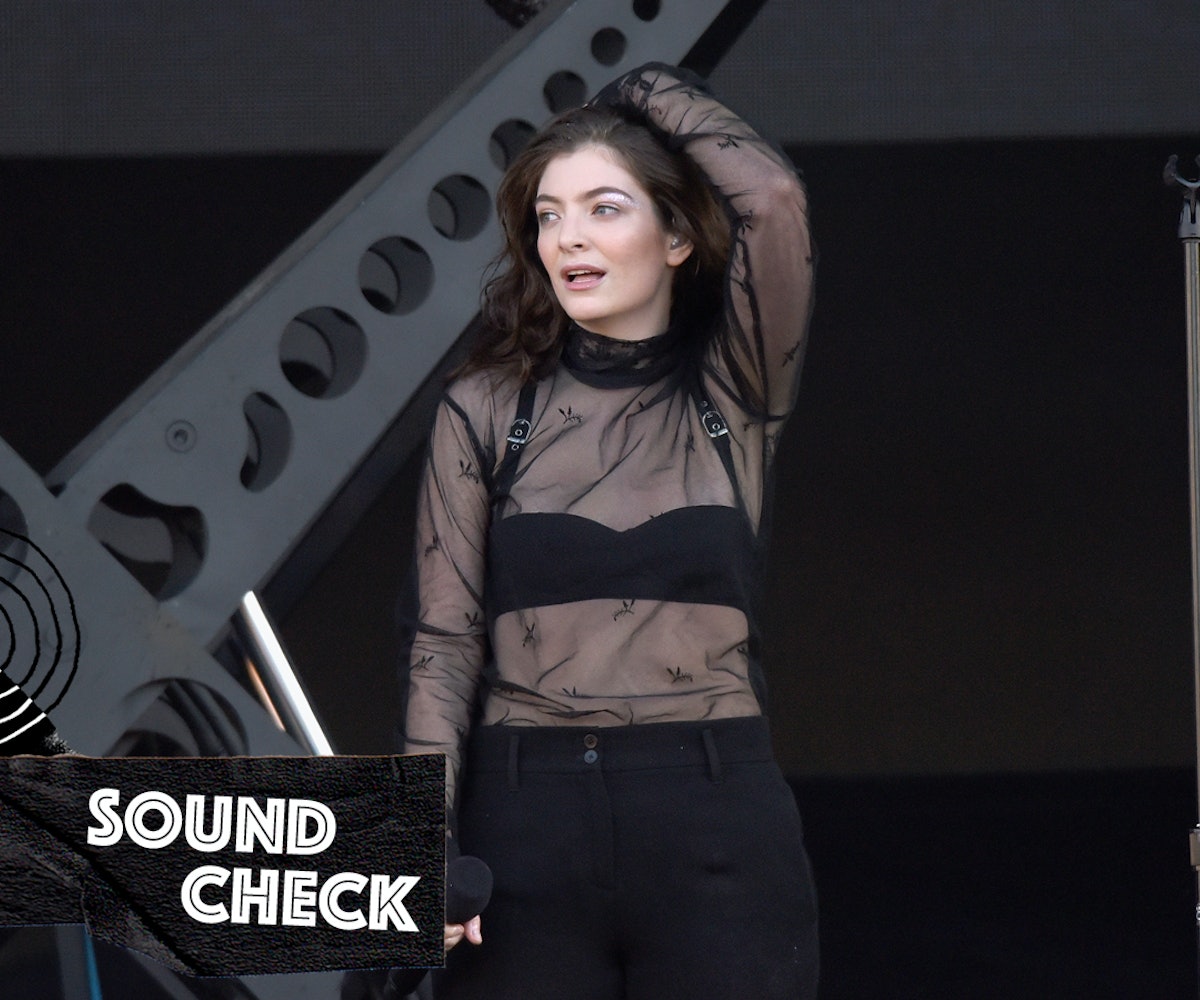 Every weekend, we’re bringing you #SOUNDCHECK—your new destination for the best of the best new music that hit the web over the course of the week. Because you should always be prepared when someone passes you that aux cord. This week’s round features 32 of our favorite emerging and established artists including Lorde, The Killers, Selena Gomez, and so many more. Turn up, tune in, and tune out.

Lorde's musical evolution is evident in this stunning sophomore release. Melodrama is a sincere, introspective look into growing up, as she bids adieu to painful memories and searches for pieces of herself that she’s left behind. This record was certainly worth the wait.

The mysterious electronic trio have taken their stellar debut project and triumphed over it. BOP CITY 2: TerroRising is the future of pop music. It's dark, sinister, sweet, and, like a major theme in all their lyrics, addictive. Welcome to the city where dreams are born, die, and reborn again.

This '70s-style video features Selena as several different characters caught in a strange love triangle, in a way that only Selena could pull off.

In their first single released in the last five years, The Killers tries their hand at funk. Despite the single’s name of “The Man,” the band is deliberately boyish in their bass-driven single that attempts to answer the question on everyone’s mind: “Who’s the man with the plan?”

The U.K. singer's latest track is sultry and soulful, with a dreamy black-and-white video to match.

The New York duo teamed up with Polaroid Eyewear for this video to "Hit the Ceiling," the first track from their upcoming EP. The electro soul song reflects positivity and lots of good vibes.

This wine-stained, Kubrick-inspired visual from the Weeknd will leave you in a trance.

This Future remix of this Post Malone banger goes harder than the original.

This Toronto band gives off major '90s vibes, complete with old-school telephones and overalls, in the music video for "DIY." It's a feminist anthem that won't leave your head all day.

Charly Bliss, a power pop band from Brooklyn, is on our radar this week for its nostalgic camp-inspired video to "Westermarck" from debut album Guppy.

Rih, Tiller, and Khaled all over a Carlos Santana sample. Need we say more?

The Japanese House keeps blessing us with a slick production and dreamy vocals. We could listen to this for hours.

Arcade Fire released their third single as the countdown to the release of their fifth studio album continues. Strap on your roller-skates and plug in your strobe lights because this one’s an '80s throwback! The smooth synthesizers and shouting back-up vocals will surely you grooving.

Dej Loaf’s bouncing new single will make you want to take your relationship to the next level.

Aoki puts his trap music chops to work on this banging new track with Migos and Lil Yachty.

This Pharrell-produced single from Vic Mensa is everything a summer rap track should be and more.

"Fuck With You" is the latest indie pop single from Los Angeles duo Cardiknox. It's pretty much guaranteed to bring everyone to the dance floor at any party.

French psych-rockers Holy Oysters' latest track is a catchy ode to those frustrating moments when you find yourself back at square one.

"All I Can Think About Is You" - Coldplay

Dreamy and atmospheric, Coldplay’s romantic new single is perfect for late-night walks with that special someone.

Beth Ditto’s savory new solo album will make you want to dance around your house, Risky Business style. Fake Sugar is the edgy, '00s-style indie record we haven’t heard in a long time, and desperately needed.

Yoke Lore merges musicality and storytelling in his sophomore release, as made evident by his name. We'll be bound to this EP all weekend long.

Say hello to EZI, the first artist to be signed to Steve Madden's (yep, the guy behind your favorite shoes) new record label, 5 Towns Records. "REDEMPTION" is playful, sad, and made for warm summer nights. Press play and twirl to your own broken-hearted fantasy.

We can't get enough of Ruby Francis. The way the U.K. neo-soul singer's silky voice pairs with this piano-driven production is something close to perfection.

DREAMERS delivers a punchy track that’ll make you fall back in love with indie music. The swinging beat that drives the song is guaranteed to get you jamming this weekend.

Meet Stockholm duo Indiia. Their debut single, above, is about to be your new beachside anthem.