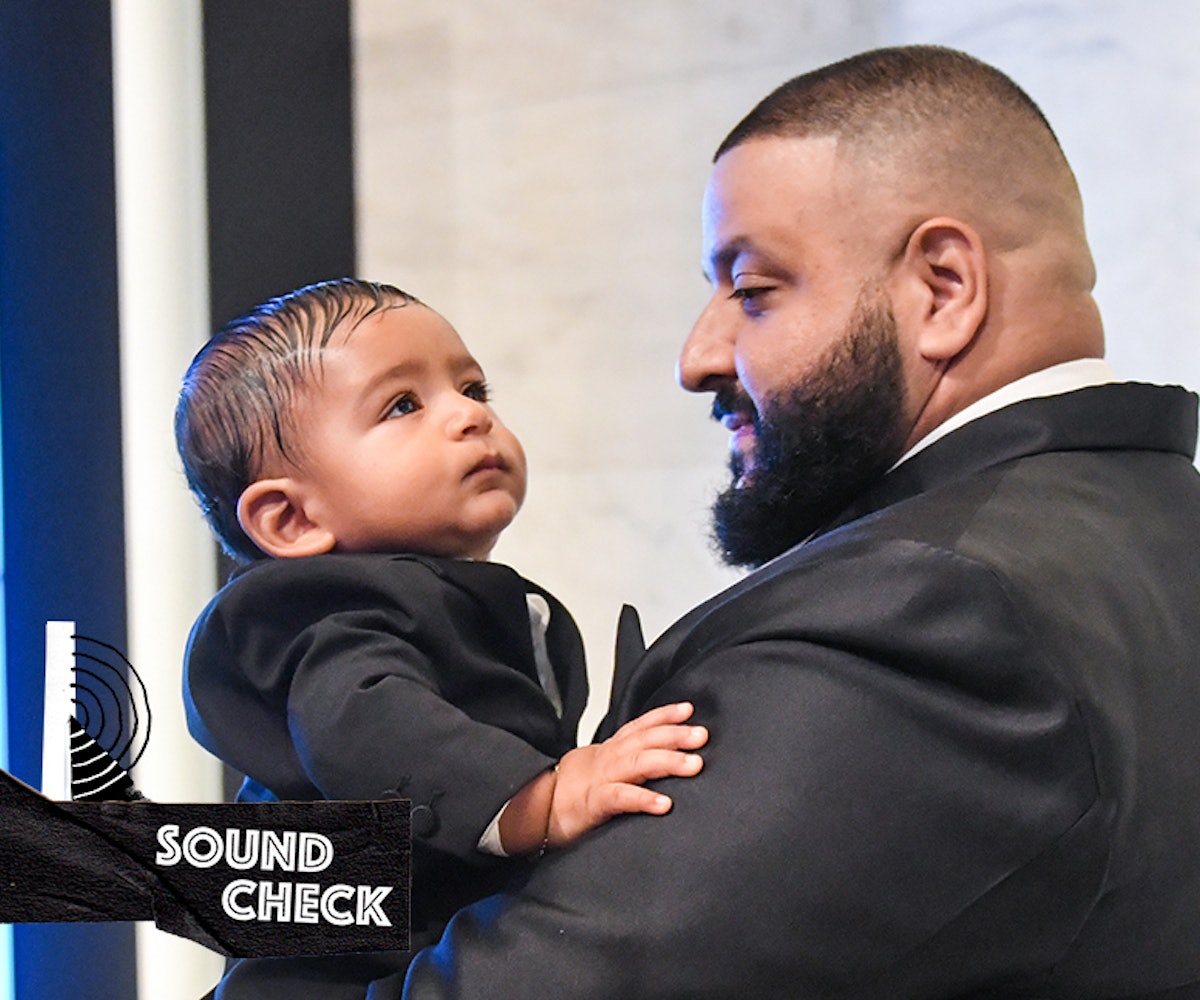 Every weekend, we’re bringing you #SOUNDCHECK—your new destination for the best of the best new music that hit the web over the course of the week. Because you should always be prepared when someone passes you that aux cord. This week’s round features 37 of our favorite emerging and established artists including DJ Khaled, HAIM, Radiohead, and so many more. Turn up, tune in, and tune out.

The world has yet to fully digest his star-studded 2016 release, Major Key, but that won't stop Khaled from feeding the people. He's back again with more No. 1 singles, more A-list artists, and a single that's already gone platinum—we're looking at you, "I'm the One." It would be cliché to say we're grateful for this jam-packed record (and we are), so we won't. Instead, let's toast to Asahd Khaled's first executive produced album. Bless up.

#SZARRYMORE is real and we absolutely need more of it.

"Little Of Your Love" - HAIM

As if we couldn't be anymore in love with HAIM. Groove to their warm new single, "Little of Your Love."

Get down and dirty in the heat of a moshpit in Father's latest video.

French DJ Martin Solveig teams up with ALMA to bring you the newest addition to your summer party playlist.

This new Radiohead visual will have you checking over your shoulder anywhere you go.

"Lovers" - Anna of the North

Anna of the North pours out her soul in this new track with blazing visuals to match.

Willow Smith and SZA combine their piercing vocals for a short and sweet percussive single.

Ariel Pink takes you on a soft, psychedelic adventure through a strange bar in their latest visual.

"Brave For You (Marfa Demo Version)" - The xx

This homey acoustic tune from The xx is giving us all of the feels.

Fresh off of his the Life Aquatic tour, Long Beach native Vince Staples has arrived with his much-awaited album.

This effortlessly clean visual of TOKiMONSTA and Yuna has us wishing they collaborated more often.

The visual for LPX's "Tremble" is a colorful whirlwind of expression and vulnerability.

Meg Mac wants you to know that neither she, nor you, need permission to do what you want to do. Now that's a message we can get behind!

"Stuck With Me" - Joël Lobban

Toronto-based alt R&B artist Joël Lobban lays down a slick earworm for you to vibe out to for the weekend.

L.A.-based singer/songwriter and producer Emmit Fenn's 23 million Spotify streams proves that he is one to watch this summer. And with artists like NYLO and Yuna by his side on this stylish new EP, Fenn certainly is gearing up for electro-pop domination.

Warning: You will fall more in love Rita Ora after watching this quirky, romantic visual for her new single.

A dose of Fall Out Boy a day keeps the negative energy away!

Kintaro's Universal (EP) is a breath of fresh air. Formerly of The Internet, Kintaro's solo endeavor oozes originality. We don't like to play favorites, but one stellar track on this EP is "Mk," partially due to Anderson .Paak's soulful feature.

"Pulling Me Under" - Kevin Garrett

This stylish new video from rising singer/songwriter Kevin Garrett will get you all the way in your feelings, all weekend long.

Shlohmo teamed up with Sneeze magazine to create this trippy 25-minute visual, chock-full of mixes with some of raps heavy hitters. Especially dig into these mixes of Mobb Deep (RIP, Prodigy), Rae Sremmurd, 21 Savage, Migos, Young Thug, and more.

"Coming Back Around" - Tayla

Rising Birmingham act Tayla follows her buzzy 2016 debut, "Call Me Danger," with this gritty new track. Embark on a wild ride with the artist, above.

Hope For Something (EP) - Panama

Panama's lively new EP is bursting with anthemic, electro-pop tunes that'll make you want to take an impromptu road trip with some of your best pals. Fans of Bastille and The 1975 should make room in their summer playlists for this Sydney, Australia-based artist.

The summer vibes are strong with this one, y'all.

Bianca Monica makes her music video debut inside an installation by studioSPACEnyc, directed by The Neo-Noir's Eve Del Prado. Talk about making an entrance.

The artist formerly known as Paris Carney is back with a new moniker and delicious love song to her husband.

Chi-town, come through! NYLO's back and sexier than ever.

Gin Wigmore and Steve Rusch teamed up for "Hallow Fate." Launching alongside the track is GIRLGANG, a new collaborative project focused on art and female empowerment. For the project, Wigmore chose five artists to create five pieces of work inspired by the new material. Tattoo artist Briana Sargent made the one shown in the album art.

Get your 10s, girls. Sashay the runway with this RuPaul's Drag Race star.

"All good girls want to get in trouble," Gallo sings on "Sugar Daddy." Ain't that the truth. Press play and find the fun in being bad.