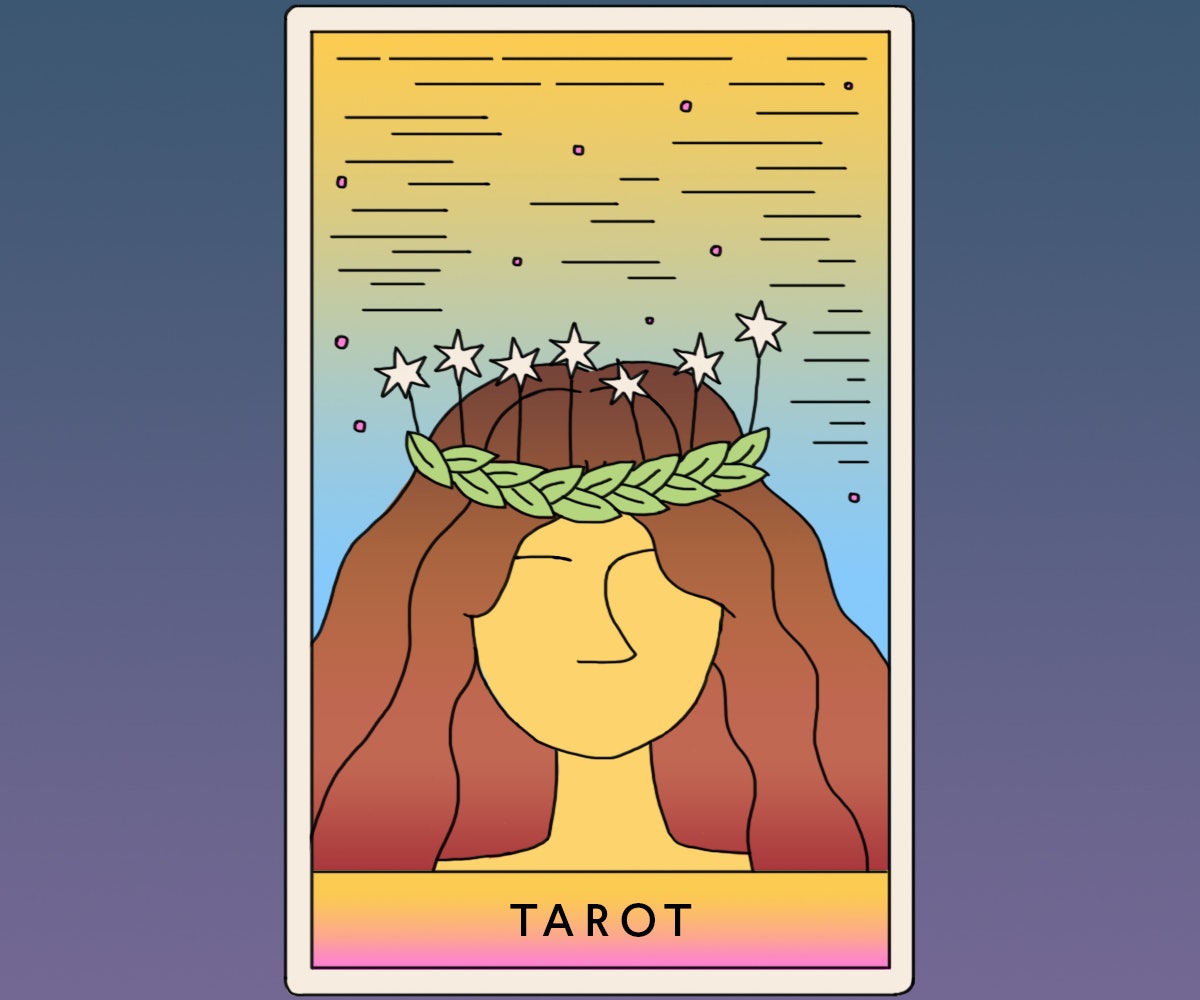 Tarot, crystals, and other mystical trappings of alternative healing and New Age wellness have transcended the realm of “Practical Magic” to become a full-fledged, mainstream commodity. Gwyneth Paltrow espouses the hormone-balancing qualities of $66 vagina rocks, and Urban Outfitters sells a guide on how to harness the energetically healing powers of gemstones for “health, wealth, love, and luck.” New Age is having a moment, that’s for sure. Whether you believe in it or not, is another question entirely.

Personally, while I try not to be a judgmental asshole toward friends who do find comfort and solace in these things, I often feel a little skeptical when it comes to rocks with purported healing powers, cards that can predict the future, or oils that can guard you from bad vibes. So, naturally, this year I paid money for my very first professional tarot reading.

The reading (which my deeply spiritual, yoga-teaching sister and I arranged together to celebrate her birthday) took place at Modern Mystic, a bright, cheerful little shop in Atlanta, where sunlight streams in over whitewashed brick and geometric wooden shelves hold neatly arranged displays of protective oils, herbalism how-to texts, and Palo Santo smudge sticks. (My friend Beca once correctly referred to it as “like, crystals for Kinfolk.”)

While I’m fully aware that New Age practices have evolved in recent years, my expectations were still woefully, cartoonishly outdated. I pictured the reading taking place in a dark, plush alcove, perhaps behind a thick layer of beaded curtains, my future spelled out in cryptic predictions by an ethereal fortune teller as spooky music and swirls of incense smoke wafted through the air. Instead, Kelley led us into a small, well-lit nook within the shop at a long wooden conference table, sans smoke and mirrors. Had you spotted our trio from afar, you may have assumed we were just catching up, talking shop, or having a very chill business meeting.

Being a tarot virgin, I hadn’t realized that it would be necessary to come with specific questions to pose to the deck—again, my uneducated idea of a reading was more like a palmistry exercise or, I don’t know, tea leaves: lofty prophecies drawn out from a shadowy array of signs, markers, and omens most mere mortals can neither see nor fully grasp.

The reading, however, was none of these things: no spooky music, occult vibes or glimpses into the great beyond. Whether I believe a stack of beautifully illustrated but ultimately inanimate cards can actually possess the answers to life’s greatest questions is still up for debate, but, as we progressed, my knee-jerk cynicism unwittingly took a backseat. We were discussing real shit, and each card represented a real possibility, a potential outcome, the highs and lows, the long-term and short-term repercussions, the hopes and fears that hang out just below the surface of my consciousness. Laid out, it represented a series of “if then, then that” possibilities rather than neatly delineated “yes” or “no” conclusions. In a way, each card posed more questions than answers, but in a manner that forced me to carefully, critically parse through the potential—like crafting a flowchart for your own future. I, the sarcastic doubter who raises an eyebrow at everything yet loves overthinking most things, was sold.

My sister had the presence of mind to record my session for me and share the audio with me afterward. Listening back, I can hear my own skepticism and doubts falling away through the session. My nervous giggles and dumb jokes start to subside in place of me saying things like, “Oh, interesting” and “Hmm, I’ve never thought about it like that before” and “Well, yeah, I do kinda feel afraid of that, actually.” I can hear the hesitancy in my voice as I describe the inertia I was feeling in my career and a tinge of anticipation as I pose the question of turning it all upside down in pursuit of something more fulfilling. Thirty minutes in, I can hear my own sheepishness when I tell Kelley that I cannot for the life of me decide whether I want to have a family, and I can hear a bit of yearning to know whether there is indeed an answer tucked in that deck of cards.

The cards didn’t tell me what to do. The cards forced me to think about the question at hand from a multitude of angles, the obvious ones but also those I wouldn’t necessarily think to examine on my own. It illuminated reservations I didn’t consciously realize I had and reassurances that had never crossed my mind. (Sure, I’m a skeptic, but I’m not going to lie: It was a little comforting seeing the Empress card show up in answer to my concerns about lacking a maternal instinct.) Certain cards called to mind patterns and fears that had lurked beneath the surface, but that I’d never fully vocalized, like a quiet, underlying worry that having kids would mean my own career might suffer while my partner’s trajectory continued unfettered (as illustrated in the wary Seven of Swords). Recognizing that making the decision to have kids would, indeed, be an act of bravery, and, in turn, acknowledging that these fears and doubts don’t automatically doom one to being a bad parent; recognizing that certain decisions will come with a burden of emotional work, but would still be worthwhile in the end.

Rehashing it with my sister afterward, she remarked that the experience, whether you “believed” in tarot or not, was a little like making a decision by flipping a coin; not simply to achieve an outcome, but to know which outcome you were already hoping for, without even realizing it. You have your answer before the coin even lands.

As Kelley laid out the cards that represented different potential trajectories in my life—quit my job or stay; have kids or don’t—it encouraged me to see the future not as a singular path upon which I’m making either correct or incorrect decisions. The cards on the table represented the choices I had and the outcomes that may follow, good and bad, a little messier and a little more ad lib. “Like a game of Chutes and Ladders,” I joked.

I’m still not sold on the idea that a stack of cards has all the answers. But, I’m not ashamed to say that I was floored (and, yes, humbled) at how clear-eyed I felt walking out of the shop. As for whether that clarity came from an hour of guided introspection or from the forces of the divine, well… I don’t think it really matters. Whether it’s a serendipitously drawn Empress card, a burning stick of sage, or the weight of a smooth stone in the palm of your hand, it’s hard to turn your nose up at a lighthouse in a storm. Who am I to deem it irrational for someone to slip a protective rose quartz into their carry-on luggage if it helps quell their fear of flying? If it ultimately makes you feel more at peace, then it’s working, whether that’s a matter of chakras, the placebo effect, or a combination of the above. If it makes you feel more sure, closer to the truth, more aware, then it’s working. At the end of the day, we all just want to have our answers before the coin lands.