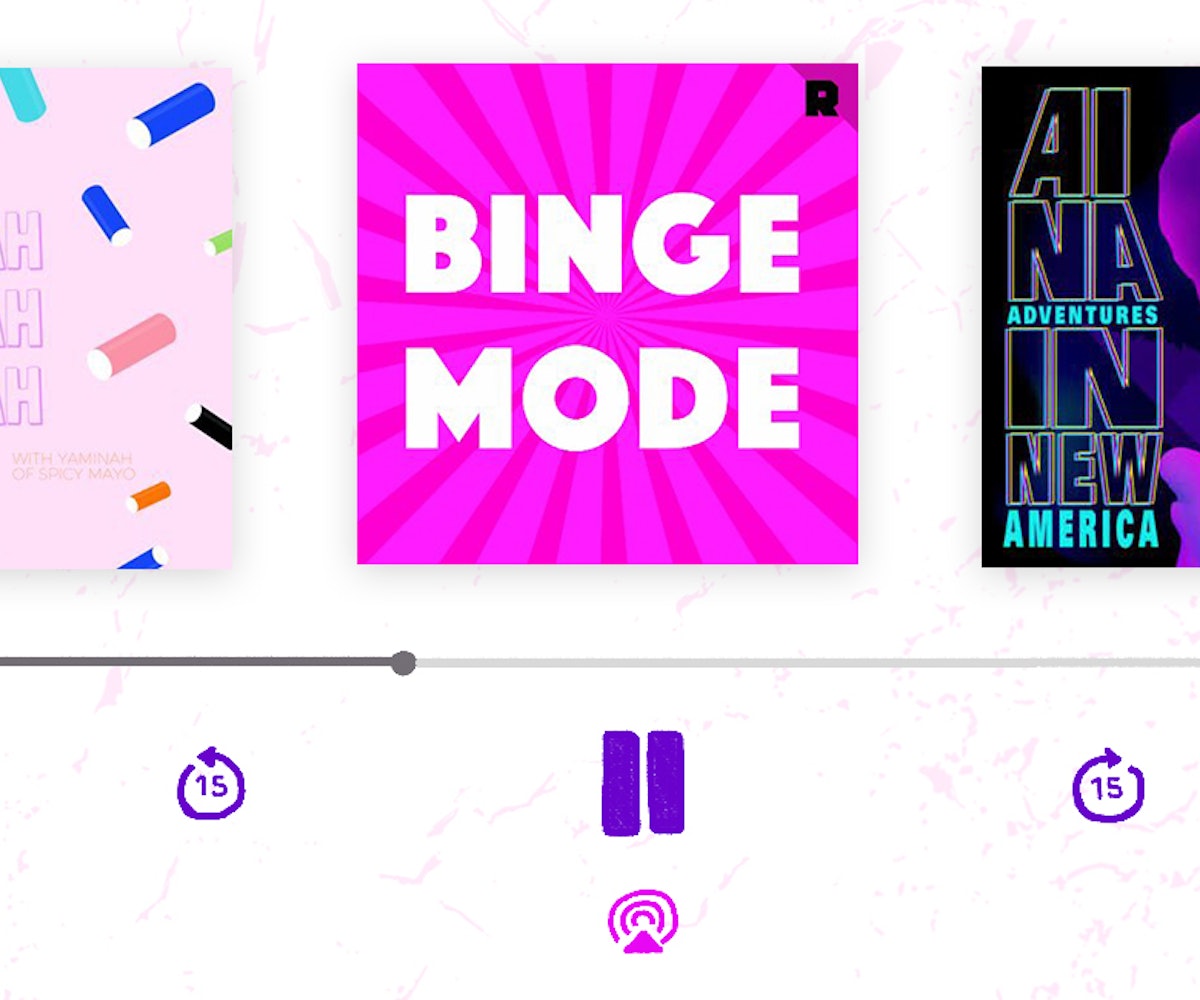 When spring (weather) arrives, it’s going to be great. You’re going to spend so much more time outside. You’ll take the long way home. You’ll actually leave the office for lunch… and coffee… and midday mental breaks. And during those times of freedom, you’ll need something to listen to. Sure, the new Cardi B album is amazing and Drake’s song is already a contender for bop of the summer, but in between those, try listening to a podcast.

Last year brought us an overwhelming amount of great new shows, but this year is bringing us even more. If you're getting tired of filling your headphones with the same voices week after week, we've rounded up some fresh shows to take up space on your phone. Some are brand new, while others are new seasons of already-existing shows that will focus on different topics (like Harry Potter and Russian hacking). Either way, you should queue them up and say a little prayer that warm weather arrives soon.

Before you listen to this new series from WBEZ Chicago, you should listen to Making Oprah. You don’t have to be familiar with one to appreciate the other, but it also won’t hurt (plus, they’re both just really, really good). Making Obama focuses on the 44th president's rise and reign. The story is told by the man himself, with some outside help and perspective from key advisors, mentors, and rivals.

Want to know how a millennial thinks? Listen to “Blah, Blah, Blah.” Hosted by blogger Yaminah Mayo, the podcast tackles everything from imposter syndrome to why Tiffany Pollard is the hero we all need right now. If you love having Mayo and her unfiltered thoughts pop up on your Instagram as much as we do, you’ll love them even more in your ear.

Is depression a necessity to be funny? Launching next month, Mrs. Brightside will “explore depression with wit and warmth,” focusing specifically on comedians. The host, Susan Calman, is a comedian herself and has written a book about her own experiences with mental health before. “The more we talk, the better it gets,” she writes on Twitter.

From the producers of Welcome to Night Vale, The Adventures in New America (launching April 20) is at the top of our most-anticipated list. We’re sold on the description alone, which reads: “A wild blues and afropunk-tinged ride through the New York City of New America, a country not so different from our own, where jobs and healthcare are hard to come by and bad news is a constant presence... except that it’s also populated by vampire zombies from outer space.” Sold.

As if Marvel wasn’t already taking control of our entire lives, the company has created its first scripted podcast. It will follow X-Men favorite Wolverine as he tries to escape from society, but ends up becoming the primary suspect in a serial murder case. It’s like if Serial took place in a comic book.

NPR’s Invisibilia has been going three seasons strong and, through the years, co-hosts Hanna Rosin (who replaced Lulu Miller) and Alix Spiegel have tackled topics like the absence of fear and the interaction between humans and computers with classic investigating and impactful story-telling. This season, they’ll explore Russian hacking, reality television, and #MeToo—all different and yet very much timely topics. “We’re living in a black and white world, where the stories we tell ourselves lock us into one side or the other,” a description reads.

In 1948, three black farmers in rural, southern Georgia decided they were going to vote. Throughout the podcast, Pulitzer prize winning author and journalist Hank Klibanoff will explore what happened after one of the men, Isaiah Nixon, was killed, and further examine the racial tensions of Jim Crow Georgia.

The Ringer’s Mallory Rubin and Jason Concepcion go deep on topics they’re into, which might mean diving deep into Jessica Jones on one episode to going long on Ready Player One the next. Occasionally, though, they’ll go real deep, unpacking one specific pop culture franchise. Last year, it was Game of Thrones, and next up is that other otherworldly series people were obsessed with before Game of Thrones came along: Harry Potter. Get your wands ready.

2 Dope Queens star Phoebe Robinson once said that comedian Michelle Buteau should be “Amy Schumer-level famous” and, well, we hope she goes even further. Buteau's new podcast is touted as a combination of the fun nature of late night shows with the intimacy of a daytime program. She asks hard-hitting questions like “what’s even the point of a buffet?” with guests like Leslie Odom, Jr. If you’re in the NYC area, you can even catch a live taping of the podcast, should you feel so inclined.

For its first serialized podcast, ESPN is jumping into the complicated world of Bikram Yoga. Reported and produced by Julia Lowrie Henderson, the series will explore how guru and founder Bikram Choudhury built his empire and the current state of the community, which has been shook by recent sexual assault allegations brought against Choudhury. “Approaching a community that I once was a part of—and thought I understood—only to realize how much I didn’t know and how great a toll one man’s struggles have had on his followers has been quite a rollercoaster,” Henderson has said about the podcast. “Questions of identity are never easy, especially when yours becomes so intertwined with someone else’s name. I’m grateful that this story is getting the platform and space that it deserves.”