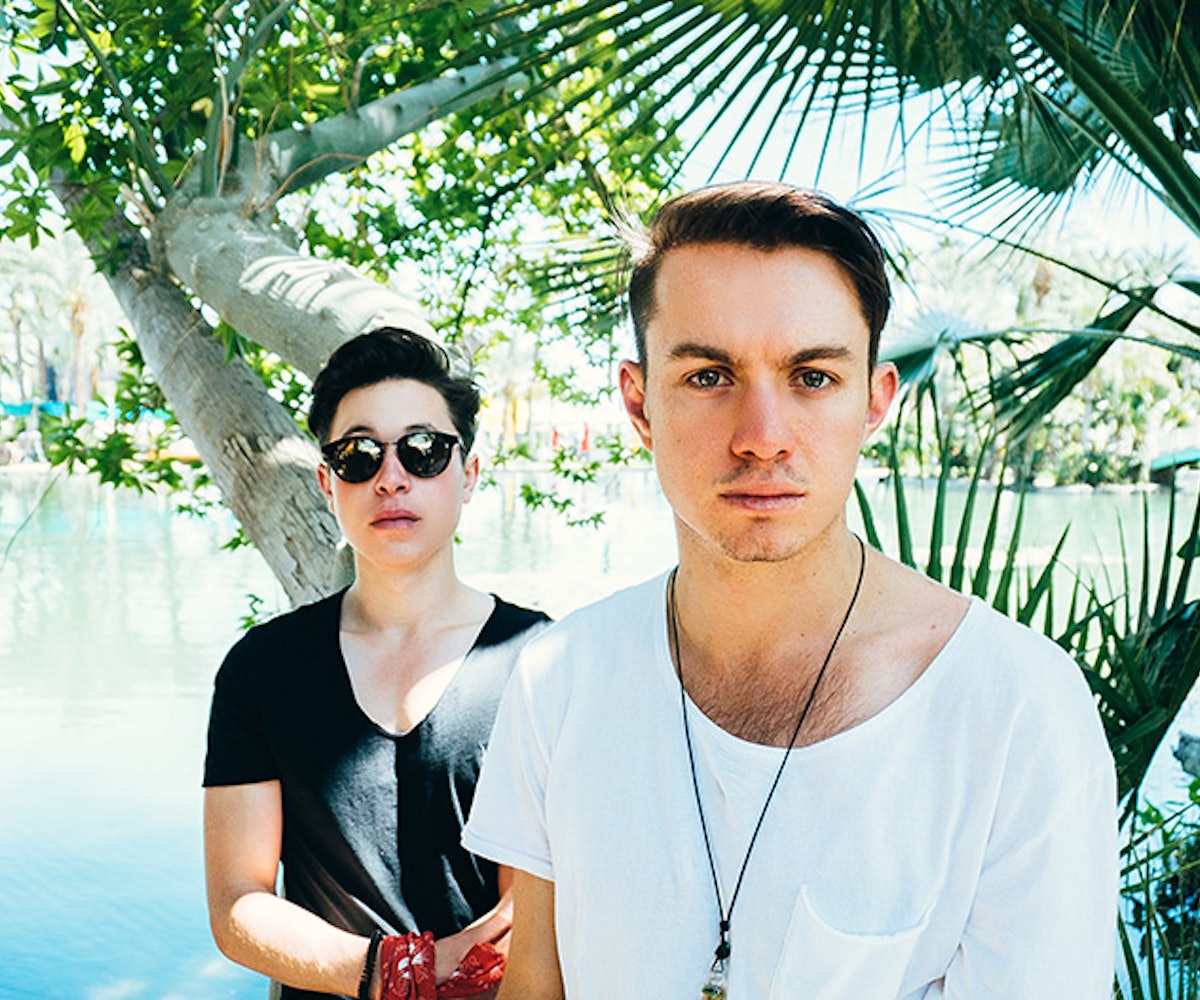 Music festival season is, first and foremost, about discovery. Sure, the headliners draw the crowds but the element of finding a new band is the blood that pulses through these special five months or so. This year, Strangers You Know has already played Coachella and is slated to take over Hangout Fest this month. They have a gig at Firefly in June and more shows after that. For a band still riding high on EP hype, that's pretty stellar, and a sign they're doing something special.

Together, Grady Lee and Adam Haagen make up Strangers You Know. Their latest EP, Loosen Up The Leash, flirts with pop, folk, funk, and electronica. It's a formula that could only be accomplished by these two: Haagen's a country fan while Lee pines for hip-hop. Their live sets are upbeat and infectiously good—exactly what a festival setting needs—and strong enough to make a lasting mark on fresh ears. Strangers You Know won't be strangers for long. Well, at least, not after this interview that is.

How did Strangers You Know come about?

GRADY: We met at Coachella and decided to try combining our two pretty different sonic interests into something new.

ADAM: Well, the name actually came from New Year's Eve three years back. I’ve grown up going to a little town called Ketchum, in Idaho, and shortly after forming the band (then called Reprise) I took Grady up to my little cabin for a trip. In a wild turn of events, he goes out my front door to the ice rink across the street and starts talking to the only people there—two girls around our age. I joined them a few minutes later, and after many more minutes of talking, me and one of the girls realized we had known each other for years. She was my ex-girlfriend’s best friend, whom I had only met a few times since she was away for university. That night we laughed about the coincidence, and the phrase Strangers You Know was written down, just to remember after one of us said it. (We argue to this day over which of us actually coined the phrase.) The next day we woke up, and after seeing the name, it just made sense. By nightfall, we had rebranded the band, and we’ve been Strangers ever since.

If you could describe your sound in emoji, how'd you do it?

G: The chocolate emoji, because you never know what you're gonna get.

A: Probably the little cone thing surrounded by confetti and little streamers. We draw from so many different sources and genres, that when we create, it tends to be a sporadic outpouring of all the little inspirations we’ve picked up over time.

What is your most memorable Coachella moment? What about music festival moment, in general?

A: It’s hard not to say playing Coachella was my top moment, but I regard it more as a surreal yet necessary step rather than some climactic moment. My most memorable moments, however, come from the Monday following the festival when our entire clan of friends invades a small bar/restaurant called Cactus Jacks. Debauchery commences for the better part of the day while everyone drinks, shares stories, and gives speeches.

G: Playing certainly stands out as a monumental experience so far. Seeing Paul McCartney at Outside Lands a few years ago literally brought me to my knees. I saw a Beatle and felt like a high school girl in the '60s.

Was music always in the cards for you?

A: Music has been with me since the moment I was born. I grew up on my parents' records of Neil Young, Tom Petty, The Beatles, Elton John, etc. By the time I was eight or nine, I knew I wanted to be able to play like all the musicians I admired. From learning the piano at that age on, I’ve always known music would play some important role in my life, but it hasn’t been until recently that I discovered it's a viable option to actually pursue full time.

G: I think so, but there was a lot on my deck and it took a while to draw that card. I found music became a necessary means of expression in high school, but was a necessary component of my life prior.

Is there a particular song, artist, or moment that convinced you, you wanted to pursue music?

G: Yes. John Mayer playing "In Your Atmosphere" was the pivotal moment for me. I heard so much of myself, it was like he'd beaten me to a song I was supposed to write. Either that or watching Frank Ocean perform "Forest Gump" at Coachella. I promised myself then that I would play on that stage.

A: I remember seeing Beck when I was pretty young—probably not even a teenager yet. I was completely enamored by the fact he could run around stage and play everything from guitar to piano to Harmonium to harmonica. It was just around that time I began to pick up the guitar and drums, so it really served as an inspiration to keep on the path of picking up and learning everything I possibly could.

How do you two influence and challenge one another?

A: Grady and I really cover the gambit in terms of our influences, musical preferences, and writing styles, but it’s really in the tension between us and what we’re trying to create that helps to form our unique dichotomy. Personally, I always gravitate to a good song before anything else, be it production or its target audience. I spend my time listening to stripped-down folk, Americana, country tracks, whereas Grady is much more into fully produced hip-hop and electronic music. We trade hats well and often, but if we had to choose positions, Grady ironically is more involved in the beginning of songwriting, whereas I take charge of the production on many tracks.

G: We both love most types of music, but generally we each provide certain elements consistently. Adam is like the icing on the cake or the skin on the skeleton of songs I write. He's extremely critical and doesn't settle for mediocre, so we're always revising until we're both happy. I think we've done a good job of exposing each other to music we wouldn't have otherwise gotten into. I never listened to country before we started working together and I showed him the good avenues of hip-hop and electronic music.

What do you prefer: performing at music festivals or being in the audience?

G: Performing. Without a doubt. It literally doesn't feel real being on the stages; I'm still wondering if I'm going to wake up. That's not to say being there isn't one of the most bonding and magical experiences you can have—some of my best memories are with arms swung around best friends swaying in a sea of thousands to an artist we'd never heard before.

A: The rush you get while playing a festival, and being the one to win over a crowd cannot be matched, but I’ve had some of my best times in the audience watching others and being absorbed in the moment.

What was your first concert? First CD you purchased?

G: My first concert was Green Day and first CD was By The Way by the Red Hot Chili Peppers. I still know every word to that album.

A: My parents actually took me to concerts ever since I was an actual baby, so it's hard to pinpoint what the first show I saw was. I do have early memories of watching Coldplay when I couldn’t have been older than five and Parachutes had just come out. I’d say that sticks in my mind as one of the first time I consciously watched a band whose music I actually knew.

Your music spans a variety of genres—what's a fantasy genre for it?

A: Like what I’d call it? To be concise, maybe something like electronic alt-folk or pop-hop… That kinda encapsulates most of what we do. We’ll always be across the board in terms of genre blending, so it's hard to pinpoint our entire body of music as this or that; it's really quite fluid. We’ve begun writing fresh off the release of Loosen Up The Leash and it's already quite evident that we’ll have some unique sounds and concepts we’re testing out.

What are you most proud of to date?

G: Having thousands of people cheer for my mom being in the crowd.

A: The release of our last EP along with starting off our tour at Coachella really make me proud, not only because they are monumental events in and of themselves, but they serve as a dividing point between what Grady and I have been working toward for years now, and where we hope to go. Our EP is the first time we’ve truly expressed our completely unique approach at tackling pop music, and I believe it's the most honest representation of who we actually are both in our lives and musically.

G: Making a million new friends in the US.

A: Only as of very recently, the engine has just begun to pick up speed in terms of our lives and careers. This year I’m just trying to keep a level head and absorb everything I can. For the first time, I’ll be exclusively traveling for months, so maintaining those important relationships back home is definitely going to be important for me. I’ll also continue to try and teach Grady some etiquette, but that’s really a lost cause at this point...