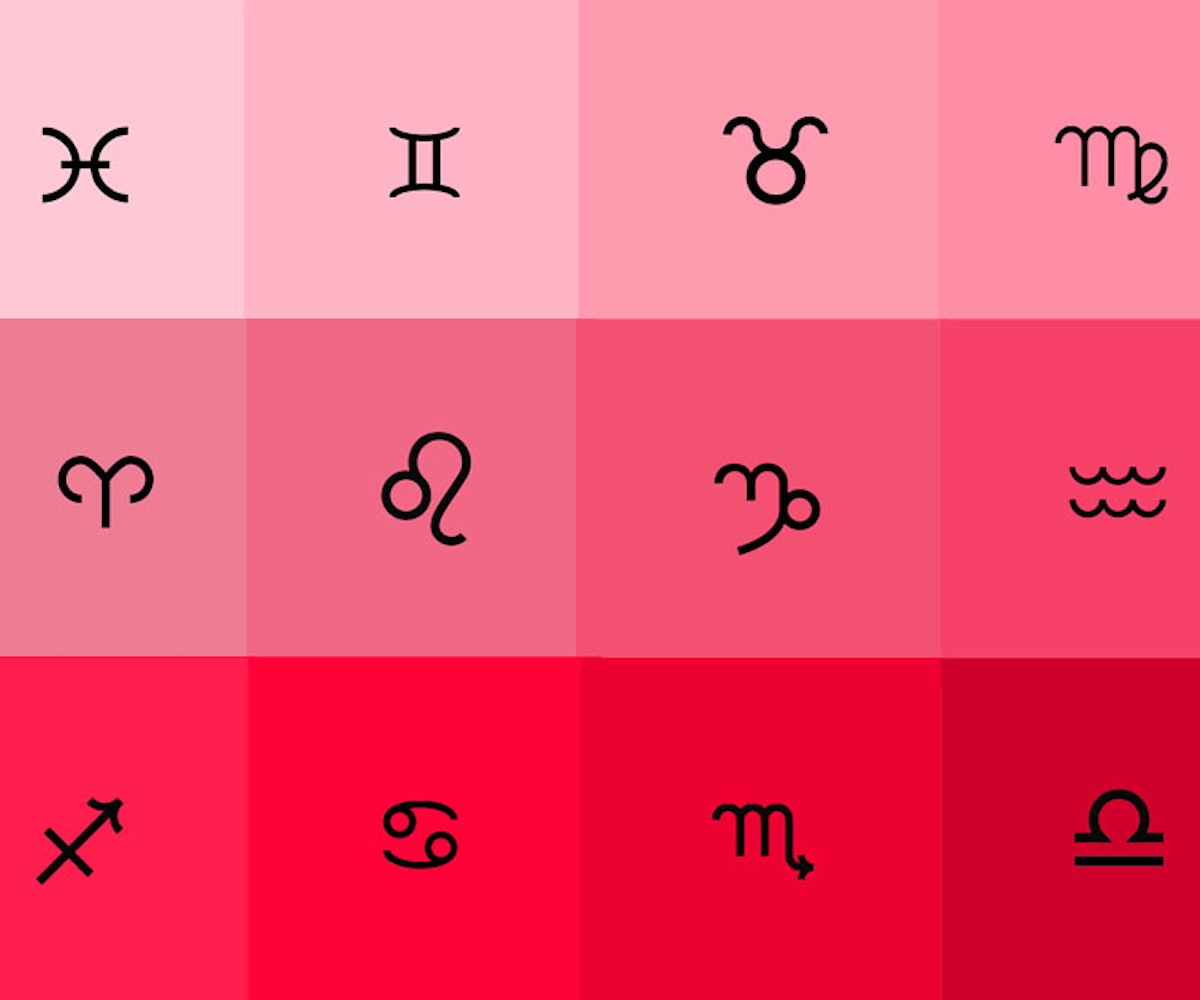 Summer starts on an indelibly steamy note, with almost all 12 signs fixating on flings and hookups in June. But just as you lean in for that kiss, Venus, the planet of love, romance, and sex, takes a giant step backward into a retrograde period lasting from July 31 to September 6. Bummer—right? Not necessarily.

Venus’s retrograde period is a rare fruit of summer 2015, even if it’s more about setting the foundation for better love connections later this year and into the next. And with Venus perching on prideful Leo during her journey, most lessons during this period will focus on self-love. Because in the sage words of RuPaul, “If you can’t love yourself, how the hell are you gonna love somebody else?”

That doesn't mean that you'll be left high and dry this summer—plenty of opportunities for endlessly romantic, hot summer nights abound.

Love revolves around mastering the art of communication, either by getting to know a new love interest or working out the kinks in a long-term relationship. From the beginning of June to July 18, Venus will send sweet missives to your third house of communication, making whatever talks you have—or body-language signals you receive—especially stimulating.

Just as things get interesting, Venus will call a timeout and enter a retrograde period until September 6, throwing a wet blanket over the fire you’ve been fanning all summer. Boo’d-up Geminis will find it nearly impossible to come to a clear-cut decision when it comes to choices made together. Geminis considering cohabitating or making it legal will likely experience a classic bout of airy indecision and second-guessing, much to your partner’s vexation.

What’s more, your ruling planet Mercury will retrograde through your house of true love on September 17. Getting back in touch with an ex may have you looking over your shoulder at the past and wondering if it’s really over between you two. Remain present and live day by day, Gemini, just don’t ignore the lessons.

Attached Cancers should keep an eye on events around the full moon on July 1, when things are poised to be prickly. A turning point in your relationship is at hand and may culminate with a separation or complete break. Don't lose faith, especially around the new moon on July 15.

Do not squander early summer’s sweet vibe, Leo, but don’t be misled, either: This season’s theme will be personal growth, and the lessons—especially in love—will hit hard. You’ll be the hot-ticket item from the beginning of summer until July 18, with love doctor Venus making a call to your sign. Take advantage of this period to polish yourself up. You’re being noticed.

July 31’s seismic shakeup will change the entire love landscape when Venus backslides into a retrograde period. Confusion abounds as you second-guess everything you thought you understood about love—and what you have to offer a partner. Luckily, from August 8 to late September, Mars will remain in your sign, making it possible to overcome love-related fears. Superficial tactics to gain love will blow up in your face; looking internally is key.

If you’ve been involved in a clandestine love affair—or have been obsessing over forbidden fruit—be warned: The distinct possibility of a Domino-effect revelation is nigh this season. Especially prominent is the Venus retrograde period from July 31 to September 6, when the sensual planet creeps backwards through your house of hidden agendas and secrets. Virgos who’ve been living in a fantasy land or have been dealing with deeply unhealthy relationship patterns will need to take this time out to look within for answers. Have faith in yourself: You deserve better. A solar eclipse on September 13 rides in like a white knight, giving you the fresh restart you need right now.

Your social calendar will be overflowing as the summer kicks off, with plenty of options for a thrilling fling (or seven). Committed Libras should cast away sexual comfort zones and get freaky with bae around the full moon on July 1. Your wildest dreams are possible now.

Single Libras have the odds in their favor for meeting new people, especially through social events all summer. If a friend is dying to introduce you to someone, seize that opportunity—you never know who you could meet. Another possibility for single Libras is the transition of an existing friendship into a new, romantic partnership. A good idea, no doubt, but be prepared to reconfigure some aspects of your new relationship when Venus goes retrograde on July 31.  Be aware of any friends that may be meddling in your love life; they’ll get the boot once Venus turns direct on September 6.

Mysterious Saturn—often the teacher of hard lessons—will flirt with the finish line in his tour of your sign, finally exiting on September 17. Although he’ll be particularly cruel to your financial sector, his presence will light a fire under you to fix your love life before autumn. Scorps who do not succeed in mending existing wounds or transitioning a casual relationship into a concrete commitment this summer will lose their opportunity with that person—period.

Because your professional prospects have taken such a hit lately, you may feel especially sensitive to how much support you receive from your boo. Your ego is eggshell fragile, but do not use that as an excuse to build walls around your heart, especially around July 14 and August 5. Single Scorpios have a chance to hit it off with someone who’s caught their eye around the gorgeous full moon on August 29. Acknowledging a spiritual connection will set the mood.

You may feel gripped to dive to the deepest depths of your relationship from June 24 to early August, especially if you feel that true intimacy is lacking in your connection. Going where you’ve never gone before will have an unmistakable allure, especially when it comes to exploring fantasies in your sex life. Don’t be afraid—you’re in for a delicious treat.

Tantalizing adventures flourish in July, and single Sags may feel unusually spellbound by someone new who isn’t your “type,” especially around early July and again in mid-August. One word of warning: Avoid involving your friends in your love life in September. Not only will their advice be utterly unhelpful at best (and destructive at worst), your frustration will likely spark a feud that you simply do not have time for.

From June 24 through August 8, Mars will ignite your partnership sector in a transit that is sure to get your blood pumping to the right places. Motivation to spice things up will become the focus for attached Capricorns, but be careful not to shake things up too much. Your enthusiasm may be misinterpreted as selfishness during this period, which could spark annoying and unnecessary strife in your relationship. Either way, you’ll have the energies you need to make seamless repairs. Plus, the makeup sex will be insane.

Around July 8, you’ll have yet another rare opportunity to share a new level of spiritual attachment with your partner. The July 15 new moon will reinvigorate your senses, making way for a fresh start. Alternatively, if you’re dating someone new, you may decide to lock it down now. Once Venus goes retrograde from July 31 to September 6, shared finances may need your attentions—or reevaluate your new love’s financial capabilities in combining lives and incomes.

Aquarians submerged in new relationships may suddenly experience cold feet on taking the plunge into commitment this summer. Now is the time to take stock of what you’re getting into; just be delicate with your words around your sweetheart. On the other hand, those in established relationships may need to engage in deep meditation on the future of their union. Regardless, adjustments and lasting fixes will need to be made to keep your love afloat.

When romantic Venus moves direct in your seventh house of partnership from July 31 to September 6, there will be no questions about where the future of your relationship lies. If your relationship can stand the blows, it will not only survive this period, but thrive, ultimately emerging stronger than before. Single and coupled Aquarians will receive a powerful refresh from the universe on August 14—a perfect day to make it official or renew bonds.

Whether you’re looking for love or not, this summer will be brimming with romance and hot passion. From June 24 to early August, Mars will bring the party to your fifth house of pleasure and romance. Having fun will be your main priority now, but the extra heat in your sex life will keep you pleasurably busy. Pisces in relationships will spend more time getting inventive in the boudoir, but singles will have zero problems hooking up this season. Make the most of those social opportunities if you’re looking to get laid—especially around the new moon on July 15.

You may feel ready to commit to someone truly exceptional around August 11 when Jupiter enters your house of long-term partnership for the first time in 12 years. This could spark a yearlong relationship cycle with someone new, or make an existing partnership grow into something even more beautiful.

The hottest season of the year is shaping up to be just that—hot. But this summer isn’t just one steamy fling after the next, Aries (not that there’s anything wrong with that!).

Jupiter combines his luck with Venus’ beauty and sensuality as they dance through your fifth house of true love for most of the summer. You likely noticed this with June's pivotal events with someone special that sent you soaring. Although you began summer on completely NSA terms, you’ll be surprised by how emotionally confusing this season may actually become when the L-word is mentioned. Don’t sweat it, though. You’ll have plenty of time to find your footing again once Venus goes retrograde on July 31, forcing you to reexamine whether or not you’re truly ready to be in love. Tests of strength in your love life will be a focal point until September 6, but with Mars touring Leo at the same time, you’ll have more than what it takes to come out on top.

Sparks fly as Venus makes a hot cameo in your true love sector on July 18, convincing you that an epic romance is about to pop off. By the time summer starts, you’ll have already mentally committed yourself to your mysterious prospect, only to immediately run out of steam and slow to a turtle’s pace. But that’s not necessarily a bad thing...

Your ruling planet, Venus, will hit the breaks when she goes retrograde on July 31, shifting the focus to your family life. With the possibility of a relative reaching out for help looming, love becomes less and less of a priority until the retrograde ends on September 6. Once your domestic situation stabilizes, your love life will begin to blossom, especially around September 13 when a solar eclipse and Jupiter tag-team your fifth house of true love. Summer winds down with an electrifying, almost-karmic tsunami hitting your love life, creating the possibility of beginning autumn with the love of your life.