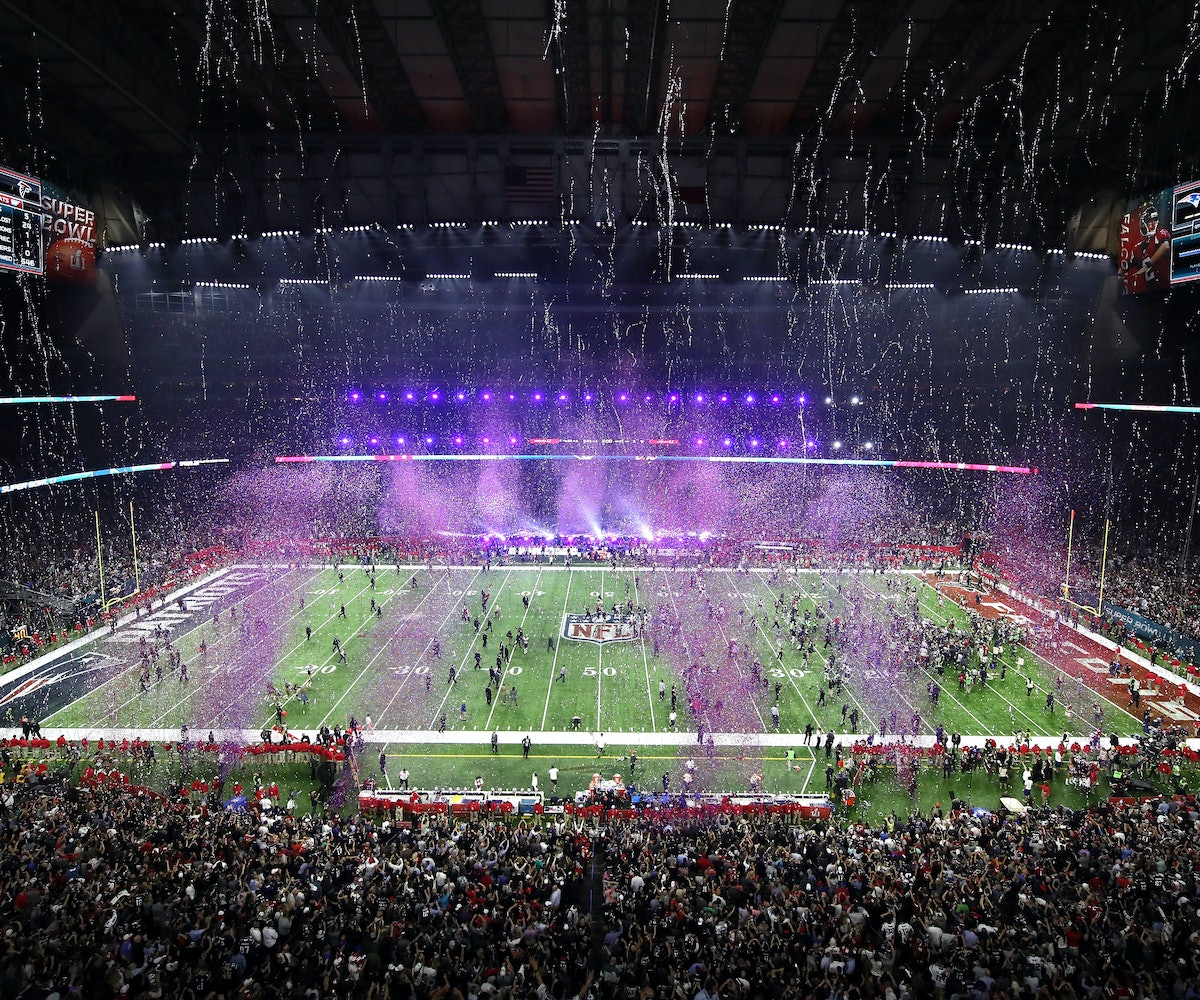 It’s been nearly a week and the whole thing still feels like a dream. In late January, I received a text message from a colleague saying that Budweiser wanted to fly me to Houston, Texas, to watch the New England Patriots take on the Atlanta Falcons in Super Bowl 51. I was stunned. The Super Bowl is something you watch on TV, at a friend’s apartment or a crowded sports bar. It’s not something you get to witness IRL. Everyone knows football is better on TV, but this was more than just a football game. It’s a Lady Gaga concert. A celebration of America. The most watched event on the planet.

I was even more stunned when another text message popped up saying that I could bring a guest. One week later, me and my brother met at Houston’s George Bush International airport for a weekend of festivities that I’ve only heard about but never experienced. Those legendary parties that happen in the week leading up to the game, thrown by corporations like Fox and ESPN and DirectTV, who don’t hold back when it comes to spending.  Taylor Swift, Fergie, and Bruno Mars, and way more were performing at these parties all week long. We didn’t know it at the time, but all of it would culminate in arguably the most thrilling Super Bowl in NFL history.

Bud Light took over the Magnolia Hotel in the heart of Houston’s downtown, which, given that it was Super Bowl weekend, felt surprisingly deserted. The lobby was transformed from a pleasantly bland room into a vibrant shrine to the NFL. Beer cans with every team’s logo adorned the walls, and football iconography was everywhere. NFL great Doug Flutie was chatting at the front desk as we checked in. It was all starting to feel real. On the second floor, an open bar left no one thirsty and everyone chatty. Two dudes on the piano covered the Chainsmokers with extra pep, and everyone was in a great mood. And while the game was all anyone could talk about, Budweiser made sure we’d get to experience not just some of the exclusivity of Super Bowl weekend, but the city and culture of Houston as well.

On Friday night we hit the Budweiser Country Club where Thomas Rhett—a rising country star who looks more like Justin Bieber than Toby Keith—played a long set of his hits, including “Die a Happy Man,” which is nominated for Best Country Song at this Sunday’s Grammys. I’m not a huge country fan, but some of Rhett’s songs veer more towards traditional pop, and I could see him taking his career in the direction of another singer who started off in country before conquering the pop world (that singer was scheduled to play the big DirectTV blowout on Saturday night.) With the Houston skyline as a backdrop, Rhett’s set was a surprisingly fitting kick-off to the weekend.

On Saturday, we went to ground zero of all Budweiser operations in Texas, which happens to adore its beer. The Budweiser brewery is the second largest in the country behind the mother ship in St. Louis, and if you’ve ever seen a brewery, you’ll know the dizzying production process that goes into making the stuff you nonchalantly slug back during a game of beer pong. The people we met at the brewery talked about their work as if they were scientists, not brew masters, and the machinery they used looked complex and imposing. A central control room, with screens on screens on screens running complicated equations was so heavy that I needed a drink. By coincidence, the next stop was a bitterly cold room filled with giant tanks that we soon found out were filled with Budweiser. It was Budweiser we got to drink. The freshest Budweiser you could possibly drink. It tasted good, like Budweiser.

After a stop in Houston Heights, which we were told is Houston’s version of SoHo thanks to all the boutique shops (shout out to Manready Mercantile), we headed to the city’s outskirts to visit a Houston institution. From the outside, Johnny Dang & Co., looks like it could be your average jewelry store except for a few giveaways. There’s the gold Porsche in the parking lot. There’s the step and repeat by the entrance, a sign that this store was also a venue for some of the weekend’s events. (To be exact, football legend Ray Lewis held his Super Bowl party there on Friday night.) And on the inside there is Dang himself, a very short man but larger-than-life figure who is famously responsible for the grillz and bling you see on your favorite rappers and athletes. When we meet Dang, he shows off his bling proudly, and pictures of him with the likes of Drake and Nicki Minaj adorn the walls. He takes us into the back area, where dental molds for NFL players sit casually on tables, and where workers are craft grillz with laser precision, literally. A high-tech laser machine is searing the Budweiser logo into a pair of gold grillz, and we each got one.

That night, Houston lit up with parties, like the annual Maxim celebration and the DirectTV party featuring a performance by Taylor Swift. We found ourselves at the Budweiser-sponsored Rolling Stone party, which was held at the Museum of Fine Arts, and basically transformed it into a massive club. The legendary music magazine was using the event to celebrate their 50th anniversary, and as you might expect, it was packed with celebrities from the sports and entertainment worlds. And while the DirectTV party might have had one of the biggest stars in the world performing, Rolling Stone was more interested in turning up, with a lineup that featured Big Sean, DJ Cassidy, Nas, and Diplo, who brought out Busta Rhymes during his blistering set.

Every football game needs a proper tailgate, and the Bud Light-sponsored tailgate wasn’t your average parking lot party. Held inside a giant convention center next to NRG Stadium, the pre-Super Bowl party felt at times more like a Las Vegas trade show than the tail gates I’m used to (shout out to Buffalo Bills fans, who are insane and insanely fun), but with catering by STK and open bars, it was hard to complain.

Most of the weekend was overcast, but just as the 70,000-plus fans began to descend on NRG, the sky opened up and the sun shone down on Houston for the what felt like the first time all weekend. Being at the game, seeing all the pomp and circumstance, like President George Bush and his wife Barbara--freshly out of the hospital--emerging onto the field for the ceremonial coin toss, it all felt surreal. I’ve always wondered how a massive apparatus like a stage is put together over the period of a commercial break, and now I had my answer (with the help of hundreds of people). Even when the game seemed out of reach, with the Falcons at one point leading the Patriots 28-3, it was impossible not to remain utterly transfixed by your surroundings. Everyone in that stadium knew that no matter what happened, they were witness history. And that was before un unthinkable fourth quarter unfolded, and the Patriots won the game in the only overtime in Super Bowl history, transforming number 51 into arguably the greatest championship game of all time.

NEXT UP
Astrology
How to Use Astrology to Access Past Lives
Culture
6 Shows To Binge Once You've Finished 'The White Lotus'
Beauty
“Birthday Makeup” Is Sparking A Battle of The Sexes On TikTok
Culture
13 Valentine’s Day Gifts Under $100
Style + Culture, delivered straight to your inbox.