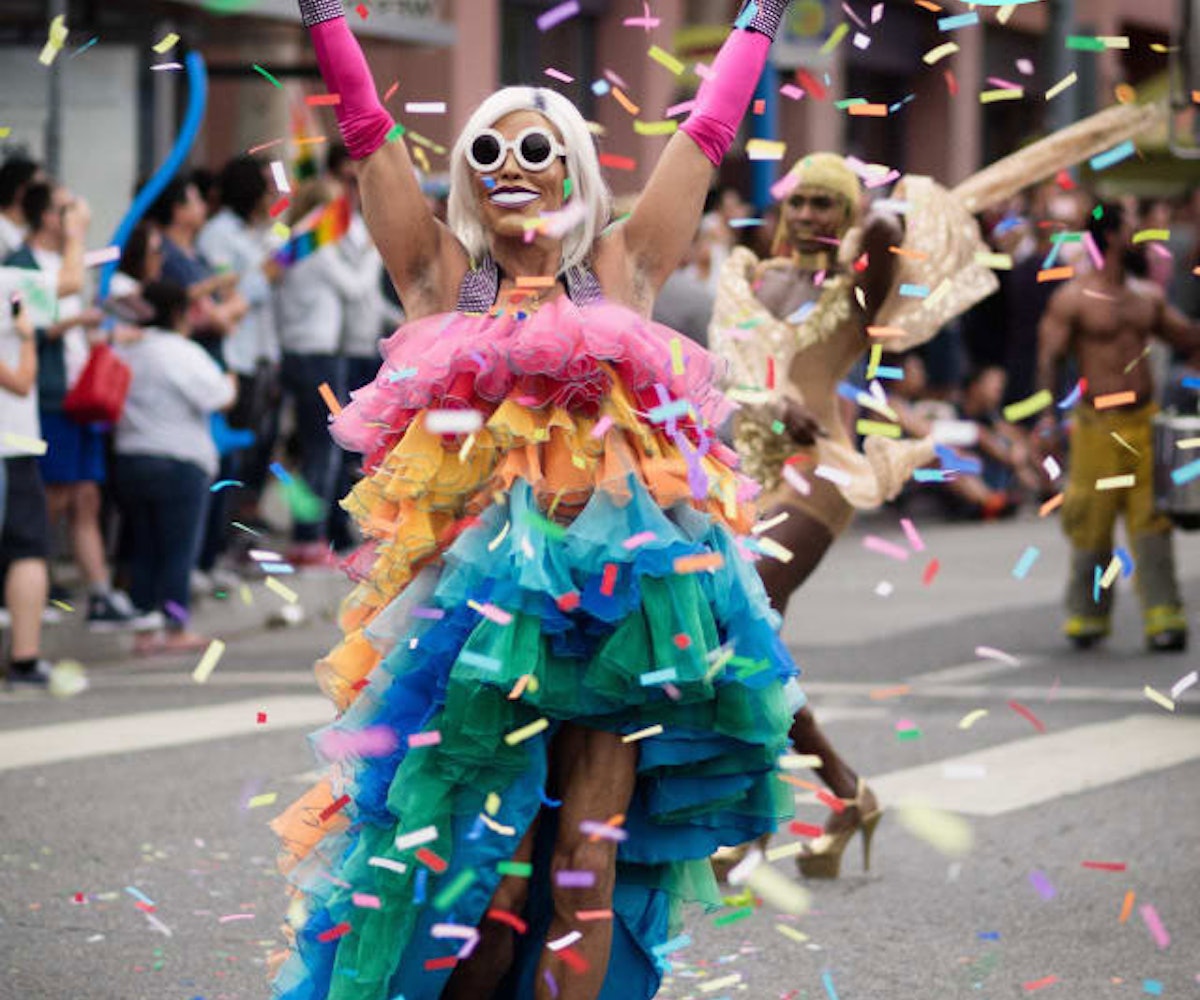 In the age of social media and increasingly mainstream, corporate-sponsored events, Pride Month can seem like one big party. What is often missed by allies witnessing sparkly parades and rainbow-filled social media posts is the profound grief and rage that accompanies Pride for many in the LGBTQ+ community. This is why one of the most meaningful things you can do for your LGBTQ+ family and friends this month, is to show up for them.

Here in the United States, the psychological, emotional, and even physical duress that the community often experiences has been further exacerbated by the current administration and an onslaught of legal challenges to LGBTQ+ rights in state legislatures. Here are some tips on how to support your loved ones this month—and every month.

Check in with your people: Text or otherwise message your friends a few more times than you perhaps normally would this month. Ask to get coffee, to get drinks, to take a walk around the neighborhood. Tell them you’re thinking of them. Tell them you love them. One key date to keep in mind this year is the anniversary of last year’s Pulse shooting in Orlando, Florida: June 12. Forty-nine people were killed and 58 more injured during the gay club’s Latin night in one of the most horrific attacks of terror in recent American history.

Don't take it personally if you don't hear back: Pride is a month of celebration, but it's also a month of mourning, for the rise in hate crimes and the fact that our vice president actively endorses conversion therapy; for the elders we don't have who were lost to AIDS, an epidemic which became a state-sanctioned genocide under the Reagan administration. (Watch We Were Here on Netflix or YouTube.)

This month, we are reflecting on how far we have to go. As of 2015, the life expectancy for a trans woman of color was 35. The vast majority of LGBTQ+ homicide victims are people of color and, of those, more than 70 percent are trans women. Some months, it seems like queer media outlets are reporting the murders of trans women of color on a weekly basis. Just last week, a gay woman in Brooklyn, New York, was beaten unconscious on an MTA train—and that’s a city that many regard as a liberal haven. These are unacceptable realities that LGBTQ+ people live with on a daily basis.

It’s not you: it’s society.

Devote time this month to self-education: Allyship is not an identity; it's a verb, an action, a process. It's a thing you do, and a thing you're always improving at. This is as true for LGBTQ+ folks learning to ally others in our own community as it is for cis-het folks learning to ally their LGBTQ+ friends and fam. There is no shame in not knowing something, only in refusing to acknowledge that you don’t know everything.

I'm here to tell you that it's okay you don't know, that Google is your friend, that GLAAD has a ton of resources aimed at the media but written in a really accessible way, and that you should definitely be reading Autostraddle, The Establishment, Everyday Feminism, and other queer-friendly outlets to learn more (like the fact that the rainbow flag doesn’t apply to everyone in the LGBTQ+ community).

Be an ally, and don’t be afraid of “doing it wrong”: Since Donald Trump was elected, I’ve had a lot of conversations with friends and acquaintances, both online and offline, about allyship and advocacy. To paraphrase, this is what I most often hear: “I want to be an ally. I want to tell people I care about them. I am horrified by what’s happening, and I want to speak up for the marginalized. But I’m worried about doing it wrong.”

You can never please everyone, and the idea that allyship is an endeavor which could or would please everyone is unrealistic. It’s partly a fear of perfectionism—the most benign weakness to offer up in a job interview—and a fear of internet callout culture, where one misplaced word could result in a huge Twitter backlash.

But ultimately, this is a fear of vulnerability. A fear of being willing to live and learn and even fail out loud. A fear of exposing the darkest corners of your heart that you may not yet have come to terms with. A fear of fucking up and losing approval, or not winning approval in the first place.

And this strikes at the heart of the issue: Allyship is for the group of people you care about, but you, as an ally, are not talking to those people. This is a fundamental misunderstanding of the application of allyship.

Cis-het folks’ job as an ally to their LGBTQ+ friends is not to go to Pride or wear rainbows (although that is nice, of course); it is to have the hard conversations at work and at home, it is to discuss inclusive hiring with their managers, it is to donate to LGBTQ+ charities with the rest of us, it is to call their congresspeople and protest the discriminatory legislation, it is to boost awareness of the targeted murders of LGBTQ+ people so that, yes, America can see that in spite of marriage equality, it does happen here.

This is how you support us, during Pride season and beyond: by working to affirm our dignity. Pride is not a one-time event any more than allyship is a one-off march with a pussy hat. We do not stop being gay or queer or trans or bi or genderqueer after June 30, and goodness knows that discriminatory legislation and hate speech will not stop seeking the corners of our bedrooms, our offices, our bathrooms, our commutes, our families.