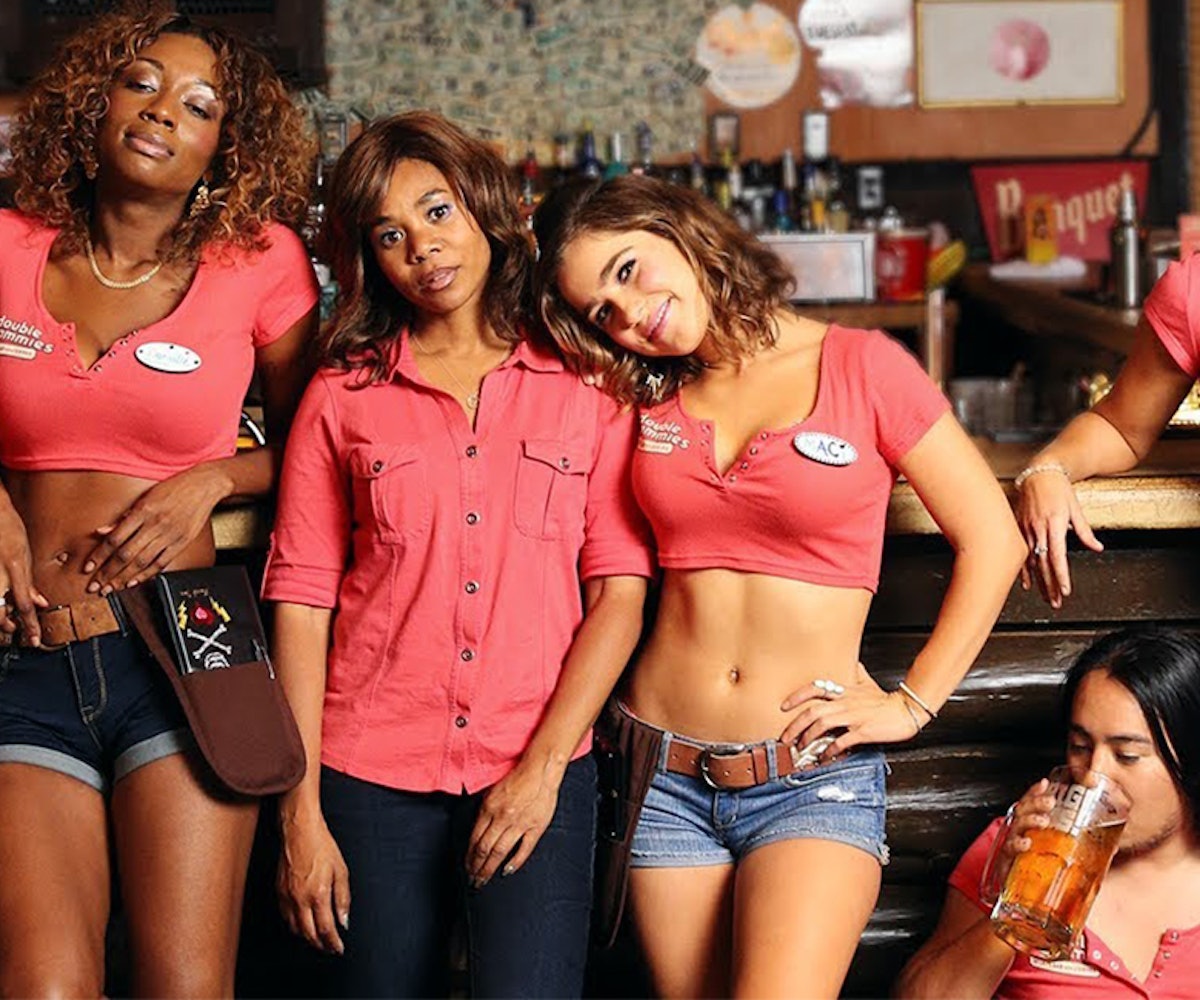 The thing that makes me feel most like a sucker about the food service job that still owes me $1,000 and always will isn’t the money—it’s that I didn’t steal a bottle of booze as a parting gift after my last shift. I knew the security camera wasn’t plugged in, and I knew my worth.

Writer-director Andrew Bujalski’s Support the Girls is a day-in-the-life of the front of house staff at a Texas breast-aurant called “Double Whammies,” and within this big-hearted portrait of female solidarity on the job beats a sinister truth: Too many of us mistake caring about the people we work with for caring about the jobs that will never love us back. The film is an indictment of how economic insecurity and America’s workaholic culture ensure that all labor is emotional labor.

The protagonist of Support the Girls is the character who takes her professional responsibilities the most personally: Lisa, the manager at Double Whammies, embodied by Regina Hall in a performance of such superhuman everyday dignity, she seems like an inspiration, not a victim. Double Whammies is a Twin Peaks-style sports bar in a strip mall parking lot somewhere in Texas (judging primarily from the license plates, and a few bits of locally skewed memorabilia on the restaurant’s walls), where girls in belly shirts and Daisy Dukes upsell “big-ass” beers. Hall exudes managerial authority, juggling shift-scheduling with the stuff her servers kick up the chain of command with a tearful or apologetic “Heyyy…” When Lisa eighty-sixes a day-drinking biker, she goes over to his booth knowing what she’s going to say, it’s not up for debate; she sets up a booth for the single mom who needs to use the restaurant as a free day care.

This is one of those satisfyingly structured films that introduce us to the rhythms of a typical day, then show it spiraling into more chaos than usual as the film unfolds—a balancing of engrossing sociology and theatrical crisis encapsulated as Lisa begins the movie crying in her car, then heads in to disarm the alarm. Realities of domestic abuse and everyday racism pop up almost offhandedly alongside even more offhand bits of miraculous portraiture—the way a character will say “in the meanwhile,” or listen to a police scanner app, or tell a waitress he barely knows that his wife “keeps me in check.”

To go along with the film’s title, at once a boob joke and a sincere, literal imperative to female friendship and aide, there are the names of the characters in Support the Girls, which, especially spelled out, practically dare you to underestimate them: Danyelle, Krista, Shaina, and Maci, played by rising star Haley Lu Richardson with an overflowing bubbliness that’s at once easily parodied and deeply kind (and, at times, a little more inoffensive than it could be, for internal and external reasons Maci has a whole lifetime to untangle). To these much younger charges, Lisa is a den mother type who, as her own personal life falls apart, sets up an impromptu car wash for a waitress with sudden legal bills—more cinematic than a GoFundMe—much to the consternation of her boss, who parachutes in mid-shift to drive her off to the bank, in that way that bosses always have of mixing long stretches of more or less benign neglect with sudden manic episodes of reinvention.

That Lisa’s boss is played by James Le Gros, with socks under sandals and perhaps the most egregious Dip Lip ever committed to film, speaks to Bujalski’s broad comic instincts—this is a crowd-pleaser, in which a process-driven plot point, about the cable being out, metastasizes into a table dancing farce—with a spot of cross-dressing, rather against the grain at a sports bar where men have gathered to watch a pay-per-view boxing match. There’s plenty of under-the-table subversiveness to this good-natured, accessible film—the opening credits are scored to a country song called “Cowboy Up,” over seemingly endless images of the highway sprawl, gridlock, and concrete overpasses we won the West so we could build. Double Whammies is America: deep-fried food, sports on TV, ambient objectification, backslapping mediocrity, a personal touch instead of a safety net, and all of it more tenuous than it knows (at least at the beginning of the day). Of course Jennelle (Dylan Gelula), the Double Whammies trainee who considers herself management material, is the one most willing to climb the corporate ladder not by supporting the girls, but by setting them loose, as it were, in the free market. When Maci tells Lisa, “It makes such a difference when your boss really cares about you,” it’s the sweetest lie I’ve heard at the movies this year.