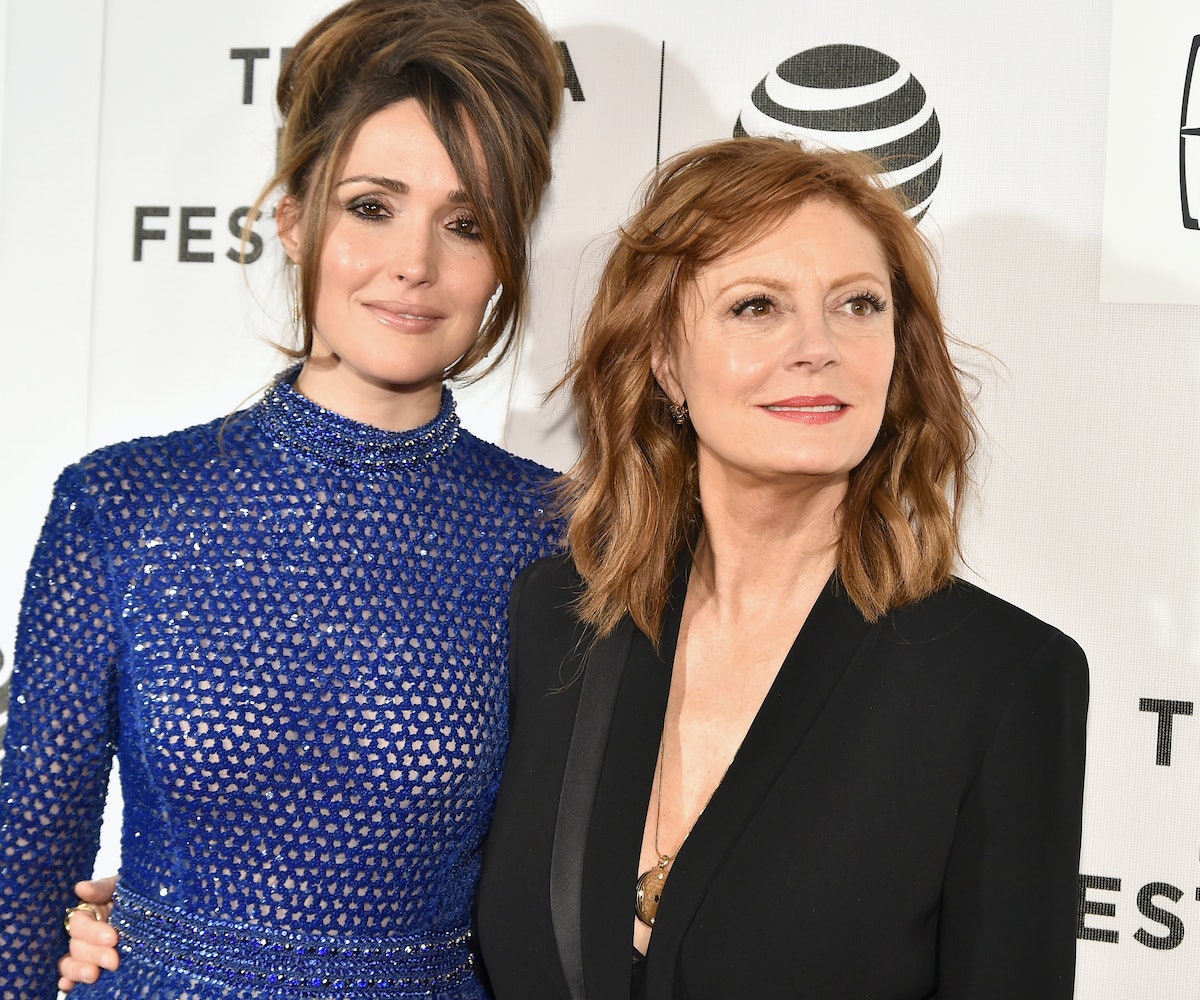 Susan Sarandon and Rose Byrne were in New York last week promoting their new film The Meddler, in which Sarandon plays an overbearing mother who moves to L.A. to be closer to her screenwriter daughter, played by Byrne. Written and directed by Lorene Scafaria, who based major elements of the script on her own relationship wth her mother, The Meddler marks Sarandon's best role in years. But with Bernie Sanders in town for the primaries, it was impossible not to begin our conversation with some politics, a topic the notoriously outspoken Sarandon never shies away from. Here, a conversation with Sarandon and Byrne about what it means to be a mother, women in Hollywood, and feeling the Bern.

It’s an exciting week to be in New York with the primaries here.

Susan Sarandon: This is a particularly interesting election cycle. They’re not all this exciting.

Rose, are you invested in American politics?

RB: As a foreigner, it’s just so different from Australian politics, in terms of the theatrics, and the money behind it.

SS: Well, this would have been an ordinary shoo-in, and usually New York doesn’t even matter, but it’s just because Bernie’s in this, it’s made it into this thing. And then of course, Trump, which everyone thought was so funny. It’s not so funny anymore.

Susan, are you excited to be here while Bernie’s in town?

SS: I was so upset that I wasn’t here for the Washington Square. I’ve been with him all over the place, but I was working in L.A.

SS: When I was in Iowa, nobody was covering it like here, and people have had a chance to know what he’s about now. There was no established media anywhere with him for the longest time. But, it was still pretty amazing to see, in these other states, on Native American reservations, and in Maine and Massachusetts.

As much as I would love to talk politics, we should really talk about this movie. Susan, how much of your character was based on Lorene’s mom?

SS: All of it! I was wearing her clothes, I knew the whole history. But you seep, you seep into that. And then I think the way Lorene explained it, is it started out with her mom and I even saw a five-minute sizzle reel with her mom doing exactly my part, with the accent and everything. And then you throw me in there and somehow it becomes an amalgam of the two of us. A lot of it depends on the other people that are in the scenes. And it was really important to have people around that were going play it straight and real and grounded, and not wink at the audience or be caricatures. I didn’t know exactly what she was but I knew what she wasn’t, and I didn’t want to go to extremes. I worried about her being a little extreme, and I didn’t see anything until well after the film was over, and I thought she was pretty annoying when I saw her.

RB: But she’s not annoying at all. Like, it’s a film called The Meddler. It has these connotations and then Susan just brings such delight and humor and gentleness and spontaneity, and she’s not like that at all. And how challenging is that, to play a character that’s already sort of been archetyped in this way.

Does that archetype apply to your own mother?

RB: No, my mom, she’s not overbearing. I’m the youngest of four. And when she does get involved, I really pay attention. If she decides to say something, it’s like a big deal. But I’ve had other relationships in my life where people are really overbearing and too involved. It’s intense, it’s definitely intense and I can be more passive, I suppose. You’ve got to be careful with those dynamics.

SS: Well, it’s confusing when it comes from a place of love.

You have to try understand where your mother’s coming from.

SS: But your mother’s been with you for such a long time. I mean, that’s why you can always think someone else’s mother is adorable when she’s eccentric, but your mother’s a pain.

Everybody thinks your mom is cool, except you.

SS: And it’s accumulative, so all those things that maybe are cute for a few hours, for years are maybe not so cute. I always tell my kids, if we’re going into a situation, like a family situation, that is potentially violent or whatever, I have a lot of brothers and sisters, I always say "Well, let’s just look at it like we’re in a sitcom. Let's try to find the humor in this. I know that’s going to happen and this is going to happen." And you can do that, for a certain amount of hours. There’s a window where you can maintain that objectivity, or if you have a joint, or a drink. But it does become more difficult as time goes on. I think you can stay objective.

RB: It’s limited, like a window, of being able to get in and out and keep a sense of humor about it.

Was this your first introduction to Lorene’s work and her writing?

RB: I had seen the film with Steve Carell and Keira [Knightley]. My brain’s fried because I haven’t eaten in a while so I can’t remember much.

SS: Something about the end of the world?

RB: Seeking a Friend for the End of the World! Which I really enjoyed. Yeah, it was really fun. It was surreal to play her, in a way.

Was there a lot of pressure having her on set every day?

RB: There was a responsibility, but I mainly really enjoyed it because I could ask her anything and she was candid so it was kind of wonderful. I love the relationship with her and Marni was really funny. There’s a lot of humor in there, which we were trying to, I think, tap into.

SS: I love the fact that it’s really funny and then something happens that takes you by surprise that might be emotional. Because that’s the way life is, and those are the hardest movies to make, really. To find that balance. And also, comedy is so much more difficult. If you have a whodunnit, or something very dramatic, and it’s kind of mediocre, you can still get by. But when you have a comedy that doesn’t work, it’s painful. We were so lucky to have so many women that were stand-up comics or funny gals who could play it completely, and added so much. I think it was harder for Lorene to let go of actually the way things came down and go with what was happening in the moment. But in trying to make it specific, she had so many stories and there were so many things which is always the actors job to make it specific so it becomes universal.

I was thrilled to see Cecily Strong in this.

SS: And how emotional is she, right? She does this whole thing. She was in the middle of doing the Washington correspondents thing, so she had to leave and then come back, you know, to fit us in. She could’ve gotten by without investing so much in those scenes, emotionally, and she did. What a joy it was to have that happening and have them be so safe and so confident.

Were you guys encouraged by the fact that this is a film starring two women while men are kind of secondary?

SS: I was happy that there were men that would do it because, for instance, when I produced Stepmom, when we were trying to cast the guy in that, you’d be surprised by who won’t even look at it. There’s some guys who don’t care.

There’s more of a dialogue happening in terms of gender equality in Hollywood. Do you see that as progress?

SS: I don’t think that’s something that you can dictate. I mean, Ed Harris is just a very great guy. The people that would do that are not going to be affected by the dialogue now. It has to do with somebody interested in the work, as opposed to the power of being in the lead. I think there are some guys, like Tom Cruise who’s done smaller parts, but I don’t know if he’d do a role where the two women have leads. I think it’s an ego thing.

SS: But you have, Rose was mentioning before, Paul Feig.

RB: Yeah! People like Paul. They’re championing women. And Susan was also saying, whether it’s a female director like Lorene, or Paul Feig, whoever it is, man or woman, forget about the gender. It’s just people who have a bit of champion in them.

SS: Certainly to have more stories told, and I think that when Reese Witherspoon has been developing projects, when you have a lot more women who are in the position where they can develop properties for women, that’s how it will happen. I don’t think it’s going to come from the studio system, really, honestly. Do you?

SS: The Melissa McCarthys, the Amy Poehlers, the Tina Feys that can get these projects up and can write good roles for women. That’s really fun. And I think there’s so many stories that, when you pick up the newspaper, it’s not white heterosexual guys of a certain age that are in all the stories, you know, and so why not tell? And if it’s a good movie, I think everybody’s interested.