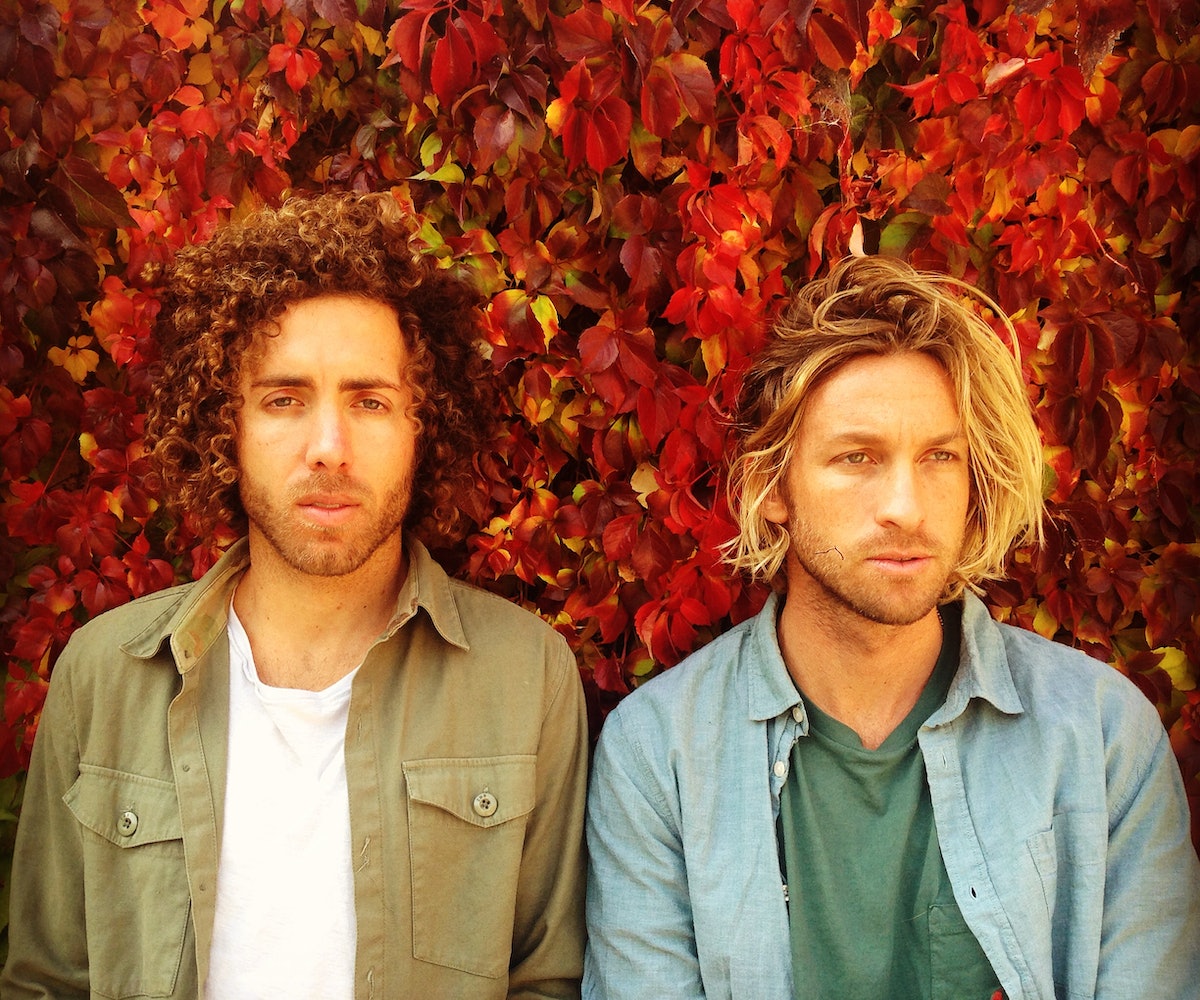 Los Angeles-based duo SWIMM has mastered the art of creating music that feels completely unrestricted. Inspired by the sun, surf culture, and their artistic friends (that they happen to share an incredible loft with), members Chris Hess and Adam Winn have created an infectious space for indie pop fans to completely let loose.

Fresh off a national tour with Dr. Dog, Bright Light Social Hour, and Young Empires, SWIMM maintains their momentum as they set their eyes towards the release of their first studio album. "We've been working pretty much nonstop, recording, writing, and mixing, and just trying to decide on what that album's going to be, and try to pick songs and all that." Hess says, "I think we were almost going to release a song before The Echo [show] but that didn't end up happening, so, I think it's going to be really soon that we're going to release new songs."

The psych-pop duo's bright, tropical beats and wanderlust melodies have fans buzzing everywhere online. The band's Beverly Hells EP was released last October under 24West Records with the lead single "All the Time" weighing in over 65,000 plays on SoundCloud.

Read our interview with SWIMM while you stream their EP, below.

How did you both get started in music?

I moved out of my parents' house when I was 18, and moved in with a guy that played music. Just a little bit after moving in with him, we got a drum set and started jamming together. That was kinda how I first started. I didn’t start playing with Chris until probably three or four years later.

I grew up surfing at a beach a bike ride away from my house. Basically, there was a group of older people that surfed there as well, and they were all really chill and sweet. They would always get together after surfing and have jams, so I just started going to them. I didn’t know how to play at all, but they would be really cool and let me try to play along and stuff. That was kind of how I got into it, and then when I finally started to show people, Adam was one of the only other kids from my town that was my age, that knew music that I liked, and also played drums. He was one of the five people that I would show songs to when I would record. Eventually, we started playing shows together.

In a previous interview, you mentioned that your moniker came from wanting your listeners to feel weightless. What artists make you feel that way?

: I would say Radiohead does that to me.

Yeah, I definitely think there are moments on the

album that really gave that. But, almost any band that’s mixed by Dave Fridmann also probably falls in that category. Like The Flaming Lips, Tame Impala, and even elements of the new D’Angelo and Kendrick Lamar albums have certain things about them that do that.

How has your sound evolved since you released your first EP?

: The first EP was the first songs that we were writing as SWIMM with the idea that we would be writing songs for a full band to play live. Adam and I played it together just as a two-piece for a couple of years in a different band. That was just the style of writing; everything was so much more confined. When we started writing, we decided we just wanted to play as a normal band and not a two-piece anymore and be confined to that. It was almost like a celebration in how normally you can write a song. At some points, I remember thinking, “Oh no, you don’t have to be super weird with writing a song because it’s two-piece and you have to make it interesting to put out.”

Now I can just write a song in a normal way, backed up with all the other elements. I think we were both still living in Florida so it was a little more sonically and melodically influenced, whereas when we moved to L.A., it was a really big wonderful smack in the face of culture, and seeing shit that we didn’t see before on a regular basis. It made me want to write a little bit more substance-based, and then try to fit the pieces of melody and other sonic elements to still make it sound like a SWIMM song around that, almost like a Tetris puzzle, instead of what used to be the other way around.

I feel like the new stuff is a lot more lyrically-based than the older stuff. The newer stuff that we’ve been doing and working on for the album is even more so.

Has the transition from living in Florida to The Cube in L.A. influenced the way you create music? Has your writing and creating process changed?

Yeah, totally. It’s impossible not to be working on something living here. You’ll feel like shit. You have to be doing stuff or else you’re just going to feel bad, honestly. Beause you’re going to feel lazy and everybody is kind of killing it, working hard, and doing really cool stuff. So, its been amazing for us, because it makes us work harder.

Yeah, and I think it’s so much freedom, too. Living in a warehouse that's kind of in an industrial zone. We really can do anything we want. We can be out at the bar with friends and be like, "Hey you wanna just go home and play music?" at 2am. To be afforded that luxury is really pretty amazing.

We’ll have parties where weird, crazy shit happens and it’s just nice. One of the first parties we had at The Cube was completely based around songs that we have just been practicing that are new, that we’re gonna try to get on the new album. The next day I remember just being in the driveway looking at all the cigarette butts and beer cans everywhere, and I was thinking, "Wow, this is so weird." You know? Like, this is so crazy—just awestruck at the actual ability to like be living in that sort of way.

The covers for both of your EPs are visually appealing. How did you come up with the art concepts?

I think the first one, our friend was doing this art on mannequins where he would melt crayons on them, and then, he did it for this nude art show. So, it was basically these nude mannequins, and he would melt art all over them and we just really loved it. So we got him to do one for us and then we kind of just messed with it and Photoshopped it to make it look the way it does. The second one... Chris can explain that one a little more because it was more of his idea.

Yeah, I wanted it to definitely reflect some of the unknown, underlying themes of

, which were wrestling with the whole beast of Hollywood, and how that plays a role in everyone’s mind who lives in L.A. We live across town from West Hollywood and all the silly glitzy parts of it. But you’re still involved in it enough to where it’s this weird, driving force that you loathe but also are kind of driven by.

We also like that fake sort of sense of self-gratification, that validation of getting awarded with something. That was kind of what the flowers represented. If you had to draw it to an exact lyric, it’d be that line in “Beverly Hells” where it’s like, “Aren’t you happy? Can’t you see? How well things are going for me?” But it’s obviously said satirically so it’s kind of like that, “Yay. You’re in a band. Good for you.”

What are some interesting things that your fans may not know about you?

Go ahead, Adam. Tell me, what do I not know about you? What’s in your recently cleared browser history?

I mean, I would say that not all the fans know that [Chris] wears crop tops around the house.

Sometimes when you’re tired and you don’t want to practice, and I have to get myself in the mode when it’s go time, I just dress up and I have a kitty bracelet and it’s fun to wear around the house and it’s just… you know? It’s a good look.

We also shared a bed for about a year. Like a tiny bed.