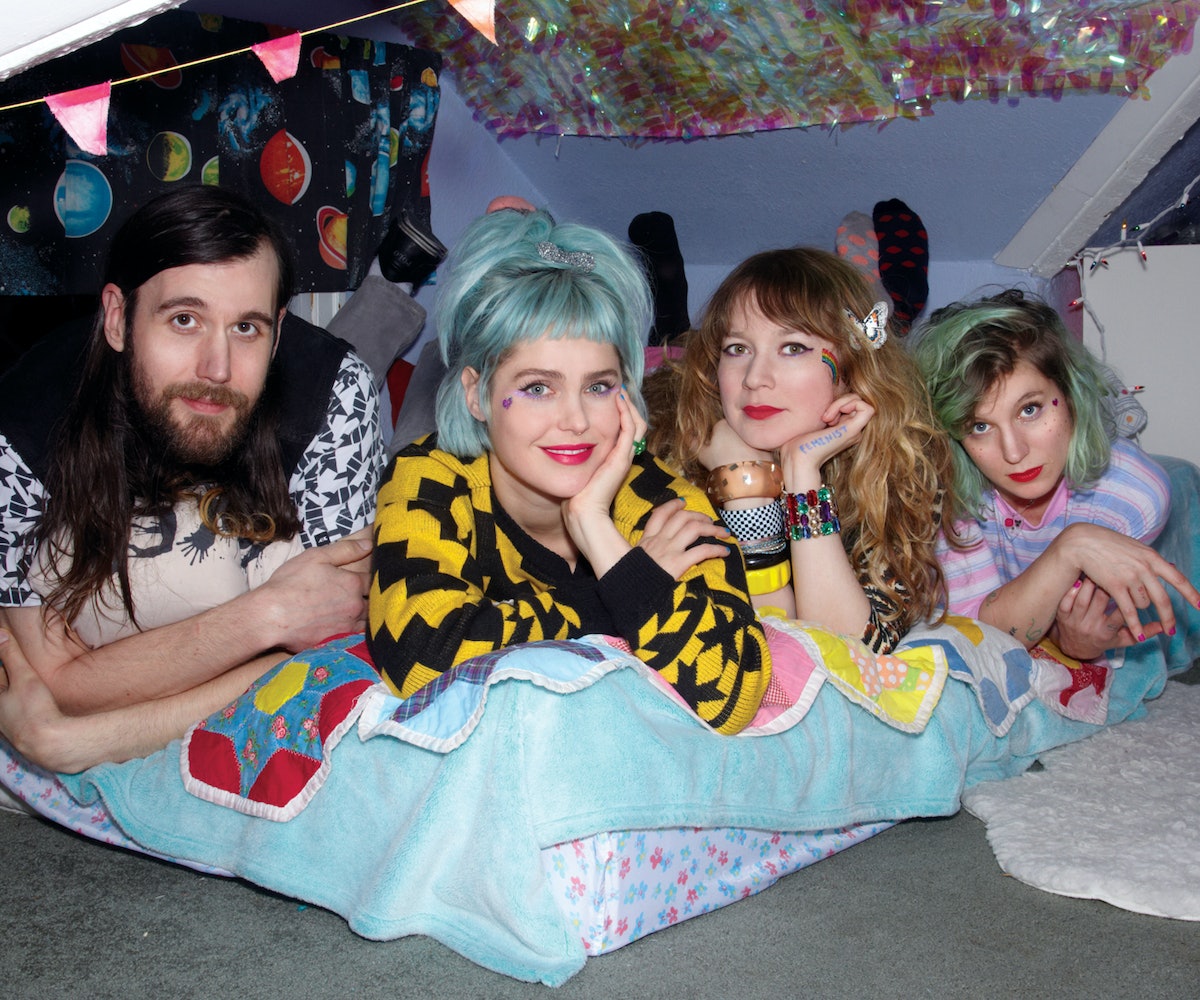 Seattle band Tacocat reaches into the hypothetical morass of half-formed tweets on feminism, pop culture, love, and the general mundanities of life, and molds them into candy-colored pop songs that hit you right in the gut.

“Talk,” off Tacocat's newest record, Lost Time, is one of those songs, the video for which we are premiering right here. Among a sea of sparkling pony tunes (“Horse Grrls”) and sarcastic-sweet breakup anthems (“You Can’t Fire Me, I Quit”), “Talk” is a darker song—at least sonically. “I would definitely say if everything’s at a hot pink to a medium teal, that the song is probably like a dark purple—with glitter in it,” says lead singer Emily Nokes. That color palate definitely makes an appearance in the Marcy Stone-Francois-directed video, which is replete with black lights, glow-in-the-dark stars, and Lite-Brite (Lite-Brite!) stop-motion animation.

Despite the moodiness of the video, which shows the band members only in sections as they robotically dance, sing, clap, and chat on the phone, Nokes says the song itself isn’t all that dark.

“I would definitely say that it’s one of the most different songs that we’ve ever made,” she tells us. “The winter in Seattle can be really awful, but I was thinking about one of my favorite things to do at the time: just hanging out with people and talking all night long. I live in an apartment building where a lot of our friends live, and I’ve had really great experiences where everybody is just talking and talking and talking to each other and not on their phones.”

It’s easy to think of the song as anti-technology (sample lyric: “Together, together, alone/ Stay true, true to your phone”), but Nokes denies that it’s as heavy as that. “A lot of the time, you’re just talking to people on Facebook and that’s how you’re sort of relating to the world, which is great. I love Facebook too, but I was just having these times we’re I’d be like, 'Let’s just put on some songs and dance around in the living room.' It’s just definitely [about] that little glimpse of human interaction, which is really special to me.”