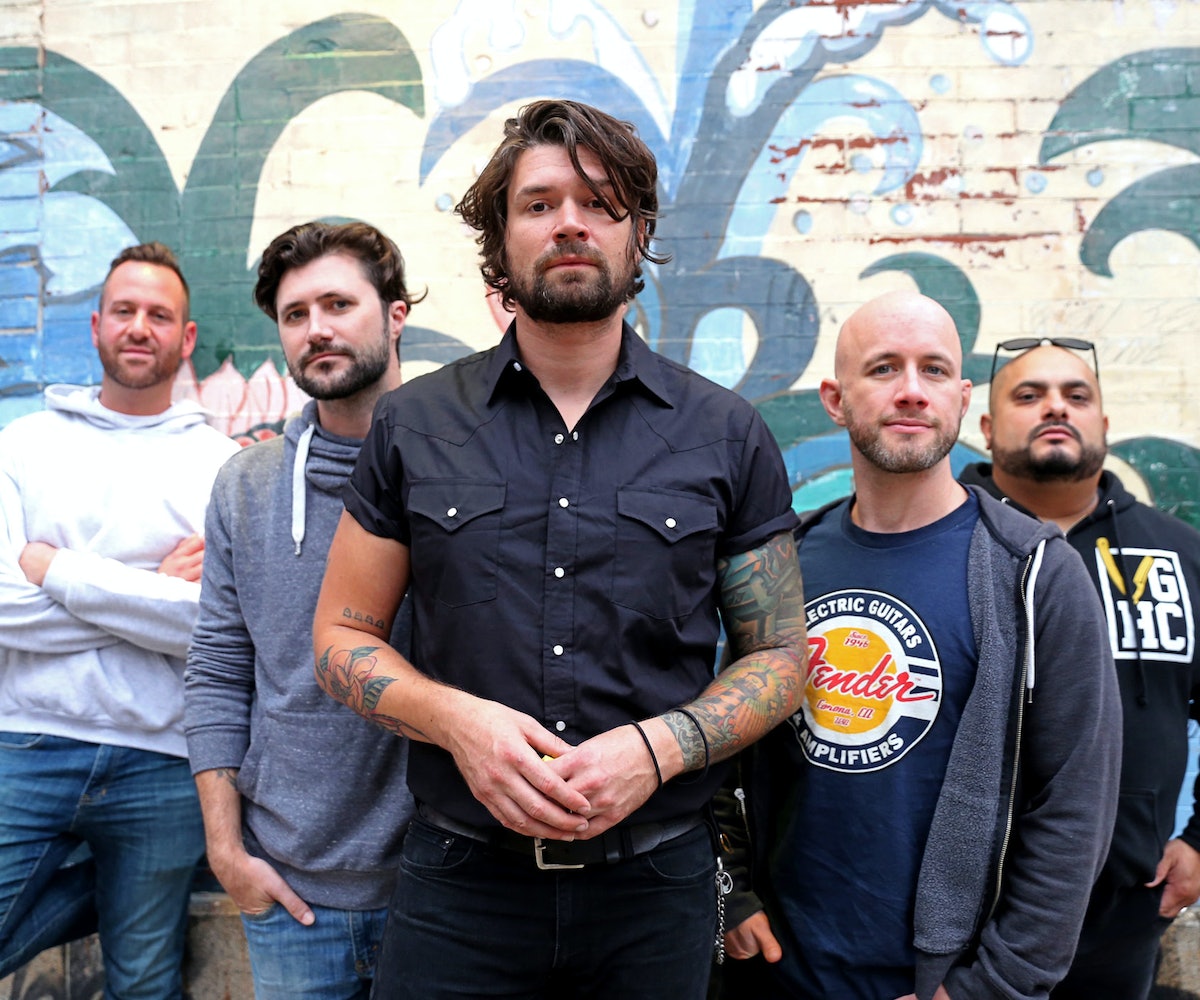 All photographs by Gab Bonghi.

The first time Caitlin Beahr met Taking Back Sunday, she needed a shot to calm her nerves. Now, standing in the lobby of the Trocadero Theatre in Philadelphia, she seems perfectly composed, retrieving a copy of their debut album Tell All Your Friends from a tote at her side. She emits a few nervous giggles as Adam Lazzara, John Nolan, Eddie Reyes, Shaun Cooper, and Mark O'Connell—the original lineup that formed in the early 2000s—shake her hand. Lazzara remembers her as she and other meet-and-greet winners pose for pictures.

It’s a quick process—no more than five minutes—and Taking Back Sunday bids the small group farewell. Outside the venue, Beahr catches her breath. She’s okay, “for the most part.” But even after spending the last 15 years listening to the group who’ve spawned hits like “Cute Without The ‘E’” and “MakeDamnSure,” she still gets emotional.

“I think it’s the feeling it creates,” Beahr says of meeting and seeing the band perform. “Knowing they’ve gone through some of the same stuff I’ve gone through. Everyone goes through that bad breakup. There’s something you can connect with.”

And over the course of seven albums, including last month’s Tidal Wave, Taking Back Sunday has offered music that helped define a movement. The fast-paced guitars, the call-and-response vocals, the song structures that allow for dramatic ebbs and flows of delicate to thundering drumming, the lyrics that display how high the stakes really were: “I thought of you and my worst brings out the best in you,” Lazzara sings in “A Decade Under The Influence,” a cut from 2004’s pivotal Where You Want to Be. It’s music that connects the listener to their feelings—of heartbreak, of anticipation, of disdain, of disappointment. And, currently, of nostalgia.

This kind of music is frequently categorized as emo.

“Almost any article I read about us, especially these days, they end up talking about that a lot more than any of us are comfortable with,” Adam Lazzara says. A light sprinkle of rain coats the city as he and his bandmates meander toward a Chinatown knick-knack shop. “For us to talk about that now, it’s like going through an old journal or high school yearbook.”

Because the truth of the matter is, Lazzara isn’t, nor are any of his bandmates, a teenager anymore. Tidal Wave is a perfectly frank and honest album that deals with the trials of homesickness as an adult and the changes that come with maturity. The songs that comprise their 2002 debut were written in basements and practice spaces on Long Island, New York, when the five-piece members were 17 and 18 years old. The people and emotions behind lyrics like “Why can't I feel anything from anyone other than you?” and “The truth is you could slit my throat and with my one last gasping breath I'd apologize for bleeding on your shirt” have faded into sepia-toned memories, yet are poignant enough to remain at the centerpiece of live performances.

“It’s funny because there have been people after shows that’ll come up to you and say, ‘Why don’t you do this anymore?’” Lazzara says. “And I’ll be like, ‘How old are you? What were you doing when you were 16, 17? Well, that’s how old I was when I wrote the first record.’ Then I’ll ask them, ‘Are you that same person?’ Then you see that light bulb go off. I’m very much not, and I’m proud of that because I’d be in a lot of trouble if I was still that same kid.”

Lazzara discusses this divide without malice. It’s something that comes with the job. He’s levelheaded and surprisingly soft-spoken compared to his goliath stage presence. In the shop where we speak, a pair of foam nunchucks catches his eye, though his toy of choice would be a kid’s robot. Guitarists John Nolan and Eddie Reyes try on masks.

“It might be a little too Slipknot,” Nolan says as bassist Shaun Cooper snaps a picture.

The group’s chemistry runs deep. While Taking Back Sunday has featured lineup changes, this core five are the ones who released Tell All Your Friends and thus reformed in 2010 for their self-titled album in 2011, Happiness Is in 2014, and now Tidal Wave. They’ve been through a lot together: the tours, the matching panther tattoos, the concurrent growth as musicians and humans.

“I think the five of us have a certain energy and we were really able to tap into it,” Cooper says. “This, being the first time any lineup of this band has had three records together.”

And Tidal Wave is their best one yet. While rock ‘n’ roll in 2016 is consistently redefined, Taking Back Sunday brings it back to its basic elements with thundering drums, growling guitars, and intensity that almost bursts the seams of sonic listening spaces. Album opener, “Death Wolf,” explodes with the enthusiastically ominous warning in lyrics like “With our head in the clouds and our feet on the floor/ Had a little bit and now we want some more.” Later on the record, “Homecoming” details the sentimentality in putting down roots over an Americana-style rhythm section, piano, and acoustic guitar. Besides crafting an expansive collection that transcends and complements their past hits, Taking Back Sunday has written an album that incites the same emotional candor as their prior repertoire. When Lazzara sings “The devil's in the details/ And we don't go in there/ Make it sound so simple/ Make it sound so cheap/ You make it seem so easy, lying through your teeth,” on “We Don’t Go In There,” it could be a line from their earliest releases.

On their current tour, they’re playing the album in full. It seems like a heady effort to bring songs that are only a few weeks old—publically, that is—to audiences that have grown up putting Taking Back Sunday lyrics in their AIM and MySpace profiles. But they’re pulling it off. Lazzara steps away from the mic at the end of “Homecoming,” and the audience recites the song’s closing lines back to him. Following, his stage banter is less witty and rather overwhelmed. The date is September 28. The album hasn’t even been out for two weeks. It’s just a testament to fan dedication to both Taking Back Sunday and the alt-rock music released in the early 2000s; the music that soundtracked high school parties, drives with friends, breakups, and fights.

Nolan and Reyes stand at a counter in a Thai rolled ice cream shop watching as their evening snack is prepared on a cold stone right before their eyes. Drummer Mark O'Connell and Cooper check out a Facebook post showing the cover of Newsday on which their likenesses are printed.

“That’s my car,” O’Connell says with a smile. His glossy, red classic 1949 Ford sedan glimmers in the photograph.

This is the first cover he and Cooper have graced without the full band. It puts things in perspective a little bit, how far they’ve come.

“I remembered thinking [when we first started the band], I would be okay if I could play small clubs for the rest of my life, that would be fine,” he says. “I think that’s what I think about more: if I was 17-years-old and I knew I was going to be doing this at this age, I think I would’ve calmed down a lot more and been a lot more relaxed, knowing everything would be okay.”

Reyes gets his ice cream. It’s topped with fresh strawberries. Cooper declines the treat—he’s lactose intolerant. As Nolan waits for his cappuccino concoction to reach completion, a couple enters the store. As they order, the young man in the pair turns to Lazzara and shares that he is a fan, how seeing the band there is making him blush.

Almost fittingly, Fall Out Boy’s “Uma Thurman” plays over the shop’s speakers. Comparing the trajectories of the two bands—and the countless others—who emerged during the peak of emo would be for naught. The only similarities, really, were the genre they were lumped in though the boom, from a decade removed is still exciting to think about.

“There must have been something in the water,” Lazzara says. “We were really fortunate. I can’t explain it, and that’s probably a good thing because if I could, it means it could be calculated.”

To say that nostalgia is having a moment would be an understatement. Reunion and anniversary tours draw fans by the thousand, but Taking Back Sunday have never stopped. There’s nothing to remember or reminisce over, only years of music to celebrate.

“If we didn’t have, nightly, people responding to every generation of this band, maybe I would be more geared toward the nostalgia of the old stuff, but since we have such a good cross section of people responding to all the songs, it’s still new,” Cooper says. “We feel relevant more than we feel nostalgic.”