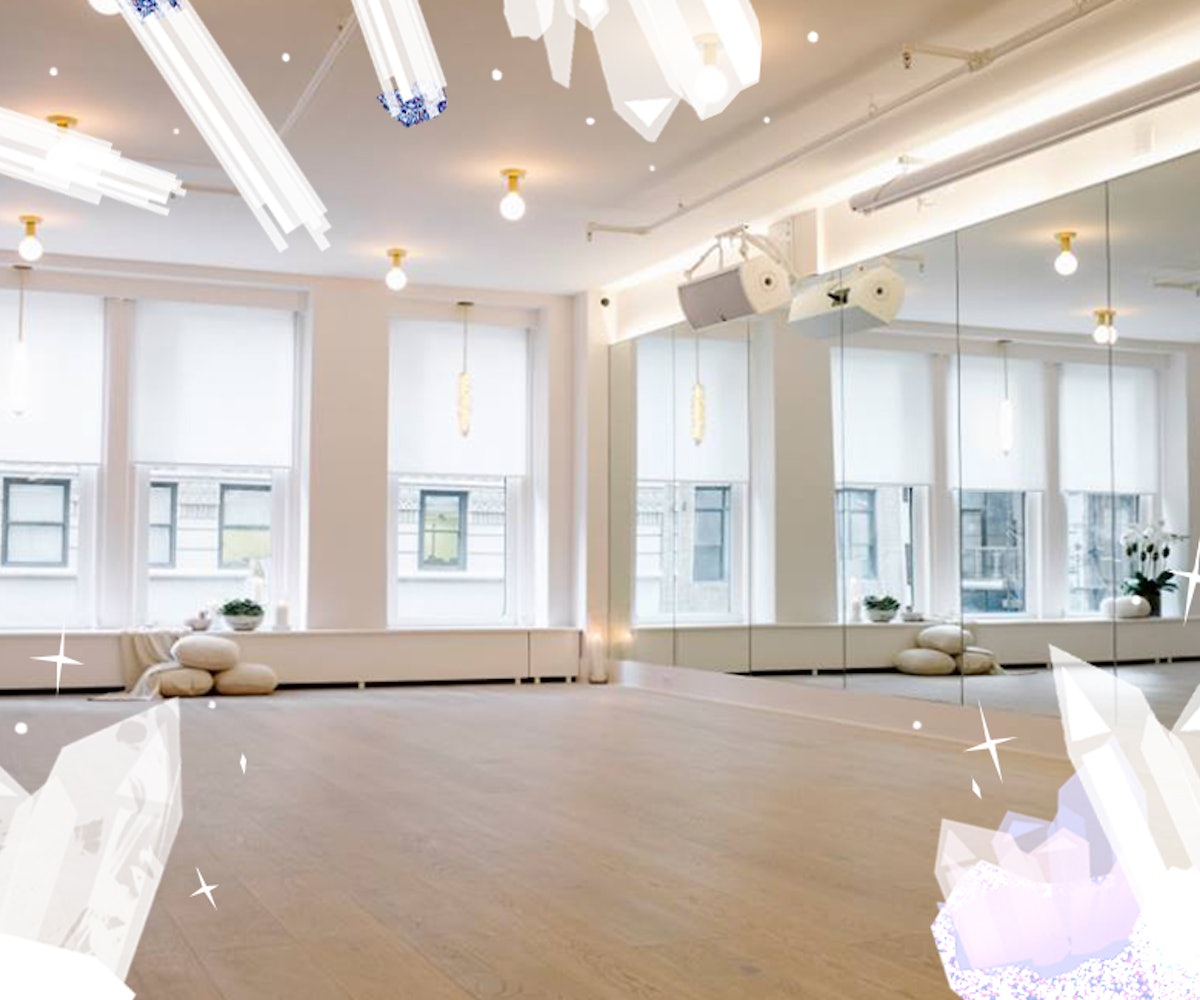 I didn’t do much research prior to attending Taryn Toomey’s cultishly adored but hard to encapsulate The Class. I first heard about it through a group of editors, who all nonchalantly declared, “Yeah, you’ll probably cry,” when they heard I was doing it. But also, they couldn’t, exactly, explain its concept in detail. I was in. No follow-up questions necessary.

Turns out, the veil of mystery is sort of part of The Class’ ethos. “We purposely don't over-explain the class so that everyone can have their own experience in it, as opposed to me telling you here's what's going to happen to you,” Jaycee Gossett, the director of training and development, tells me. It’s also just one of those things that you have to experience to really understand. But, in layman's terms, it’s an equal parts mind and body workout intended to test your limits physically (through repetitive movements) and emotionally (with motivational hippie sayings and lots of grunting). Or, in Gossett’s words:

It's very simple exercises in repetition to build intensity in the body, which is going to trigger your internal dialogue. Your internal dialogue is what you say to yourself throughout the day when things get intense, when you get triggered around something. So we're just using the physical body to help unlock stored emotions, stress, tension, and just to start to observe what you say to yourself.

I arrived late to my first class, which usually means I'd have had to forfeit my space and the $30 you spent reserving it. But here, it just meant that I was forced into the most uncomfortable spot a first-timer can be forced into, the front row.

The setup is intimate. Mats are placed very close together, almost on top of each other, and everyone faces a mirror. Lights are dimmed, an essential oil aroma lingers in the air, and the temperature is similar to how the subway platform feels on a summer day, i.e. hot. I believe the heat was intentional—cool air was turned on intermittently depending on the level of intensity—but it was also the first thing I took in when I walked into the class. That, combined with the mats, gave me the false impression that the experience was going to be similar to that of bikram yoga. Don’t make that mistake. Yoga, this is not.

The class starts off calm, with your hands placed over your heart and stomach, a move we go back to in between sets to catch our breath and, I assume, refocus. Then begins the actual workout. The moves themselves—squats, leg raises, jumping jacks, burpees (oh man, so many burpees)—aren’t all that innovative. They’re meant to be simple. The hard part comes into play when you realize that you’ll be repeating each move for the three-minute duration of whatever song is playing.

It’s easy until it’s not, and whatever body part you’re utilizing starts to burn from the isolated movements. This is the point in a workout where I usually stop. Any hint of fire in my muscles and I back off. It’s part of the reason why I'm afraid to get a trainer—I know they’ll hold me accountable for not pushing myself. And though Gossett wasn’t talking to me directly when she instructed everyone to let out a gust of HAH sounds once she knew the pain would start to sink in, it felt personal. And cathartic.

“This is where things get weird,” Gossett announced about halfway through the class. And they did. She instructed us to jump up and down for a bit and then invited everyone to let out a chorus of high-pitched screams while rapidly stomping. The wall-length mirror fogged up within seconds, leaving our reflections distorted.

I think this is the part when people usually cry. I didn’t, and I couldn’t tell if other people were, or if it was just sweat dripping down their faces I was seeing. I started to understand the appeal though—the screaming, the grunts, the interval workouts—even if the only thing I could think about in between the loud HAHs was how much extra rent they must have to pay to be able to get away with all this noise.

“As humans, we don't actually actively work to process our feelings or emotions,” Gossett tells me when I inquire about the whole yelling business. “They create all sorts of discord in the mind and in the body, so it's an opportunity to get a release, so you don't have to walk around with it living in your body or in your heart or in your head or in your relationship or in your life.”

Earlier, I mentioned this isn’t a yoga class. And it’s not, but it does have yogi elements. Like, you’ll be asked to get into downward dog or child’s pose from time to time. There’s also a savasana cool-down incorporated toward the end. It’s relaxing the way a yoga class is, but physically rewarding the way I imagine something like Barry’s Bootcamp is.

The Class isn’t for everyone though. There will be commandments like “open your chest to the sun” and “fight through the fire to get to peace” shouted at you. There are tourmaline and hematite crystals under the floors and around the studio to help cleanse student’s auras and help them stay grounded. If you’re wary of anything New Age-y, look elsewhere. It's also very white (I was the only black person in a class full of around 30 people). One glance at the website will probably tip you off to that. I was surrounded by Lululemon mats and Swell bottles. And, afterward, I racked my brain over which Big Little Lies characters would benefit the most from a once a week visit.

Even still, I’d recommend everyone try it out at least once. Did I get to the level of Zen the girl behind me who kept her eyes closed 90 percent of the time and who smiled to herself in between sets reached? Or the girl who stayed in the savasana pose long after the class was dismissed? Nah. I'm a Capricorn, it takes us awhile to warm up to things. But I did leave the class lighter, less annoyed that my subway train was delayed on the way home, and more focused. Maybe that had to do with my sudden urge to play Michael Kiwanuka’s “Cold Little Heart” on repeat, a song that could mellow out even the most hotheaded person in NYC, following the class. Maybe not.