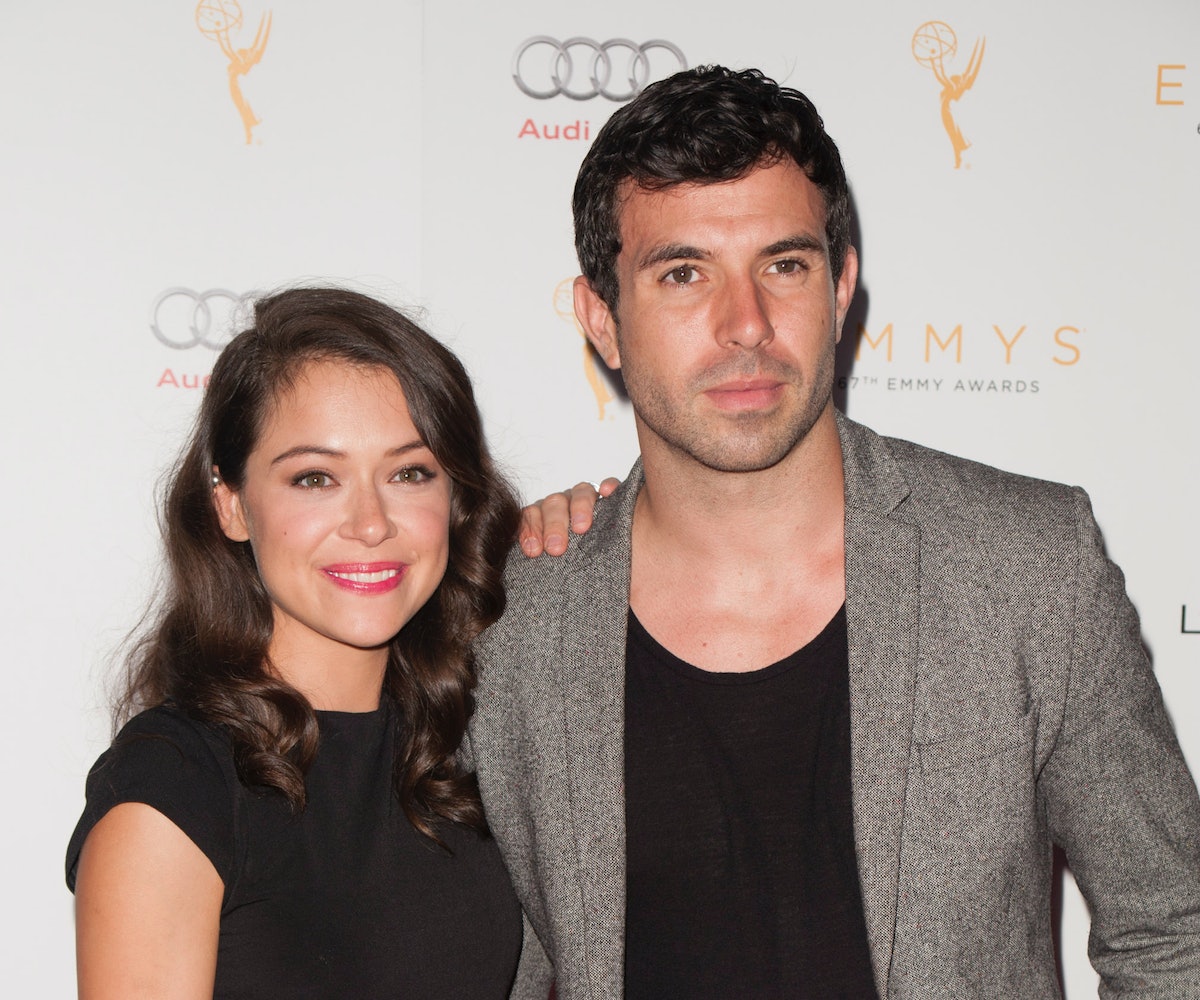 In The Other Half, a bracingly vérité romantic drama, real-life couple Tatiana Maslany and Tom Cullen star as two lost souls who find each other and must deal with the aftermath—for better and worse—of such an intense collision. Cullen's Nickie masks an all-consuming grief with a tough-guy exterior, while Maslany's Emily, an aspiring painter, suffers from bipolar disorder. How these two come together and try to build something lasting and real, is the movie's heartbeat. To make the film, with first-time director Joey Klein, both Cullen and Maslany took time in between their busy TV schedules (she as the star of Orphan Black, he as part of the Downton Abbey ensemble) to co-executive produce and help refine the film's script alongside Klein. And as two people who spend most of their relationship apart, they relished the time working together. We recently caught up with the couple at SXSW, where The Other Half premiered to great acclaim, to discuss their movie's complicated love story, falling in love IRL, and balancing a personal relationship with a working one.

This is a passion project for both of you. How long have you been involved with it?

Tatiana Maslany: For like five years and Joey, the director, has been writing it for ten. It was a long time coming, and a lot of different tryouts and versions of it.

Tom Cullen: I think as Joey's gotten to know us better as very good friends, he's changed the script, too.

How did you meet Joey?

TM: I met Joey working on a movie. We were both acting in it. We just got to talking on set one day about acting, and about work and art, and we really bonded. Then he offered me to read the script, to see what I thought about it, and he'd seen some of my work and he'd seen Tom's work. Tom and I had just started dating about that time.

Were you guys friends first or did you guys fall into it fast like your characters?

TC: It was pretty fast, wasn't it?

TM: Yeah. We were living in Budapest [Hungary] for like six months for our TV series, so we had a lot of time to just bond and see the city together.

TC: Yeah, it was a very romantic six months.

TM: We went to music festivals and went dancing.

You're saying the script changed after you guys came onboard. Can you tell me a little bit about that process of working with Joey and really informing the characters of the script?

TM: Anything we thought, anything we felt, anything we wanted to go deeper with or change or alter or explore differently, he was so up for it. He's the most legalist director I've ever worked with, in terms of allowing for shifts and giving over trust and control to other people and taking on new ideas. Yet he has a very specific vision.

TC: Yeah. I think the more that he got to know us, the more he wanted to push us as actors and to see what our extremities were.

In what way did he push you?

TC: He pushed it in the story. He created two really complex characters, quite dark characters, troubled characters, and also, there's this fire in both of them. I think in that way, he wanted to see every facet of human emotion, and I think that he really wanted to see us move through that. It was fun. We shot the film in 16 days, and it was a real fast ride where we just jumped in headfirst. It was a thrilling experience.

TM: I got to work opposite Tom, who inspires me and riles me up and knows me so well, so I feel safe. There was a lot of trust in play. I think you can overanalyze it too much, and these two characters were so burdened and so heavy, but I think we all have that in us, it's just acknowledging it. It's acknowledging that our emotional life is vast and it's always there at the surface. We all have really good poker faces, but we're all feeling a shitload of things and we're all scared, and we're all searching for love and acceptance and somebody to go [to]. "I see you and I love what I see." You know what I mean? I think it's an easy thing, but at the same time key. It's very universal.

Tom, tell me about Nicky’s look in the film. The '50s shirts—why don’t men dress like that more often?

TC: I wish I had the gall to dress like that!

You should do it.

TC: That's how I wanted to dress I think.

TM: You still have those shirts...

TC: I do, yeah. That was a really specific choice because he's lost his brother in such awful circumstances, where there's no reason why it's happened. There's nobody. There's no conviction. He's just gone, disappeared. I lost a friend this year. I remember the feeling of waking up the next day and getting into the tube in London and being so angry at everyone for not understanding that somebody had died. They didn't know how amazing that person was. For Nickie, he has paused and is stuck in that place. He has become completely disillusioned with the world. He sees it as this fake, unjust place, and he wants to reject it. He's dressing a certain way just to fuck [with] you. Don't come anywhere near me, don't look at me, don't talk to me, I'm different, I'm hard, and I will destroy you. Of course, underneath all that, he's just a little boy who needs saving and help. I looked a lot at '50s London—both anti-establishment, but renegade by generations, fighting against something. The rock and roll that's coming out of the second world war. Punk rockers in the U.K. rebelling against bachelorism and capitalism.

Is their relationship saving them, or is the relationship actually hurting them because they have not had the time to deal with their issues?

TM: I think that's exactly the kind of thing that we'd want people to question and wonder about. I like the idea that Emily and Nicky feel like a destined relationship and at the same time so dangerous. From the outside, they look like the worst enablers of each other, and yet at the same time the best.

TC: They're the only people who get each other.

TM: Yeah, they get each other, and yet they also push each others' buttons, but they can also defuse each other. There's something really volatile about the two of them.

TC: I think the reason they fall in love is because they recognize something in each other that satisfies something inside themselves. For Nicky, he meets somebody that gets him. He sees a level of pain, but understands and is patient with her, and she brings out something in him that he thought was missing.

Since you were working together while maintaining a relationship offscreen, did you make it a point to spend some time apart?

TC: I mean, we always have fun. We're best friends, it's very respectful, and I think we're very good at getting each other.

TM: We’re long-distance so we get a lot of alone time in there. Like when we don't have a lot of time, we freak out.

TM: We have lots of time apart, and we're both very independent people and working and doing our thing, and really support each other in that. At the same time, we really need time together and make sure that that's a priority, too, because I think in this industry specifically, it can become the only important thing.

Are you guys going to work together again?