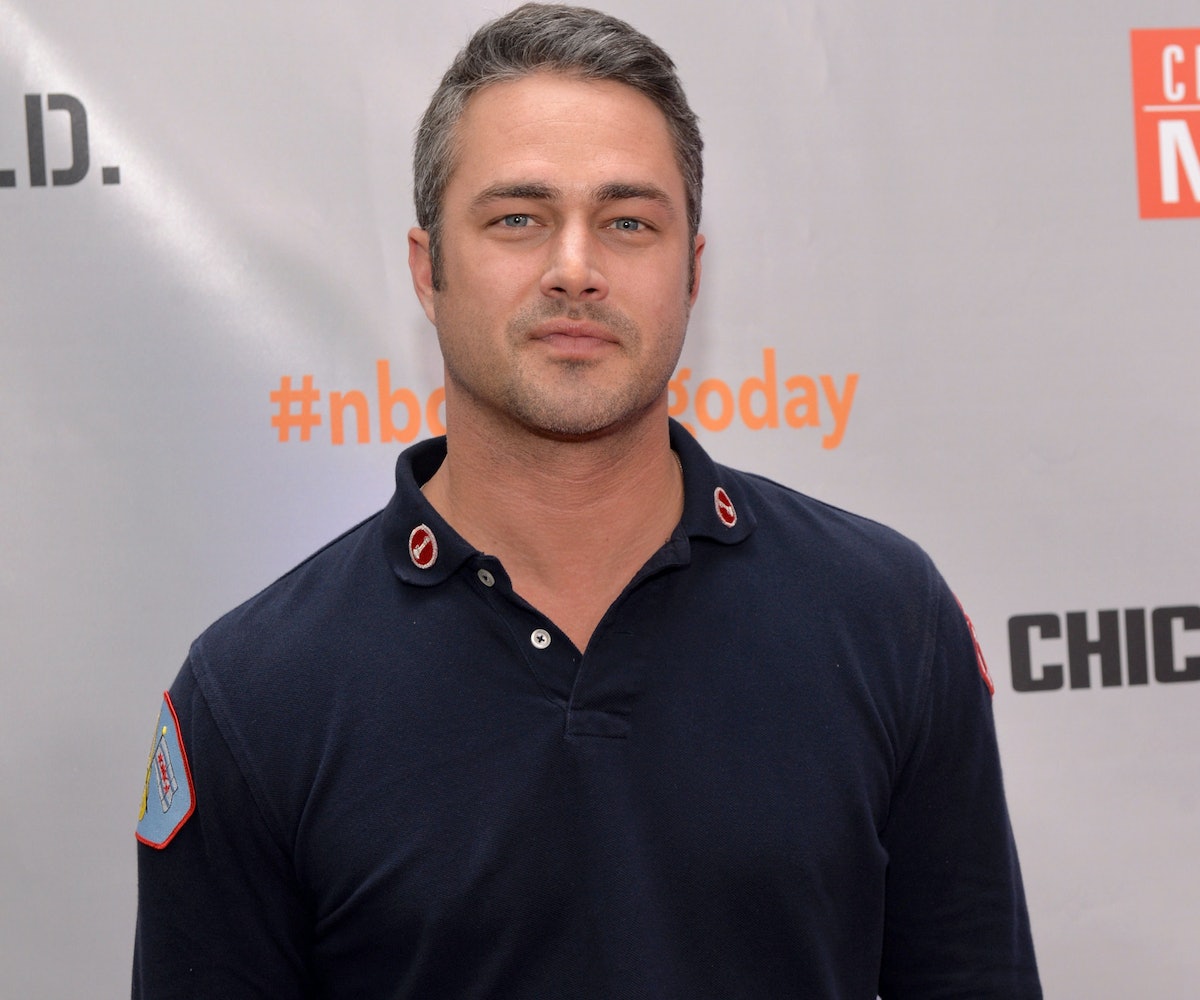 You probably know Taylor Kinney as one of the stars of Chicago Fire, or the fiancé of a certain pop star. But this weekend, the 34-year-old actor heads into the woods opposite Natalie Dormer as part of the psychological horror, The Forest. Kinney's character is a journalist who accompanies Dormer's Sara as she searches for her twin sister in the Aokigahara forest, a place at the base of Mount Fuji made notorious by the number of suicides that occur there. The film is a labyrinth of memories, hallucinations, and sheer terror. We sat down with Kinney to discuss making The Forest, superstitions, and the coolest place he's ever been.

I’ve gotten to do a lot, and pretty much all through work. I was in the Middle East, in Jordan, for Zero Dark Thirty, and we stayed in a place at sea. That was pretty amazing. I think it’s the lowest body of water on earth, so it’s incredibly dense with the salt content in there—you can go and put a 30 pound rock on your stomach and you’d still float. It was bizarre. I went there and I got to see the pyramids in Egypt. We flew into Cairo and into Jerusalem, so I got to see all of Jerusalem and the Wailing Wall. Parts of Asia, Europe—and it wasn’t until recently! I’m 34 and when I was 29 I got to see a lot of the world.

And The Forest was filmed in Serbia. What was that like?

I enjoyed it. I loved it. I didn’t know too much about Serbia prior, but we flew into Belgrade and we spent two-and-a-half to three weeks there. Beautiful city, great restaurants, great people, and we stayed in this little place called Tara. So in the film, that was Serbia for Japan. It was the coolest place. It was the middle of nowhere, about four hours outside of Belgrade on the Bosnian border. It’s just serene and really quiet and it felt good. I spend a lot of time in Chicago with Chicago Fire, so I’m in cities a lot and it felt really good to get out into the middle of nowhere.

I don’t know! I’m a bit of a country guy, so I don’t think it would stop me from going in, but certainly that place—Aokigahara forest—is real. And there are a lot of suicides there. I don’t know if they put out numbers, but I think in any given calendar year, it’s over one hundred, which is staggering.

Were you familiar with Aokigahara forest before this movie?

I wasn’t. I know there’s a great documentary, and I watched that after I read the script. It just adds this kind of ominous tone, even in that video, I think a nature guide sees someone in a tent, and he’s by himself. He says, ‘Well, we can’t kick him out,' but you’re not quite sure of his intentions. Is he going to stay and think things over, or is he there to commit suicide? I think that itself, when watching this film—knowing this place exists, that it’s real, that adds a layer of creepiness to this film.

And in this film, your character is very morally ambiguous. Was that a draw?

Yeah, definitely. I was with Jason Zada, our director, and we were talking about character arc, and we were talking about this character and where to go with it. I was giving him ideas about my take on things and what I thought would be interesting. He did the same, and we weren’t necessarily married to any one idea in terms of who he was, how I was going to play him, and how he was going to direct this character. That process was fun for me, to be there and be inspired by something just on that day, and to say, ‘Hey, what if we try this?’ The same can be said for Natalie [Dormer]. She was a great scene partner, great to work off of, very generous. You kind of paint with broad strokes and the edit room and Jason hone a performance into the story you see on the screen.

Before this, did you consider yourself a horror person? Were you into scary movies?

No, I’m not a big thrasher guy, like the new Saw movies and things like that. That doesn’t turn me on. I think the psychological aspect, like you watch it and it keeps you thinking. I think that turned me on more than it being a horror film.

Are you superstitious at all?

No. I don’t think so. But that being said, you wouldn’t catch me in Japan in the actual forest with a tent. I won’t press my luck. And I don’t go out of my way to walk underneath ladders or break mirrors, but for the most part I’m not superstitious.

A lot of the scariness of The Forest is also based in folklore—were there any scary stories or movies that stuck with you as a kid?

Sure, The Exorcist or Poltergeist. The fuzz on the television could freak me out. But I remember the first time I saw the original Texas Chainsaw Massacre, and it felt so real. That opening sequence and the van...that stayed with me. That creeps me out.

What do you think makes a great thriller or horror film?

Something that stays with you. You have a date or you go with some friends and you get in the car or walk home—you’re engaged, or you’re still talking about it. Or you go to bed and you have this need to watch cartoons to get your mind out of that headspace. I think that makes a good horror film—something that stays with you after you see it and stirs up a conversation afterward.

This is also a very active film—I felt tired just watching everything that was happening! What was filming like?

I loved it! I loved being in the woods and Serbia is a beautiful place. For me, it was more chasing. Natalie Dormer, her character was doing a lot of running away, so it was kind of cat and mouse. Not too many big stunts, but there was a lot of walking and a lot of ground covered.

You’ve done a lot of TV—what was it like taking on this film role?

It was very different from the character I play on Chicago Fire, and the medium is similar, but I think in film you get a little more time. Television is more of a writer’s medium and you have some guest directors, and so they direct a role to adapt to the show. In film, it’s more of a director’s medium, and you have a little more creative license. As an actor, you get a little more time to play and voice your opinion. Not with every film, but with Jason, if I had an idea, he was all ears. Those are the types of directors I like to work with.