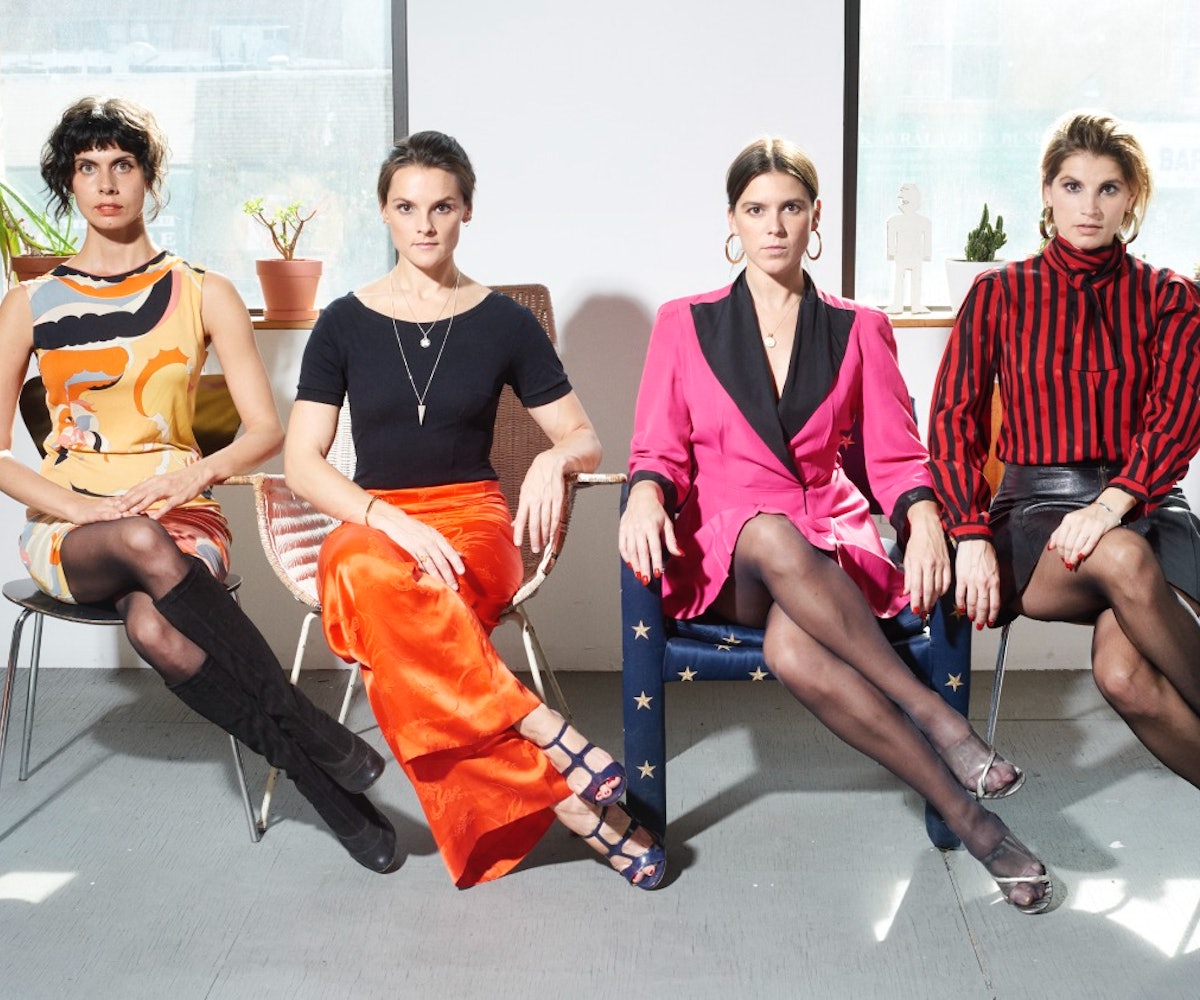 Three albums in, and TEEN’s penchant for reinvention shows no sign of slowing down. Leaving behind their debut’s knotty indie explorations and the fuzzy guitars of 2014 release The Way and Color, the Lieberson sisters and bassist Boshra AlSaadi are mining the weirder side of ‘60s and ‘70s pop for Love Yes, due February 19 and premiering right here. The instrumentation of lead single “Tokyo” is pure Zappa, while frontwoman Teeny’s vocal gymnastics on “All About Us” set her up as a glorious kook in the style of Russell Mael and Freddie Mercury. We caught up with Teeny to discuss the band’s glam direction, fighting for equal treatment in the industry, and the discreet charms of Snapchat.

With every album, it seems as if you completely reinvent your sound. Do you see yourselves as Bowie-like chameleons or is there a trajectory to the TEEN aesthetic?

With us it’s a little bit of both. Personally, as a writer, I can’t sit still. I always feel like I’m exploring new territory and wanting to constantly reshape myself, but I think also as a band we’ve just gotten better because we’ve been playing together for so long. That has naturally influenced the direction of the music as well.

Love Yes feels like an experiment in pop, especially compared to the R&B and indie rock sounds of your previous records. Did you find you were trying out new things musically?

“All About Us” seems to be a playful look at gender relations. What’s the story behind it?

I write a lot from the top of my head and then it becomes something. With that one, it was sort of about the dynamic of how women are often used to some sort of uphill battle and therefore are not afraid to take the more challenging course. A lot of men claim to do that and then they actually don’t. It’s also about this idea of not living up to some idea of masculinity.

You guys tweeted in support of Dirty Projectors’ Amber Coffman after she spoke out against sexism and sexual assault in the music industry. How do you feel the industry can become a safer place for women?

These past couple of years, everyone we’ve worked with has been incredibly supportive and we also work with a lot of women, so we haven’t felt a huge amount of sexism in our inner circle. But as a woman in the music industry, or probably any industry, it’s just a part of your life. We’re so used to it that it feels courageous to speak up about it because it’s so much part of our day-to-day dialogue that people don’t realize it’s happening. People also don’t want to admit it because they don’t want to change their behavior, but it’s there every day. Speaking up about it is important, but it’s equally important for men who see women treated in a particular way to speak up about it as well and call their friends out. It can’t just be up to women to fight the fight.

On this album, some songs discuss issues such as the death of your father. Do you and your sisters find it bold and risky to put out songs with such deeply personal content?

For me personally it’s a little scary, but that’s the risk you face as a musician, that it can become quite personal. You have to be okay with that intimacy and that there might be criticism of what you’re saying and how you feel—it’s just part of being in the public eye.

As a band mostly made up of sisters, do you ever find there are personal topics not all of you are comfortable with presenting to the world?

There’s only been a few instances where we’ve come up against that. We generally are very understanding of each other and we’re also so close that there doesn’t usually have to be a conversation. There was one instance on our last record when I said “bitch” in the chorus of a song, and that was something we decided as a band to talk about. I’m okay with swearing, but we wanted to make sure there was purpose to it, especially because it was specifically talking about a feminist topic. That’s really the only time we sat down and had a conversation, though.

You’re celebrating the album’s release on Valentine’s Day. Was that a playful dig at the holiday’s commercialized (and arguably anti-feminist) nature?

I just think that it’s a ridiculous holiday. I never or very rarely celebrate. It kinda feels like New Year’s Eve when you don’t really want to do anything so the best thing to do is work or play a show, and I think that’s how all of us see Valentine’s Day.

You recently featured on Pitchfork Radio, where the team taught you how to use Snapchat. Are you avid snappers now?

I don’t know. It was pretty funny using it that one time, but it’s the kind of thing I would probably download and get rid of a day later, mainly just because I’m already so overwhelmed by social media in general. I feel like I can’t keep up with it and I think my bandmates are pretty much the same. I don’t understand how people are constantly tweeting and constantly have so much stuff to say. I don’t have that much to say, and I’m already on my phone enough. Being on it more would destroy me.

The album’s dropping February 19, and you’ve teased a new video on Facebook. What’s up next for TEEN?

We’re going to tour a ton. That’s the main focus: we’re going to play this music live as much as possible, so we’re trying to get out on the road as much as we can. Also some collaborations and remixes are going to be happening. Our friend from A Sunny Day In Glasgow is going to be covering a song of ours, which we’re really excited about.