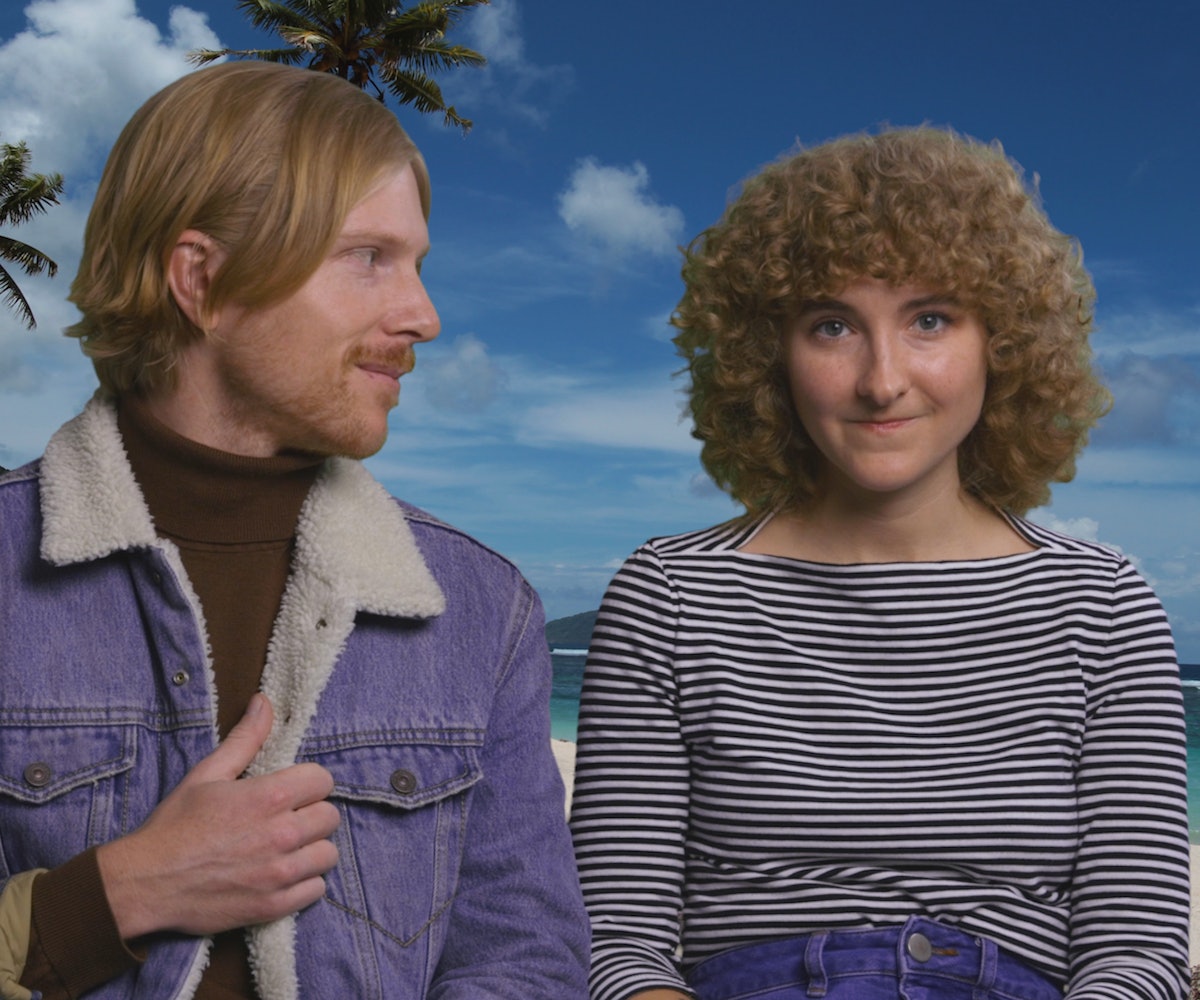 Six years ago, the band Tennis drifted into our lives and swept us away with their mellow, indie pop tunes dripping in nostalgia, sweet harmonies, and whimsical narratives. Sailing is the foundation of Alaina Moore and Patrick Riley's entire relationship—it's what the couple connected over when they were undergraduate students together. "[Sailing] was the first shared dream and goal that we ever had," says Moore.

After a long round of touring in promotion of Tennis' third album, the husband-wife duo went offshore on a six-month-long sailing trip to the Sea of Cortez. This journey marked their first time back at sea since they started "working on making Tennis something real and sustainable." Not only was it a productive period of time off, but it became the perfect setting for Moore to focus her attention on writing a fresh batch of material for their next album.

"I usually experience perpetual writer's block or fear and anxiety toward my writing, 'cause I'm afraid that either I'll write nothing or the worst thing I've ever heard and hate myself," says Moore. "I noticed weirdly that in the setting of being a captain on my ship in the middle of nowhere, the much realer concern of the safety for myself, Patrick, and our boat completely eclipsed my fear of writing a shitty song. It enabled me to write really easily—my inner critic was completely satiated and silenced in this environment because I had more pragmatic fears than being a bad songwriter."

After Moore and Riley returned to land, they produced their forthcoming full-length in the seclusion of a cabin located in Fraser, Colorado. For the first time, they both played, recorded, and did everything for the album themselves. Yours Conditionally marks a new milestone for the band, especially for Moore as she finally found comfort in her place as a songwriter.

"It was really amazing and a much more joyous experience because it was the most connected Patrick and I have ever felt. Normally we argue a lot in the studio—we definitely treat it as work and shelve our relationship normally," says Moore. "We disagree a lot, and we had made these [index] cards where they would be like tie breakers if we argued—we never had to use them once because we never had a conflict, which really surprised me, that we were just completely on the same page the whole experience."

Yours Conditionally is out now via Mutually Detrimental. (Girls star Zosia Mamet is featured in the infomercial for the record.) As you'll see in the video above, this duo can make it through any obstacles whether they be on land, sea, or air. Stream the whole album and learn more about Moore's musings in the interview, below.

I recently saw you perform with Michelle Branch. How did you get connected to her?

You were there on the best night of my life... So we've been friends with Patrick Carney ever since we worked on our second record [Young and Old] together. While we were on the sailing trip, he and Michelle got together, and he kept referring to his "new girlfriend Michelle," but I wasn't thinking Michelle Branch. Then one day he was like, "Oh, I produced Michelle's album," and he sends it and it's Michelle Branch. I was like, "What? Why did you not clarify this?" We were freaking out.

So I immediately tell him all of my fangirl stories from my childhood—I bought my first guitar when I was 14 with babysitting money, and the first thing I did was learn how to play "Everywhere" by Michelle Branch. [Carney] had that in mind when they booked this first show for her, and he called us and asked if we wanted to be her backing band. I spent the next week nervously learning the A-side of her record, and I thought I would be way more comfortable being in someone else's band 'cause I always get stage fright, but because it was my teenage hero, it was even more nerve-racking than if it was my own show.

Given that Yours Conditionally is your fourth album, how would you say that you have evolved as a songwriter?

I definitely hear ourselves gaining confidence and experience throughout each record. For myself, the biggest difference that I hear with this record, as opposed to previous ones, is that I'm finding my own voice, 'cause I have to write to myself. I grew up singing other people's music and emulating their voices, so it's always been challenging for me. I know what kind of a song Gwen Stefani or Jewel would sing, but I wouldn't know for myself. I felt like I didn't really have an identity, and I had to build it out of nothing. The only way to do that was to make albums over time, and then look back and see tendencies of ways that I sing and learning how to write in a way that suits my own range and the timbre of my voice. So that's been the biggest challenge for me, but I really enjoyed singing this record 'cause I feel like I'm finally learning how to write in a way that suits me.

The tracks that really stood out to me on this record are "My Emotions Are Blinding" and "Ladies Don't Play Guitar" because of how pro-feminist they are.

I'm so glad that you enjoy them. Yeah, those ones I had written the lyrics separately, and they just lived in my little journal for a long time before we had music put to it. I don't write like that all the time, but whenever I do, it ends up being my strongest lyrics because I formed them for the sake of myself to say something as opposed to crafting a melody and then trying to spit words in as a vehicle for the melody. Because I care most about melody and songwriting, that's usually what I do. Whenever the lyrics come first, I feel like they do the most work and I was able to say something so much more explicit and powerful that way.

I couldn't think of a better time with everything that's going on right now in our country for young women to hear those tracks and feel empowered and valued.

Now that feminism has become popular, which is so weird, I'm glad that I randomly have written these songs before I knew how important it would feel to me to talk about feminism. But it's a good time now that it's out there on everyone's mind to get into it more deeply and kind of unpack it. [Feminism] is more than a T-shirt and more than girl power. It's a lot more complex than I think it's being conveyed, and it's a perfect time to have more nuanced conversations about what the real work of feminism is.

What is the theme for this album?

As the songs started to come together one by one, I started to notice, thematically, something arising out of it, which was my consideration of myself in relation to the world as a woman. I was thinking a lot about the demands and expectations that are placed on me as a woman—which, of course, everyone has this, all genders and all humans—but specifically thinking about it from a woman's perspective. Thinking about the way that I was maybe unconsciously assuming sort of archetypal roles, especially on the side of Tennis. On a performative level, being beautiful, trying to please this faceless mass of people that I'll never know, and feeling like I was kind of shaping myself or being shaped—that, maybe, I didn't want.

Also, within my marriage, I think about it a lot. The question that I kept asking myself was, Where are the limits to my devotion as a wife to a husband, as an artist or a songwriter to an audience, and as a woman in the world? Where do I draw the line between my autonomy and then the way that I want to perform the role that I have for you? That's one thing that I noticed, I was kind of working through in every song on this record, which is why we called it Yours Conditionally; because I do want to be a part of it—I do want to give something. I do feel a commitment to an audience that listens to our music and to my husband and all of these relationships that I was considering, but I also have to assert some kind of boundary to keep myself from almost being erased in the context of my relationships.

So many female artists don't want to be asked about the experience of being a woman in the music industry because it feels like an inherently sexist question.

Yeah, I've read the same exact thing and I totally get that and it's true. Basically, by naming and continually bringing up the distinction, you almost give it more reality. You're reifying it even more and that's a valid point, but for me, I think, it's important to still discuss it because there is still a difference.

If you just stopped talking about it or bringing it up, it's not going to resolve the underlying assumptions or biases or things that we unintentionally do that frames the way that we treat or perceive people in the world, especially women. The same thing goes with LGBTQ and people of color. I understand that by bringing it up you're reaffirming the distinctions, but by not mentioning it, it's all still there. I feel like it's still worth bringing it up at this point.

It's important to keep that dialogue going.

The most simple, concrete example I can think of is [how] I've occasionally had some of my writing credits mistakenly attributed to Pat, but his writing credits have never been mistakenly attributed to me. Ever. Even when we first finished this record, we were playing it for some people and there was a guy in the room who meant this complimentarily, but he heard a bass line that he really liked and looked at Pat and he was like, "Dude, sick bass line." And I was like, "Thanks, I wrote it."

That was not meant to be an insult; it was just this assumption that Pat would have written it... It happens all the time. Pat writes so much, and he definitely engineers the record and takes more of a lead in a technical aspect, especially in the studio. It's a tiny little thing, but it's there and people only notice that they do it if somebody points it out to them.