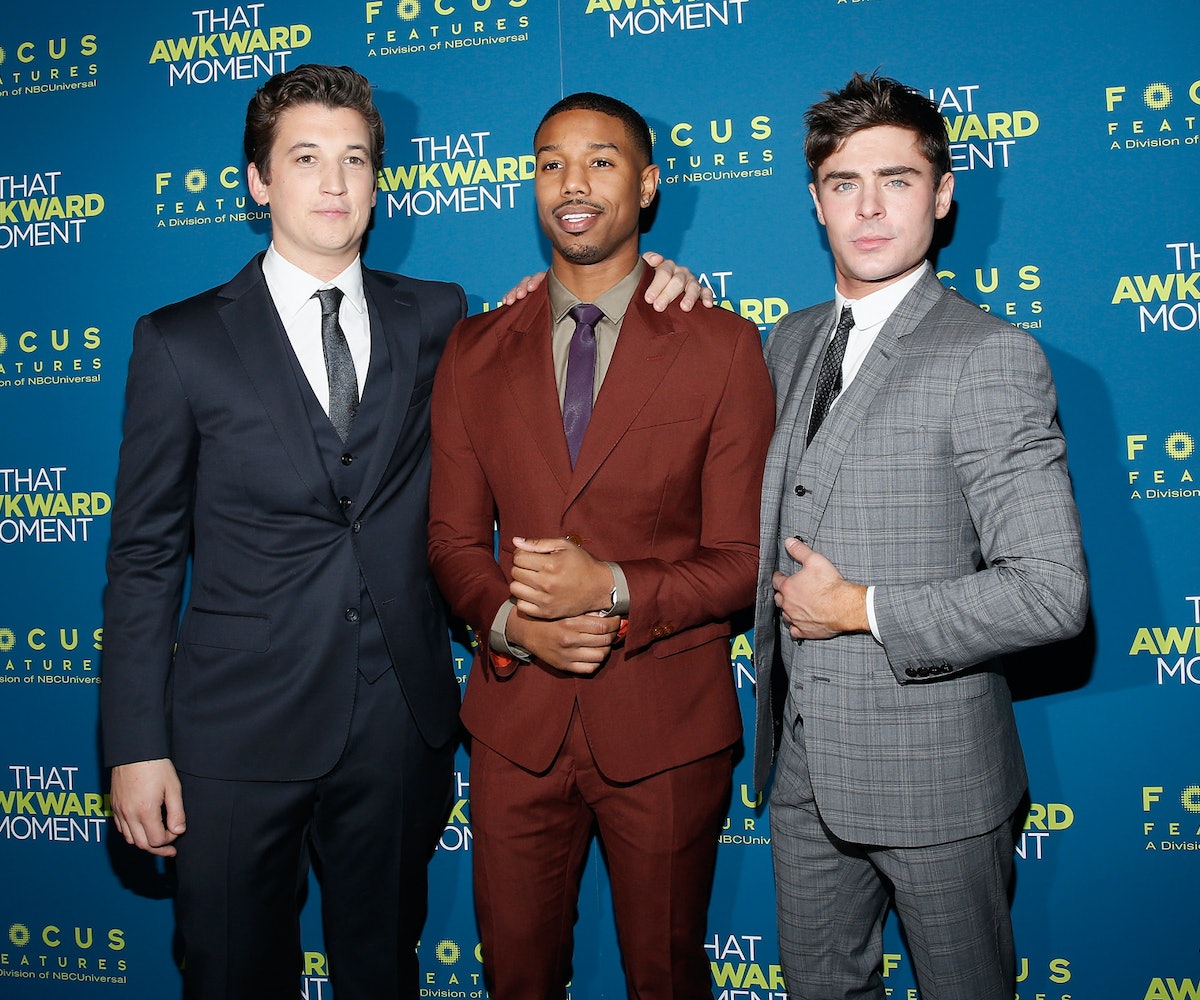 What do you get when you get Zac Efron, Michael B. Jordan, and Miles Teller together for some naked planking, PlayStation playing, and beer guzzling? You get That Awkward Moment, a new movie about three best friends desperately trying to stay single in New York.

The film mixes the sentimentality of classic '80s rom-coms with modern bad boy humor. During a screening I managed to both laugh so hard that my chair rocked forward into the person sitting in front of me (sorry!) and still be seriously invested in each character's plot line. Of course the guys who make the movie so great are the actors behind its three protagonists, Zac Efron, Miles Teller, and Michael B. Jordan. With comedic and dramatic backgrounds, the trio was practically made to star in a rom-com together. They seemed to love the experience too, especially the dance parties... just read on to get the scoop on That Awkward Moment from Efron, Jordan, and Teller themselves.

What made this movie stand out to you in the piles of scripts you read through?

Michael B. Jordan: There's was only one script! [laughs]

Zac Efron: It was well-written. Tom, albeit he was a first time director, he really wrote a great script and captured authenticity, which is something I really related to for our generation. It was a story about three best friends, and I always really wanted to make a film about that.

Miles Teller: Romantic comedy, I think, pleases everybody. It's funny while having a heart. A lot of the ones I've seen in the past few years haven't been as good as the ones they were making in the '80s, so I was happy to do this with two great guys.

Did you relate to your characters?

ZE: Shit, yeah. Do you think we played them well?

Yeah! I feel like I know your characters in real life.

MBJ: Yeah, we definitely related to them. I think we're each a mix of all of every [character]. I see a lot of Daniel in me, and Jason. I've had moments in my life where I've was very emotionally unavailable, scared of commitment. I've done the serious relationship thing, tried to make it work. I've been kind of carefree, always in wing man mode.

ZE: I think all three of us get what it means to be a young man in this time and period. It doesn't matter what part we played, we all get it.

MT: Growing up as a young woman, it was finally nice to play a guy. [laughs]

Well, it's obvious you put a lot of work into it.

MBJ: He did his best Jared Leto.

During shooting would you go out together and try out some of your characters' moves?

MBJ: We weren't going out method, in character. I wasn't sulking around. I think we're naturally wing men for one another. We spent a lot of time going out, shooting this film.

What was your favorite scene to shoot?

ZE: She just wants us to say naked planking.

MBJ: I remember when we shot B roll of us just dancing, having a good time.

ZE: Yes, yes, yes! There was a moment where they let the cameras roll--

MBJ: Put the music on blast--

ZE: And let us be ourselves.

MT: That was a lot of fun. I also liked the scenes of the three of us at a diner because that's so quintessential New York, meeting for breakfast, talking about the night before. Any scene we were all in together was fun.