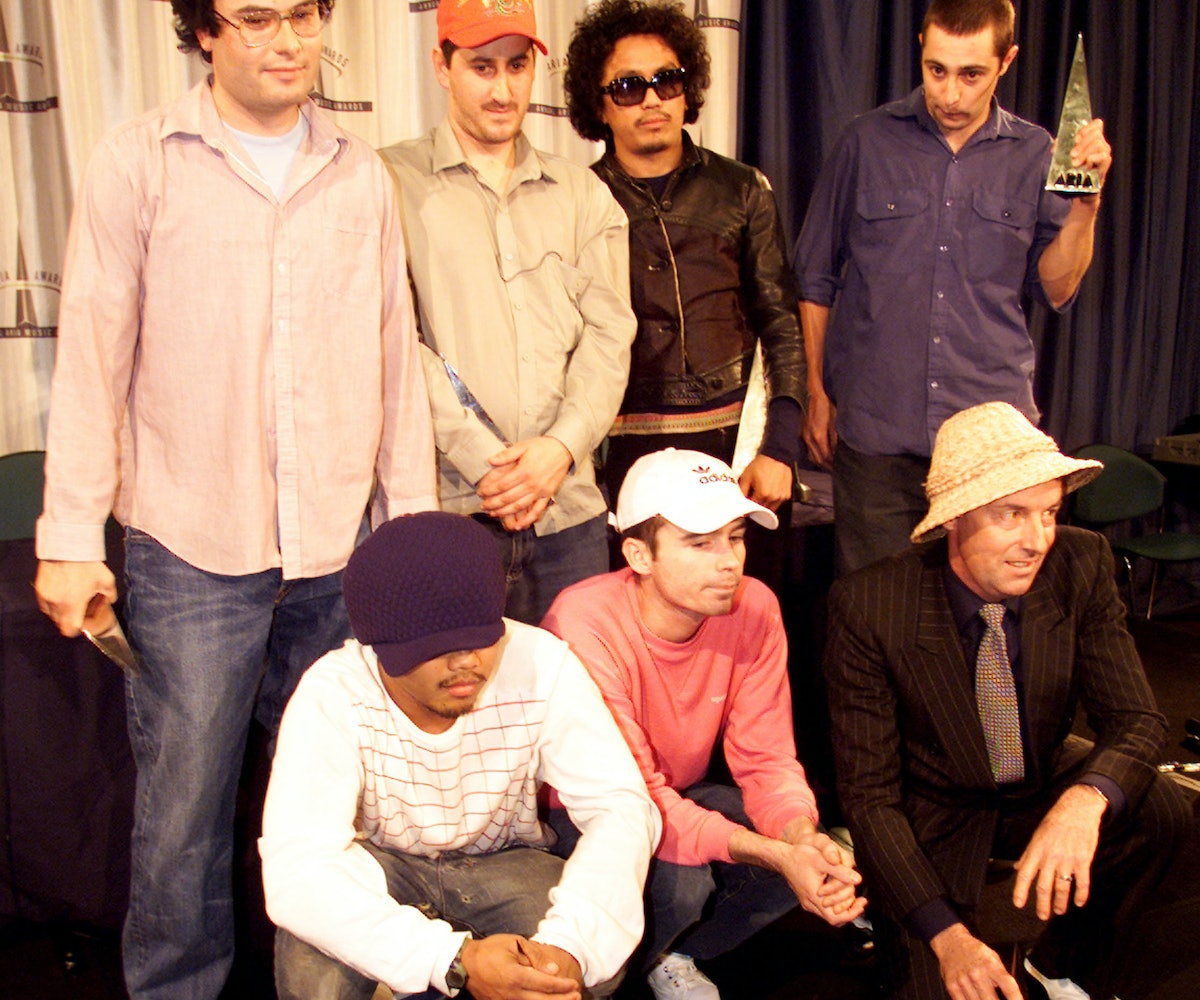 On April 11, a dark and dusty (but not forgotten) corner of the Internet flickered back to life as, without announcement, a simple banner was posted to Facebook. There was no caption and no explanation—only a black satin flag embroidered with a golden butterfly, classic symbolism reserved for the most dramatic of transformations. The air filled with the collective sound of buzzing rumors and fingers clacking away on keyboards. The Avalanches are back. Or are they?

“Or are they” has been a common sentiment regarding a follow-up album from the Australian group we've all come to accept. “They’re just fucking with us again,” one Facebook commenter lamented, echoing the conviction of thousands who have been patiently waiting tableside for scraps to fall from the band who, in the year 2000, delivered Since I Left You, one of the most significant albums of recent memory. “They tease us with some weak signs of life once or twice a year; don’t overthink it, guys,” another cynic pointed out. Contemptuous, but not wrong.

The trail of digital breadcrumbs has been plentiful enough to keep fans satiated, but not full. Their label, Modular, insisted in 2006 that they “made the record of their lives basically.” In 2007, the band themselves left a note on their forum saying, “We have 40 odd songs we’re narrowing down and finishing.” That same year, a 20-minute song titled “Brains (TEAZR)” appeared on their site (and still quietly sits on their server). In 2010, an administrator for The Avalanches’ message board wrote: “I hear Ariel Pink is recording some guest vocals for it, and once those are done, the album will be finished.” In 2012, Jennifer Herrema of Royal Trux revealed she did a song called “The Stepkids” for the band and Danny Brown told Pitchfork he was involved in another song called “Frank Sinatra," reconfirming the collaboration in 2014. Then… a lull. There was nothing, leaving everyone wondering if The Avalanches themselves were crazy in the coconut (those boys need therapy!). That is, until a little golden butterfly appeared.

There's a reason why fans care after all this time. When Since I Left You came out, the original members of the Avalanches—Darren Seltmann, Robbie Chater, Tony Di Blasi, and Gordon McQuilten—presented sample-tinkering in a way that was wholly different from everything else happening around this latest turn of the century. It was an era where technology, and the Internet in particular, was overtaking the pop vernacular. Everyone knew how a modem sounded, Google was still a start-up, and the threat of Y2K was so real, FEMA got involved. Sample-based artists of the time leaned toward glitch, crunch, and dystopia in order to pay homage to tech’s advancing dominance. Radiohead’s OK Computer contained fragments of technospeak and wailed against consumerism, DJ Shadow pushed the limits of sample manipulation, and Girl Talk presented jock jams amid gnawing, raw synths. In contrast, Since I Left You, despite it being the most sample-intensive work available (with a conservative estimate placed at 3,500), decided to say "Nah," and instead of leveraging technology to make a statement on the future, used it to offer a version of the past.

Born out of countless hours picking through record bins in their hometown of Melbourne, Australia, the album was built not on the premise of popularity, but the personal indulgence to create something lighter and more '60s-inspired. Thousands of minuscule, crackling vinyl samples were filtered, looped, distorted, and otherwise mangled, from Madonna's "Holiday" to an obscure 1976 Klaus Wunderlich album called Südamericana 3 "Latin Festival," as the band slowly crafted the audio dictionary that would construct their debut album. It became its own language to the point that, even if recording a simple piano chord would have been easier, they crate-dug for the perfect sample. The fact that their vehicle of choice was harvesting mountains of samples—a licensing nightmare for any label—is a testament to their nonchalance toward fame. Quite simply, they "never thought that anybody would even really hear it." So, free from the pressures of pesky things, like charting and sales, Since I Left You became a curious vision of authenticity, one born out of abandoning original musicianship.

With every iota of sound chosen to transport the listener to another time and place, the album exists in its own imagined world. Here, in their audio terrarium, Spanish guitar breezily nuzzles up to '50s stand-up comedy and horse whinnies, creating a richly complex journey that lies between planes of effortlessness and tangible handicraft. On song "Frontier Psychiatrist" we don't blink at the use of 37 separate spoken word records, but on that same song recognize vocals being manually and meticulously scratched. It's curation in the most highly OCD way possible, but instead of sounding contrived, it's genuine in a way few other musicians have achieved since. Matthew Horton, writing for the book 1001 Songs You Must Hear Before You Die, said it best. "The album [Since I Left You] in microcosm—[is] busy, daft, composed of countless unconnected parts, yet somehow entirely natural as a whole."

This is what makes the album special, why they have the cultural cache to retain their fans after so many letdowns. If The Avalanches were our boyfriend, our pals would be telling us, “Girl, you gotta stop watering dead plants.” But we persist, and hang on to the one match still illuminating the blackened void they’ve left. Because even after a decade and a half, there is no contemporary counterpart to what they created. While trendy "trop house" currently dominates airwaves by emulating the dancehall and Balearic sounds of other cultures, Since I Left You delivers a vacation to its own imagined destination. There is no particular time it belongs to, no nation for it to claim. Listening to it delivers a feeling as if you've actually been somewhere, and even after visiting time and time again, there's always something new to be romanced or surprised by.

All of this is why a tiny symbol (perhaps not coincidentally) caused a crashing butterfly effect when it was casually posted earlier this year. We were no longer relegated to rumors or third-party information, this was an announcement, a planted flag to make sure the world knew something was in store. The updates that came afterward were swift but equally cryptic. Festival dates were posted; they released a teaser video called "Since They Left Us" featuring snippets from two new works, identified by Shazam as "Subways" and "The Wozard of Iz," and appearances from every rumored collaborator as well as Father John Misty. While exciting, it also cheekily self-referenced their abundance of failed promises, both outright and allegorical (such as flashing images of Barcelona's Sagrada Família, the architecturally groundbreaking church that's been under construction for more than a century). And that's how we get to comments like the Eeyore-esque “They’re just fucking with us again.” Except this time, we think they're not.

With news about the band now coming directly from the band, shows on the docket, and the above teaser video that seems to confirm years-old rumors, it's more than safe to say the unicorn that is The Avalanches' second album rests nearby. At the very least, it looks like we'll have a new single (some say this week), as according to Reddit sleuths, "Frankie Sinatra," the alleged collaboration with Danny Brown, was copyrighted with APRA just weeks ago under bandmates Chater and Di Blasi's names. It's an intricate trail of tiny clues that once again has us hovering in anticipation, awaiting the next avant-garde adventure they'll bring our way. And to anyone who's asked whether it's even worthwhile for The Avalanches to follow up a body of work that has, in its own right, become mythically perfect; well, ask the butterfly about rebirth, fresh out of its cocoon.