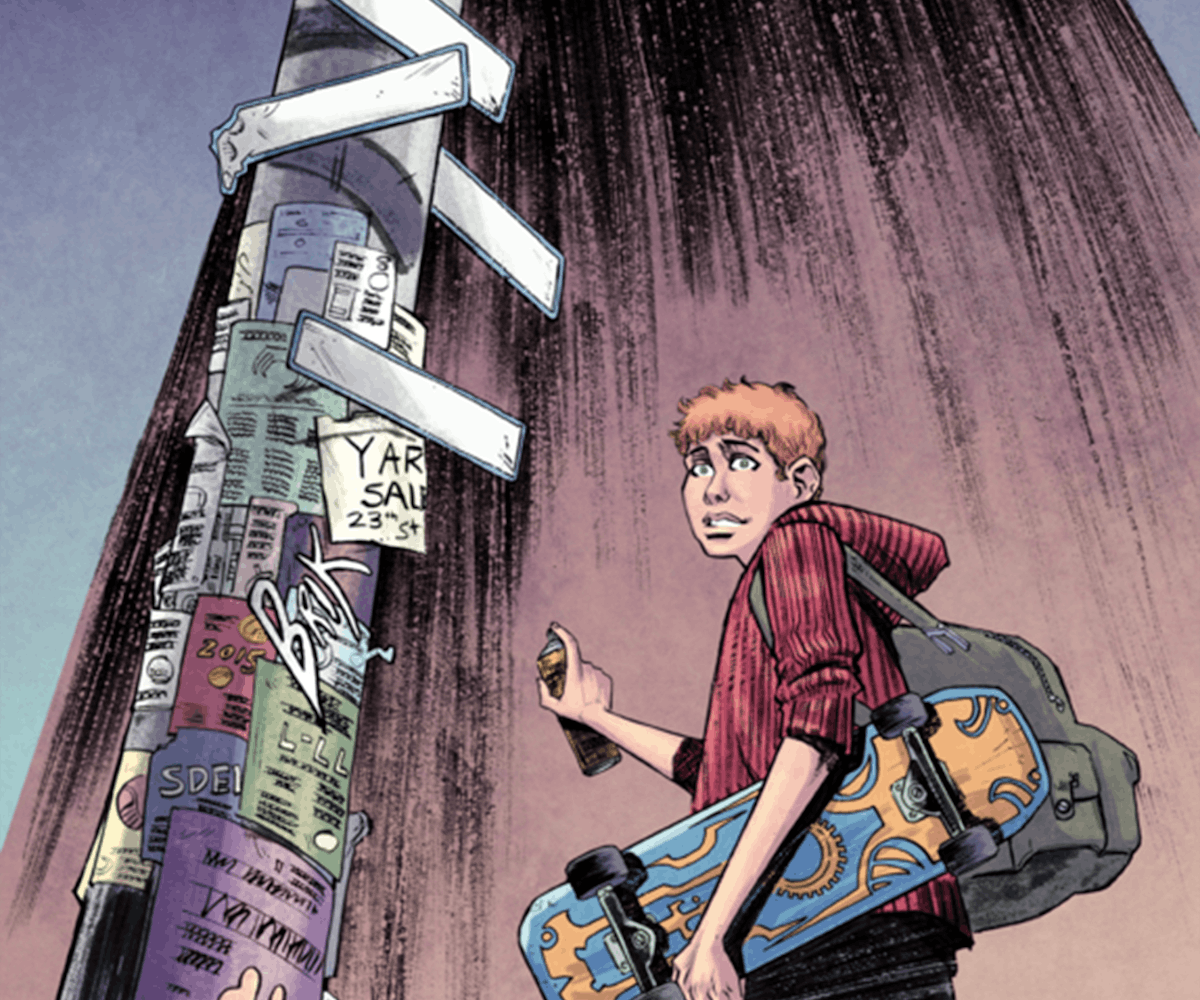 In an age of corporatized superhero blockbusters, writers Michael Benson and Adam Glass tell nuanced narratives. The duo first met on a picket line during the 2007-2008 Writers Guild of America strike. Benson had worked on HBO’s Entourage while Glass was getting ready to write and produce the CW sleeper hit Supernatural. A friendship was struck and suddenly the two were writing graphic novels together. Their creative partnership for Marvel has created stories where Deadpool is reimagined as a Cold War pulp thriller, Luke Cage wanders through a Prohibition-era Harlem defined by institutionalized racism, and the Punisher remains permanently trapped in his past hatreds. Throughout these immoral worlds filled with moral characters, Glass and Benson infuse philosophy with historical research to create their own folklore. Their newest collaboration Brik mythologizes classic Jewish traditions while examining the ravaged socioeconomic landscape of modern-day Yonkers, New York, through the perspective of Drew, a teenager waging war against the Russian mafia with the help of a golem named Brik. We spoke to Glass and Benson all about building worlds through writing and their exciting new project.

How did the collaboration come about?

Michael Benson: Adam and I met on a picket line... We talked about our interests. Adam mentioned he was a huge comic book geek and I was writing books for Marvel at the time. We instantly bonded on many things: New York, noir, movies. After that, we’d brainstorm on the Deadpool book I was writing. A few sessions later, I asked Adam if he wanted to join me on the book and from there started our collaboration. That book turned out to be Deadpool Suicide Kings. We then wrote two additional books we’re very proud of: Deadpool Pulp and Luke Cage Noir. We had a blast writing them together and wanted to create our own book. That’s how Brik came to be.

At its core, what is Brik?

Adam Glass/MB: At its core Brik is a symbol. A symbol of hope. The story of the golem originated in the Kabbalah, a history of mystic lore, which came to be in the late Middle Ages and grew in stature during the 16th and 17th centuries. It was a time when the Jewish people needed faith and strength to endure their sufferings, so they created a mythical clay monster to slay their enemies. Brik is a source of inner-strength to those who have been persecuted and are in pain, both in the past and still even today.

How does Brik resonate in modern America?

AG/MB: I think especially today, anyone who is struggling with inner pain, bullying, identity issues, and discrimination will be able to relate to Brik. The idea of Brik is you’re not alone in this world and, like Drew’s grandfather Sonny tells him, “There’s always a way.” For Drew, who is in an impossible situation, the golem is his way out of it.

Why did you choose to set the story in Yonkers?

MB: My grandparents lived in Yonkers for 40 years, and as a boy I made friends with kids from all different backgrounds and cultures.

AG: I grew up in the neighboring Bronx, so I knew Yonkers well too, mostly through the raceway. My grandfather liked to skip services at shul and take me to the horses instead.

MB/AG: Setting Brik in this melting pot of old world culture felt right to us. Yonkers had a lot of people who immigrated from Europe and other foreign countries and many first and second generation families were living on the same streets in the same houses. The elders would share stories from the old world. It just felt like the perfect environment to tell this particular story.

Yonkers is periodically invoked as this land of opportunity that embodied the American Dream. Is the past overly romanticized?

MB/AG: No, we don’t think it’s overly romanticized.  Back in the '50s and '60s, Yonkers was a city of opportunity. Many houses were newly built. Children from all backgrounds were able to get a good public school education and there were jobs for their parents. It was a place where a family could live the American dream. The '70s is when things turned and got rough around the edges.

How do the ideals of the old world clash with the new world in Brik?

MB/AG: Drew is obviously new world and faces problems any kid his age might face. He’s being bullied and feels he doesn’t fit in. Things at home are not ideal. Then his family comes into another new world problem; the Russian mob is leaning on his mother and grandfather to sell their building or suffer retaliation. So Drew uses an old school solution—brute force. He enlists an ancient protector to help defend his family and community.

What is the role of the golem in this conflict?

MB/AG: Brik is a number of things. Peacekeeper. Enforcer. Friend. In many ways Brik is everything Drew wishes he can be—powerful, feared, respected.  And after the two spend time together and go on adventures, Drew becomes closer to the kind of person he wants to become.

The golem acts as this mediator to balance the forces of light and darkness. However, if you remove the golem from the comic, this is actually a morbid story about a young boy whose grandfather is murdered and mother assaulted. Is Brik intended to read as a tragedy?

MB: We pitched Brik early on as History of Violence meets Iron Giant. Brik was always meant to have tragic elements to the story. That’s where our golem comes in.

AG: When people are repressed and at their lowest point, they need hope; otherwise desperation sets in. So is the story tragic? Yes. But it's also fun, hopeful, and inspirational.