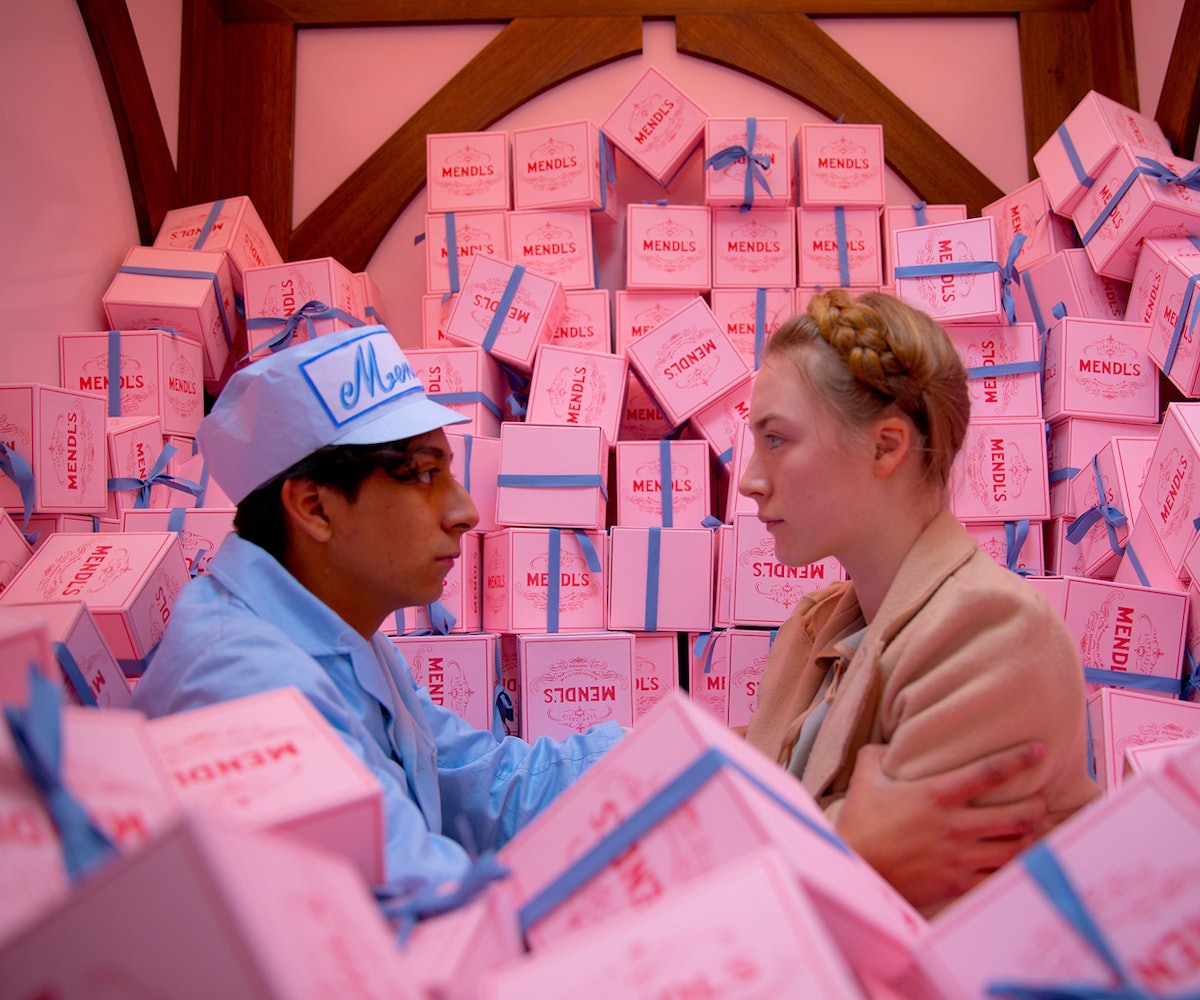 all photos via fox searchlight pictures

You might not be one of those people who stays until the very end of a movie to read all of the credits. I don't think most people are (unless your BFF just happens to work in the business). But, next time you go splurge on tickets, a box of candy, and a jumbo-sized popcorn at the theater, make sure you get enough Sno-Caps to last you through the entire thing. That's what I did at the New York City premiere of Wes Anderson's latest film The Grand Budapest Hotel--and seeing the actual names of actual people who make all of his beautifully imaginative sets and objects come to vivid life is pretty cool. When the name for the film's lead graphic designer, Annie Atkins, came on the screen, all of the objects from the film rushed back to me in one fast instant: a book cover, a pastry box, a passport, a telegram--everything that helps to make a Wes Anderson film what it is. So just in case you're wondering how these classic items start as a vision and end up as icons, the answers lie in my interview with Annie Atkins:

Can you tell me a little bit about your experience? I'm wondering how you first got into graphic design and how it led you to working with Wes Anderson. (I'm a huge believer in fate)

I'd been a graphic designer for years, firstly for an advertising agency in Iceland, then for historical TV shows in Ireland, like The Tudors. But the call from Wes' producer really took be by surprise. I'd been drawing graphics for the animation studio Laika, for their new feature The Boxtrolls. when I got an email from a designer there that just said, "Something wicked your way comes...". I had no idea what he meant. Something wicked?! It turns out they had a recommended me to Wes and the next thing the phone ran about "a film set in the Alps in the 1930s...". I was in Gorlitz a week later, working with the brilliant production designer Adam Stockhausen (who was just nominated for 12 Years a Slave at the Oscars), helping create Wes' fictional State of Zubrowka.

What kinds of things were on your inspiration boards while designing projects for this movie?

Ernst Lubitsch. One day I got to my desk and Wes had left me a bundle of his films. They were all made in the ‘30s and were a real inspiration for graphic design for the movie. Actually, I don't think it's just the art direction of the film that was influenced by Lubistch, but also the action--he gave the same films to Jeff Goldblum, Adrien Brody, and the other actors to study, too.

Your website slogan says that your work is for Film, TV and Real Life. When it comes to Wes Anderson films, where do you think the line is drawn between film and real life?

Wes' films all have a huge amount of imagination to them, but then they're also based heavily in reality, I think. Adam said when I first started that every graphic should be based on a real artifact from the period. We would look up hundreds of references, and Wes would pick out things that he liked and then we'd work from there. He might start with an official document from 1930s Germany, and then say, "Okay, now let's try that again, but this time with pink...". It means you're working within a world that you recognize from history, and yet you're completely enveloped in this gorgeous, heightened world also.

How much direction did Wes give you for the designs? How did he describe what he wanted?

Wes gave complete and thorough direction at all times! I showed him everything I made about two weeks before it was shot, so we'd have time to rework it to his style. He is really creating his own world here, something so distinctive. He's very clear in what he wants--either describing it in words or showing me references he and Adam had found on their travels. I was able to bring a certain amount of experience to the table, as I've worked on a few historical dramas, but Wes was always turning things on their heads. "Yes, let's use this, but now try this with it...".

An art director I know once said he loves designing sets for film because "you get to do everything an architect does, but without having to worry about plumbing." I think that's a good way of putting it! Graphic props have to work in the actors hands, take after take, and sometimes in heavy rain or snow, or being splattered in fake blood, but at the end of the day it's about the visual--how is this going to look on camera? It makes it a particularly fun branch of graphic design to work in.

We looked at so many perfume bottles, but also lots of other kinds of packaging from the period. The typestyle you see on the bottle in the film eventually came from a sign from a café in France from the late '20s. Wes loved the 3D feel of the shadow on the lettering. It was then hand-painted for us by a glass painter in Berlin. I think she had to use a magnifying glass to paint some of the smaller bottles--we had quite a selection made.

The pastry boxes were really fun to work on, too. The art department was sent a tray of pastries to eat one afternoon. They were these tall, very sculpted pieces, with quite a lot of color in them. They were delicious. It was like eating a Wes Anderson movie.