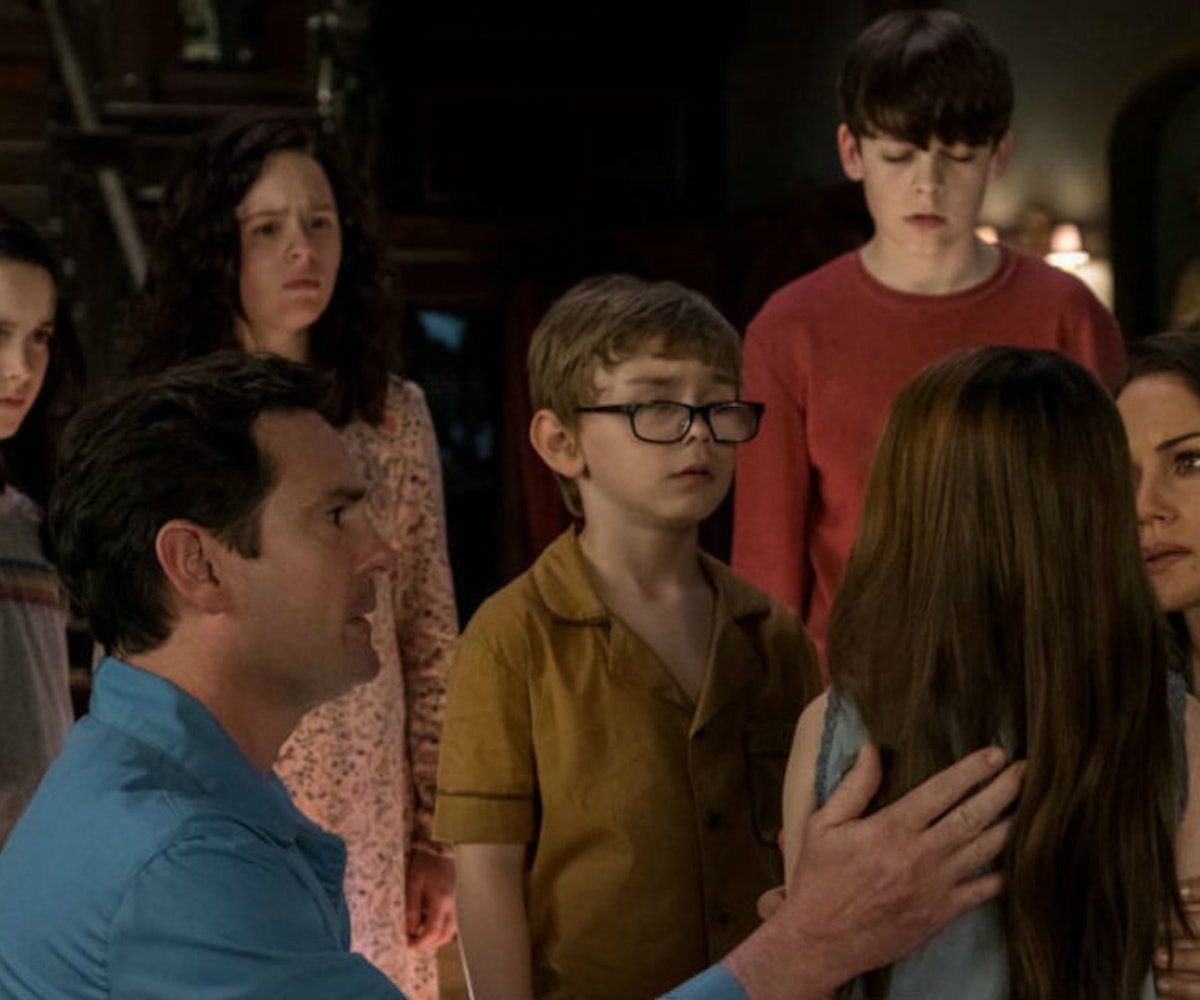 If you’re not watching The Haunting of Hill House, you’re probably not a horror person. Because everyone who can tolerate the genre has already binge-watched the new 10-episode Netflix show. And those who are wary of horror probably should stay wary—this isn’t Sabrina-level scary, it’s burrow-into-your-brain-and-stay-there scary. Gone are the days when monsters hiding under your bed are the only source of terror. In 2018, there are still monsters, but we’re also confronted with the effects those monsters have on a person’s psyche—and their family—over time.

But there’s something else other than fear that helps bring the show to life: the clothes.

The show, loosely based on the Shirley Jackson novel of the same name, follows Olivia and Hugh Crain as they move their five children (Steven, Shirley, Theo, Luke, and Nell) into an old estate one summer. Time flashes back-and-forth from the Hill House of “then” and the family today, piecing together the events of the past and how that’s impacted their lives as adults. Aging looks is a key tool in separating the two sides of the story, but another factor is what the characters wear. Costume designer Lynn Falconer pulled from early ‘90s fashion for the throwback scenes, which means a lot of bucket hats, jeans, and patchwork dresses worn over T-shirts. “1992, to me, is not the best fashion period,” Falconer tells us. “Now, it's shifting and it's cool, but back then it was very catalogue—a lot of white and primary colors, Tommy Hilfiger… The '80s shoulders were still there. It was not a great time period to tell a horror story, so I had to dig a lot deeper to find other essences.”

Viewers might notice that there’s a pretty distinct color difference between the two worlds. The ‘90s scenes are warmer, there’s a lot more light and vibrancy to the characters. Modern day, on the other hand, has a morose washed-out appearance; there’s a blue-gray tint that hovers over almost every scene. This is reflected in the clothes as well. Falconer says that she wanted to have that “thread of young and older, something I weaved into the tapestry.” For example, in using the book as a springboard, she assigned the color yellow to Theo and the color red to Nell, themes that follow them throughout the show.

For the family’s matriarch, Olivia (played beautifully by Carla Gugino), Falconer says she was inspired by Julie Christie in Don’t Look Now and Jessica Lange in The Postman Always Rings Twice. “We wanted to find a balance between a bohemian mother who might’ve gone to the Lilith Fair and this professional cosmopolitan architect.” Everything Olivia wears required research, down to the stunning robes she often wears (“those were actually very ‘90s,” Falconer says). She even pulled from her own personal sartorial memory bank. “The high-waisted pants and the leather necklace she wears with the locket, that’s just me… those are things I wore in New York back in the ‘90s.”

Then, we have the ghosts (spoiler: Olivia is both a real person and a ghost in the show). There are several spirits that haunt the Crain family, the most standout fashion-wise being Poppy and William Hill. Both are from the 1920s and wear staples like silk dresses (the lace detailing on Poppy’s dress comes from an original vintage dress) and a bowler hat and a long Chesterfield coat. Pictures were also included that show what the characters looked like as time passed to help with the direction. “We were supplied a very rich backstory for these characters,” Falconer says. “Poppy was actually described as a flapper in the script, and I mean how much fun is that?”

As much as the fashion in the show can act as a time capsule for the decade, Falconer says that she tries to stay away from trends when dressing characters. She wants her outfits to “stand the test of time” and refers to this approach as the “disappearing wardrobe.” The clothes that are eye-catching, but don’t stand out enough to distract from the overall film. The clothes that are practical, but still fashionable. She points to characters like Ellen Burstyn in The Exorcist and Nastassja Kinski in Cat People as examples of the “disappearing wardrobe” done well.

Overall though, Falconer says she tries to not be influenced by older horror films because “you’re going to end up bumping into something from the past.” When I bring up the fact that it seems like a lot of spirit-like characters tend to wear white nightgowns (including several in The Haunting Of Hill House), she agrees, saying that sometimes overlap is inevitable. “That has to do with femininity and ghostliness,” she explains. “How interesting would it be to have them wear a black turtleneck instead of a white nightgown? Problem is, there are a lot of technical problems with that.”

Fashion has pulled inspiration from horror films a lot recently, and part of that might have to do with the fact that it kind of feels like we’re living in a real-life horror film more and more these days. “It’s a tough time to be living, the direction and the terror,” Falconer says. “Fashion and the runway is extremely cultural, and it’s kind of funny, but also horrible, and maybe that’s what [designers] are pulling upon.” But also maybe the industry is realizing that a lot of horror movie characters can double as street style icons. The screams may be the big draw, but the fashion is no less important to the feel of a movie or show. “There's something about horror that pulls a lot of different strings, and part of the terror is creating a reality that puts the reader into that story,” Falconer says. “Because the ghosts, they can either be really scary or not, and there's a really fine line. The fashion that disappears, and you're like, ‘Hey, I like the way she looks,’ can be a lot more powerful than the 'hit you between the eyes' stuff.”

NEXT UP
fashion
How ‘Spice World’'s Costume Designer Nailed The ‘Scooby-Doo on Acid’ Look
Culture
Phoebe Dynevor Will Not Return for Bridgerton Season 3
Fashion
Olivia Rodrigo Wore A Sheer Slip Dress To The 2023 Grammys
Fashion
Apple Martin Is A Chanel Girl Now
Style + Culture, delivered straight to your inbox.