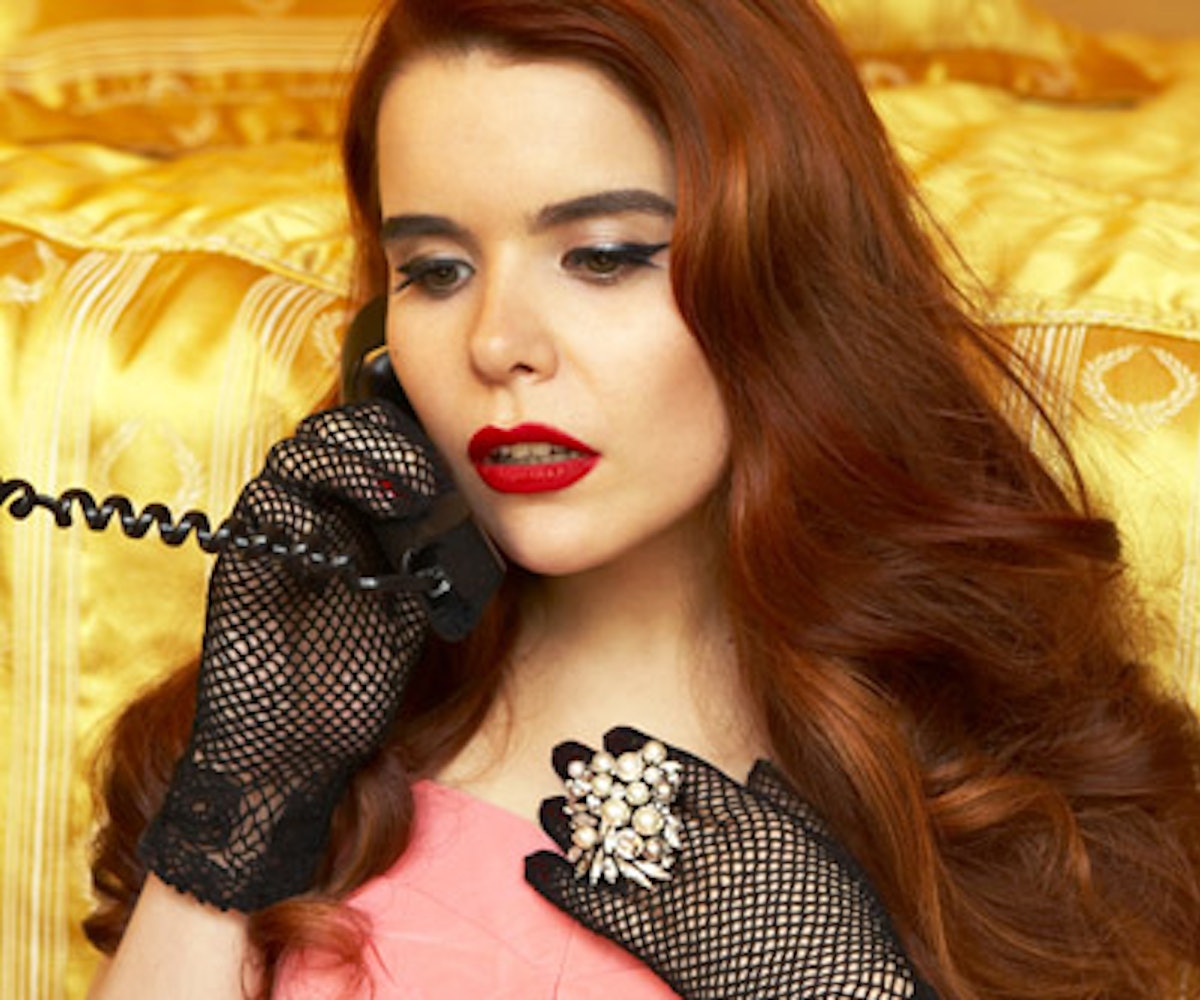 Paloma Faith is one of those girls who feels like she comes from another planet - her eyes are huge, her hair is scarlet, and her voice is so particular (in her case, high pitched with a bit of a whisper when she ends her sentences) that you're convinced she's too original to share our human DNA.

But Paloma is earth-bound indeed, and finally working on her second album - a follow-up to last year's smash hit, Do You Want the Truth or Something Beautiful? We spoke with the soul singer and style setter on a long-distance London phone call...

Last October, you were in NYLON's It Girl issue.  It's a year later - what's changed?  I think my music really took off, in the UK especially.  My album went to number nine here, and it went platinum and I've got a disc now and I'm selling out tours and stuff.  I can't really walk down the street without people saying "Oh, can I have a photo taken with you?"  Which is new!

What about your music?  I think in a lot of ways, my voice has improved since I recorded the album.  I've been performing so many shows that now it's more experienced, I'm looking forward to hearing it on a record!

Any info you can tell us about that?  Well, I did a lot of festivals this summer, and I felt I had a lack of songs that made people dance.  That frustrated me, so I knew I wanted [the album] to be a bit more up tempo, and I was trying to be a bit more fun.  But I've been less preoccupied with the sound of it, and I've been writing the songs for the song's sake, if that makes sense.  Not "this has to be fun," just "let's sit and write this down."  I'm still looking for a producer.

What kind of person do you want in the studio with you?  I think I work best with people who are quite sensitive; who sort of let me go free with the lyrics, because I think that's my strong point.  And people who have a sensitivity and an understanding of the human condition.  Not people who are trying to force writing a hit, or whatever they call it.  That kind of person, maybe they should get someone else for me!

What are you reading right now?  At the moment I'm reading Breakfast of Champions by Kurt Vonnegut.  It's quite funny.  I'm friends with someone who's sort of thinks in a similar way to me, a guy, but he's a bit older than me, and he sort of said, "Look, you have to read this because it made me reassured about the way I think."  And he's totally right.

Now you know I have to ask - what's your breakfast of champions?  I really like American breakfast, like pancakes and syrup!

What are you obsessed with right now?

Terry Gillium directed that - and directed you in The Imaginarium of Doctor Parnassus! I really want to act more now that things have died down a bit with my first album. I was in St. Trinian's too, and that severely fun to make - the set was hysterical.

Wasn't Lily Cole in that movie, too?  She's a real redhead though.  I'm a fake ginger!

I think she just went brunette, actually.  Oh no!  Really? You always want what you can't have.

What's the worst advice you've ever gotten?  That's a funny thing!  The worst advice would have been... fuck, I'm thinking about it.  I've completely forgotten all the bad advice because I'm so full of good things that people have said!  But that's a bloody lame answer.  I'm sure someone's given me some shit advice...  I think like, "Always believe in yourself" is bad advice, especially for British people!  British people love to put themselves down and I think that's what's brilliant about British art, it's kind of all about that self doubt and stuff, so yeah.  I think probably when I was in America, and someone said "Have a nice day!"  That's bad advice.  I'd write really bad shit cheesy pop songs if I had a nice day every day!  When I was in Atlanta, I did a voicemail for the studio I was working at.  They were so funny because they thought my cynicism was hilarious.  I said, "Hi, you've reached our studio, uh leave your name, and have a shit day!"  And they thought it was so brilliant!  They said it stayed on their answering machine for five years!

Last year, NYLON did a story on girls who worked in lingerie stores.  You've worked in Agent Provocateur - can you tell us anything fun that happened to you?  One of my favorite things that happened was that quite regularly, a pre-op transexual high class prostitute used to come in and buy her underwear off me.  You know chicks with dicks?  She was like a prostitute, but one of them.  I'll leave her unnamed, but she'd come in sometimes in a dramatic whirlwind of excessive panic and ask me to look after her cat!  She has a pedigree Persian white cat that she'd walk about with in a bag.  She used to leave me with this cat in the stockroom!  "Can you look after him, I've got to get upstairs!" The cat's name was Caesar - She's Italian; she's Italian.  That's not even the best story I have.