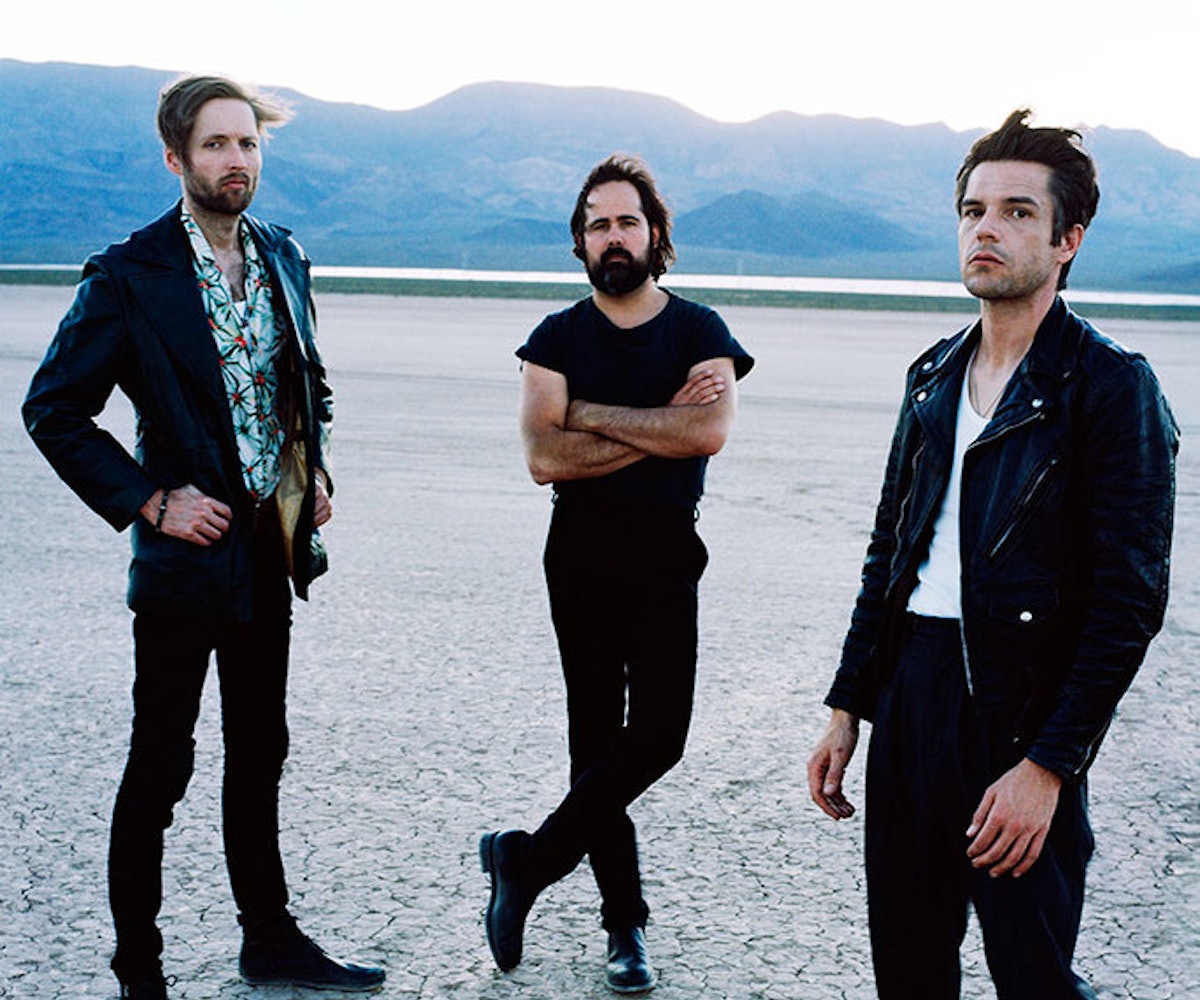 “How did I get here?” It’s the question that singer-keyboardist Brandon Flowers found himself asking while working on the most tender moments of Wonderful Wonderful, The Killers’ fifth full-length, released today. For answers, he went back to the beginning, dissecting the snotty, swaggering 21-year-old he was when the band started working on its hit-filled debut, Hot Fuss. He channeled that character for Wonderful Wonderful’s first single, “The Man.” “I’ve got gas in the tank/ I’ve got money in the bank/ I’ve got news for you, baby: You’re looking at the man,” he sings sarcastically over a late-night disco beat.

“When we first started, I was really insecure,” Flowers says, sitting with drummer Ronnie Vannucci Jr. in a hotel room in New York City’s SoHo neighborhood. “I was performing. It wasn’t really me. I did feel like I was God’s gift,” he admits, laughing. “When you’re growing up, you have this perception of what it is to be a man. It usually revolves around being tough, and bringing home the bacon, and being suave. And what I’ve come to find is that to be a real man you have to have a lot more empathy and compassion.” The single attempts to reconcile those realizations, though its humor makes it an outlier on the pointedly mature album. The Killers have been together for over 15 years, so it’s appropriate that Wonderful Wonderful feels almost like a coming-of-age record.

The band’s origin story dates back to 2001, when Flowers and guitarist Dave Keuning met through a classified ad in a Las Vegas newspaper. The first song they wrote together was “Mr. Brightside,” which they then performed at an open mic. Vannucci and bassist Mark Stoermer, who played around in other local bands, joined in 2002. A few years later they made it big: That first track would go on to be hailed as one of Pitchfork’s best songs of the century, and they would eventually sell a total of over 15 million albums worldwide.

But when Flowers, Vannucci, and their counterparts were thrust into the spotlight, they were still getting to know one another. “It resembles a marriage,” Flowers says of the group’s dynamic. “Like any relationship, it takes a lot of work. We’ve lasted longer than a lot of other bands.” “They say that seven years into a marriage is when [it] starts to get tough,” Vannucci adds. “It’s the same for a band. We’ve had two of those seven-year stretches.”

Creative endurance inevitably requires some level of transformation—which they realized during a visit to producer Jacknife Lee’s Los Angeles studio. “Brandon and I drove out to [Lee’s] place,” Vannucci recalls. “We were sort of interviewing producers. One of the things he said was that he believes in rock ’n’ roll but that we’d have to do something different. And it was going to be slightly uncomfortable.”

The band took up the challenge, making Wonderful Wonderful the first project on which they let a producer in so closely to the recording process. “We needed some perspective,” Vannucci says, “somebody with a bit of an outside-looking-in approach.” The end result is one of their most fully realized albums, from the heavy and ominous opening title track to its searing ballads, sky-high story-songs and satisfyingly melodramatic soft rock. The record follows 2012’s Battle Born, marking the longest hiatus the chart-toppers have ever taken between albums.

The new album meditates on strength and vulnerability, successes and failure, and masculinity and idolatry. At times, Flowers’s voice sound seven more muscular than usual, but these moments are also among his most introspective. A-side closer “Run for Cover” is the album’s pulsing heart, an ambitious narrative recalling the group’s earnest, Springsteen-inspired sophomore record, Sam’s Town. With explosive rock riffs and soaring electronics, it plays out like a 2017 synth-laced post-punk update to “Born to Run.” Its arena-sized heartland rock channels don’t-look-back escapism, but here instead is a song about a less savory topic, though one as American as apple pie: running from toxic men in power. Where the Boss sings about running with abandon to find the meaning of love and freedom, “Run for Cover” isn’t full of everlasting kisses in the street.Rather, the song is about survival. “It’s even harder when the dirtbag’s famous,” Flowers sings. Despite the song’s timely references to fake men who are “fake news,” the singer actually started writing the song nine years ago. “My brother would send it to me once a year and say, ‘Don’t forget this song,’” he recalls, “but we just didn’t have it finished.”

“It’s a warning cry,” Flowers continues. “It’s like reaching out to someone and trying to shake them awake, when you see them heading into some sort of abyss.” The song is inspired by his upbringing with his four sisters, and seeing what they went through. “As a man, I can’t really fathom what it is to truly be a woman and all of the challenges that come with that,” he says. “But I do know what men are capable of. And that’s some pretty bad shit sometimes.” It’s not the only place on the album where he draws inspiration from the women in his life, and processing their struggles: On “Some Kind of Love” Flowers writes about his wife’s experience with PTSD, stemming from traumatic times in her youth. And on “Rut,” a cut full of hope and background singers, he writes from her perspective.

As Wonderful Wonderful closes, The Killers pose a huge question: “Have all the songs been written?” Flowers sings, over the album’s most sparse and solemn riff. Clearly, they have not, and here, at 36 years old, Flowers shows that we never stop needing to document the process of growing up, of rediscovering ourselves.