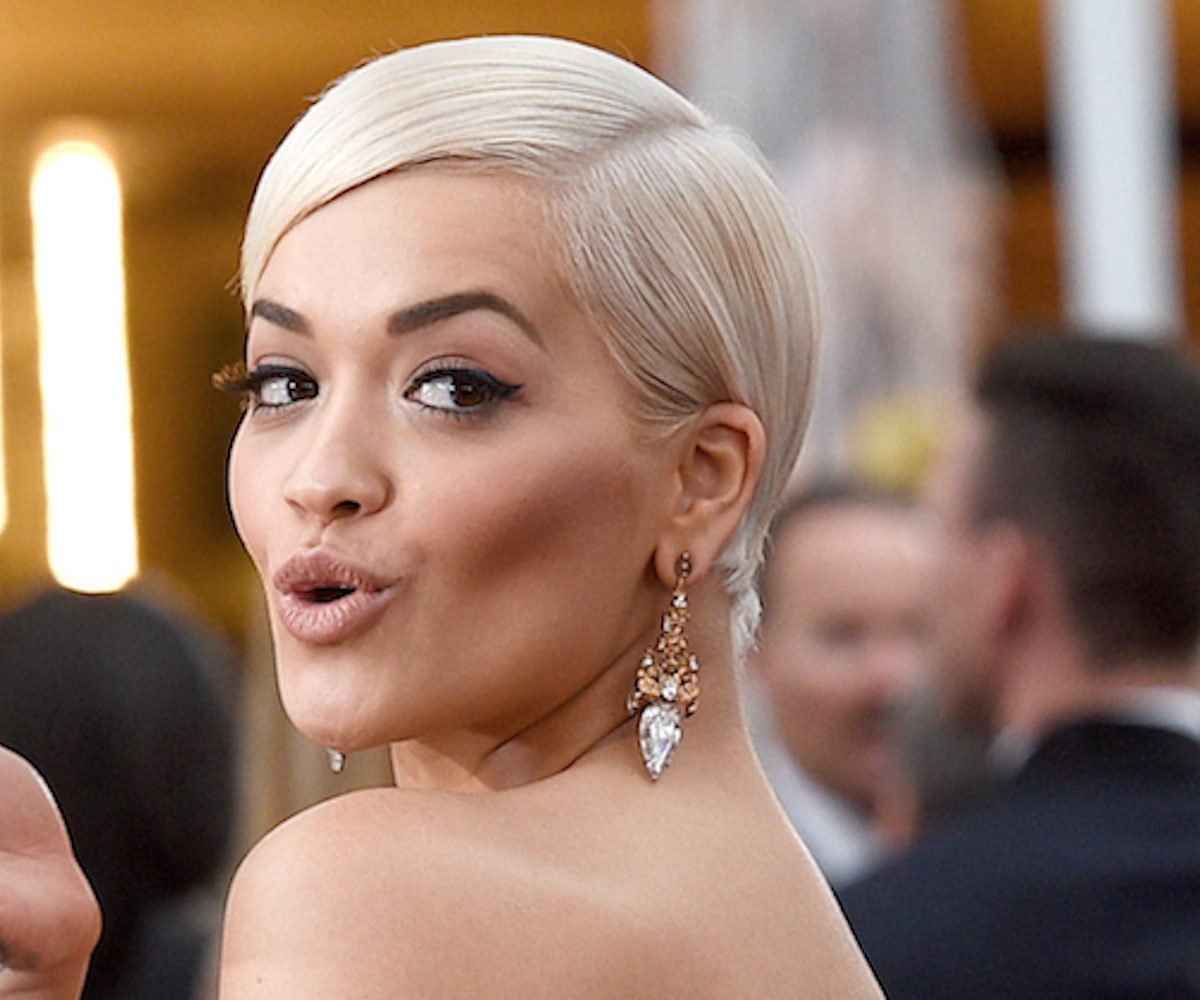 Rita Ora's "Girls" had the singer apologizing to the LGBT community within days of its release. The main issue, as taken up by both the queer masses and well-known musicians like Hayley Kiyoko and Kehlani, has been centered around how the song connects kissing girls to drinking and smoking pot. Still mildly traumatized from coming out during "I Kissed A Girl"-era Katy Perry, I opted out of listening to "Girls." Life is unpleasant enough; I don't really see the need to sign up to consume something offensive.

And yet. As the think pieces and hot takes continued to roll in, I became, in the words of Lesbian Jesus Hayley Kiyoko, curious. So, this morning, I pulled up the official lyric video and settled down to feel some feelings. Nothing I've read about this song prepared me for its actual content.

Let me step back for a minute and provide some personal context. I'm the editor in chief of the publication you're currently reading, and also a lesbian. I didn't have a super-confusing time coming out; once it was women, it was always women. But I vividly recall being 18 and terrified, and my peers also being terrified; for a lot of them, a lot of the time, they couldn't even talk to other girls without at least one drink. I was frequently hit on by women who claimed to be straight but would then start drinking and be positively unable to stop flirting with the girls around them. Most of them are now openly bisexual, if not gay.

To me, the lyrics "red wine, I just want to kiss girls," are specifically referencing that period of time before you come out, when you're maybe so terrified to honor your own desires that you need a little extra push in substance form to do so. That wasn't my experience (I was completely sober the first time I was with another girl, and the next and the next), but it's the experience of a lot of people I know who are now fully formed adults with strong senses of self and proud identities in the LGBTQ spectrum. I don't think this is a bisexual anthem, I think it's more of an ode to pre-queerness, a very real period of time for a lot of people who, as products of a heteronormative society, repress their desires. (Please don't yell at me.)

And while the premise of needing to be intoxicated to want to kiss girls is annoying to many, it pales in comparison to the other problem, which is how deeply misogynistic the rest of the song's lyrics are:

You know I tamed it, and then I named itI put the lion in the cage and then I laid with herAll night (all night)Her all night, yeahI'm the hunter and she the prey, yeahI'm the thriller, I'm the killerI'm the savior, up all night

If a man were to sing these lyrics, I have no doubt that we would be setting his digital house on fire: Putting the lion in the cage?? She's the prey, and you're the hunter? How is this language not being called out for its inherent misogyny?

One of my biggest bones to pick with the queer community is how toxic masculinity gets a pass when it comes from a woman. Behaviors we would never accept from men are overlooked when they occur between women, though they are often just as destructive. The issue with "Girls" is not so much that it reinforces stereotypes about bisexual women but that it upholds the systematic oppression of women: If we're comparing a woman to an animal, bragging about taming her and putting her in a cage and calling her prey, it doesn't matter who is singing the song. Mouthpieces of the patriarchy come in all genders.

And in this case, the women singing this song are quite literally mouthpieces. As many have pointed out in the days since its release, "Girls" was written by a bunch of men. Their interpretation of same-gender desire seems to be that it mirrors an outdated heterosexual model which positions men as hunters and saviors of women. Nothing about that is radical or revolutionary or deserving in any way of an anthem.

This song is disappointing at best and deeply harmful at worst, not simply because it invalidates the legitimacy of bisexual desire by linking it to drugs and alcohol, but because it talks about something inherently radical—desire between women—in the language of the oppressor.