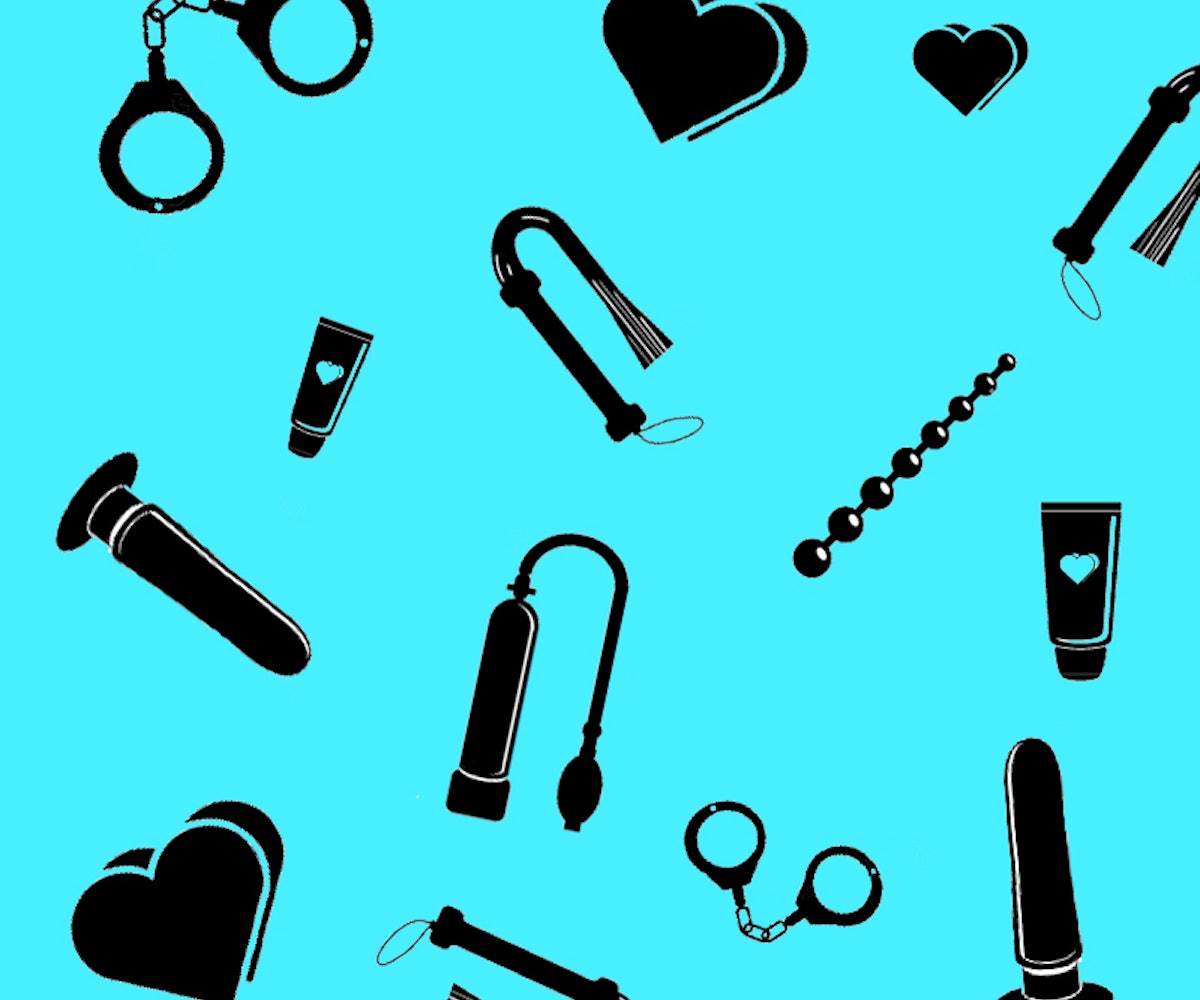 While sitting all day can feel tedious, the information presented was not. In full force were self-proclaimed “sex nerds,” simultaneously showing off their science chops and love for getting it on. In a small, dark theater, the event’s organizers and speakers took turns holding court over the audience, sharing the latest research on everything from polyamory and kink to how role-playing is being used to treat illicit sexual desires that could otherwise be dangerous to society. Of the fact-filled day, here are 10 things we learned.

As any woman who has dealt with the stigma of sex work will tell you, for whatever reason, many pearl-clutching members of society still have a hard time allowing sex and intelligence to be in the same room. Every old-fashioned thinking person in the world should be required to attend an alt sex conference so they understand that you can absolutely be smarty pants and still be interested in sex.

Along with journalists who wrangled their way in, such as myself, the audience was predominantly made up of academics, some having traveled all the way from Seattle to attend. It was delightfully refreshing to see audience members raising their hands to ask questions on everything from golden showers to adult babies, and not only being taken seriously but having their questions met with legit sex science-backed answers. “With any kind of sexuality, whether it’s orientation, whether it’s gender issues, whether it’s lifestyle issues, you need a firm scientific basis to be able to come to [join] public discussion with evidence that supports your position in the face of bigotry. You need the research. It’s absolutely essential,” says co-founder and organizer Dr. Michael Aaron.

Heterosexual Monogamy Is Not The Norm Everywhere

First up to bat: Dr. Margaret Nichols, who gave a presentation titled “Kink is Good: BDSM in the Context of New Models of Sex and Gender Variance.” Explaining that sex and gender diversity have always existed in nature (animals from dolphins to bonobos engage in sex for other reasons than just to reproduce), Nichols used examples from history and around the world, from polyandry in Tibet (where the woman gets to have multiple husbands) to Will and Jada Pinkett Smith’s marriage (the subject of open relationship rumors) to show that “normal” sex and relationships, aka the heteronormative and monogamous sex and relationships our cable networks seem to love so much, might not actually be so normal.

Everyone Can Learn From The Poly And Kinky

However, as Nichols pointed out, there are few things everyone can learn from the polyamorous. In particular, if we all worked on managing our jealousy, relationships of all kinds would go a lot smoother. As for the kinky, well, to know how to tie all those fancy knots in a bondage scene you need practice to make perfect. So even if it’s just vanilla sex, why not make an effort (or ask your partner) to sharpen up those skills? She also dished out some helpful advice on how to be less judgmental of other people’s sexual interests, and to instead simply view it as a food preference. Oh, Kelly likes dipping her fries in mayo instead of ketchup? Gross, but that’s between her and her own God. Oh, Shane likes dipping his penis in more than one person and is super upfront and honest about it? Same deal, totally his call.

Good sex can certainly be chicken soup for the soul, but it’s easy to be skeptical when hearing sex prescribed as a cure for psychological trauma (although a good orgasm can feel like Ativan). Aaron’s solo presentation discussed how edge play, more extreme role-playing such as rape fantasy, can actually be healing.

While edgier sexual appetites have a history of being pathologized (and even homosexuality wasn’t removed from the DSM until 1973), Aaron stated that studies have failed to find a link between mental illness and BDSM, so a sadist in the sheets may not necessarily be a sadist in the streets. Not only did Aaron put forth that it’s okay and healthy to enjoy edge play, but he spoke of its healing potential, sharing that sexual assault survivors he has worked with as a therapist found healing and enjoyment through rape fantasies with partners they trusted. It’s an extremely delicate and tricky subject, though—as a sexual assault survivor myself, while totally supportive of rape fantasy role-playing, I believe such activities have to absolutely be done with someone you trust and can run a risk of re-traumatizing, something that Aaron confirmed in his presentation.

There Is Overlap Between Poly And Kink

While not everyone that’s kinky is poly and not everyone that’s poly is kinky, there is overlap between the two worlds, which would explain why some of my poly friends own very expensive-looking cages yet are not dog owners. The two organizers of the event, Aaron and Dulcinea Pitagora, a “kink-friendly” therapist, gave a presentation on the intersection between kink and poly. They raised the chicken or the egg question to those who practice both, which came first, the kink or the poly? Both communities face similar struggles, such as pathologization and stereotypes (most common: if you like these things, you must be mentally ill) and also share similar central tenets, such as communication and consent (two really crucial things if you have multiple partners or are using a bullwhip).

Poly People Deal With Breakups Too

While we tend to associate breakups with monogamy, as Rosalyn Dischiavo pointed out, the addition or loss of a poly partner to an existing structure, can be difficult to navigate as well. Many people (I’ve been guilty) tend to view poly people as either sex-crazed freaks or enlightened beings, incapable of or above breakup tears and binge-watching Shonda Rhimes' shows to get through a relationship loss. When a poly person ends one of their relationships, it can be just as painful as a monogamous breakup, and perhaps even more complicated, as their emotions can affect their other partners.

While Dischiavo reminded us that breakups can suck, Dr. Zhana Vrangalova’s presentation, “Myths and Realities of Consensual Non-Monogamy,” worked to dispel myths about those who practice it and share some facts, such as poly people do tend to be less jealous. Some other things you may expect: They also tend to be less religious and more open to new experiences.

Poly Does Not Mean More STIs

While you may have guessed that the polyamorous aren’t always big churchgoers or jealous green-eyed monsters, Dr. Vrangalova also shared some stats you may not have expected, such as how those in poly relationships experience no difference in STI rates, dispelling the notion that polyamory leads to more sexually transmitted disease. In theory, more partners increase your risk of contracting an STI, but non-monogamists are usually pretty good about safer sex practices, and when infidelity in “monogamous” relationships occurs, cheaters can be less likely to use condoms. Not to mention, those in monogamous relationships have a tendency to stop using condoms too quickly, before they’ve both gotten tested.

Age Play Is Being Used To Treat Pedophiles

Yes, you read that right! The final and most controversial presentation of the day was David Ortmann, LCSW’s “Age Play: Eros, Practicality, and Walking the Edge.” Age play is a form of consensual role-playing where you pretend to be a different age from your own. Babies, teenagers, and grandmas are all fair game. A tame version of this is dressing up like a school girl and having your partner spank you; adult babies are another example. Ortmann’s presentation focused predominantly on how he has seen age play work to help pedophiles (as well as hebephiles who are attracted to pubescents and ephebophiles who are attracted to post-pubescent adolescents) not act on harmful impulses—rather than molest anyone, through age play, they can pretend to do so consensually with another adult. He calls this group of people “AEAOs, or Alternative Erotic Age Orientation,” and has said he has seen success in helping them not act upon desires by engaging in age play with legal adults.

“I use age play as a conscious sexual intervention with the AEAOs I have worked with in my private practice over the years with great success of keeping them from putting themselves in harm’s way by viewing illegal material, and avoid putting themselves and a young person in harm’s way by acting out with a child,” Ortmann wrote to NYLON in an email. Obviously, this is a controversial topic, but Ortmann sees it as his job to help them. In some states, like in California, where Ortmann practices (along with New York), mandated reporting laws make it difficult for such individuals to seek treatment without being reported to authorities. “I became a social worker, and later a sex therapist and psychotherapist, to work with the people society had thrown away. At first, it was the homeless and chronically mentally ill. Now, it’s the sexual outsiders—the maligned, the feared, and the brutally misunderstood. It's my job. I take it very seriously, and I am going to continue to hold a safe space for them to come to,” he added.

While academia can be hard to digest, research and conferences may be just the pill the alternative sex community needs to fight the stigma surrounding alternative (consensual) sexual interests. “I think that research and academic discussion around sexuality are very important because it changes people’s minds and policies,” said Aaron.

The countdown has already started for next year’s Alt Sex Conference, and this time, I’m told to expect furries.