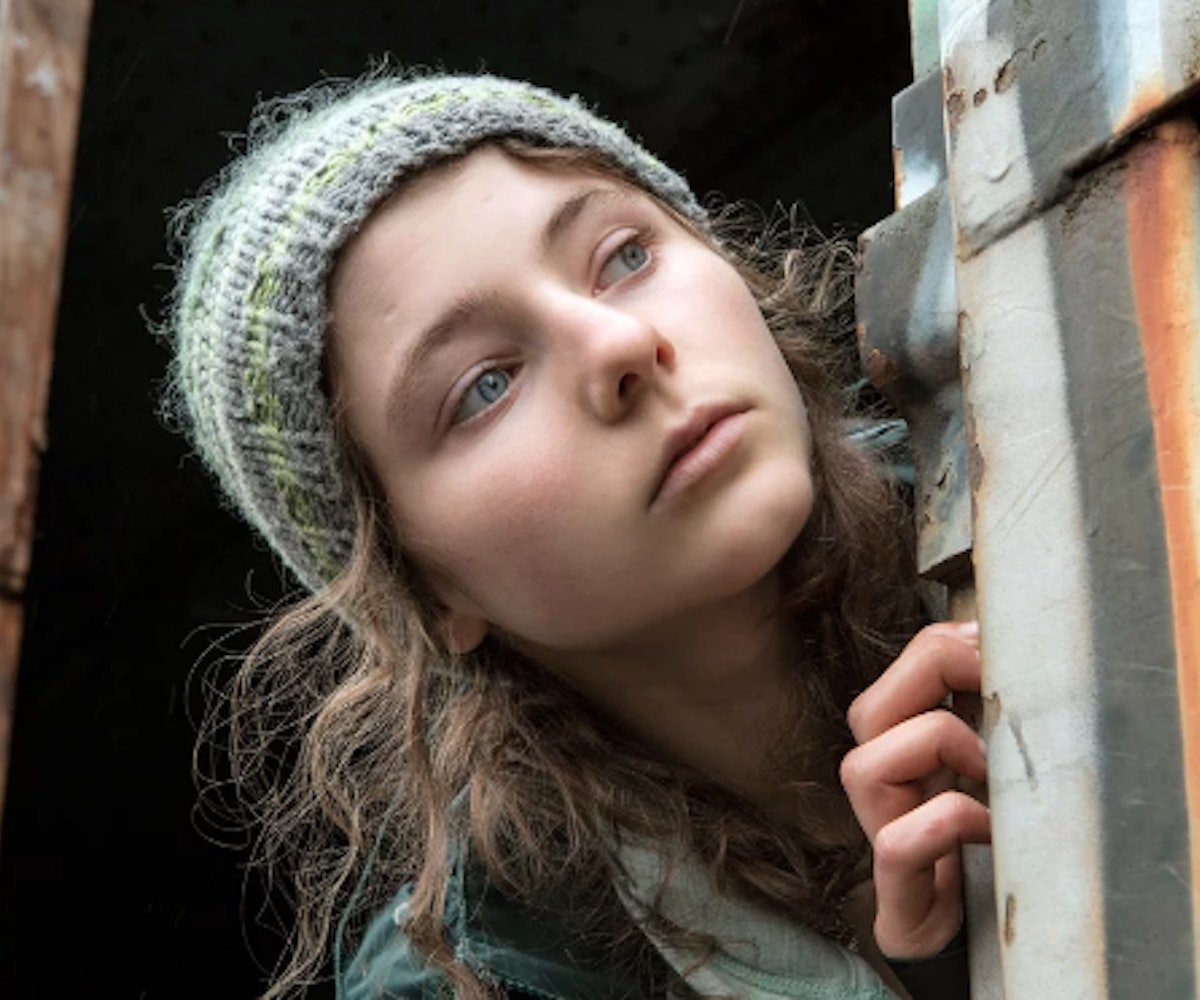 For any young actor working today, there are a mere handful of stars whose careers are universally worthy of emulation, and among them is Jennifer Lawrence, who has earned widespread critical and commercial acclaim following her breakout role in Debra Granik's Appalachian-noir indie marvel Winter's Bone.

Granik is back with another film about "life on the fringes of America," Leave No Trace, and as it stars another young actor, Thomasin McKenzie, whose quietly devastating performance signals a bright future, comparisons are already being made between McKenzie and Lawrence—and McKenzie is well too aware of them, politely smiling at the mention of Lawrence's name, but refusing to engage much in what is, admittedly, a pretty superficial comparison.

And, in fact, resting too much on that connection would be missing the myriad distinctions between both the films (which, other than taking place in cinematically underrepresented parts of America and featuring preternaturally self-reliant teenage girls, have little in common, narratively) and the actors. The strength, intelligence, and curiosity with which McKenzie imbues her Leave No Trace character, Tom, who is leading a life on the margins with her PTSD-suffering veteran father, played by Ben Foster, is all her own.

Below, I speak with McKenzie about her experience making this film, the importance of disconnecting while out in nature, and her unorthodox audition process.

Leave No Trace is such a quiet and meditative movie, though there is a real tension running throughout the film...

Yeah, it's, like, gently devastating and it's quiet, and nothing massive happens in it. It's just kind of a gradual build, I think.

I live in New Zealand, so I obviously couldn't just fly over to New York—because Debra lives in New York—and do the audition. So we did a self-tape, and then I Skyped with Debra, and we talked about it, and then she asked me to re-film the scenes and also do some improv scenes. So, I re-did the scenes and did some improv, and in one of the improv scenes, with a rabbit, the rabbit peed all over me. And I exploded, it was intense. And then, like six months later, I got a Skype with Debra again, and I thought it was just a kind of catch-up Skype just to see if I was the right age still or if I still looked right. And then she starting saying like, "When I see you," and, "When we meet, we're gonna need to get you some big jackets 'cause it's cold in Portland," and stuff. And she was saying all these things, and I was like, What? Do I have the role? What is going on? I was thinking all this stuff in my head, and then the next morning my agents call, and they were like, "Yeah! You got the role. You got the role of a lifetime." A couple of years earlier, I had watched Winter's Bone, which I loved, so that was the first time I was aware of Debra and her work.

There have been a lot of parallels drawn between Winter's Bone and Leave No Trace, which is not a bad thing, because Winter's Bone is also a great movie and Jennifer Lawrence, obviously, a wonderful actress. How did you prepare for this role?

I did quite a lot of research beforehand. In New Zealand, I started writing a journal, because Tom kept a journal; she was really into mushrooms, so I drew pictures of mushrooms and I researched birds and I drew human anatomy, and I just kind of wrote stuff down that I found interesting. I also went to a park in New Zealand, in Wellington, called Adrenalin Forest, where I got to climb trees and do like obstacles in trees and where I walked in the bush. And I didn't know how to do an American accent, so [I got] an American accent coach. So I did quite a bit of stuff in New Zealand to prepare myself for the role. Then I got to Portland. [While there,] I did wilderness training and got to establish a relationship with Ben [Foster], and we got comfortable in the camp that we filmed in and learned about living off-grid. I learned about bees. I got to work with a beekeeper.

I literally have a note to ask you about that, and it's just the word "bees" underlined.

[Laughs] That was one of my favorite parts of the whole filming. I got to hold bees in my bare hands, and it was just incredible, and I loved it. The research that went into that, I think, really made a difference.

There's a real ease of movement and communication between you and Ben, and the other actors, that adds to the naturalistic feel.

Yeah. Also, another thing that aided in the realness of the film was that Debra was really keen on casting real people. Like the guy that was in at the beginning of the film, that Ben sells his pills to... he was a veteran himself and struggling with, you know, just being a veteran, because it's such an intense thing, and with PTSD and everything. So he was a real guy, and Debra cast real tractor drivers and real girls that had actually gone through the whole foster system and a real beekeeper. She just casts real people, which again, it just created this kind of environment and this atmosphere and you could trust that it was a real story.

How was it being outside so much? Were you always very outdoorsy?

I love the outdoors—like, a lot. I live in New Zealand. I'm surrounded by bush, and there's a specific walk that's right by my house that I go on a lot. It's kind of, for me, become a tradition to go on that walk before I go away to, like, film or something. I went on that walk before I came here. I went on that walk before I filmed Leave No Trace. I like it. I love tramping, and I love the native New Zealand environment and the native birds and everything. So yeah, I am an outdoorsy person, and I love being connected with nature because it's something that's quite hard for people to do these days, especially if you live in the city, to just go on a walk in the bush.

Well, and there's being outdoorsy and there's actually living outdoors and off the grid, like Tom and her father. How do you think that lifestyle affected her?

It really shaped Tom to be the kind of person that she was. She was observant, really smart, intelligent, and just such a lovely person. It sort of really shaped her, and I think it's just so important these days that people just to take the time to go on a tramp or hike and just be with nature rather than just being in the city. It is really important.

Lots of the time now, when people go out in nature, it can seem like half of the reason they're there is to get the good Instagram shot. It's really really hard to disconnect.

Yeah, over the Christmas holidays, I went on a trip. At the top of the lookout at the top of the hike, the top of the hill we hiked up to, there was a lady. She'd spent half an hour taking all of these Instagram photos standing at this rock looking over the view. After taking 30 photos, she'd go back to her boyfriend and look over the photos and then she would go take some more. The only reason she had gone on that hike was just for the photos.

Yeah, that happens everywhere. Like how some people will go to a restaurant just because it's very Instagram-friendly.

Yes, just because of the aesthetic.

We all succumb to it for sure, that kind of addiction.

You know it's bad for you, but you keep on doing it.

You come from an acting family. Did you always know you wanted to act?

I really did not want to be an actress when I was younger. Because I come from an acting family, I kind of wanted to stray away from that and be my own individual and do my own thing. I did become an actress, obviously, and I love it. I'm the happiest when I do do it. But yeah, I definitely did not always want to be an actress. My brother, he's started out acting, but now he is really into politics. He's an intern in the New Zealand government; in the Beehive, we call it, which is kind of like the White House, I guess. It’s the government building. He's incredibly, incredibly smart. I think I wanted to do what he was doing. I kind of strayed away from it and did my own thing.

It's definitely understandable that you wanted to resist the family business.

My family made it really clear to me and to my siblings that it’s a hard job and it’s not fame and fortune. It's long hours and a lot of learning lines and staying out late. And risking your identity, because people see actors quite differently. If you play a bad character or a bad person, obviously some people aren’t going to like you. So, it's a hard job. I definitely wasn’t forced into doing it.

Leave No Trace is in theaters now