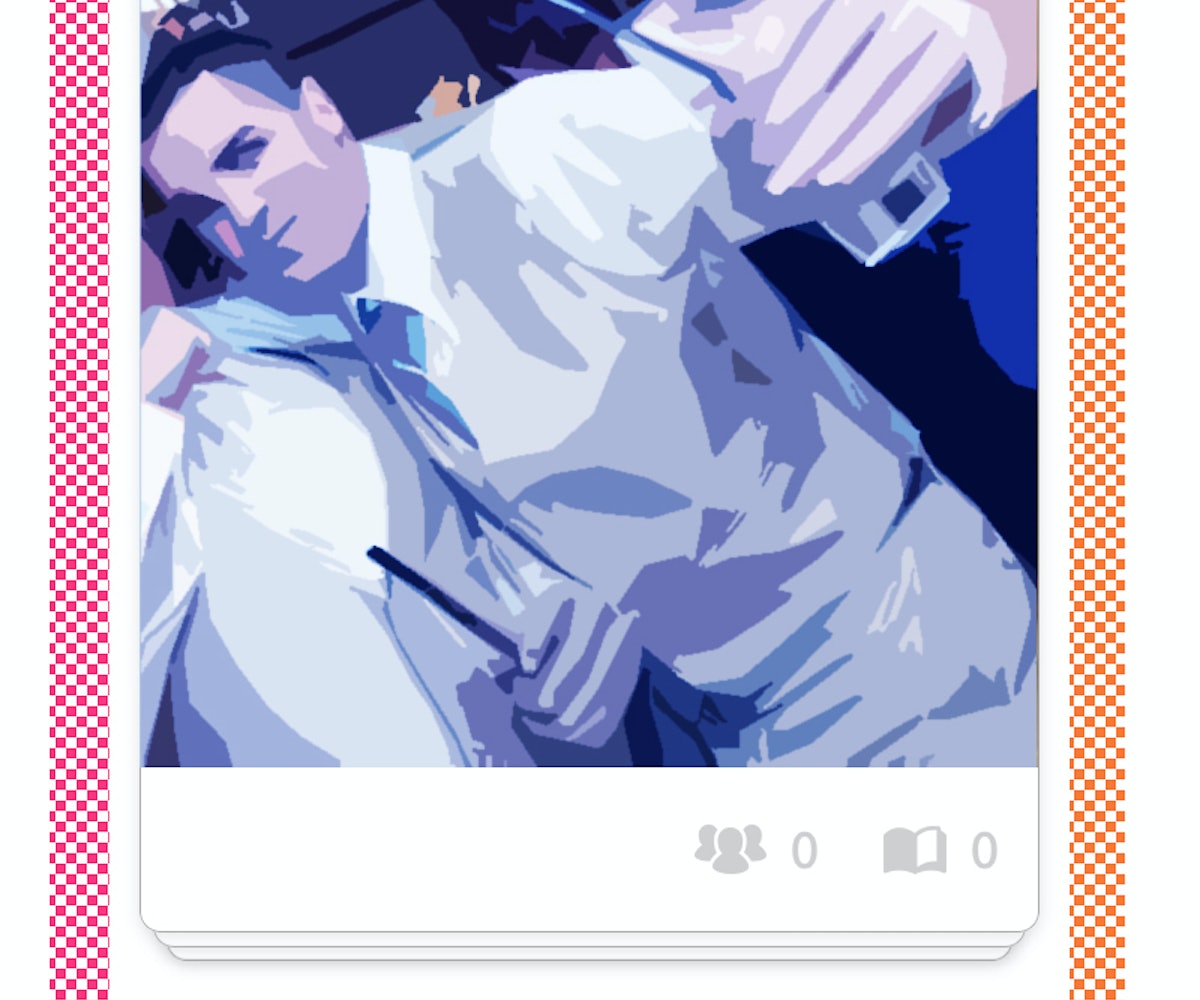 Congratulations! Most of you guys are totally nailing it. Lately, however, I’ve had a few of you ask me what kinds of photos you can add to your profile to help you really stand out.

Well, look no further, gents. The pictures below are shining examples of the quickest route to Ladytown, USA. We've seen them all hundreds of times before, so we want to let you know: It is really working for us. Here's why:

I like a guy who can keep a girl guessing!

For example, are you the man in the foreground who’s throwing me a righteous thumbs up? Are you that bald guy towards the center with a very tiny head? Or are you, in fact, that delicious margarita in the left-hand corner?

I really do hope you’re the margarita. The truth is: There are so many margaritas in this picture it’d be hard to know which margarita you are for sure. I don’t mean to be rude; it’s just that margaritas tend to look alike.

So I’d say when we meet, just wear an ice cube, add an extra straw and lime, and maybe bring the salty rim? So I’ll know it’s you.

Cool! See you at Grey Dogs (the one in Chelsea) at 2pm (after your kickball game).

This one is super simple: just be a golden retriever named Hero.

Why? You being a dog resolves a ton of potential relationship issues.

I wanna move to LA, but you’re super attached to the Tompkins Square dog park. Doesn’t matter, you’re coming with me... because you’re a dog.

I wanna stay in and watch “Black Mirror,” but you want to play a never-ending game of fetch. Doesn’t matter, we’re laying on couch… because you’re my dog.

I wanna dress you in a suit jacket and tie so I can Instagram it; however, you do not want to wear a suit jacket nor a tie nor have your picture taken.

Doesn’t matter, you gotta do it anyway... because you’re the dog.

Second rule of moments: Give me all the moments! Third rule of moments: I want an endless flood of all your moments to just wash over me like a warm, warm shower. A photo of a muffin? It’s like I’m right there, eating that muffin with you. A picture of a disco ball with the words “let’s get dancing!” scribbled over it in children’s handwriting? I want to be dancing at that fun disco-ball party with you.

“Fire, wine, and Netflix?” Why, I would like in, sir! Yes, three hundred other girls are receiving that exact same picture, but deep down, I know you meant it just for me.

I think it was the great Jean-Paul Sartre who reminded us, “This moment. It is round, it hangs in empty space like a little diamond; I am eternal.”

4. Climb your own mountain.

You made it, Jerry! If you’re not worthy of the title, “King of the World,” then I don’t know who is.

I know it was a tough climb up to the local nature preserve. An even tougher climb, still, up that large hill. Perhaps the toughest climb yet was that rock on which you currently stand.

Thank goodness you had the foresight to buy those handy climbing gloves from Amazon.

With you by my side, what can’t we climb, Jerry? A three-story walk-up with a very narrow staircase? Check. That super-long escalator at the F train Lexington Avenue stop? Check. Hell, if we felt crazy we could take one of those “Easy Climber” chairs up somewhere. They’re meant for one, but I think you’d have the fortitude to climb aboard with me.

So breathe in that fresh mountain air, Jerry. You deserve it.

Drinking lets me know that you’re a “Fun Time™.” Look at those moves on the dance floor, Dan! You’ve got “Future Cool Dad” written all over you.

I can see it now: You propose at the Brooklyn Botanical Gardens–but not before asking my parents for my hand. The wedding is extravagant yet distinctly “us”: I opt for a retro veil; you perform a choreographed dance to “My Pony” with the groomsmen. Our first child comes a year and a half later. It’s a little bumpy at first: You want to raise her Catholic, while I insist that she get Bat Mitzvah-ed, but we come to an inter-faith understanding. Years pass. Our sex life dwindles. I fantasize about my recently separated coworker, Mike. You start an illicit affair with our college-aged babysitter. She gets pregnant. You move out.

But through it all, you can’t say we didn’t have FUN.

6. Remember, Tinder is a great place for politics!

See! This is a great picture because it lets me know where you stand in terms of our current political climate. Let’s break it down.

You, Lenny, are a pillar of upstanding, conservative Republican values. You, Lenny, are doing your duty. And what is that duty? To expel the liberal extremism that we can all agree is ruining this great nation.

Either that or you’re birthing a bunch of donkeys.

Okay, so it’s a little unclear. But what is clear is that you, Lenny, are a true American patriot. So thank you. I get it and I applaud it.

As a side-note: Lenny is what I like to call a “Hometown Husband.” The easiest way to land yours is by going home for the holidays, drinking an obscene amount of Fireball alone in your childhood bed, and Tindering for as long as you can take it. Collect them all and trade with your friends! Kinda like baseball cards–but featuring incredibly weird strangers you would never actually date.

Wow, Tim. You really are the “Tiger Whisperer.” Not only did you manage to find a way into the cage, you lulled this tiger to sleep and turned it into your own personal futon.

What is your secret, Tim? What sweet nothings did you whisper into the ear of this tiger?

Was it a smattering of sensual French phrases? A short selection from Pride and Prejudice? Perhaps an extensive description of what your future half-human-half-tiger children would look like? Either way, this photo lets me know that you, Tim, have the touch.

For I am that tiger: a wild, independent woman looking to be tamed by a strong, sensitive man in flip-flops and a half-sleeve. Rescue me from the cage that is the all-consuming malaise of singlehood! Wake up next to me every morning, fill my water bowl, scratch me in that spot I like between my ears, and be my man.

‘Til death to us part as long as we both shall live.

My favorite part of these is the bio that always states: THIS IS NOT MY BABY!

However, this does beg the question: Whose baby is it? You know what—it doesn’t even matter. The point is that you found one and for that, I AM IMPRESSED. Babies are super difficult to come by, as most folks are pretty attached to theirs. And yet you found a way snatch one from an unsuspecting mother, set up a well-lit selfie, and somehow remain undetected by the police. It’s the American spirit at its best: A man has a dream, goes after it, and returns victorious.

Also, let’s be real. Pregnancy seems exhausting. If you can just manage to bring me a baby from the same place you got this baby, it’d be a real timesaver. Thankskloveyoubye.

Is it “listening ” to giant stacks of cash like you’re talking on two cellphones?

Is it sporting a “Just Do It” t-shirt fashioned out of bones?

Wanna set the location of your profile photo in a giant strip mall (in front of what looks to be a personal injury law office)? I’m not going to stop you!

The point is that your photos should honor your most authentic self.

As a side note: Yes! You guessed it! The gentleman pictured above is from my hometown, of Tampa, FL. You guys, I have so many “Hometown Husbands” at this point, I can barely keep track of them all!

At the end of the day, men, you just gotta do you. There’s a whole lot of weirdos in the world, and thanks to Tinder, it’s making it a whole lot easier for you to find yours. Happy Hunting!