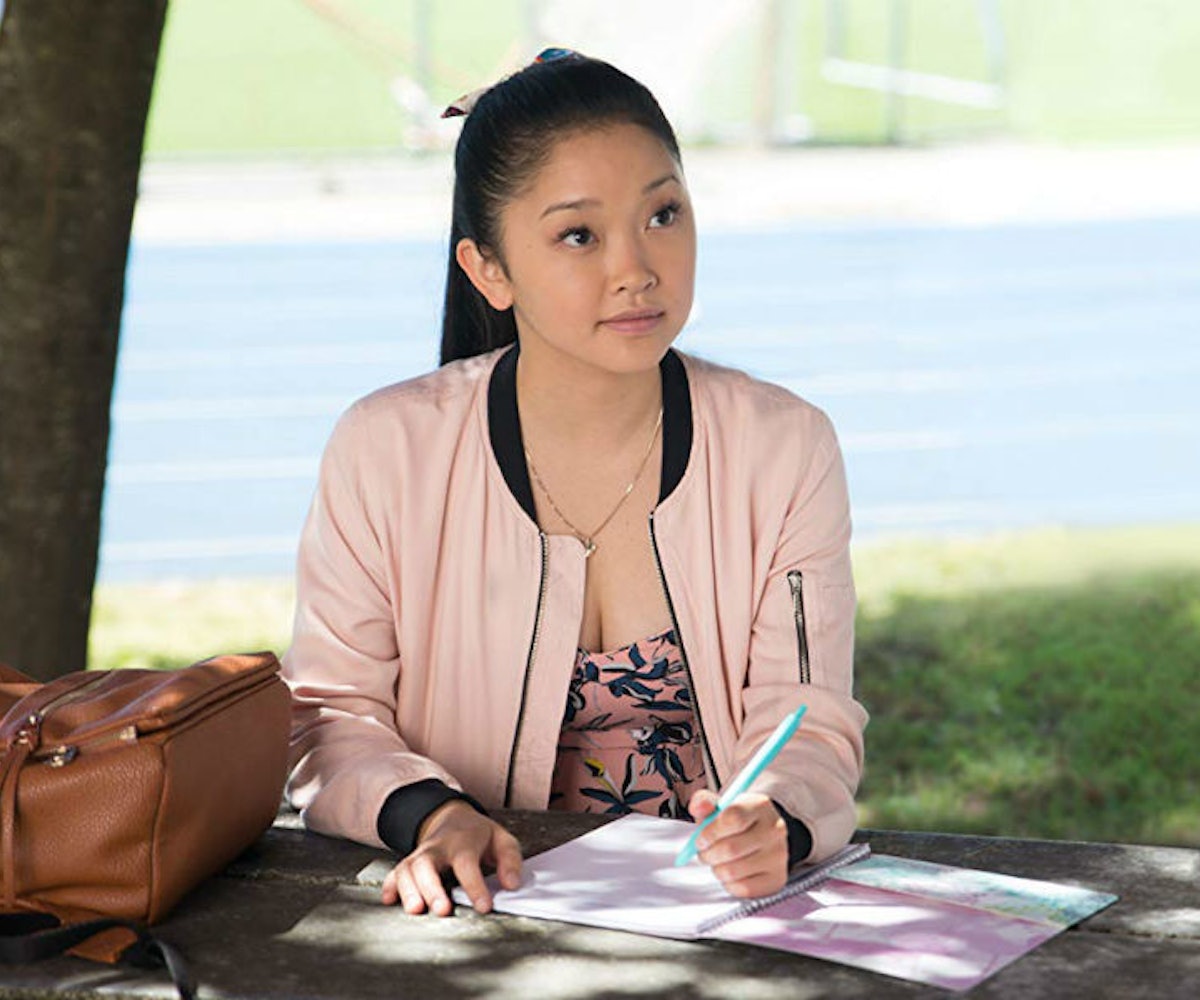 In a way, it’s appropriate that, when I chat with costume designer Rafaella Rabinovich on the phone, she’s in the middle of a chaotic Aritzia warehouse sale in British Columbia, Canada. She’s there to shop, but also to pick up items for an upcoming project. She’s always on the hunt for the perfect dress, the perfect necklace, the perfect pair of jeans to bring a character to life. The hustle, truly, never stops.

For Rabinovich's most recent project, To All The Boys I’ve Loved Before, her search brought her a little bit of everywhere. Forever 21, H&M, and ModCloth were the main brands she sourced from, but she also did a lot of vintage shopping, brought stuff from past shows, and borrowed from family members. She got a necklace from a retail store she used to frequent when she lived in the U.K., and other accessories from her dad’s home country of Argentina. And then there’s the inspiration, which spans from K-Pop to the ‘90s to Jaden Smith and this yellow jacket he once wore on the red carpet. “I am a person who gets inspired just by walking down the street,” Rabinovich tells us.

That’s a good thing because the characters in the Netflix film aren’t one-dimensional. They all come with their own flair and personality, especially when it comes to fashion, making it possible for viewers to see themselves in more than one character. Rabinovich, for example, says that she “lives in the silhouettes of Lara Jean but with the textures and patterns of Kitty, and I accessorize like Chris.” Me? I relate to the minimalism of Margot, the prints of Kitty, and the romantic detailing of Lara Jean.

For anyone hoping to emulate the style of their favorite character, Rabinovich advises that, instead of finding the same bomber jacket or black hat they might’ve worn, figure out what it is you love about their style, and then try to find yourself within that. “When I watch a show, sometimes what I love about it is isn’t necessarily a dress, but the aesthetic,” she says. “And there's a variety of different ways to create an aesthetic without committing to trying to cosplay something. I support anyone expressing themselves however they want to and explore and grow because it's a big layer of who we are, especially when we're young.”

Ahead, we chat with Rabinovich about some of our favorite pieces from the film and the outfits with the most interesting backstories.

Now that the film has been out for a couple of weeks, how do you feel about people referring to Lara Jean as a fashion icon?

I'm very humbled and grateful. It's great to see that all of our hard work—because it does take a village—is coming to fruition in such a positive way and that people can identify with the story. It's cool, it's great. It feels good.

The series is so interesting because high school is very much a time where people are still figuring out who they are, but the Covey girls all have a very distinct sense of self, even from a young age. With that in mind, how did you approach dressing them?

I was familiar with the book from before reading the script. I read it a couple of years before on a flight, and I loved it, and I thought it was super-cute. One of the great things about reading a book is that you use your own imagination and you have this idea about how certain things are going to look. So, when I got to read the script, I really got to hone creatively into what does that mean and how to differentiate the girls.

Were there a lot of descriptions of what the characters would be wearing in the script?

Not specifically. There was definitely the mention of a black dress when she's going to the party or that she has a crown braid when she's here or there. There were those kinds of visual descriptions that would come up, but there was no, like, "she's wearing a striped shirt with a jumpsuit."

Someone online pointed out that Lara Jean’s outfits reflect what she’s going through in each scene. Was that something you were thinking about?

Absolutely, there's a definite arc that really shows her opening up. And choices of colors and cuts and textures and the way those things fit, they represent certain things that are going on in the script for each character. She goes through an emotional roller coaster, so it does show in the costumes to an extent; in a very mild way, but it's definitely there.

Kitty’s "feminist" necklace is getting a lot of love online. What's the story behind that?

Originally, when reading the script and talking to the producers, we were discussing the fact that she was going to be the girl everyone wants to grow up to be, even though she's the youngest. And she's very confident and free in her style and in her being, so it felt right. Originally we thought, Oh, maybe she should have a feminist T-shirt. But then we were like, you know what, we want it to be something that's going to carry through for the entire film. In the beginning, I wasn't even necessarily like it has to be feminist. I was like, Oh, maybe girl power, and she does end up wearing a shirt with the words on it in one scene also for that reason.

So, I went looking for something that's going to feel right and girly and relevant and ties to the story and to the sisters. It made sense for statement jewelry to be their hero jewelry, which is what we like to call the pieces they wear quite often, and I found this really beautiful necklace on Rock N Rose. I went online, and I found it, and it was perfect.

Speaking of necklaces, the heart one that Lara Jean wears… In the second book, Peter gives her a similar vintage piece from his mom's antique store. Was that meant to be foreshadowing in some way?

Absolutely, that's exactly what that was. And I hope for the production company and I hope for everybody that there's going to be a sequel, but there was a part of me that was like, if there's not going to be a sequel, I just want to bring it in. And I had that necklace for a really, really long time, so it was one of those gems that I was waiting to put in its right place.

There's also a very beautiful play with all of the necklaces. Margot wears the key necklace when you first see her, and that's a bit of a play of her being the key to Lara Jean's heart. And then when Margot leaves in the airport, she wears an Aries necklace, which kind of represents freedom. And when she comes back, she comes back with a compass necklace… We wanted to make sure there was a lot of symbolism behind the pieces that the viewers end up seeing.

What outfit would you say has the most interesting backstory?

I have so many stories I could tell you [laughs]. Let's see, well, the pink toggle jacket that Lara Jean wears and everyone loves is actually borrowed from my sister. I can tell you something interesting about almost every look because there was so much thought that was put into every small detail. The dress that Margot wears in the beginning was originally meant for Lara Jean, but it worked so beautifully on Janel [Parish], and we loved it on her.

One of my favorite looks of [Lara Jean’s] is the one from Christmas Eve where she wears that thin Easter-colored H&M sweater and she has skinny denim with some rips in them. She has a pink cardigan on top and, on her head, you have this small black ribbon that we pulled from my kit. And the reason why I was like, We should put a black ribbon on her, is because it connects her with the black ripped denim. But at the same time, the beautiful thing about that moment is that she's really heartbroken, it's Christmas Eve, there's something to the Easter colors that feels a little hopeful, but at the same time it's balanced out with the black.

The dress Lara Jean wears in the beginning scene is so beautiful, and so different from anything else we see in the film. What was the search like for that?

We got it from the Shaw Theatre in Toronto, and it definitely wasn't a short search. There were a lot of elements that went into it, like, originally, we were thinking that maybe we would have it in more of a pastel-like color. And, as we kept going, we kind of realized that red would work really beautifully; It's the color of love, and with the greenery in the back, and Josh wearing lighter colors, it made more sense.

There’s one scene where Peter comes to visit Lara Jean after the ski trip, and Josh comes up to the both of them wearing a hoodie. Did you take the "Bon Iver wannabe" line Peter throws out into account when dressing Josh for that scene?

[Laughs] Yeah, I took that into account when dressing him. [The hoodie] wasn't something that was specifically in the script, but it was also just something that worked well for Israel [Broussard]... with him, we just molded the story of Josh to him in a way that works beautifully on him.

And was there a conversation around whether he would have his hood up or down?

I would imagine, just from knowing Israel and working with him and being that he's such a collaborator and being so good at doing what he does, that it must've just been a moment of, Oh, this feels right. Like, This feels like something that would happen, and it's a way of protecting myself from the situation. And, in a sense, we all use different elements—whether it's makeup, hair, or wardrobe—to express ourselves, and it's also something that we use when we feel vulnerable.

NEXT UP
fashion
How ‘Spice World’'s Costume Designer Nailed The ‘Scooby-Doo on Acid’ Look
Fashion
Olivia Rodrigo Wore A Sheer Slip Dress To The 2023 Grammys
Fashion
Apple Martin Is A Chanel Girl Now
Culture
The Cutest Couples At The 2023 Grammys
Style + Culture, delivered straight to your inbox.