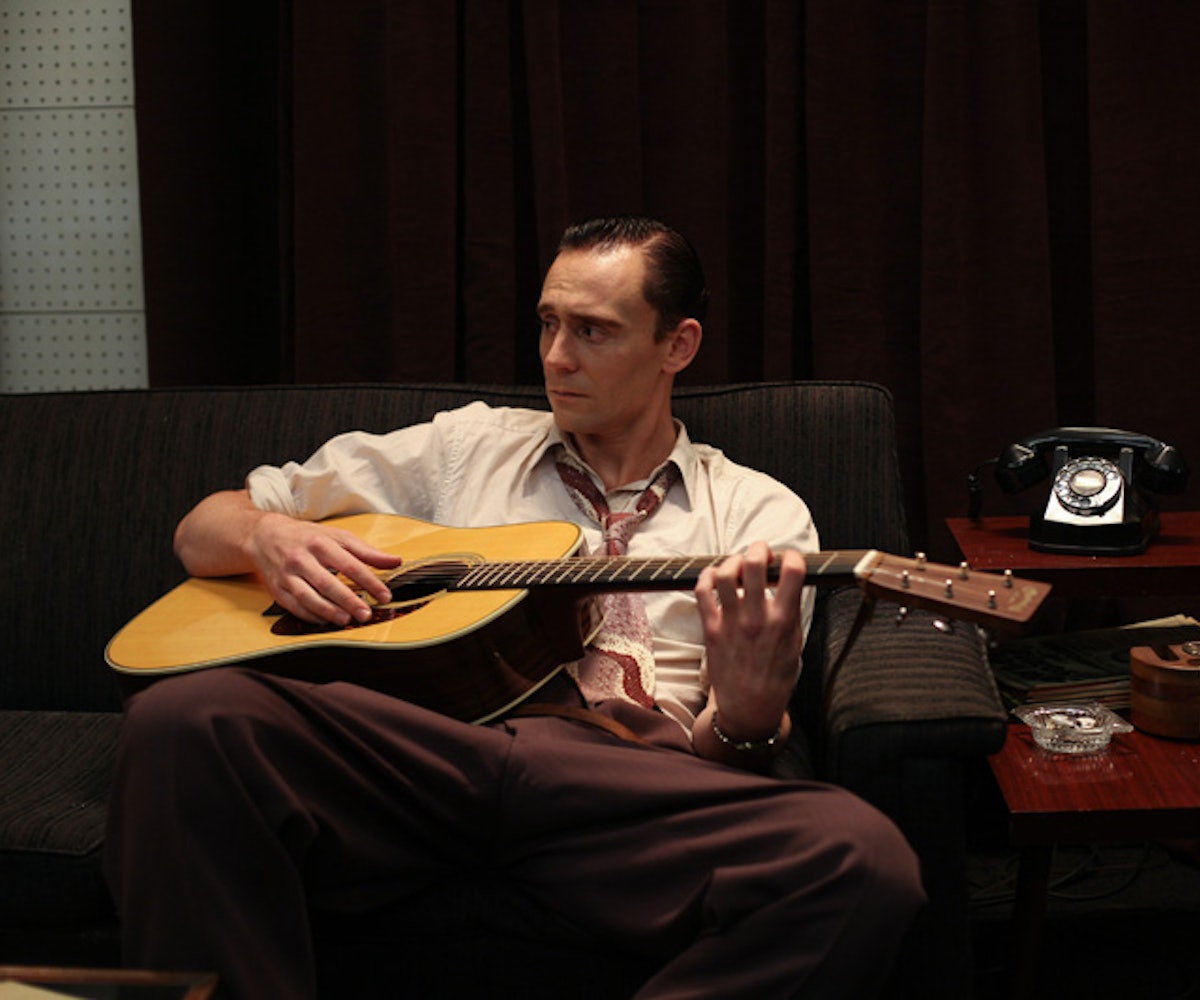 When it was announced that Tom Hiddleston had been tapped to play Hank Williams in Marc Abraham's forthcoming biopic I Saw the Light, out March 25, certain members of the country legend’s family weren't having it, particularly Hank Williams III, who wrote on Facebook that he'd much prefer seeing Matthew McConaughey play his late grandfather. The Williams clan's frustration was justified, at first. Hiddleston, on first glance, is a posh, Eton-educated Brit, and a whole six years older than Williams was at the time of his death. But more importantly, Hiddleston isn’t a Southerner, so how could he possibly understand the sorrow and the pain that are so deeply embedded in Williams' most iconic songs?

Well, as it turns out, you don't need to be from any one place to get what Williams was singing about. No one understands that better than Hiddleston, who completely lost himself in what may just be the performance of a lifetime. We caught up to Hiddleston at the Toronto International Film Festival, where the actor discussed why so many musicians fall victim to substance abuse, his time with Eddie Redmayne at Eton College, and how he managed to pull off the most difficult role of his career.

When you accepted the role, did you know you had an uncanny ability to sing like Hank Williams, or was there doubt?

I didn’t know I could do it. But that’s probably why I chose to do it. I’ve accepted roles before, and somewhere at the bottom of being, I have enough conviction and madness to throw my heart and soul into it because the thing about acting is, if you have sufficient belief, you can do anything.

What excited you most about the chance to play such an icon?

The power and legacy of his music, and the authenticity of it. On any level, Hank’s authenticity as an artist is incredibly inspiring. There’s something entirely naked about singing. Writers have their anonymity to hide behind, actors have characters to hide behind, but if you’re singing, it’s pure, raw, and you have to bare your soul. The reason he became such a big star is because it came from the heart of him. He wrote about his life, and people really connected with that. Whether he was talking about his loneliness in “I’m So Lonesome I Could Cry” or the mischief of being shot in the dog house, which is what "Movin On Over" is about.

Do you identify with Hank’s belief that we all have a little darkness in us?

I do. I actually wrote that line in the film. It came out of a conversation Marc and I had about the power of the dark side in cinema, in music. I remember a conversation I had with Anthony Hopkins when we were making the first Thor film. He was telling me how people stop him on the street and ask him about just one man [Hannibal Lecter]. He’s played warriors, and princes, and kings, and poets, and you know and I know who that man is. We don’t even have to say his name. He said people want their lives to be full of happiness, friendship, laughter, and joy, but there is something very compelling about someone who can lean into the darkness.

Why do you think so many artists fall victim to substance abuse?

Substance abuse is something I think you’re born with. I’m not addicted to anything but coffee, which I’m grateful for, but for artists, there’s something innately vulnerable about self-expression and feeling compelled to say ‘This is how I feel, and I hope you feel it too.’ It’s both courageous and vulnerable. The artists that you and I love, whether they’re musicians or actors, they’re really living at the sharp end of that. Marc and I talked all about what it is about certain individuals who don’t seem to have a safety net. They’re on the edge of the cliff looking down at the rocks, and they’re not frightened by the fall. And they get lionized, they become icons.

Does it make you sad to think about all the young artists that we’ve lost to addiction?

It does. I think about Amy Winehouse and Kurt Cobain. If they were still here, culture would be different. That’s what I found so sad in playing Hank. He couldn’t see that there were so many people who loved him. Maybe it’s retroactively imposing a modern psychological structure on him, but if only he could have somehow looked around and asked for help. Maybe somebody could’ve said "Hey Hank, take it easy. You’re going to be alright. Just slow down." His life had such velocity, he didn’t even have time to think or room to breathe. Before he knew it, he was caught in a cycle of substance abuse, alcoholism, and addiction to prescription drugs. But he was a genius.

You and Eddie Redmayne studied at Eton and were quite prolific stage actors. What is it about that school that breeds leading men?

Do you miss your time on stage?

There’s a line in I Saw the Light, that I really relate to. Hanks says, “I sure hate those auditions, Mr. Collins.” I’m not great at auditioning. I never was. I never understood why, but it’s like I hold something back. I try not to. It’s my body’s way of saying ‘You don’t get to try before you buy. You either take me home or you don’t.’ I understood Hank’s love of performing. It’s a film about performance, and that magic chemistry you can have on the stage, live with an audience—it’s a two-way street.