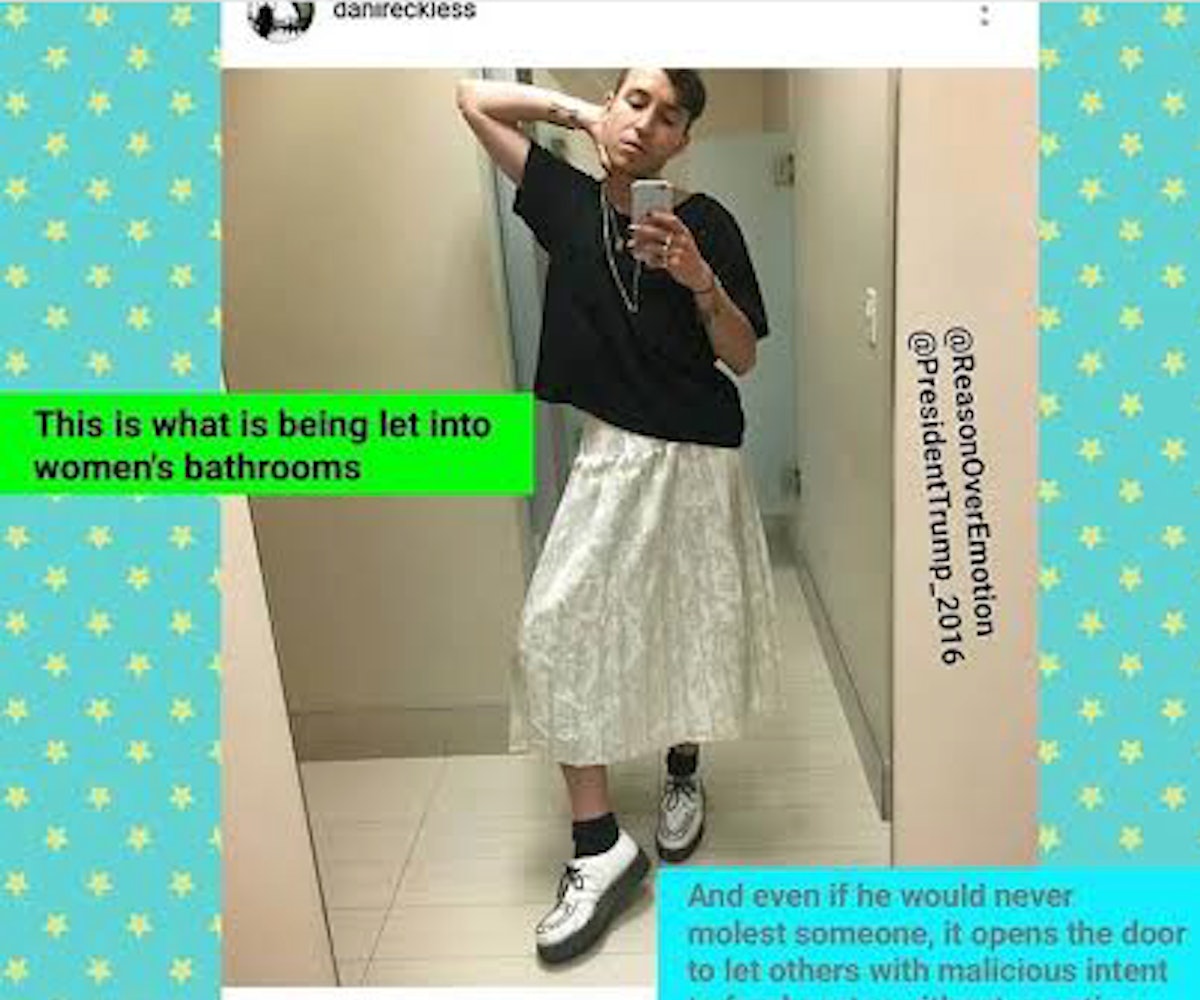 A white, embroidered, floor-length skirt happened to hang from my waist the day #BoycottTarget first announced itself as a Facebook trending topic. The Instagram hashtag offered a variety of transphobic rebukes to the superstore's initiative to allow "transgender team members and guests to use the restroom or fitting room facility that corresponds with their gender identity."

“Just because a man may ‘feel’ like a woman doesn’t mean he should be able to share a bathroom with my daughter, or yours.”

“JFK: wanted to put a man on the moon. Obama: Wants to put men in womens’ bathrooms."

As a human, a queer person, and someone supported by a gender-inclusive community in New York City, I felt motivated to use my position to challenge the uninformed vitriol raining upon my trans and non-binary friends. Standing before the bathroom mirror at my office, I took a selfie—black T-shirt, white skirt, white creepers, fake gold accessories, and all. Accompanying the post was the caption "Much love to the repressed #BoycottTarget."

A volley of impassioned reactions soon berated the photo. Conservative trolls and moms alike threatened to mace me and wished for Hitler to gas me. Others vehemently defended my gender identity against my attackers, posting links to Merriam-Webster's definition of "phobia." I even achieved memehood (see image above), but in a rather unsavory way. But what soon became apparent was that both my attackers and my defenders based their arguments on assumptions about me, assumptions that shed light on a population unaware of the structures through which it perceives the world.

First of all, both my haters and my fans assume that I am a trans woman because I'm wearing a skirt. The word trans does not define my experience, but my gender identity does exist in a fluid space between the masculine and the feminine. This ambiguity most evidently expresses itself through my style. Spaghetti straps, pleated skirts, and the cutest Zara booties you've ever seen share my closet with Levi's jeans and T-shirts. Herein lies a critical point: my body and what I dress it in have no essential connection. Any connection between sex and gender expression is dictated by perpetuated societal constructions.

Every article of clothing we wear carries with it the heritage of its cultural connotations. But we are not born wearing clothes. The connections made between certain body parts and certain articles of clothing are not inherent aspects of our existence on earth; so it begs the question, why does it matter so much what people wear?

Perhaps because when clothes transform into signifiers within a societal binary, they inform a population about how it should treat its constituents. In the heteronormative matrix, skirts signify female, so skirts signal where to exert domination, and to be dominated is to be emasculated, and to be emasculated is to be a woman, and to be a woman is undesirable. While skirts supposedly invite people to catcall the people that wear them, a suit, a traditionally masculine outfit, elicits respect.

Secondly, everyone assumes that I’m in the women’s bathroom when I’m actually in the men’s bathroom. Public restrooms and locker rooms are some of the heaviest gender-policed spaces in our society. Presumably, safety and comfort inspire the separation between men and women, perhaps because sex defines their power dynamic. But immediately, something comes to mind that totally compromises this safety and security. Ding ding ding: the homosexuals! If there’s such a hullabaloo about trans people in the bathroom, then why don’t the masses cry foul at the presence of gay, lesbian, and bisexual people? Surely those gay people who "pass" as straight pose an ever more insidious threat.

On a more personal level, physically approaching a public bathroom, click-clacking in my heels, skirt billowing behind me, awakens a visceral awareness of the gender roles associated with the men’s bathroom, the bathroom I have chosen thus far in my life. Is it even okay for me to enter the men’s bathroom? Is it safe? Because of my male body, it functionally makes sense for me to use it, but my gender performance does not follow suit with what was assigned to me at birth. The fault line between sex and gender tremors here in a most confusing and palpable way. For now, I walk on.