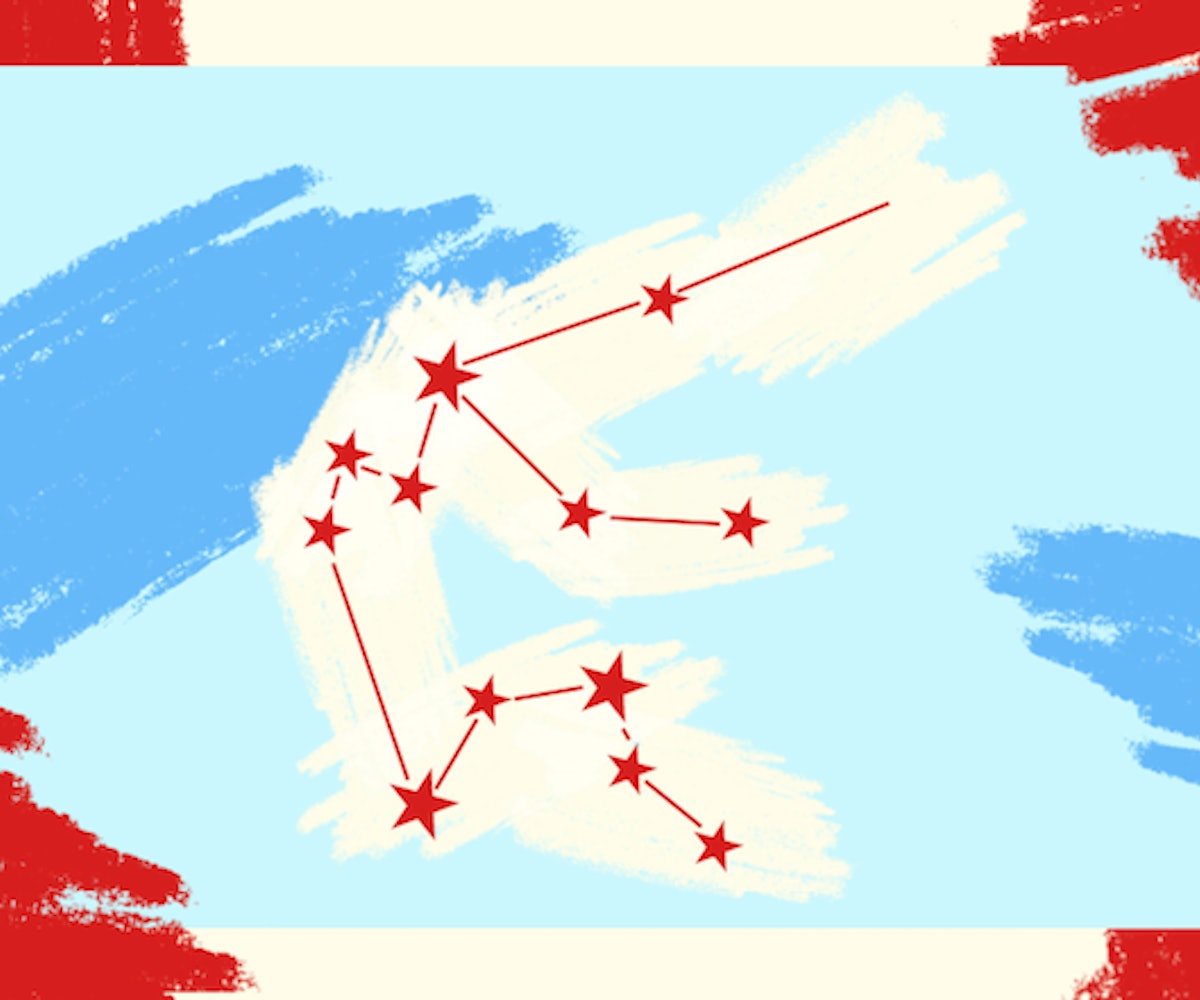 Is there someone in your life with whom you're totally obsessed, but you're also not sure they even know who you are? That person is probably an Aquarius. They are complicated, crystalline, enigmatic, all-knowing, sometimes oblivious, prophetic weirdos, and the fact that they are shrouded in mystery only makes the pleasure of getting deep into their psyches all the more rewarding. Oh, and also, an Aquarius is always hungry. But we'll get to that later.

Out of all the zodiac signs, Aquarius has always been the most confusing to me. And I don't think I'm alone in this. Though maybe this is why I pretty much always love an Aquarius. There is something about them, something inherent to their very nature that is so internally contradictory, that if you are not an Aquarius and you find yourself thinking about this contradiction too hard, it just might make your head spin around and twist off your body and go sailing out into space. And if an Aquarius saw that happening, saw your head go soaring off and into the distance, an Aquarius would just follow your flying head's trajectory, smile peacefully, and then walk away, because they've got other things to think about. They've always got other things to think about.

But let's go back for a second to their dichotomous nature. It's not only that Aquarius is the only sign to be ruled by two planets (Saturn and Uranus), but also that Aquarius is an air sign—which makes sense, because they are always thinking, thinking, thinking—yet it's personified by a Water-bearer, a twin set of waves, which speaks to the huge amounts of emotional depth and over-abundance of feelings that Aquarians carry around with them everywhere. These two things though—air and water, intellect and emotion, thought and feeling—are not natural companions; in fact, they clash. But whereas that clash could potentially cause conflict and chaos, an Aquarius is capable of carrying all that around within them and using it to, well, see into the future. Whereas the weight of the world, of knowing all there is to know, would be too much for most people (a Pisces could not handle it at all; a Cancer would be reduced to tears), an Aquarius takes all that knowledge and looks into the days ahead and figures out how to navigate them. (Okay, sometimes an Aquarius is reduced to tears, but then they taste the salt on their lips and get distracted and maybe even a little turned on, because an Aquarius is a freaky, freaky freak.)

All of these contradictions, all this mysticism, all this... freakiness, all of this makes Aquarians seem weird. Which, you know, they are legitimately weird! They say things that often make other people uncomfortable, but that is because the truth makes people squirm. An Aquarius loves to make people squirm. But they can't help that they know things and aren't afraid to let you in on their treasure trove of knowledge. An Aquarius loves to spread the truth, and is even something of an authority on it. After all, only an Aquarius could have trademarked the phrase What I Know for Sure (Oprah... hi), because only an Aquarius knows anything for sure. The rest of us might think we do sometimes (Gemini, Capricorn), but only an Aquarius really does. This is why an Aquarius is so good to have as a friend. Nobody gives better advice. Nobody will better be able to tell you when you're full of shit. Nobody will be more willing—and able—to help you manifest the future you want—because they can already see that future go down, because they are prophets.

And yet, despite all this, Aquarius can seem absent-minded. They are usually late to things. They don't like to sleep, and they don't think of sunrise as being a signal of the morning, but rather a sign that the night is just getting good. Their internal clocks just don't exist. But this does not mean they are not getting things done. The scariest thing about an Aquarius is just how much they are getting done. An Aquarius is incredibly prolific, even if the work they're doing is all happening while you are still fast asleep. I mean, compared to an Aquarius, we are, all of us, always sleeping.

All of those people have done... so much. Most of it very good! And now, look, maybe somewhere an Aquarius is doing some things that you don't really like (see: Sheeran), but you can't deny that they are getting things done. And that they are really, really good at understanding what it is that other people will like. An Aquarius is usually very popular (see: Sheeran) because they know what people will like, because they can see the future.

But what does an Aquarius like? This is the real question! Because we all like an Aquarius, and are often obsessed with them, but what do they like? The truth is that it's hard to know! Like, even though every year Oprah reveals a list of her "favorite things," are those really things that give her joy permanently? No! Of course not. Because that list is different every year. No Aquarius places real value on anything material because, as a weirdo prophet, they know that everything is ephemeral. This is why an Aquarius is someone who will tell you to get a tattoo that has no meaning attached to it, because pretending that meaning can ever achieve something resembling permanence is dumb. And yet—and yet!—an Aquarius will have the kind of tattoos that scream out SYMBOLISM!! But if you try to tell an Aquarius that, they will look you in the eye and promise that any meaning you find is all in your head. But isn't that the point? you'll think, and maybe even shout. But an Aquarius will just remind you that there is no point to anything, and then they will take a long drag on their e-cig and take off running and sliding down a snowy street with total abandon. If you tried to make an exit like that, you would have fallen. An Aquarius will never fall.

Right now I am thinking about two different Aquariuses I have known. And I am also thinking about chicken. One Aquarius and I shared a doomed love story ("doomed love," how redundant!), but before the doom, there came a point in which he told me about going home one night and being so frustrated at my absence in his home that he ate an entire chicken. With his hands! And he was a vegetarian. The other Aquarius and I share a Google doc that is all about places we want to eat chicken. What is the connection here? It is and it isn't chicken. What it really is, of course, is appetite. An Aquarius is always hungry, and sometimes that hunger can be satisfied by food, and sometimes food is just a placeholder, and, sometimes, an Aquarius has a hunger that can take over the world.

Really, though, an Aquarius is a lot dangerous, because the truth is always dangerous, and it's always weird, and it's always exciting, just like an Aquarius, who does things all the time that might make you scared if you were them (like that time I saw Styles stage-dive into a crowd of teenage girls who had... not enough in the way of upper-body strength to keep him aloft), but that don't make them scared, because somehow they just know they will be okay. An Aquarius will ride you around on their bike's handlebars, and encourage you to lift up your arms along with them as you start to descend a hill. Never mind that it's raining and the road is slick and slippery, raise your arms along with them. If an Aquarius is telling you to do something, you know everything will be alright. An Aquarius knows things. You can trust them.