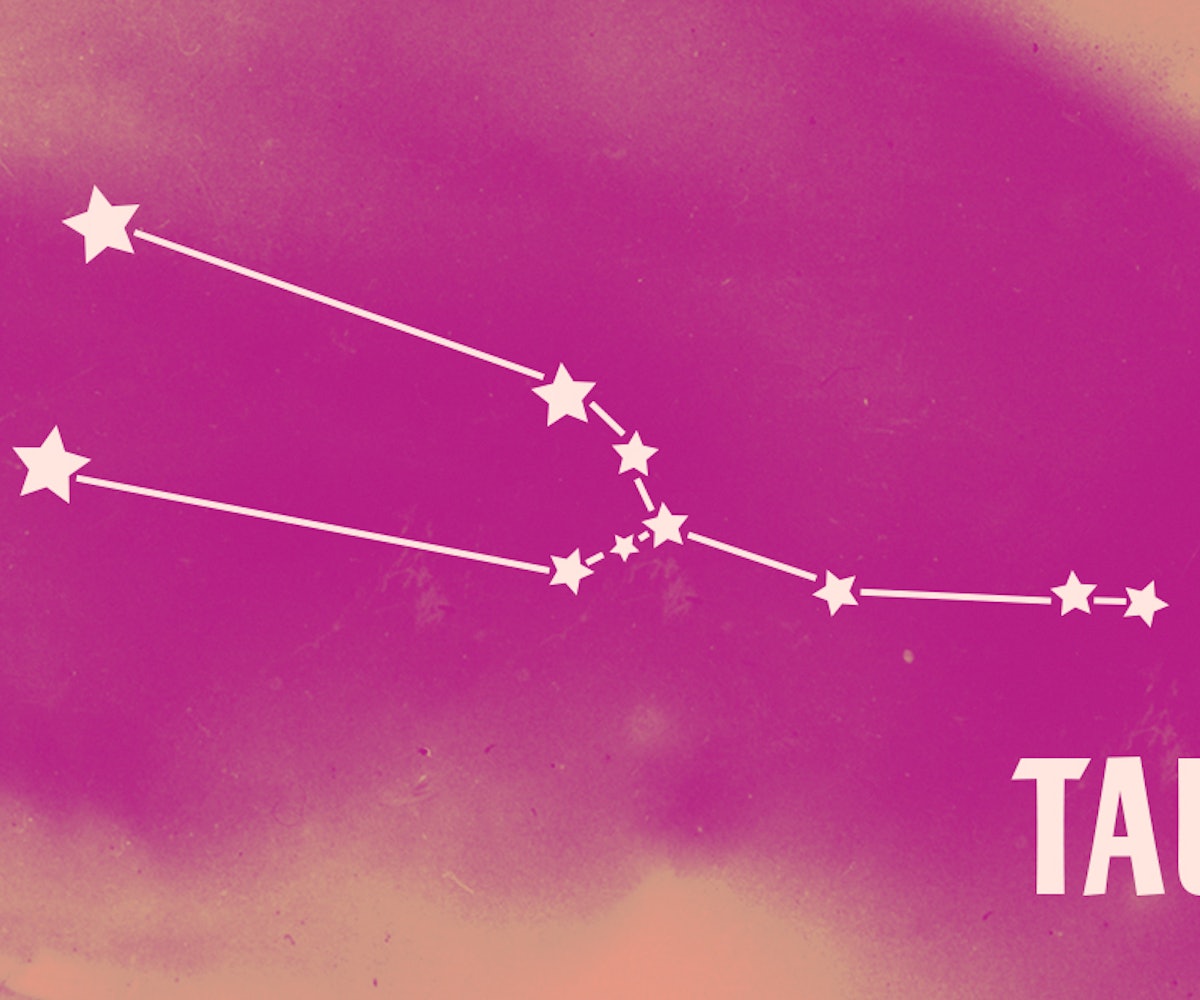 It's easier to spot some zodiac signs in the wild than it is others. A Gemini is pretty obvious, they're the ones who won't shut the f*ck up. Pisces? They're the moody ones — and, no, they're not off in a corner somewhere; they're being moody right in the middle of the room. But a Taurus is probably the easiest sign to spot — if you know what you're looking for. And what you should be looking for is someone who is an absolute boss, someone who has control over the entire room and can change everyone's mood with just a subtle lift of an eyebrow. (Or, in the case of famous Taurean, The Rock, a not-so-subtle lift.) A Taurus is just that powerful and is totally willing to use that power to get what they want. Because what they want? Is even more power, and also, like, to feel good.

Taurus is ruled by the planet Venus, which is named after the goddess of love and beauty. It's an earth sign, and is thus rooted in all pleasures associated with earthly delights. All of which is to say: A Taurus likes nice things, and they like those things in tangible manifestations. A Taurus, then, isn't much for concepts, they want results. You can sit with a Taurus and explain to them all that you're thinking and feeling, and they'll listen to you or whatever, they'll cock their head slightly to the side and stare at you with their eyes growing ever so slightly wider, and then you'll finish talking to them, and they'll ask you in a beautifully modulated voice: "So, what are you going to do about it?" And then, before you even get a chance to answer, they'll say: "Where did you get that lip gloss? I love it."

Because this is the thing with a Taurus, they like things they can see and touch. It's not that they don't care about what you're going through, it's just that they really don't care about what you're going through. OK, no, that's not true! They care! They do! A Taurus is actually often very empathetic, but their empathy can run out when you are more focused in wallowing in your problems than fixing them. Because they really want you to figure out how to problem-solve so that you can then spend your time with them talking about the things that really matter, like where you got that shimmering crimson hue, the perfect blue-red glassy gloss. And once you do talk about that, a Taurus is definitely going to go out and buy themselves that lip gloss, and then buy an extra one for you too! Because a Taurus is really generous.

A Taurus is a wonderful gift-giver. Many of the best gifts I've ever received in my life are from a Taurus, like a pearlescent, multi-chambered seashell I keep on display in my living room, and a bottle of perfume that came wrapped in a beautiful scarf. Everything a Taurus does is beautiful. They always smell good. Their skin is soft. They glow. And they're happy to share that glow. They'll tell you all their secrets: the stylists they visit, the stores in which they shop, the facialists they frequent. But they can't tell you their main secret, which is how they remain ageless.

Because, seriously, the most fascinating thing about a Taurus is that it's impossible to guess their age. It's like they have no beginning or no end, not unlike Venus who emerged from the ocean in a clam shell, like the goddess she is. Nobody knew who her parents were or where she came from. Rumor had it that she was created from foam. Foam! And not just any foam, but foam made out of the mutilated genitals of a titan. A Taurus, then, is an ageless deity whose very existence is a reminder that beauty comes from the destruction of the patriarchy.

But, yeah, here are some famous Taureans: Adele, Jessica Alba, Channing Tatum, Megan Fox, Penelope Cruz, Michelle Pfeiffer, Janet Jackson, Rosario Dawson, Gal Gadot, Uma Thurman, Cher, Grace Jones. Like, could you genuinely guess how old any of them are? Don't they just defy anything as reductive as being assigned a number based on how many turns around the sun they've taken? And by ageless, I don't just mean that you can't believe Cher is 71 or that Janet Jackson is 51 because they seem so much younger than that. I also mean that it's hard to believe that Adele is only 29 because she accomplished so much at such a young age. But it also makes a certain kind of sense, because though a Taurus is inherently ancient, they are also constantly in a state of renewal. It's a pretty chill state of being, to be honest, which is ironic, because a Taurus doesn't really have any chill.

Because, speaking of the no-chill thing, a Taurus is someone who is not infrequently described as a wunderkind or a rule-breaker. They are icons and iconoclasts, and they totally break everything along their way toward getting what they want. I mean, Taurus legend Barbra Streisand wanted to have new dogs that were just like her deceased dog, Sammie, so she cloned her dead dog. If that's not peak Taurus, I don't know what is. I just know I love it.

Of course... some of this desire to break rules in order to get what they want is not exactly what you'd call ideal. Taureans are prone to being fascists, with the most famous examples being, well, Hitler and Saddam Hussein; cult leaders, including Jim Jones (of the Jonestown Massacre) and Marshall Applewhite (of the Heaven's Gate cult); with maybe the most fascinating example of a Taurus with dictatorial leanings being Machiavelli himself, which, you know, of course, Machiavelli with his ice cold takes on whether it's more important to be loved or feared is a Taurus. He had no time for the bullshit placating of losers, just like a classic Taurus.

Yet another good example of a Taurus who once staked a claim to the motto "move fast and break things" is Facebook creator Mark Zuckerberg, who is, of course, an obvious Taurus because he's ageless and a boss and totally OK with maybe (probably) destroying American democracy in favor of his own bottom line. Zuckerberg is also an interesting case because while Taureans are usually notable for their aesthetic concerns, Zuckerberg is notoriously into... hooded sweatshirts and bad haircuts. But, actually, this is a sure sign of his Taurean self because making such deliberately bad aesthetic choices is still a deliberate aesthetic choice, and thus a clear indicator that Zuckerberg cares about how he looks, just not in the same way other people, with mirrors, do.

Enough about all those bad Taureans out to destroy the world, though. Yes, they're an example of the awful things that can happen when powerful people get everything they want; they should serve as warnings to the rest of us, sure, but every sign has at least a few bad apples (with some just having more than their fair share). Because the truth is, for every bad Taurus apple, there is at least one golden apple (not to be confused with the famed Apple of Discord presented to Venus/Aphrodite by Paris in an ill-conceived contest to determine who was the fairest of all the goddesses; this led to the Trojan War, and that was bad).

Anyway, hmm, my point... if I have a point... is to stress that Taureans like gold, and shiny, pretty things! Like gold apples. And lip gloss. And it's good to have people in this world who are concerned with not just the way things could be, but with the way things are. It's good to have people concerned with beauty and grace and getting shit done. It's good to have people who aren't afraid to clone their dogs because that's what love is sometimes, OK? And love has no rules, but if it did, they'd for d*mn sure be written by a Taurus, and you'd follow them and love them more for it, even as the rest of the world went to shit, you'd know that you'd be okay if you just stuck close to the Taurus in your life, and let them tell you what to do, even if it was drinking the Kool-Aid. You'd swear nothing had ever tasted so good.