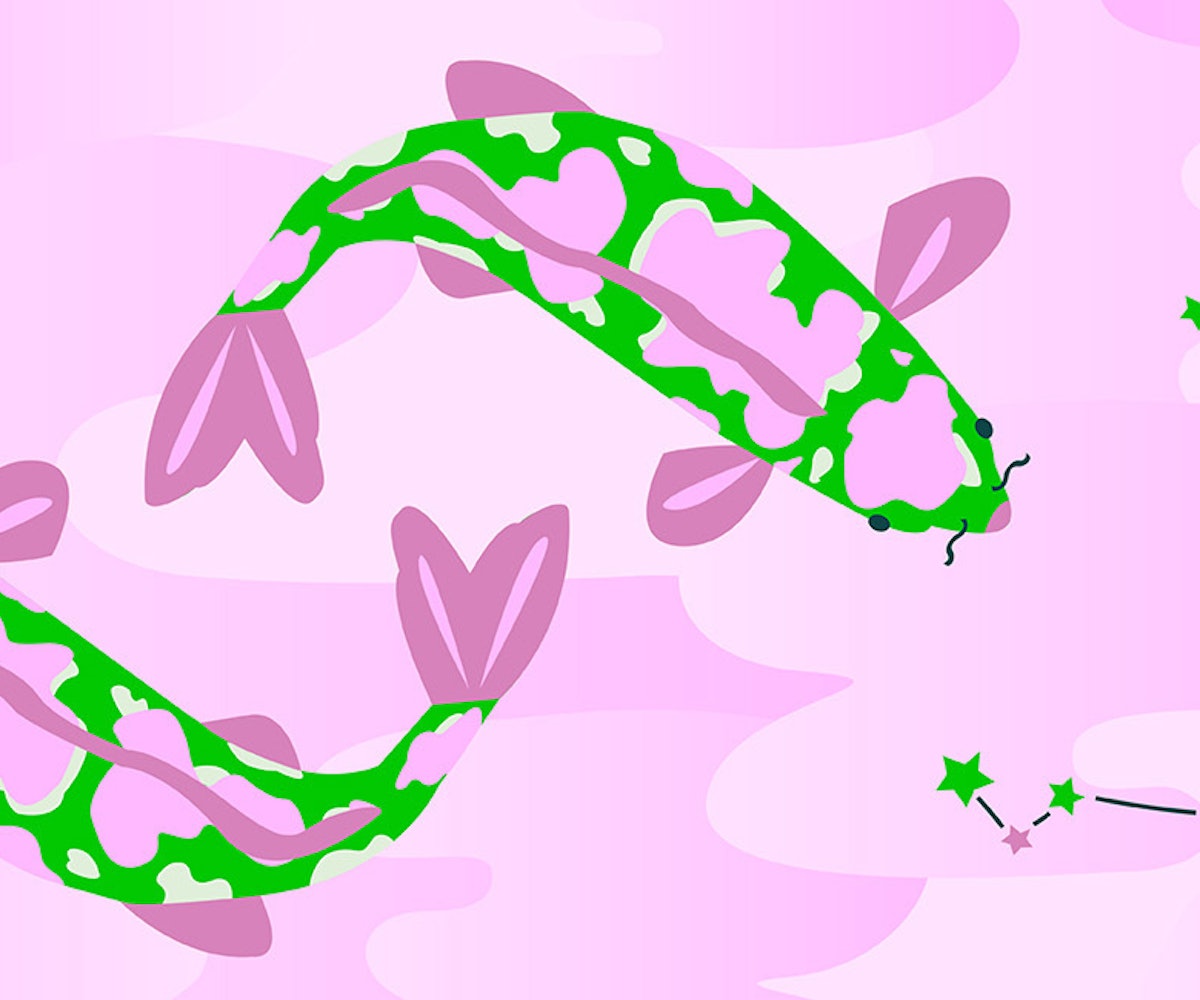 Okay, so, obviously, I don't really know what I'm talking about when it comes to astrology (see: here, here, and here), but that has never made me nervous when writing about Gemini or Capricorn or Aquarius, because I wasn't afraid that writing about these signs would lead to... intense text messages. Whereas now, with this piece, I'm pretty sure I'm about to get a bunch of messages from Pisceans questioning the many ways in which I've failed to capture the sign in all its fishy glory, and how, also, clearly, every word I wrote was directed at them, personally.

If you think I sound melodramatic right now, that I'm entirely overstating how sensitive a Pisces is, well, then you clearly don't know many Pisceans. But if you are nodding your head in agreement with everything I've just written, then you probably know at least one Pisces quite well, and have experienced firsthand their intense scrutiny regarding how you think about them. And if you are busy composing a text to me, asking what it is I'm talking about specifically, and how it pertains to our relationship, and why is it even a bad thing to take things personally, anyway, like you can't help it that you have feelings, the way a human should, and what am I, like, a robot or a sociopath or something?! Well, then, congratulations, because you are a Pisces. And, also, how did you get my number, because I try really hard to avoid giving it to anyone who's a Pisces because I've been burned before.

Does it sound like I'm being a little bit hard on Pisces? Like, maybe I'm not being fair to these intuitive, sensitive beings? It's possible that this is true! A Pisces would certainly think it's true. At least one (1) Pisces has probably even told me within the last 24 hours that I am being too hard on them. And this is probably not unfair, because I am a Gemini and I am a low-key psychopath, and the extra-sensitive nature of a Pisces brings that kind of thing out in me. It's like how when I was a kid, and I had a loose tooth, and I knew it would hurt for me to wiggle that tooth with my tongue and push it back and forth in my mouth, I still would do it. I would play with that exposed nerve ending even though I knew it hurt; I longed for that electric burning, the way it made my mouth taste like pennies. The point is, Pisces, you are as sensitive as an exposed nerve ending, and, to be honest, I kind of love you for it. Not least because it gives me a thrill to play with you.

Here is what I know about Pisces. Wait, actually, first, here is what Pisces knows about me: everything. Or, at least, they think they do. Or, actually, at least they feel they do. Because here is the thing with Pisces: They feel things. They feel things so strongly and so deeply that their feelings become facts to them. If a Pisces feels like something is true, then, in their minds it is true. Sometimes this can lead to incredible things. Nobody believes in themselves the way a Pisces does, and they tend to be true innovators in their fields. A Pisces is the imaginative icon of the zodiac, the one who moves the world forward into new and uncharted territory. Think: Albert Einstein, Steve Jobs, Representative John Lewis, Frank Gehry, Kesha, and Rihanna. Visionaries, all of them.

But a Pisces isn't just any kind of visionary. In fact, it's because their eyes so often deceive them that they rely on intuition to guide them through the more complicated parts of existence—and a Pisces has no problem finding complications to navigate. Even where other people might find nothing but smooth waters, a Pisces will find tempests and storms. But that's okay with them, because a Pisces will use all that energy, which is hidden to most other people, and harness it in the service of something bigger. They will use it to create the kind of things that you never would have imagined you needed, but once you have them, you can't imagine living without them. A Pisces loves to make you things. It could be as simple as a cup of coffee, or it could be the mug from which you drink the coffee, or it could be an entire dining room table upon which to rest the mug which holds your coffee. A Pisces will do it all for you—and the only thing they ask for in return is a bottomless well of love.

To a Pisces, love is liquid. It fills up whatever space it's in. And as a fish, a Pisces breathes liquid; a Pisces breathes love. They are the true romantics in this world. They are the ones who know that love isn't a fiery thing, but that love is a wave. And a Pisces is comfortable under that wave, diving beneath its crash, gripping the ocean floor and waiting until it's time to come up for air. But a Pisces is also comfortable on top of that wave, riding it right to the shore and then turning right back around, ready to ride it again.

But what is balance to a Pisces? What is balance to a person who feels things in such an extreme way that they create their own storms around them wherever they go? It is simply this: For a Pisces, balance can be found when they are challenged to be their best selves. Most people are not up for challenging a Pisces. Most people will get frustrated by the dreaminess of a Pisces or the hyper-sensitivities of a Pisces or the manipulations of a Pisces and just shrug their shoulders and walk away. But these people are cowards and are missing out! Or, at least, that's what a Pisces will say to them as they walk away. Also, though, that's what I'm saying to them too. A Pisces, I think, is worth the trouble. Like, holy shit, it is so much trouble sometimes, but a Pisces is worth it, because a Pisces is a beautiful pain to have.

Think of a Pisces as being like a prime number, as being the number 19. There is none of the easy beauty of one of those numbers that have tons of ways of being divided. Instead, the beauty is thornier; it has spikes. (If a Pisces were a flower, it would bloom out of a cactus; if a Pisces were an area in a national park, it would be the Cholla Cactus Garden in Joshua Tree, just as the sun sets and makes the whole place glow with the shining infinite colors of holographic laminate.)

A Pisces has hard edges, a Pisces is a metal pentagon; a Pisces is strong, and cannot be divided against itself. This can be difficult to deal with, the way a Pisces is so unyielding. A Pisces likes to think that they are just looking for a way to finally surrender, a place where they can feel comfortable enough to give in to their many psychic wounds, but a Pisces will be looking for that place forever and never find it in anyone else. Because the truth is that a Pisces gets so wrapped up in the externalities of the world, that they so often fail to fully appreciate their own strength and the way they can be a refuge for others, yes, but also for themselves.

All of this is to say, a Pisces shouldn't be looking for answers to who they are in something they read on the internet (especially not when it's written by a Gemini). Because a Pisces should already know who they are, or at least be able to feel who they are. And they should feel that whoever they are is all that they need to be. And so a Pisces should maybe just cut out the drama and ask someone they love and who loves them for a good foot massage and to accompany them on a midnight swim and, like, get away from the computer for a little while. It can't tell them anything they don't already know.