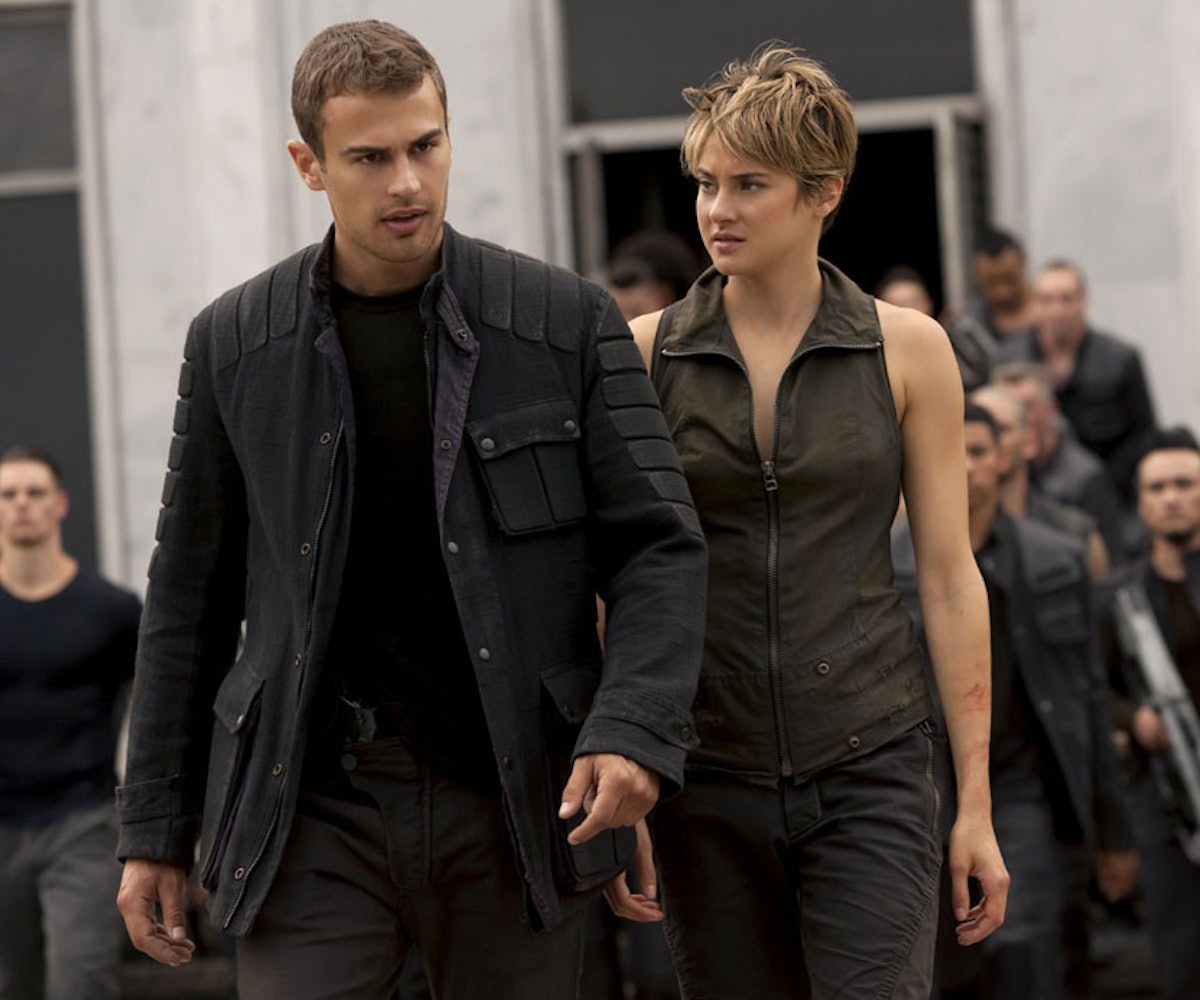 The second installment of the Divergent Series, Insurgent, is currently in theaters. As far as trilogy logic goes, the second act tends to set up the real conflict, highlight the “big bad” and cast the stage for the true battle to come. In filmic lore, it is, by all means, the darkest edition. Middle offerings don’t just raise the stakes in terms of the battle, but they also heighten our emotional connection to the protagonists—and their investment in one another. Author Veronica Roth has a carefully crafted narrative—the 26-year-old wrote the book over her winter break when she was at Northwestern—and a deliberate way of writing one of the most captivating parts of the series: The breathlessly intense relationship between Tris (played by Shailene Woodley) and Four (played by Theo James). Here, she talks about what makes their relationship so meaningful, and the challenges the characters face.

I’ve always thought of Tris and Four’s relationship as a strong friendship first and foremost—not necessarily a once-in-a-lifetime romance. When you conceive of romantic relationships as friendships, at their core, you and your partner are able to bear up under difficulty in a way that you can’t if what you really want is swooning romance all the time. The strongest real-life relationships I’ve seen are between people who respect each other, have inside jokes, and know how to fight without fangs. Friends, in other words. It’s not about soul mates or fated lovers, not for me, and not for Tris and Four.

The core of Tris and Four’s romance is an extension of what the faction system explores: choice. Tris and Four choose each other over and over again. They have different values and beliefs; they argue and yell and say things they don’t mean; they are even unkind and cold and relentless at times, but still, they keep forgiving and asking for forgiveness and reconnecting with what makes the other worthwhile. Many relationships break under the weight of loss or hardship, but Tris and Four thrive in stressful and intense circumstances. Their love for each other is deep; their respect for each other, profound; and their choice, free.

People don’t often describe love as effort—just the opposite—but I don’t find anything inherently unromantic about that idea. Effortless love often seems to come, in fiction, at the expense of freedom. The people involved are helpless in the face of their strong attachment, even if it proves harmful to both parties. But freedom, choice, commitment, forgiveness, honesty, and of course, vulnerability—those things are beautiful to me.

It’s in the realm of vulnerability that both Tris and Four face their toughest challenges. For Tris, the difficulty is with physical intimacy. It manifests in her “fear landscape”—her “exposure therapy”-esque encounters with her own deepest fears—because her exposure to it was so limited, growing up in Abnegation. She describes the rarity of seeing her parents touch, and as a result, intimacy has become this foreign, almost forbidden thing. Her body, too, is something she was never encouraged to look at or care for, so this contributes to her insecurity. Her fear of intimacy was also a way to expose the flaws of Abnegation—not only does that faction suppress the individual, but they also condition their members to disregard their own desires and drives, be they physical, emotional, or sexual.

In the past, I’ve spoken clumsily of avoiding explicit descriptions of sex on the page, but really I just try to pay attention to what feels gratuitous, and what doesn’t. That will probably change with each book I write—in the future, I might get a little more concrete. But for Tris and Four, it was enough that in the third book, when she undresses, he calls her body beautiful—and she believes him. The fear, overcome, and her choice to be with him, made free of fear.

Four, on the other hand, has a hard time trusting people (…to put it lightly). But he finds in Tris someone who can bear the truth of the abuse he has survived without resorting to pity or recoiling from his pain. She insists that he is a whole, complex person, not the summation of his “damage,” and ultimately, he believes her, too.

Together they fumble toward true intimacy, on all different levels. Personally, I love that Tris and Four are fearless in so many ways, but guarded about these things, showing that you can have vulnerabilities and insecurities and still be kind of a badass.

And that was the goal, the most important goal of mine—to ensure that one character’s strength didn’t come at the expense of the other’s. Certainly they each have stronger and weaker moments, but neither of them ever has to mess up to prove the other is capable. They are both capable.

This was particularly important to me because there is still a lot of pressure for young women—less now than there used to be, to be sure, but still, it persists—to act less intelligent or weaker than they actually are in order not to threaten men. But that’s bullshit. Truly strong people don’t need others to be “less” to make themselves “more.” They just lift each other up.

NEXT UP
Beauty
“Cold Girl” Beauty Is TikTok’s Most Baffling Winter Trend
Culture
Mowalola Teams Up With Bratz For A Daring, High Fashion Collection
Culture
In Cann’s Holiday Campaign, The Greatest Gift Is Being Chill
Life
NYLON Daily Newsletter: December 1, 2022