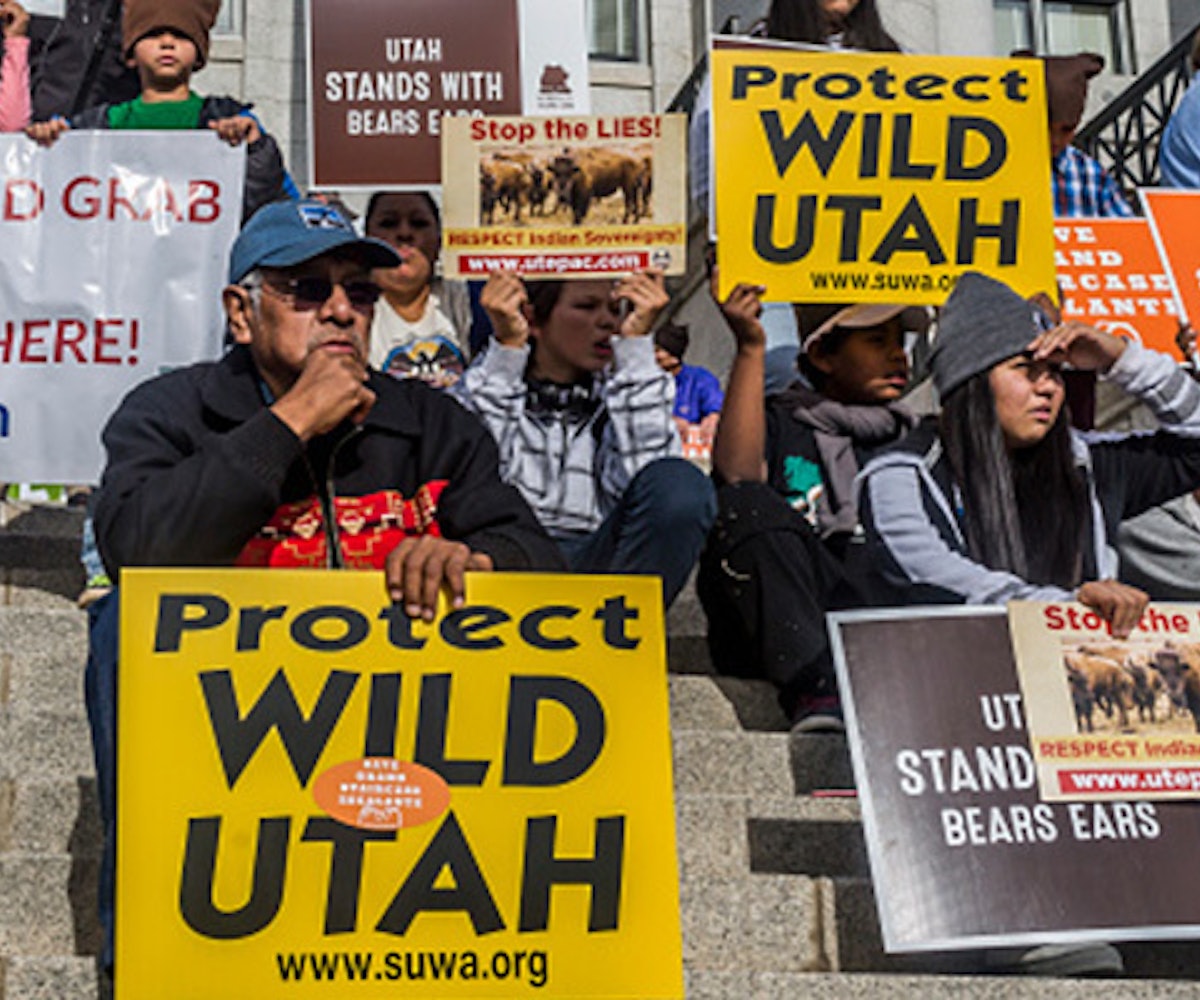 In an unprecedented move, Donald Trump drastically cut the size of two national monuments, Bears Ears and Grand Staircase-Escalante, by roughly two million acres. This will be the largest rollback of federal land protection in U.S. history, according to The New York Times.

The administration reduced Bears Ears National Monument by 85 percent and Grand Staircase-Escalante by about 50 percent, opening them up for development and exploitation. This decision could have huge ramifications, leaving millions of acres of protected lands vulnerable to mining, logging, and oil and gas extraction.

“Some people think that the natural resources of Utah should be controlled by a small handful of very distant bureaucrats located in Washington,” Trump said at Utah’s State Capitol on Monday. “And guess what? They’re wrong. Together, we will usher in a bright new future of wonder and wealth.”

After the decision was announced, outdoor clothing line Patagonia said it's suing the Trump administration. "Americans have overwhelmingly spoken out against the Trump Administration's unprecedented attempt to shut down our national monuments," Patagonia CEO, Rose Marcario, said in a statement. "We've fought to protect these places since we were founded and now we'll continue that fight in the courts." The company's homepage right now declares that "The President Stole Your Land."

REI also dedicated a section of its homepage in protest. “Despite the loss of millions of acres of protected lands this week,” the company wrote, “REI will continue to advocate for the places we all love.” In a blog post, it said the decision "undermines the integrity of the Antiquities Act, which 16 presidents from both parties have used to designate and protect national monuments over the last 111 years." During a "hasty, four-month review (from April to August) of 27 national monuments designated during the last two decades," REI said, "more than 2.8 million Americans submitted comments, with over 99 percent in favor of protecting them. Those voices have fallen on deaf ears."

Patagonia is just one of many institutions suing the Trump administration over this decision. Five American-Indian tribes, for whom some of the lands are sacred, plan to sue, as well. “We will stand and fight all the way,” Russell Begaye, president of the Navajo Nation, told the Times, adding that the U.S. government had already taken “millions of acres of my people’s land.”

A coalition of 10 conservation groups filed a lawsuit against Trump, Interior Secretary Ryan Zinke, and Bureau of Land Management Director Brian Steed, claiming it's illegal for Trump to revoke the land's monument status. According to the Times, environmentalists and some native nations believe rolling back on some of the monuments' desert landscapes will threaten approximately 100,000 sites of archaeological importance, including grave sites, ceremonial grounds, ancient cliff dwellings, and the surrounding ecosystem.

Those who will benefit from this decision include fossil fuel companies and Republican lawmakers who've been pushing for more local control. “He’s been sympathetic to the fact that we’ve been mistreated,” Senator Mike Lee of Utah said of Trump, “and I’m grateful that he is willing to correct it.”

If the institutions suing Trump win, it would mean presidents could continue to use the Antiquities Act to protect public land from development. But if Trump wins, it would give presidents the power to give away that land at will.