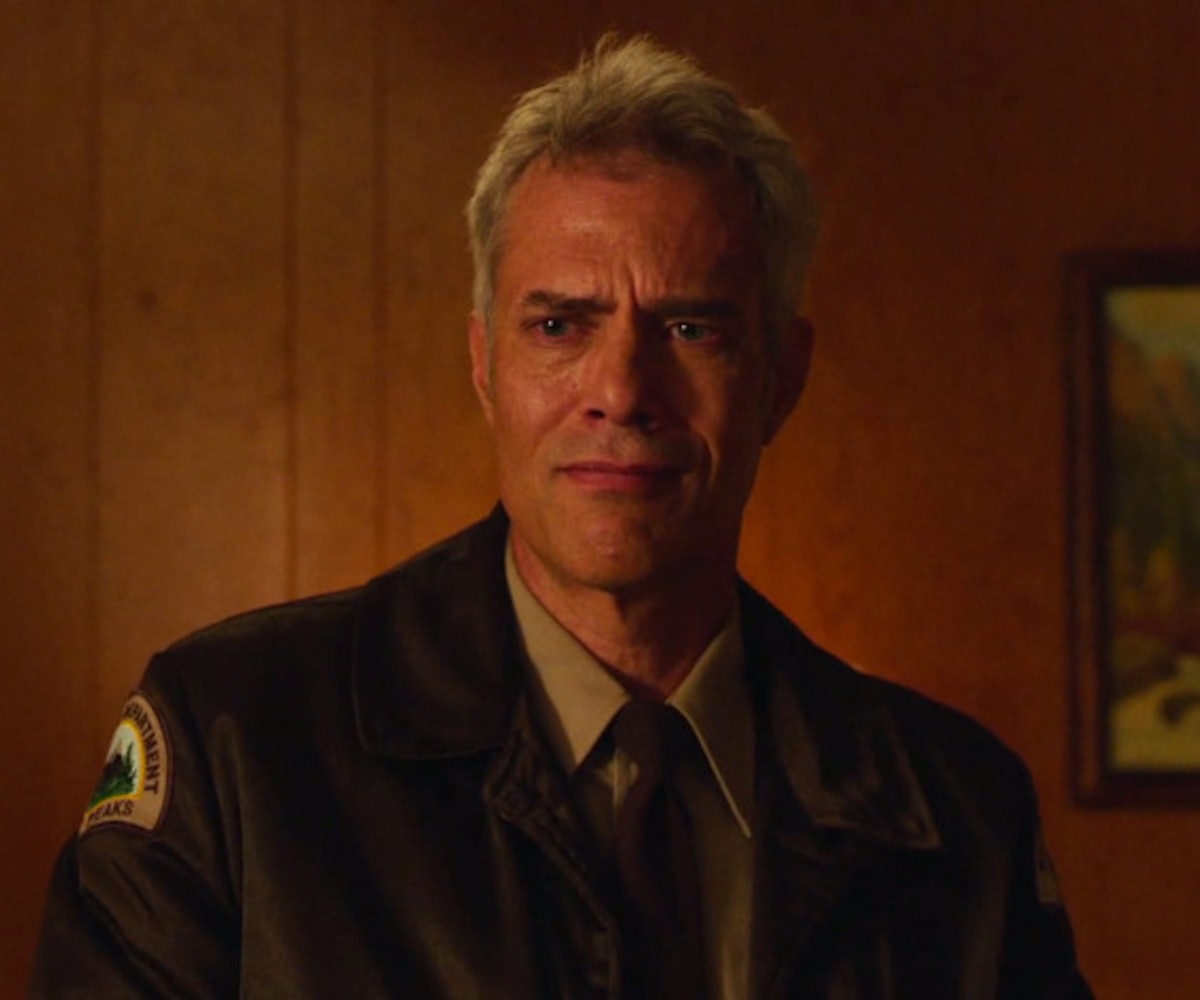 It is revealed in episode four of the new season of Twin Peaks that former bad boy Bobby Briggs (Dana Ashbrook) has become a cop. His hair has gone white—maybe all at once the way it did for Leland Palmer (Ray Wise) in the original series—and he moves in a solid, trustworthy way. Twenty-five years ago, when this show was first a brief sensation, Bobby used to gambol freely around town like a jazz musician riffing with his body; his presence was comic, sexy, and menacing, sometimes all at once. Given his push-and-pull relationship with his conservative father, it makes psychological sense that Bobby would eventually become a cop.

In the original pilot episode of Twin Peaks, many people in town burst into tears when they heard that homecoming queen Laura Palmer (Sheryl Lee) had been murdered, but not Bobby. When he was questioned by police about the killing, Bobby got rebelliously angry with them, and creator David Lynch used the young Ashbrook’s staring presence like a painter would use the color red. And so it is particularly poignant in this continuation of the series when the middle-aged Bobby sees a photo of Laura and begins to cry.

Ashbrook plays this scene as if Bobby is being attacked by emotions he couldn’t express when he was younger, but he also plays it as if Bobby is partly working them up and dramatizing the moment, an uncomfortable mixture that is very sad and very disturbing. This scene of the older Bobby crying and trying to cry is both ambiguously surreal and true to life, as the best parts of Twin Peaks always were.

The original run of Twin Peaks, from 1990 to 1991, was creatively tethered to a nighttime soap opera template, and its flights of surreal fancy took off from that solid base. Sometimes it played like a real soap opera and sometimes like a parody of a soap opera, and underneath all of that was an intuitive story about an abused girl acting out and trying desperately to transcend the terms of her abuse. There was nothing sentimental about this, and it is made particularly clear in the extremely bold tie-in book The Secret Diary of Laura Palmer—which was written in a whirl of creative intuition by Lynch’s daughter Jennifer—that Laura is fighting against evil but also drawn to it.

Maybe the saddest revelation in this new Twin Peaks is that Laura is still trapped in the Black Lodge and that she has been made to wait and age. “I am dead… yet I live,” she says helplessly. In the prequel film Twin Peaks: Fire Walk with Me (1992), Laura runs a gauntlet of tears, violence, terror, and more tears, but seems to come out the other end of it with agent Dale Cooper (Kyle MacLachlan), who puts his hand on Laura’s shoulder as if to comfort her in the ethereal last shots of the film.

But there is no comfort at all at the purgatorial Black Lodge 25 years later. Laura’s hair is shorter, and her eyes are hard with endured pain (they don’t seem to blink naturally anymore). She takes off her face at one point, and we see white light behind it, and she is seen screaming yet again as some force pulls her back up into the ceiling; all of which is extremely depressing.

Lynch and co-creator Mark Frost were given carte blanche creatively for this new Twin Peaks for Showtime, and it feels like this return to the show is emanating directly from Lynch’s subconscious, which seems to be a heavy and obscure and purely nightmarish place. Yet there are moments where Lynch and Frost seem aware that certain attitudes have changed since 1990, and this becomes particularly apparent in the awkwardly written scene where Lynch’s Gordon Cole character has a meeting with the transgender Denise (David Duchovny). Whatever the original intention was with Denise's character, Lynch and Frost both feel the need to have Gordon briefly address the prejudice Denise faced in the FBI in dialogue.

Lynch likes to slow down and stretch time in his work, and he also likes to present everything with an attempt at a neutral, non-judgmental tone. This works just fine in the scene where we watch Dr. Jacoby (Russ Tamblyn) methodically paint a group of shovels, or in a pillow shot of a train moving at night. But using the same slowed-down rhythm in the scene where Cooper’s evil doppelganger tortures and punches and then kills a redheaded female associate named Darya (Nicole LaLiberte) feels very different, and Lynch seems to know that because he cuts twice to her dead body on the bed as if to guiltily say, “Look at this beautiful life destroyed.” (Though maybe Lynch thinks he is beyond such human reactions. Maybe he wants to see her dead body like an alien would, as purely sculptural?)

We don’t know much about who Darya is or was, and we also don’t know why LaLiberte has to play this painfully extended murder scene in just her lacy pink underwear. (Couldn’t Lynch’s fabled artistic subconscious have shown both actress and character some shred of mercy and let her wear some clothes?) Similarly, there are two other young female characters who have to get naked for the camera in these new episodes for no clear reason. If it seems stuffy or censorious to point this out, get back to me when young male characters also get naked for no clear reason on this show.

If there are genre elements in this new Twin Peaks, they come not from nighttime soap operas but from the less friendly horror and sci-fi genres. The new characters are not particularly inviting yet, and none of them can remotely compete with a glimpse of the elderly and ruined Sarah Palmer (Grace Zabriskie) stranded on her couch watching a TV nature program of animals devouring each other, or the two scenes where Catharine E. Coulson’s Log Lady phones the police station to offer a clue. Coulson was obviously dying when she shot these short scenes. (She died in 2015.) Her hair is gone, and her voice is frail as she finally says, “Please… let me know what happens.”

These images of Coulson transcend anything from Lynch’s imagination because they assert the humanity and fragility that he is often trying to skirt or avoid or laugh at. This is a new hard and cold modern Twin Peaks without much humor or eroticism but lots of sleek fear and dread. It feels as if Lynch is like the punishing God of the Old Testament here, exercising his spleen and wrath and indulging only a distant and aesthetic curiosity about people.