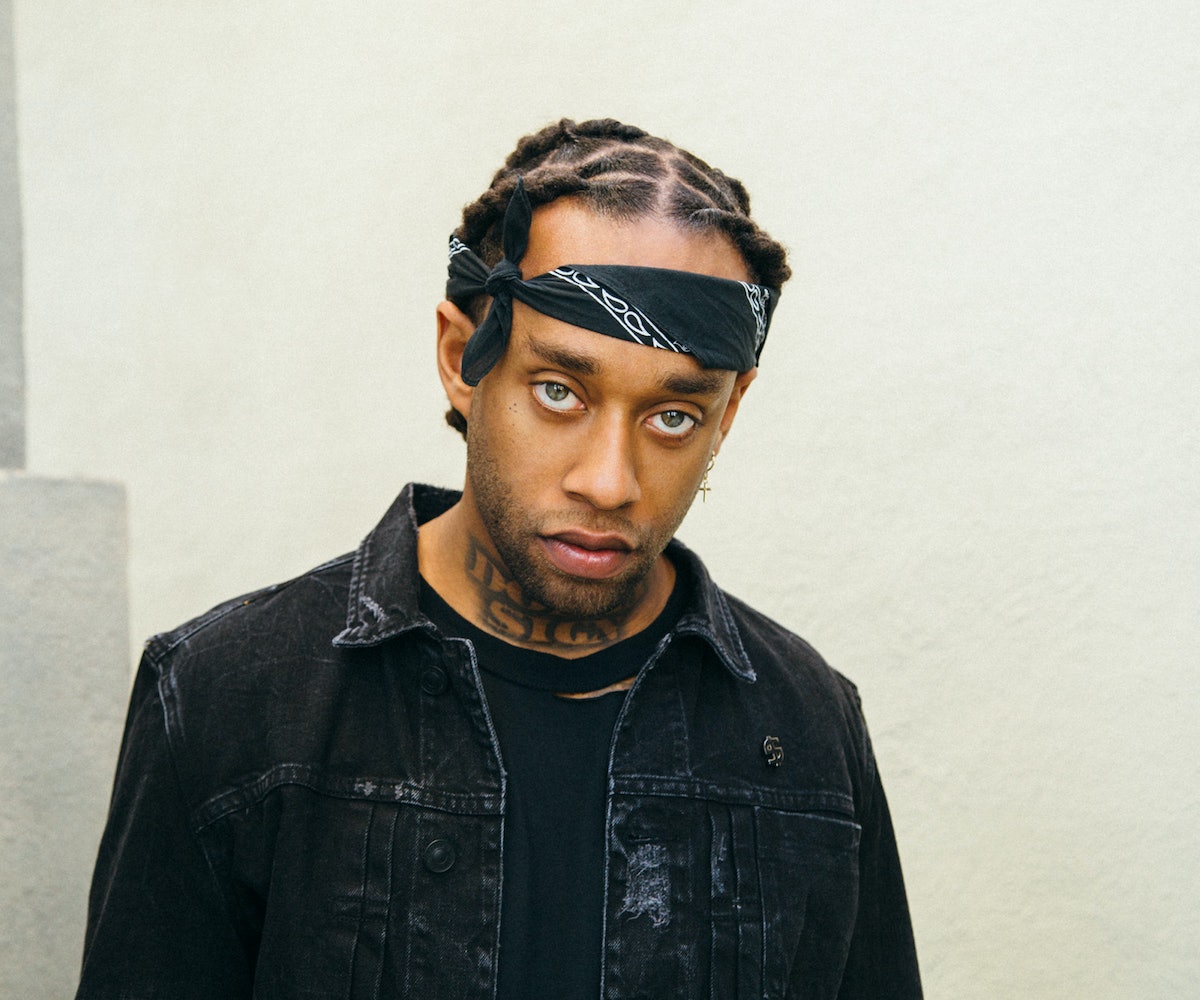 Since dropping his DJ Mustard-produced single, “Paranoid,” a song about the anxiety that comes with having a lover and mistress cross paths at a nightclub, Los Angeles native Ty Dolla $ign has been blowing up. In the wake of the massive success of Fetty Wrap and The Weeknd, artists who croon graphic ballads of drug and sexual excess, apathetically taking in their surrounding luxuries like bored emperors, Ty has fit right into this new, nihilistic landscape. He followed up the success of “Paranoid” with last summer’s club banger “Or Nah,” which featured an extraordinarily popular remix with Wiz Khalifa and The Weeknd, and with over 135 million views on YouTube, solidified Ty Dolla $ign as one of R&B's biggest stars.

But amidst his meteoric success, Ty Dolla $ign, born Tyrone William Griffin, Jr., is struggling with the incarceration of his younger brother and collaborator, Big TC. His debut album, Free TC, features his younger brother's vocals, which were recorded from prison where he's facing a life sentence for murder, a conviction that Ty Dolla $ign is convinced is false. We recently spoke to the burgeoning star about trying to enjoy success without his brother, how he's trying to free him, and why God and religion do not go hand in hand.

A few months ago, I saw you perform with Action Bronson. It was a really great set. What goes into making a successful live performance?

Connecting with the people and making sure they’re fucking having a good time. You want them to leave thinking, “That was the best night.” That’s what I try to do.

What goes through your head when you’re watching all these people dance to your music?

When you’re making a song, how do you differentiate between what’s R&B and what’s straight-up hip-hop vocals?

When you look at all the Ty Dolla $ign [songs], there has never been a straight-up hip-hop song. I’m a big hip-hop fan, and I love Biggie and all the hip-hop artists like Lupe Fiasco, but my stuff is more like straight-up R&B. It’s not R&B that we’re used to; it’s definitely some new shit, but I’m more of a singer than a hip-hop artist.

Tell me a little bit about your songwriting and music-production process.

I just go on the road and I make magic, and any more than that everyone would copy my shit. I got magical powers.

What’s some advice from a business standpoint for someone first coming into the music industry?

Your brother was incarcerated for a crime that you believe he did not commit. How did this specific story and your relationship manifest itself into your newest album?

Basically, what was happening was our careers took off. I’m getting hella money now, I’m driving nice cars, I’ve got a big crib, I can get all of the women that I want, but my brother’s not here to share it with me. So I’m never really able to have as much fun as other artists do, because I’m trying to figure out how to get my brother out of his situation. I can’t really turn all the way up without my brother. So, I’m trying to get all the awareness out that an innocent man is behind bars. My brother is not the only one; before I was born, this was an issue. I’m just trying to bring awareness to all the kids out here by saying this is going on, and we need to put a stop to this shit. What we see every day: the police brutality, mass incarceration, and racial and social injustices. That’s what I’m trying to do with my power, rather than using that money to buy more jewelry.

How do you think the prison industrial complex can be reformed?

By just making people know about this shit. The more I do, then maybe it will change one day.

What has been the collaboration process between you and your brother?

As far as on the album, basically his songs [from prison] got out on the Internet. He had been with a cellmate and the cellmate was beating on the bed and beating on the walls and my brother sang and rapped. I just took that off of the Internet, put it into Pro Tools, and played some shit over it and put some vocals over it. Now, we have my favorite song on the album, which is called “Miracle.” It meant the most to me with the lyrics and what we’ve been going through. Putting our music together shows they can’t stop us.

It sounds like a very powerful moment, to hear your brother singing on your own album.

He’s also on interviews throughout the album. I’m telling him what’s going on and he’s telling me what’s going on, and that’s what the album is: It’s his struggle and my struggle. Hopefully, everyone can struggle with us.

Collaborating with Ye was like, “Wow, is this really happening?” God is great, man, I’m glad he just saw. Working with Kanye was like, “I can’t believe this is happening,” but like I said, magic is magic, so I’m glad he could fuck with me. Shout out to Ye.

What’s an aspect of the music industry that Diddy has taught you?

Probably just like not letting everybody listen to what is going on. He is quick to tell someone, “Yo, let’s go in another room real quick,” and then we’ll start talking in private, because that’s what it’s all about. And not giving away everything. Shout out to Diddy.

If you could take shots with anyone in history who would it be?

How much animosity have you encountered from people trying to rip you down?

It’s definitely up there, but at the same time, I don’t want to give those people any attention. They didn’t believe, and they didn’t want to see me get off, so now I’m not going to talk about them and make them famous.

Do you believe in God?

I definitely believe in God. Thank you God, for everything that’s happened and for watching over Earth.

How do you specifically define your concept of God?

God is like who created everything, you know? Thank God. You know this doesn’t come from nothing—whenever they try and sell me the whole scientific thing, the Big Bang thing, “Oh, here’s the stars. Here’s the Earth.”—that’s bullshit and I’m not buying it. I definitely believe that my parents created me, and somebody created the Virgin and the baby. It was God, and every country you go to, different people may believe in a different God, but it’s all the same God. Everybody’s heard the story and made it work for them. Religion is a whole different thing. Religion is a business. I’ve been a part of several churches, and I’ve learned to not get your feelings into it, because it’s a business. The pastor drops their leaves and the people give them their money. I definitely believe in God and everybody should, because God made us all.